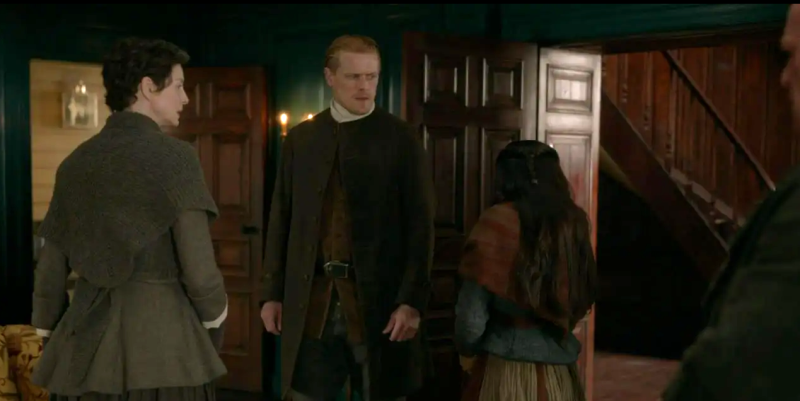 Writing these reviews is not always easy. I generally have to watch the episode three times, which can sometimes be painful (I’ve reviewed other shows besides Outlander, and believe me, some of them have been WAY more difficult to get through). Frequently, though, my opinion changes as I rewatch – usually for the better. A rewatch often brings out points I missed the first time, since I’m always eager for the story and how it will play out. And points you think were missed, glossed over, or poorly done often turn out to be subtle, leading, and nuanced.

This week, I was as excited and nervous as all of you were, going into my first watch. As a reviewer, I get the episodes quite a bit before you do – in this case, about a week and a half ago. I didn’t anticipate as much being included in it as there was – and boy, there was a lot! With only eight episodes to this season, though, it’s not surprising that this much of the Malva storyline was included. (And a big problem with getting them so early is that I have nobody to talk to about the episodes…) But unfortunately, this week, the rewatch moved my opinion a notch farther down. While there were some amazing performances, the episode was rushed, actions and emotions were abbreviated, scenes could have been improved with a little more time.

The first point that this is truly an issue is when Claire is sick. The speed that they rushed through this really eliminated showing how serious the illness was, and how torn up Jamie was feeling. If you didn’t know the story, you may not have had a real sense of how close to death they all thought she was. She comes out of it after a week, and it’s been like not much happened! Even Malva’s statement that Jamie was “grieving so” felt false because we didn’t see it. It also denied Sam Heughan a great opportunity to showcase his talent. The haircutting didn’t even feel like a big deal. The scene really should have been equal in intensity to the snakebite and recovery scenes from season 5, perhaps not as deep as the loss of Faith in Season 2, but it was glossed over, shallow, and fairly emotionless.

The only part of this that I liked was Jamie and Claire’s discussion about her “qualities” – that was sweet, and one of the very few times in the series that they say “I love you.” “You were always bolder than was safe,” Jamie says to Claire. “Now ye’re fierce as a badger. Proud as Lucifer.” “So I’m arrogant and ferocious,” she laughs to him. “That’s hardly a catalog of womanly virtues.” “Ye’re kind, too,” he goes on. “And verra clean. Though ye’re no much of a cook.” This did remind me of the snakebite scene in one way – Jamie had told Claire he knew he was dying, because she was sweet to him, but when it wasn’t so serious, she scolded him. Here, it seems he tries to do something similar – but after the danger has ended.

‘Tis a great comfort, to see the sun come up and go down. When I dwelt in the cave, and then was in the prison, it gave me hope to see the light come and go, and know the world goes about its business. I get the same feeling, Sassenach, when I  hear you rustling about your surgery, rattling things or cursing to yourself. If you were no longer there, or somewhere, the sun would no longer come up or go down.

Jessica Reynolds is absolutely the mistress of the side eye, queen of the sly half smile. As Ian said, “she’s so beautiful” – and that makes it even more difficult to accept the damaged soul underneath the glossy black hair and dainty features. But this tiny little actress packs a HUGE punch, and WOW. You want to tuck her into your pocket and carry her like a little doll – until you realize she’s more like Chucky than Barbie. Her performance really tells you that Tom Christie had the right idea when he tried to beat the devil out of her with his belt (and no, I am not advocating corporal punishment).

She was very convincing in her accusation to Jamie – she knew where she couldn’t go (didn’t accuse him of rape), she had all her information in hand, and if you didn’t know Jamie’s character better than that, who would not believe her?

Mark Lewis Jones, as Tom Christie, is also amazing. I think it’s pretty obvious that Tom didn’t really believe Malva, and his respect for both Claire and Jamie kept him from responding the way Allan did, with anger. But his resentment of Jamie’s success, the humiliation of the situation, and Malva’s convincing details, kept him from just telling her outright that the entire idea was ridiculous. I’m sure that he would have spared Claire the grief he knew was coming once the words fell from Malva’s mouth if he could have stopped it.

The scene in the barn, when Jamie goes to find Claire after she runs out of the house, was a potential worry. Claire’s speech about “not belonging” was used in the trailer for the season. At that point, we didn’t know what it referred to, and worried me that it could go the way of season 3, where Claire wishy-washy’d her decision about coming back to Jamie (that never had an appropriate resolution, by the way…). But here, she was affirming her belief that there was no possible way Jamie could have betrayed her like Malva said. And Jamie, not wanting to have anything she could come back to later, tells her the truth – finally – about Mary McNab. It was important to tell her at this point so if it ever did come out any other way (not overly likely, but hey, a trip back to Scotland isn’t completely out of their picture), it wouldn’t be one more thing that Jamie didn’t give up, like his marriage to Leoghaire.  I know there are some fans who feel that that incident, seen in season 3, was a betrayal – but as he explains it, Mary gave him a small thing – and not a small thing. That’s the genius of Diana Gabaldon – taking an intimate act and making it more of a benediction, a blessing, rather than sex, and it helped keep his body and soul together while at Ardsmuir.

Their love is stronger than anything. ❤️ #Outlander pic.twitter.com/QyEqTlGLFv

Claire’s ether dependency is a major misstep in a generally excellent season. No matter how it’s resolved, it is a blight on the writing. Obviously and understandably, she was damaged by the attack, and having two characters drinking too much in a season wouldn’t be good. But the ether use has created way too many awkward moments, been very out of character for Claire, and been used as an easy avoidance technique here. Claire sees Malva approaching and dashes inside her surgery – she locks the door, and uses the ether to knock herself out so she doesn’t have to have the face-off she knows is coming. What could Malva have to say to her? They’ve already had one, and it wasn’t pretty. Could Malva have been coming to apologize, to ask for Claire’s help in getting out of this situation, to confess her sin and reveal the real father of her child? Claire will never know – it seems that the killer followed the young girl, and there was some kind of confrontation in the garden. We could speculate that Malva told the killer what she intended to do, and the killer, fearful of being revealed, took her life. And now, Claire will live with the knowledge that she could have saved Malva by being available. How many of us, however, could have been that forgiving to allow her that confession?

And so, we’re shown again that Caitriona Balfe has grown to be a powerhouse actor – so many emotions in that scene in the garden! Hysteria, rational enough to do a battlefield C-section, grief, anger – no matter how she felt about Malva, and no matter that their relationship had been broken to bits, Claire was shattered to realize that this young girl she loved almost as a daughter was dead. One thing, though, would have made this infinitely better – and it is only on the writers, not Caitriona. In the book, the baby is hanging on to life when Claire pulls it out of Malva’s womb, and has the “blue aura” that Diana first described when Master Raymond healed her after her miscarriage of Faith. This bit of supernatural detail was not used in season 2, but should have been; and then we could have seen it here. After all, this is already a show dealing with some fantasy elements, so why not add that? We’ve got time travel, Otter-Tooth’s skull, Rollo leading Jamie to Claire during that same scene…. why was the decision made several years ago to eliminate this bit?

Overall, the episode had top notch acting, but definitely crammed way too much into it. And while I understand – with only eight episodes in this shortened season, they needed to move quickly through the story to get to a reasonable place for the season’s end. But the episode was already over an hour – they couldn’t have added five more minutes? Or reworked or lengthened the next two to push a bit into those? Of course, we don’t know what will be in the last two (and remember, there is no episode this coming weekend, but on April 24 and May 1, we’ll get the final 2 of the season) – I hope they can wrap up this terrible ether story arc, and move us to a point that makes sense for a break.

Join us on Tuesday nights to talk about the current episode – 9 pm eastern/ 8 pm central/ 6 pacific! Click here to listen and to get our call-in phone number (you can listen to all past episodes at the same link).