By: Bri
Sonic the Hedgehog

The first Sonic the Hedgehog movie released at a very strange point in time. It was right before everything in the world shut down and was probably a lot of people’s last movie they saw in theatres beforehand. Because of this, Sonic went on to be nominated for, and win, some awards that it likely wouldn’t have gotten if the other movies slated for that year had come out. It was also subject to a lot of ridiculous controversies because of the character design and for other strange reasons. Despite the challenges, controversies, and strange timing, the original film got a lot of love. With the cliffhanger ending and the adorable heart behind it, fans wanted more. Of course, it got a sequel pretty quickly and on April 7th that sequel was released!

I definitely enjoyed the first film. It was one that I thought everyone from all walks of life would love and it did a great job of introducing Sonic to a new generation. I was happy when they announced the sequel. Of course, with it being a sequel I was hesitant that it wasn’t going to be as good. I was pleasantly surprised by Sonic the Hedgehog 2, but of course, it wasn’t perfect. There were some weird choices made and some downright boring parts, but I think that this movie has such a good heart to it that a lot of this can be overlooked.

I loved the sound design. The movie had sounds from the game hidden so wonderfully that fans will immediately hear them and perk up. I think they made sure to integrate the sounds into the movie in such a way that made it so it wasn’t a jarring out-of-place sound in the real world. There were some strange CGI moments and there was one scene where James Marsden’s voice didn’t quite match up with his mouth movements, but those whoopsies aside I think that this movie will be one that everyone will love.

Speaking of James Marsden, can we talk about how great he is in this? He had a much smaller role this time around, but he still brought so much fun to it. Having a smaller role made his character even more endearing. There were still a few moments that felt a little off between him and Sonic, but overall he felt more natural. He and Sonic have such a sweet relationship and I really loved the theme that these two carried throughout the movie. I’d like to see more of them just doing everyday things together!

And of course, let’s not forget about Jim Carrey. Holy crap! It still feels like he’s portraying himself, but it’s oh so good. There were some ridiculously funny moments with him and the characters. I also love it when they throw in adult humor for us to pick up on. He was a really big show stealer this time around and I loved the interactions he had with everyone around him. His team-up with Knuckles was a lot of fun and I liked the quips he made and how he went even more off his rocker after being stranded on the mushroom planet.

Knuckles and Tails were also great additions to the movie. Tails is adorable and man did I want to pet him the whole time. The love he brought to Sonic was so sweet and I liked seeing Sonic find that friend that he really deserves. Idris Elba as Knuckles was way better than I could imagine. He was funny and dim, but also so sweet. The tragic backstory he shared made everyone feel for him and definitely made him the sympathetic “villain” that everyone loves. I definitely can’t wait to see more of these two in the future. 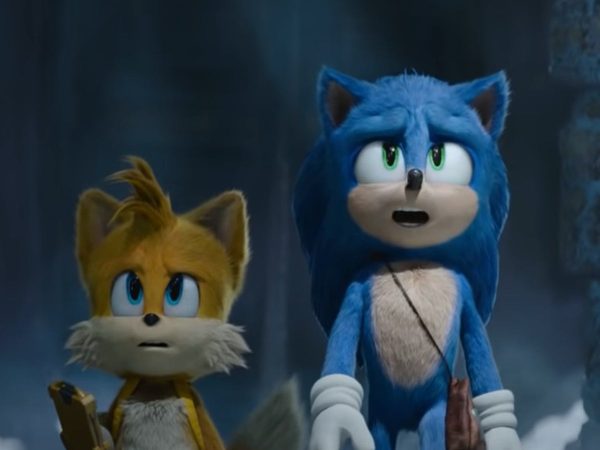 Here’s the part where I get into spoilers, so please skip to the next section if you haven’t watched it!

Ok, so the worst part in this movie was when Sonic and Tails went to the bar/pub thing in the snowy mountains. I don’t really know why they threw that in there. It had nothing to do with the movie and the dance battle felt so stupid and forced. Sure, it’s a kids’ movie, but still. Plus, how did Sonic and Tails get all of the clothing they used to disguise themselves in? I don’t really know why they put this scene in there, but it was definitely my least favorite thing in the entire movie. Plus it added on 30 minutes they could have cut out. Even the maze scene with Knuckles and Robotnik was fun, but again the mountain scene and the wedding were a bit out of place.

The wedding also didn’t make much sense because how did G.U.N know that Sonic was going to show up? Maybe they thought that he was going to just be at the wedding and they could get him immediately? I don’t know, it was a bit weird. But again, kids’ movie! The wedding and pub scenes made the movie feel a bit too long, but it didn’t seem to make any of the kids around me any less attentive.

Speaking of, there is nothing more fun than hearing the kids, and adults, in the audience lose their minds over things. When the big reveal in the fight with Dr. Robotnik took place, everyone went “YESSS” and the energy in the theater was off the charts. It was really cool hearing everyone get so excited about that. Plus, that was an awesome reveal. Once Sonic, Tails, and Knuckles teamed up the movie got a lot more exciting.

I highly recommend that you go see this movie. I think that people of all ages will love it. There were only a few moments that they referred to the last movie, so honestly, even if you haven’t seen the first one you could watch this one and be fine. They did a great job bringing Knuckles, Sonic, and Tails to life and only had a few minor strange CGI scenes. With the exception of one area, the pacing was good and it seemed to keep the kids in the audience attentive the entire time. As a long-time Sonic fan, I think Sonic the Hedgehog 2 is definitely true to the heart of the Sonic games. It is a movie that everyone should watch because of the humor, the action, and the charm.

Oh, please stick around until after the fun credits!!