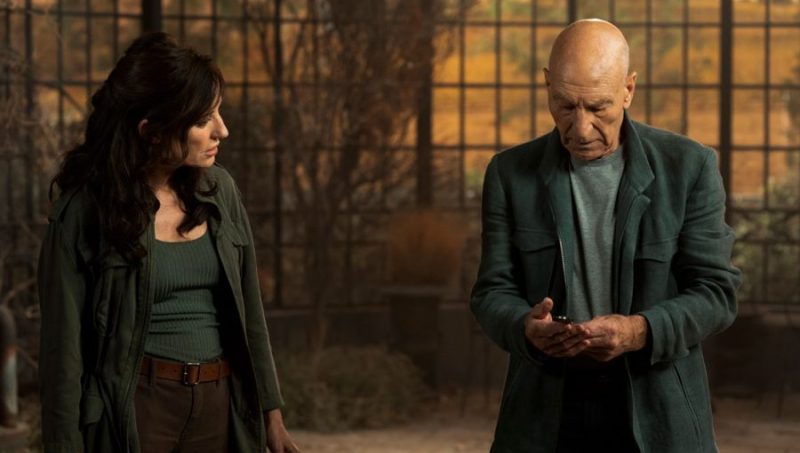 It’s clear to me that Dr. Agnes Jurati is the MVP of season two of Star Trek: Picard. The good doctor, racked by self-doubt and loneliness, somehow stumbled into a relationship with the Borg Queen, who it must be noted shared many of those same feelings, and completely changed the dynamic of the Borg-Human relationship. Not bad for a woman, or women, who seemed destined to share a soul that they would battle for control of.

In the end, it would be Jurati’s humanity, and ability to tap into what makes humanity great when we allow ourselves to explore it, that turned a very dark and ominous cloud into a new rainbow-laden sky with the Borg fully on-board. The Juraiti-Borg Queen dynamic has been interesting from the start and only built in terms of intensity and relational similarities as things progressed.

Even as the Queen seemingly was ready to spring assimilation on the universe a full 400 years before it was supposed to happen, and kill Seven, it was Jurati that turned the tide of battle and the mindset of the queen. Not with weapons, threats or blackmail, but with the simple ability to understand and assimilate their shared struggles and loneliness.

Agnes Jurati and the Borg Queen as one in Star Trek: Picard.

And with that, the Borg Queen is convinced that assimilation to find perfection shouldn’t be her life’s work, but the celebration, cultivation and success of those who are imperfect. It was a pivot point for the Queen to see the value in those that may appear valueless to others and to find perfection in their struggle to fit in. Sounds a bit familiar to our times, doesn’t it?

It was a major power move by Jurati and one that certainly saved billions of lives from a futile life of mindless servitude. Allison Pill and Annie Wersching brought Jurati and the Queen to life, then upped the wager on an almost weekly basis. They were antagonists who understood each other more than they wanted to admit, and that understanding eventually trumped the natural impulse of the Queen. Jurati, in that mental tug-of-war with the queen in one body, eventually found herself in that relationship and helped the Queen rediscover herself on some levels.

Raffi and Seven after the Borg Queen/Jurati saves Seven’s life.

It was a big play and a huge moment for Jurati, who has routinely shown up big this season when it looked like her first impulse was to duck, cover and cower. She was tough, strong and connected even when she seemed weak, ineffective and at loose ends. Yup, for my money, Jurati’s been the MVP this season with a series of great moments and a chemistry with the Borg Queen that was humorous even as it was intense. Congrats to Pill and Wersching for performances that shone brightly whenever they were on the screen. Fun and adventurous and demonstrated once again that this franchise will explore dark areas of not only the mind, but of how we are living our lives today.

And with that, the Jurati/Borg combination takes La Sirena and flies off into a new and inclusive sunset. Trouble is, that leaves the rest of the troops stuck on 2024 earth. Of course, does that mean they will be able to get back to the right time or are they just going off into the wild blue to start things anew? Interesting comment by Jurati/Queen before departing, wasn’t it. One Renee must die and one must live. A nice riddle, indeed.

Perhaps what we are looking at here is someone sacrificing themselves to throw Q and Soong off the scent, thereby allowing Renee Picard to complete her Europa mission and sending the future into its correct lane. That’s the only path I can see at this point. If I had to pick someone to sacrifice, it might be Tallinn, who has been overseeing Renee’s life as a “Watcher”. The ultimate caretaker moment would be sacrificing a life for your charge. Just a thought to keep in mind as we race headlong into the season 2 finale.

Meanwhile, back in Los Angeles.

The hunt for Picard and the rest by the Borg Queen’s assimilated henchman through Chateau Picard was fun, hence the episode name of “Hide and Seek.” There was shooting, skulking, defeating and lots of running around. There were secret passages and a bunch of interesting moments, including being confronted by Soong, who has a head filled with ego-gratifying flights of fancy, courtesy of Q.

Love Soong’s massive ego and complete disregard for humanity finding its own way in the stars. It’s an interesting example of how tyrants can appear so quickly. In the end, Soong’s ambition and ego were always front and center. He’s an unlikable human being – perfect for someone like Q to cut a deal or manipulate.

I’ve thought that this season has had some tremendous moments exploring mental illness and the impact it has. Those closed doors I’ve been talking about, once opened, offer an interesting look into the life that has been lived in their shadow. Behind Picard’s door was a mother with mental illness who, sadly, chose to take her own life, something Jean-Luc believes wouldn’t have happened if he hadn’t opened a single door. 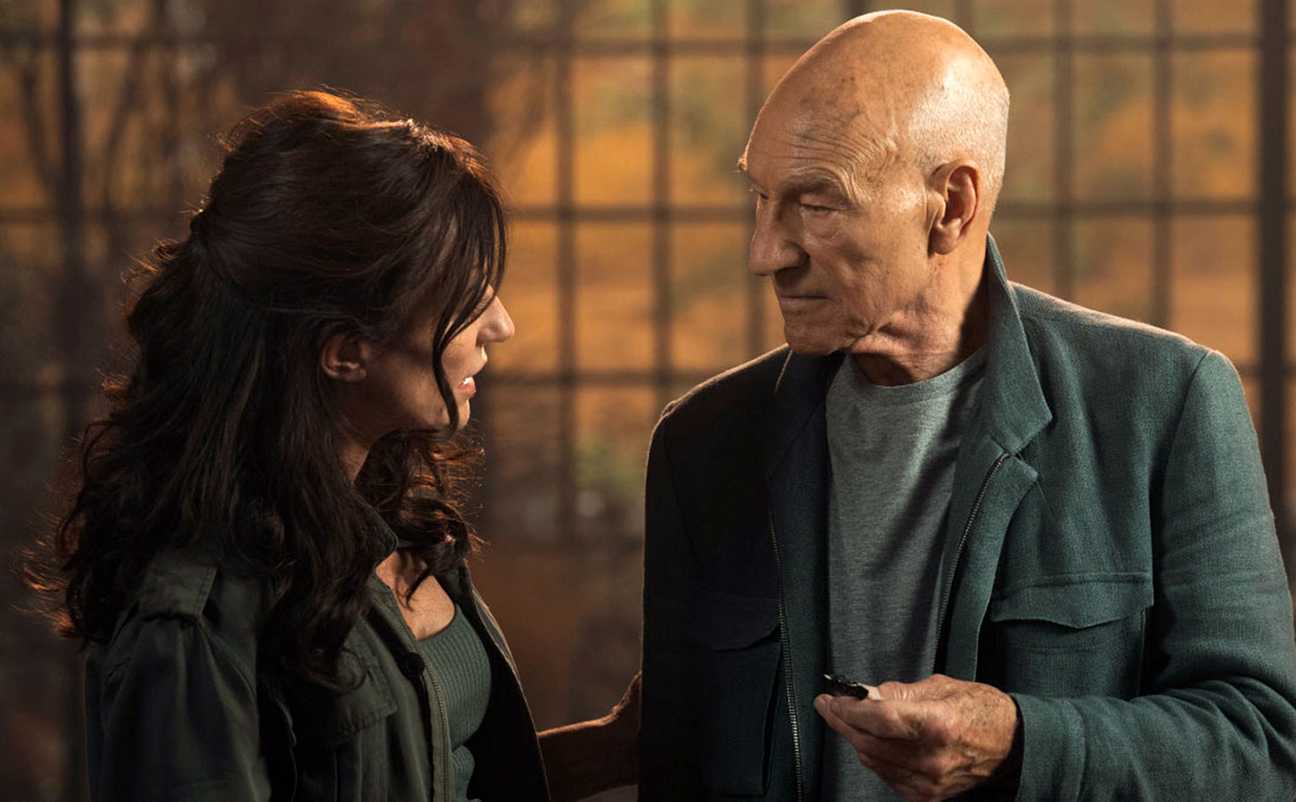 Picard and Tallinn at Chateau Picard in episode 9, season 2 of Star Trek: Picard.

Sir Patrick Stewart really reminded me of how good he can be with this storyline as it played out. I thought he was on-point, demonstrating the pain and guilt that has plagued him and closed off that intimate side of himself. Powerful, moving and so well done in the midst of the overall mission. Loved it. Sir Patrick, you still got the goods, sir.

So, how do Picard and his merry band of 2024 misfits plan to not only restore the timeline, but also get off the planet and back to their own time and place? I’ve read some interesting theories on this and one kind of stood out to me as a really cool little call-back. The sound track for season 2 of Star Trek: Picard has been released and one of the later tracks on it is called “The Travelers.” If you recall, TNG ended with Wesley Crusher leaving Star Fleet to fulfill his destiny with a being called “The Traveler.” The being was very Q-like and, in fact, the Q Continuum is aware of the Traveler.

Dr. Agnes Jurati and the Borg Queen as one.

Could we get a Traveler visit that allows Picard and crew to return to their proper times? Is there a very secret Wesley Crusher appearance about to unveil itself. There has been a lot of effort in downplaying a Wil Wheaton appearance, but perhaps that’s been a ploy all along. Anyway, the sound track having a cut called “The Travelers” got me to thinking that maybe there is something in the wind. Likely not, but why not imagine the possibilities.

Seven was saved by the Borg Queen, but now has her Borg implants reinstalled, something that turned out to have been a positive, it would seem. Raffi got a little Elnor moment or two, which you could see impacted her tremendously, while Rios has to stare into the face of a woman that clearly cares for him and ponder the question of where he truly belongs. Lots of stuff still to sort through in the last episode, but the ride to this point has been delightful. Season 2 has delivered and for that I’m grateful.