Most science fiction paints a bleak future for humanity. Animation titles, and anime, are no exceptions to this. Whether it’s our way of calling ourselves on the carpet for what we know we are doing wrong. Or we simply don’t realize what we are doing, there is something to learn from these stories. Gargantia on the Verdurous Planet features many themes from our environment to sources of information and free thinking. It also covers topics of learning to understand other cultures and not judging others before you understand them.

Gargantia on the Verdurous Planet 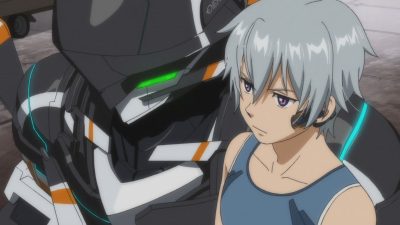 In the distant future, a planet covered almost entirely by oceans, known as Earth, glows in space. Ledo, a boy who has known nothing but fighting all his life, saw the sea there for the first time. On its vast, faintly green waters, men organize huge naval fleets and live modest but active lives. Due to language and cultural barriers, Ledo lives as a lonely foreigner… but he’s not alone. Ledo is just beginning his days on this green planet, asking what he must do to survive here, and what he is living for.

Gargantia has a few key themes we could focus on from the environment, and war to the most topical one of our modern times which is propaganda. Ledo has only known fighting and military life. He was ‘grown’ in space in a time when they have only known living in space and being raised for the military and going to war. So when Ledo ends up getting lost and landing on a planet, known as Earth, he quickly learns everything he was told was a lie.

Stuck on Earth with no discernible way to get home he starts to participate in the community he has found on this water world. Ledo runs into the human’s most feared enemy, the Hideauze while on this water world and quickly uses Chamber (his Mecha) to snuff out the threat. He is greeted with disdain and anger from the natives of this world, and he simply doesn’t understand. They are the enemy, that is what he was taught and told all his life. It has to be true.

But much like real life, when your source of truth is a powerful entity and you have no other side to judge from, you end up fooled by the propaganda of that side. As Ledo explores the truth of the Hideauze and this planet he begins to open his eyes to the possibility that everything he knew was not the truth.