Animation can be a great medium to bring across complex stories that otherwise don’t work with live action. Anime specifically tends to dive into some of the most complex aspects of our lives, even in the most remote science fiction series that come out of it. There has not been a time in my lifetime where the need to watch a show that would normally be escapism, now becomes a symbol of resistance and hope. Code Geass stands in its own right during any other time as a great example of storytelling. Now it is more relevant than ever before in its symbolism. 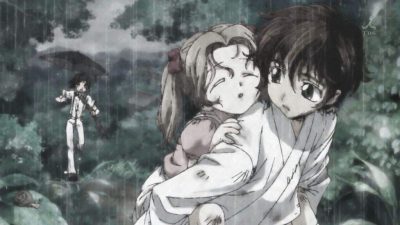 The Holy Empire of Britannia conquered the country known as Japan and now calls it Area 11. Its residents lost their rights to self-govern and are now called Elevens. The Empire uses powerfully destructive robotic weapons called Knightmares to ensure control, but someone is about to stand up against it. Lelouch, the black prince, has endless ambition and uses the power of the Geass to build a world based on his ideals. Suzaku Kururugi, the white knight, aspires to justice and strives to live an honest and fair life.

The story is a mix of Mecha-focused anime and supernatural with powers that are in many ways godlike. Lelouch’s good conscience and level setting come from his long-time childhood friend Suzaku. Code Geass is a series that has so many subplots and stories to tell. However, it is also a series that flips the typical shonen hero stereotype on its head. Our ‘hero’ Lelouch is much like Batman in the Dark Knight. He is the hero they deserve but not the one they need at that moment.

In order to defeat the ruthless rule of the Holy Empire, Lelouch must take drastic measures. But he has a long game that even his closest friends couldn’t see coming. The success of this uprising and eventual overthrow of a more democratic nation took participation from the entire population of Japan. Each citizen had a part to play in helping bring peace, even as our hero paid the ultimate price to help secure that victory.

The story provides a sense of hope in uncertain times. It shows us that even in dark times, the simplest of events and circle of friends can make all the difference in the world. That your family and your station in life don’t dictate where you go. It doesn’t predetermine your lot in life. In the end, the road to peace is never an easy one or without pain or sacrifice.

The series currently has 2 seasons of the anime, a spin-off called Akito The Exiled, and a movie following the events of the first 2 seasons. More content is expected in the series based on the 10-year anniversary celebration announcements for the Code Geass franchise. The newest season is titled Code Geass: Z of the Recapture. No further details are known about it at this point.

You can catch both seasons of the anime over at Crunchyroll.com.