Since all Outlander news travels at the speed of gossip, I’m going to assume that every Outlander fan already knows that Starz announced that they’ll be producing an spinoff prequel, focusing on Jamie’s parents. We’ve been hearing rumors for months that there was a prequel series in the works, and I feel like betting ran pretty even between this prequel idea (which is currently being written by Diana as an upcoming book), and a Lord John spinoff. I’m not discounting the lemon possibility that this second idea will still happen at some point, but we can only discuss what we know! (note: This post contains quotes from the Outlander books, which could be considered spoilery for the new show, and if you haven’t read them, you may want to stop here and jump right to the contest at the bottom.)

We have very little additional info – it will be called Blood of My Blood (familiar phrase to fans); Matt Roberts will write; Ron and Maril will produce. No date has been set, no actors announced. There’s even some confusion about whether or not Diana discussed the position Starz says she has, consulting producer (some articles have said Executive).  So given the TINY amount of concrete info available, let’s dive into the deep well of speculation!

The #Outlander universe is expanding! Outlander: Blood of My Blood, a prequel that will follow the love story of Jamie Fraser’s parents, is officially in development at STARZ.

And be sure to look all the way at the bottom of  this post, where we’ll have a little contest to celebrate this fun news!

The Story We Know

First, we DO have some general knowledge of at least part of the story. From Diana’s books, we know that these two people, Ellen MacKenzie and Brian Fraser, met, ran off, got pregnant, and hid out for a while until the pregnancy could not be denied, and Ellen’s brothers, Colum and Dougal, had to acknowledge their relationship. We know Jamie was the third child (and that Murtagh was NOT his father, as some fans have wildly wondered). We know Brian Fraser is the acknowledged bastard son of the randy and covetous Lord Lovat, The Old Fox, and that Jamie had seen but not spoken to his grandfather until Bonnie Prince Charlie sent him to secure Lovat’s loyalty. We know Ellen died in childbirth.

The whole story of the whirlwind courtship, spurned lovers, and the fight to retrieve her after it had been assumed she was kidnapped was all told in Outlander. Leoch’s horsemaster, Old Alex McMahon, recounts the story to Claire as she massages his rheumatism-crooked back (chapter 24, if you want to read the passage). Alex tells Claire,

Oh, she had a tongue on her, did Ellen, and a mind of her own to go wi’ it. But enough sweetness with it that no one minded much, other than her brothers. And she wasna one to pay much heed to Colum or Dougal.

Their father, Alex adds, doted on Ellen, eldest of six MacKenzie children (two sisters, Janet and Flora, are mentioned only in the family tree) and, Alex says, he “wouldna force her (to marry) against her will.” But Jacob’s death cleared the way to use Ellen as a clan-strengthening bargaining chip, as has been done with girls from the beginning of time. And at the spinstery age of 22, Ellen was promised to chieftain Malcolm Grant. But oh!! the best laid plans…

Ellen and Malcolm head out to the garden to supposedly discuss their upcoming nuptials; the next anyone knows, the Grant clan dashes out the door, Ellen is nowhere to be found, and Dougal rashly decides that Grant has kidnapped Ellen to take her against her will and force her to marry him. Colum is of a more practical bent – that would certainly solve his problem, she would be married off to the powerful chieftain of a rival clan, which would promote some unity, AND he wouldn’t have to pay out a dowry. But by the time Dougal realizes that Ellen has not been dishonored, or even taken, there’s been a battle and both the MacKenzie and Grant tacksmen are “puffing like blown horses, and the steam rising off their bodies in the chill. Grant’s nose was swelled to twice its size, and Dougal could scarce see out o’ either eye, and both wi’ their blood dripping down and dried over their breasts.” Sounds like that could be a fun scene…..

What do we actually know happened? A kitchen maid told them, and described him:

He was so handsome; tall and sturdy, with hair like a black silkie’s and eyes like a cat. She had watched him down the passage, admiring him, and seen him meet someone at the outer door – a woman dressed in black from head to toe, and shrouded in a hooded cloak. They’d met at the Gathering, taken one look and decided on the spot as there could be none other for either one o’ them. so they laid their plans and they stole awa’, under the noses of Colum MacKenzie and three hundred guests. 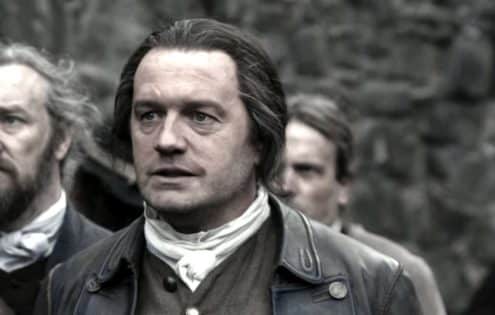 And so, Dougal finally found them, months later, “living in a crofter’s cottage on the edge of the Fraser lands. They’d decided the only way to manage was to  hide until Ellen was wi’ child, and big enough that there’d be no question whose it was. Colum would have to give his blessing to the marriage, like it or no – and he didn’t.”

Along the way, throughout the books, we learned that Murtagh had a life-long love for Ellen, and killed a boar to show her how manly he was – then had the tusks made into beautiful bracelets (and Jamie and Jenny didn’t know who they came from, only that they had been a gift to their mother). And another spurned suitor shows up in Outlander – Marcus MacRannoch, the man who helped Jamie and Claire escape from Wentworth. He also had given Ellen a gift – the Scotch pearl necklace that Jamie gives to Claire on their wedding night. When Claire pulls them out of her pack to offer them as payment for his help, MacRannoch recognizes them.

I gave these to Ellen MacKenzie. For a wedding gift. I would ha’ given them to her as my wife, but as she’d chosen elsewhere – well, I’d thought of them so often around her bonny throat, I told her I couldna see them elsewhere. (Outlander, chapter 36)

I’m sorry,  my crystal ball is a little fuzzy today, but I think it’s a pretty sure bet that we’ll see younger versions of some familiar names – Dougal, Colum and their sister Jocasta; Murtagh, for sure; possibly The Old Fox, Lord Lovat. As the new story is nearly 30 years before the Scotland part of Outlander begins, it’s unlikely that our current actors, including Gary Lewis, Graham MacTavish, or Duncan Lacroix, will be able to play their much-younger selves (it’s not beyond the realm of possibility that they would show up in some capacity). Sam tweeted, “Excited to see the origins (I’m available, kinda, ahem),” but as it would take the new show awhile to get to the point of Jamie’s birth, it’s highly unlikely he’ll appear.

One person that has a chance of appearing – Sophie Skelton, as it’s said throughout the books that Brianna looks so much like Ellen. In fact, in a later book, when Brianna shows up at Lallybroch, she gives Brian Fraser quite a scare as he thinks he’s looking at his long-dead wife.

Wide, startled hazel eyes met hers, and for a second that was all she saw. His beautiful deep-set eyes, and the expression of stunned horror in them.
‘Brian,’ she said. ‘I –‘
‘A Dhia!’ he went whiter than the harled plaster of the house below. ‘Ellen!’
Astonishment deprived her of speech for an instant – long enough to hear light footsteps scrambling down the hill behind her.
‘Mam!’ Jem called, breathless.
Brian’s glance turned up, behind her, and his mouth fell open at sight of Jem. Then a look of radiant joy suffused his face.
‘Willie!’ he said. ‘A bhalaich! Mo bhalaich!’ He looked back at Brianna and stretched out a trembling hand to her. ‘Mo graidh…mo chridhe...’
‘Brian,” she said softly, her heart in her voice… And with her speaking of his name for the second time, he stopped dead, swaying for a moment, and then the eyes rolled up in his head and he fell. (Written in My Own Heart’s Blood, chapter 107)

So, Who Will Play Familiar Characters?

This gives us new room for speculation! While I realize that not all Facebook Outlander groups allow cast speculation, I personally have no such hesitation. Dougal and Murtagh, particularly, are described very differently in the books than the actors that were cast for them. And I’m not in any way complaining – Graham and Duncan are very obviously perfect for those roles. But we’ve already had instances in the series where we’ve seen more than one actor cast in roles because of aging – I’m thinking of Fergus and William, who will be on his third actor incarnation – so it is possible. We’ll also have Jocasta and Colum to recast, among possible others! Comment below with who you think would be great in these roles! 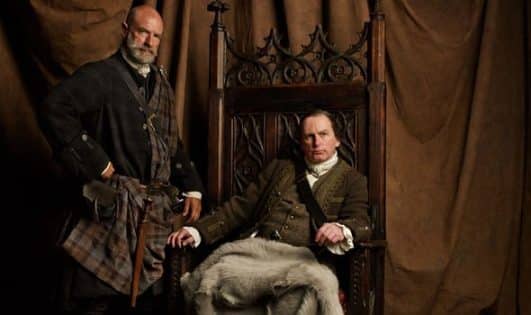 Beyond What We Know

There has to be more to Brian and Ellen’s story than the few paragraphs that have already been written. Obviously there is, because Diana Gabaldon is working on an entire novel with their prequel story. I’m sincerely hoping that’s completed and published before the TV show begins, because the show needs to follow the story, instead of either having Diana put in the position of having to follow the TV show’s story, OR, horrors to think of, we have two completely different stories! What else might we get – how Colum came to take over the clan after the death of his father Jacob? And possibly Ned Gowan’s role in it, as he had hinted? Brian’s life as a bastard at Beauly, and his father’s rapey ways? The building of Lallybroch? Of course, EVERYTHING we come up with is speculation – as fun as it is! Again, comment below with what additions to the story you’re imagining!

Let’s Celebrate – With a Contest!

I’m really excited about this, as you may be able to tell! And I’ve acquired a ton of Outlander-related stuff, so I’ll put together a nice gift basket for one winner of this new contest (sorry, US addresses only)! It will include some cute items, including a framed Season 1 Outlander Trading Card of Jamie and Claire about to say their own “blood of my blood” vows; a heart-shaped Brighton charm; and a professionally quality-graded Dougal trading card, among other items.

One of the contest entries asks for “the secret word” – in this post there is one word that obviously doesn’t belong there. Find that word, and put it in the box! And comment below for TWO entries!

Three if by Space is not responsible for technical issues related to difficulties entering or commenting. If you have an issue, please try either a different platform (Chrome, Edge, Firefox) or a different device. We have noticed that Apple products have significantly more issues than Windows products. Anyone is welcome to comment and enter, but because I pay shipping myself, the winner MUST have a US address available to ship the prize to.

Join us on Facebook at Outlandishly Three If By Space for lots more fun!