Mirror Mirror — Reflecting Upon a Retelling of Snow White’s Tale 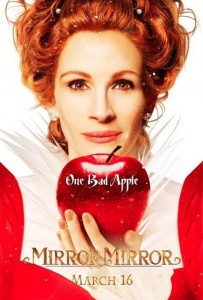 A few months ago, I heard that there were not one but two live action Snow White movies on the way: Mirror Mirror and Snow White and the Huntsman. There’s really little comparison between them, as that ‘Mirror Mirror’ is more of a comedic family tale, and Huntsman is a dark and serious one. For sake of comparison, here are the trailers for both!

Snow White and the Huntsman – Trailer

Now, as you can see above, they’re truly as different as night and day. But this isn’t a movie comparison article, it’s a movie review, so let’s get to it!

I’ve seen many retellings of fairy tales over the years, and I’ve noticed that for the past few years, the entertainment industry has decided to shower us with the darker side of things. From the movie screen, to the small screen, to the video game screen, they’ve been everywhere. We’ve had Catherine Hardwicke’s Red Riding Hood, SyFy’s Red: Werewolf Hunter, NBC’s Grimm, ABC’s Once Upon a Time, American McGee’s Alice series, and the list goes on. They’re all interesting takes on classic tales, but Tarsem Singh’s Mirror Mirror aims to delight by bringing back the lighter side of things.

First of all, let me say that this is one of the most visually interesting films I’ve seen in ages. The vibrant colours, the out-of-this-world costumes [designed by the late Eiko Ishioka, who collaborated with Tarsem Singh for all of his previous films], the locales… I may very well have missed a few things due to eye candy distractions, but I would happily watch this film again to find out.

Lily Collins plays as Snow White, with skin that is indeed as white as snow. [She also has hair and eyebrows as dark as ash, which might give some viewers the briefest of flashbacks to Anne Hathaway as the White Queen in Tim Burton’s Alice in Wonderland] Her father, the King, went out to fight a great evil and is believed to have been eaten by a fierce beast which inhabits the forests near the kingdom. Ruling in his stead is Snow’s stepmother, Queen Clementianna, played with a deliciously tongue-in-cheek wickedness by Julia Roberts. The Queen knows that Snow White may threaten both her rule of the land and her place as ‘the fairest of them all’, so she sequesters Snow in the highest tower of the palace for the majority of the first eighteen years of her life. Snow is well loved by the palace staff, and they all hope to eventually see her take the throne from Clementianna so the kingdom can thrive once again.

The real adventure begins when Snow leaves the palace against the Queen’s orders to see what has become of the people of the kingdom, and in the process meets Prince Andrew Alcott [played by Armie Hammer, who I suspect may have one of the most badass real names in Hollywood], who himself had just been robbed and strung up by the seven ‘giant dwarf bandits’ who live in the forest. I won’t say more about ‘giant dwarves’, because the dialogue of Alcott explaining it to the Queen is hilarious. The scene of Alcott and his assistant Renbock [who was, in my opinion, a sadly underused character] fighting the dwarves is the first of many amazing displays of fight choreography and gives you a totally different first impression of the dwarves. Rather than the dwarves being ‘lovable, magical dwarves who mine for gems’ as Disney would have you believe, they are instead ‘lovable, scruffy-looking bandit dwarves who use crazy acrobatics to rob people for personal profit’.

The pace of the movie stays constant, as does the humor. I commend the cast selection, because the interactions between all of the characters felt believable, as well as the comic timing between them. Every one of the main characters gets their moment to shine, but often times, Roberts’ Queen is the catalyst to the most amusing–and sometimes surprising–moments of the movie. You can tell that she had a grand time playing Clementianna as a ‘not actually evil, just insecure and sneaky’ villain. Aside from her, it seems like many of the characters have redeemed themselves in some manner by the the end. If the movie had a message to tell, it would be ‘Act for the good of all people, not simply for the good of the one’.

Interestingly, it doesn’t feel like it is a mere retelling. It’s not ‘Snow White and the Seven Dwarves’. As screen time goes, the dwarves may very well be some of the least seen main characters [insert your own short person joke here]. Somehow, though, this doesn’t detract from the movie, as well as showing that the dwarves aren’t being shoehorned into scenes and are used to best effect. They weren’t wrong to put Queen Clementianna on the poster: She is, by and large, the showstealer of this film. Snow White is an adorable and capable young lady, but the Queen comes off as a much more interesting character in comparison.

If I were to pick my favorite moment of Mirror Mirror, it would be the surprising musical number at the end. As not to spoil it further, I’ll let you see it for yourself! It left me with an uplifted feeling as the credits began to roll. If this scene doesn’t make you smile, get thee to a doctor to make sure you still have a heart!

If you’re looking for a light-hearted and fun fairy tale movie, I couldn’t recommend Mirror Mirror more highly. But if you’re looking for more action with clashing swords and axes, perhaps you’d best wait for Snow White and the Huntsman, coming in June.

A touch of trivia to reflect upon before I go: Lily Collins had initially auditioned to play Snow White in Huntsman, but lost the role to Kristen Stewart. She was cast as Snow in Mirror Mirror a mere twenty-four hours after doing a script reading for the role. We’ll see how Kristen does with her ‘Dark Snow’ when the Huntsman comes calling in June.