Falling Skies Recap: Love and other acts of courage 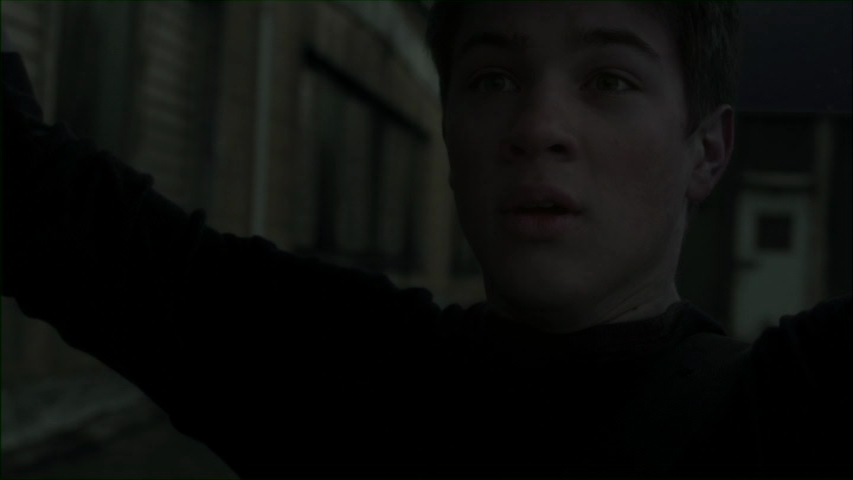 The episode opens up with a scene that is a bit unnerving and than moves to freaky when we see skitters on the roof of buildings with their hands up in the air calling out. We move to a shot showing Ben running to the roof and dropping to his knees, spikes glowing and hands in the air just like the skitters. The look on his face is an obvious mix of horror and fear as he is unsure what is going on, or is he?

Maggie is sitting on the water front looking out over the city as Hal tries to sneak up on her. She can hear him, noting he drags his heals when he walks. Hal remembers that was exactly what his mother use to tell him. Maggie and Hal have their first real moment of bonding, both smiling and laughing with each other, but that was short lived. A loud explosion followed by mech fire is heard coming from the city.

Everyone in camp is running around unsure of what his happening. Even young Matt runs outside, gun in hand ready to fire on any skitters that come near him. I guess I can’t blame the poor kid after nearly getting harnessed. Which leads to another thought. Given what Tom and the others saw in the harness factory, you would think they might have a bit more sympathy and understanding for Bens state of mind after what he went through and the hell he lived with for the many months he was away. Tom gives Matt a job, to watch over the bus and guard Dr. Glass. Tom tries finding Ben but nobody has seen him. 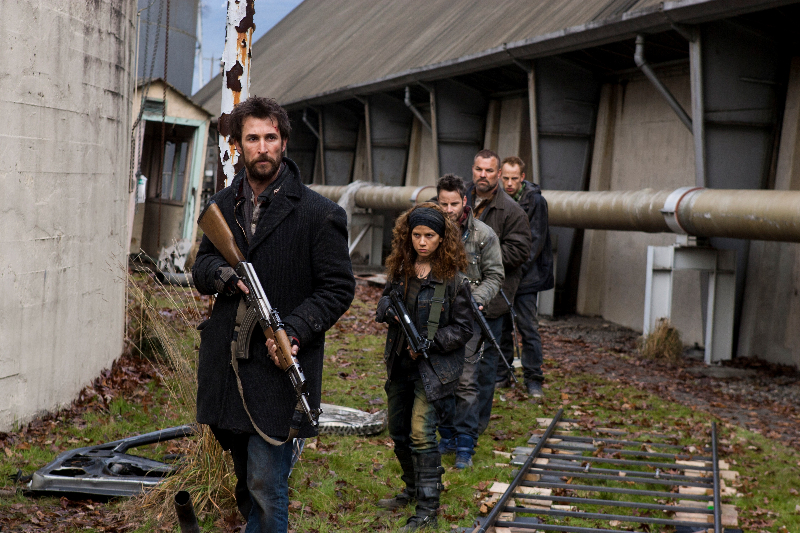 Tom and the Berserkers go out to the city where the battle took place and come upon something they had never seen, and frankly didn’t understand. Nothing but dead skitters and mechs, all killed. Weavers team comes up from the other side and Tom notes no shell casings and no human bodies. The mechs were all shot by other mech fire. The aliens were shooting at each other? Now that is new. What does that mean?

Hal nearly has a heart attack, when under one of the skitters he sees a boy with his spikes glowing, and he assumes its Ben. Once they get the skitter off, they learn in fact it isn’t Ben, its Rick. The last time the 2nd mass saw Rick was at the Battle of Fitchburg and Rick ran off. Just before that he had given up all of the 2nd mass to the skitters in hopes they would take him back but they rejected him. The question is can we trust him now? 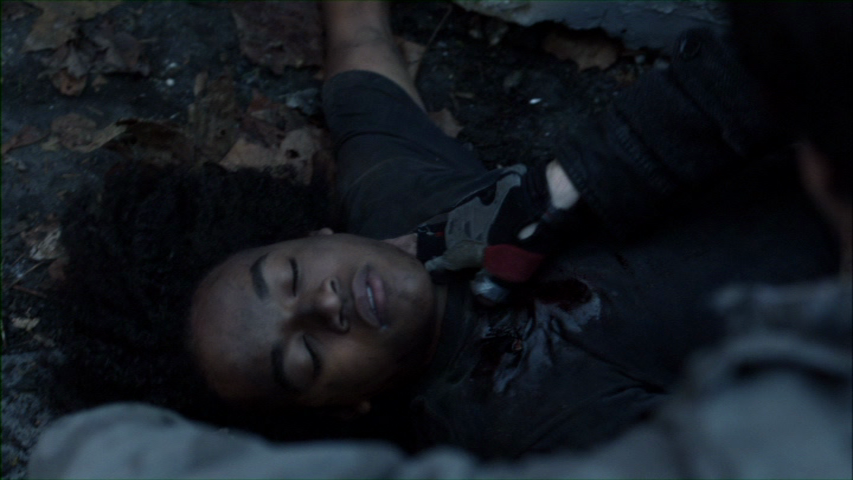 Rick was injured in the attack and Weaver doesn’t trust him. He wants to ask him some questions as soon as he wakes. This is the first time we see Anne push back at Weaver hard, scolding him for looking at Rick like the enemy. She tells him that he was kidnapped against his will and harnessed. They made him do it, he didn’t do anything. The tension in the room with Lourdes fidgeting in the background was well done by all parties. Will anyone step up to defend Ben the same way Anne is defending Rick? Weaver winces as he walks off the bus, the bite from the harness seems to be getting worse, no matter how many drugs she has given him.

Hal returns from patrol, unable to find Ben. Maggie pipes up and tells Hal he needs to tell Tom what he told her. It didn’t take long for Hal give Ben up did it? Hal explains Bens spikes glowing like Ricks back at the harnessing chamber. Tom now knows Ben has been able to communicate with the skitters. Tom isn’t pleased. Rick is awake and he is freaked out.

He makes a claim to Tom, that they are all in danger. He asks if Ben is here and when he is told no, he says Ben is in danger, we all are. Ben is hurt really bad. They agree to allow Rick to lead them to Ben. They arrive back at the battle scene and Rick takes them behind some buildings to where Ben is hiding. Rick says Ben is here too, but with who else? Blood can be seen on the ground. 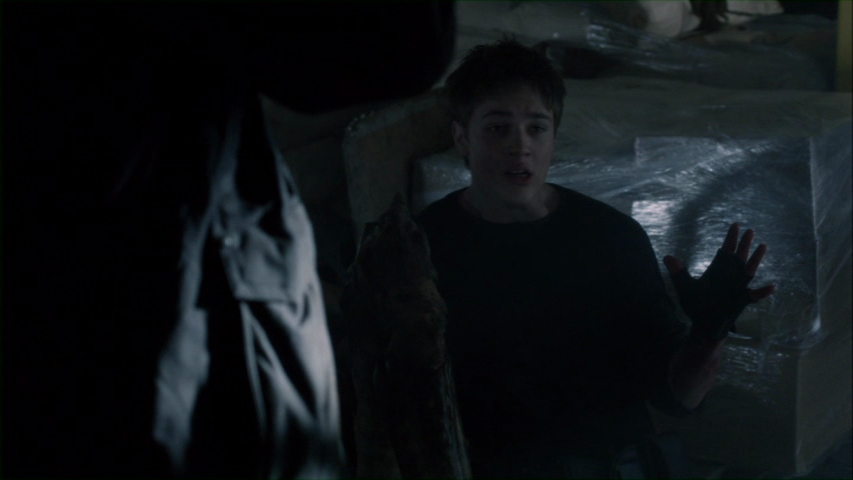 Ben asks them to go away but Rick reminds Ben if they don’t help ‘him’ he will die and everything he fought for will be lost. Ben comes out of hiding with his gun pointed at Tom and the others and says he won’t let them hurt him. When asked who, red-eye comes out from the corner and Tom freaks out. He remembers this skitter, and he doesn’t believe Rick and Ben are protecting it. The skitter talks through Rick and explains he saved Tom from death. He wants to talk with them. He says we are fighting the same enemy. He wants to defeat the overlords.

Weaver and the others want it killed right now, but Ben gets in front of it on his knees and begs them to wait and not to kill red-eye. Tom and Weaver discuss the possible advantages they might have if they can learn something from him and agree to take him back to camp. The look on Bens face is that of a wounded and afraid animal. He is very much willing to die for this skitter and nobody is sure why. Crazier still is the fact that this skitter makes the claim he wants to defeat the overlords? 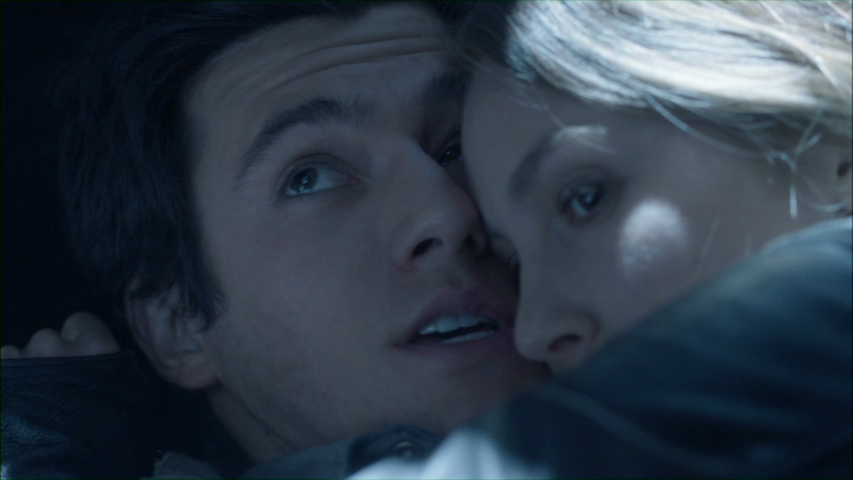 Out scouting for meds Hal, Maggie, Tector and Crazy Lee don’t find much. Mechs approach and Hal and Maggie duck inside a car for cover as the mechs stomp by. Maggie and Hal have a very close chat and moment together. Back at camp, Ben begs Anne to help the skitter and Anne refuses to waste supplies on it. Ben gets frustrated asking why nobody will believe him. Tom takes Ben aside for a talk.

Ben tries explaining to Tom that Red-Eye is the leader of a group of skitters who have been able to resist the harness and are uprising against the overlords. Tom is having a hard time trusting Ben and questions how long he has been in communication with it. Ben tells him since Jimmy died. Tom asks about the spikes and Ben is caught off guard asking who told him that. Ben knows but never thought his brother would betray him like that. Ben didn’t want Tom to think of him as the enemy. Tom says, “the enemy Ben? never the enemy”, “damaged, broken then” says Ben. Tom said if you had told me I would have tried to help you. Ben yells “Than help me now”.  Tom asks how, and Ben simply says to “believe me”. 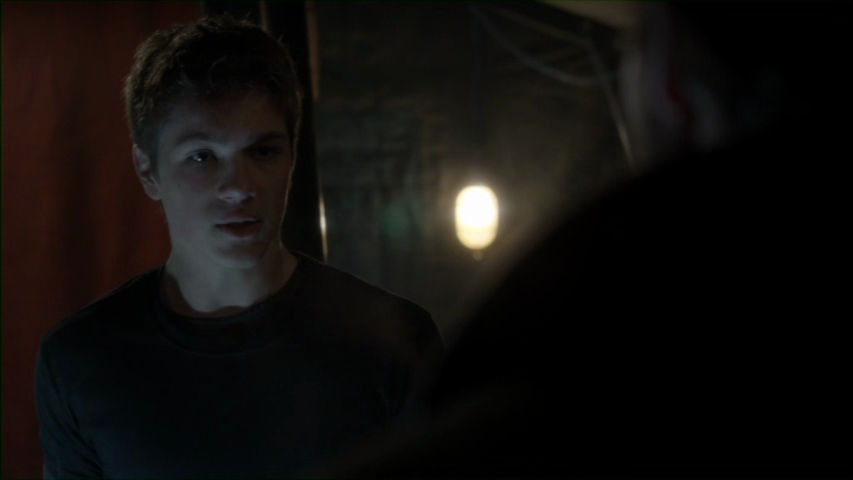 The skitter thinks the human race, that Ben and Tom are the only way they have a chance of fighting back against the overlords they have tried to overthrow for nearly 100 years. We go back to Hal and Maggie, in close quarter having another intimate moment. Maggie brings up Karen, and their moment turns a bit unnerving.

Back at camp, Weaver and Tom come to talk to the skitter and get some answers. The skitter wants to talk to Tom alone. The skitter talks about why Ben is so important to him. But the alien mentions a death squad is on its way to kill him and everyone in the camp, so they don’t have much time to talk. Hal and Maggies group it the jackpot when they find a hospital with a full pharmacy. Maggie won’t got inside, having some flashbacks of her time there when she had cancer. She shows Hal the scars on her head, it was brain cancer. Hal and Maggie start to kiss, but Maggie backs off and without reason pushes Hal away. 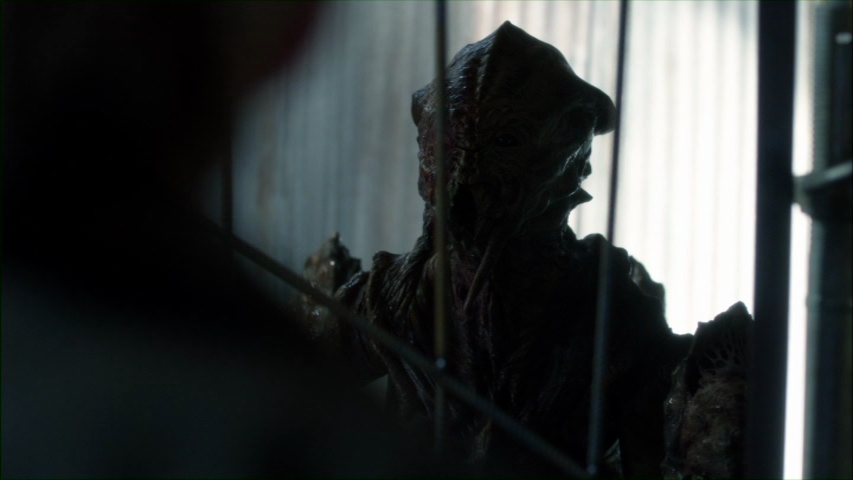 Tom isn’t convinced of Red-Eyes claims. He doesn’t buy the skitters fighting back. Their planet was like ours, the aliens came and enslaved them, the chemlock (harness) was infused into their spines at youth, like the humans. Together they could fight back, something neither could do alone. Tom thinks its a fairytale. Red-eye claims to have regret and remorse for everything that has happen. He says your weapons are substandard and you do not understand their strategy. So you can either fight with us and live or die alone.

Maggie ends anything between Hal and her, without a valid reason. But Hal isn’t giving up like that. As they near camp, they are attacked by an approaching group of mechs. Maggie is down, injured near by. Hal goes back to save her. The skitter knows why they are here, to kill him and everyone in the 2nd mass. Weaver thinks red-eye brought them here. Weaver wants it dead. Red-Eye breaks open the cage and  runs out. Boon shoots at it, but Rick jumps in the way and is shot at point blank with the shotgun. Ben runs to Rick who is almost gone. Rick asks that Ben talk to his father, saying he has a father and he needs him. Rick tells him to make him believe. Rick is gone. Bens lost the last connection, the last person who understood him. Ben tries running off, saying red-eye needs him but Tom stops him, Ben crying. 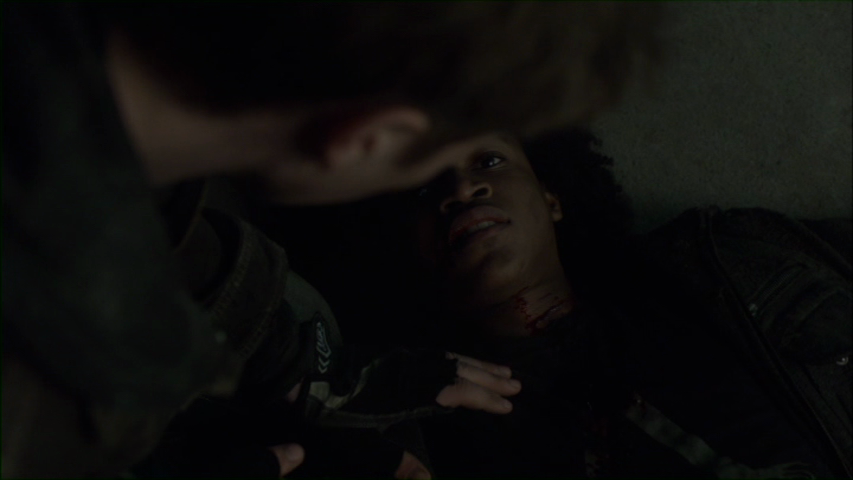 Hal runs into the med bus with an injured Maggie and incoming Mech fire. Hal drives the bus as the 2nd mass prepares to bug out quickly. Maggie is pissed that Hal went after her. Hal expresses the fact that he needs her, and he loves her. Maggie questions what this relationship is. Maggie wants a favor from Hal. She asks for him to sit down and stay with her until she falls asleep. She is afraid of hospitals and you can’t blame her. This is a very touching moment for Hal and Maggie, one that actually flows naturally on screen.

Weaver wants to see Tom now that they got away from the impending attack. Weaver is pissed for disobeying an order when it came to the skitter. Weaver doesn’t think Ben can stay with the 2nd mass. He thinks Ben poses a risk to them and someone is going to have to make the hard call. Weaver doesn’t want to be the one to make that call but says Tom needs to be ready to. Weaver recalls not liking Tom much when Porter put them together. Tom says the feeling was mutual. Weaver has come to respect him and Tom Weaver. 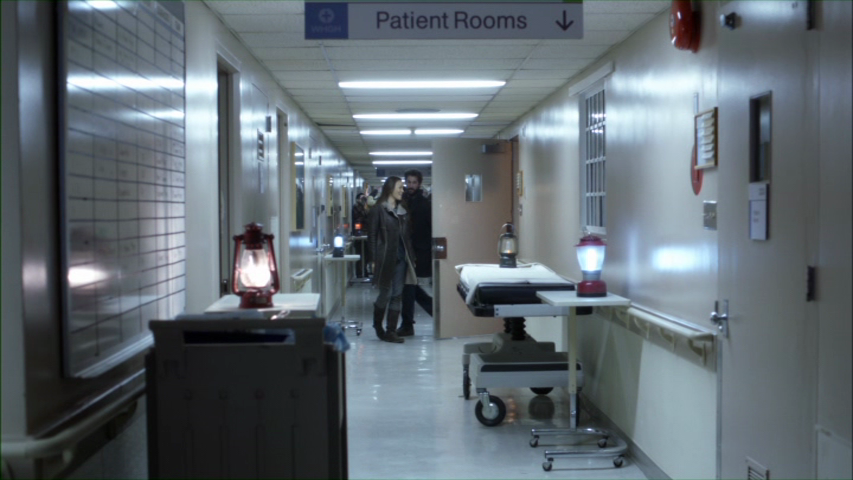 Jamil manages to get the lights on using a small generator. Tom and Anne note there are a lot of empty rooms, and they take advantage of that and jump into a room, alone. The hospital was several hours away from where the 2nd mass was, remember Hal and his team left when it was still light and it was night when they got to the 2nd mass. But how long can they remain there before they are found? 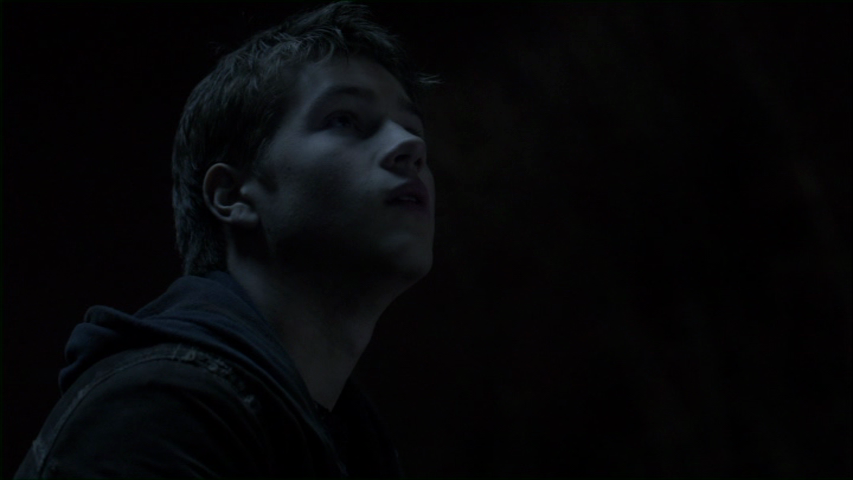 The ending was powerful tonight. Ben is on the roof, looking up at the stars, gazing at its infinite darkness. Matt comes up there and sits next to him on the ledge. Matt says he isn’t afraid of anything anymore. Ben says that is impossible but won’t tell Matt why. Ben has a secret to tell Matt, he may have to leave soon, for awhile. Ben isn’t sure when but Matt doesn’t want him to go.