Revolution 2×02: There Will Be Blood

By: Erin Conrad
Revolution Revolution review There Will Be Blood

After last week’s frantic ride through the now-splintered Revolution world, I feel like this episode has us settling in a little bit. Not much, but at least we have some clarification on some of the missing six months. As long as our merry band is separated, you can be sure that we won’t stay in one location for too long, so I hope none of you are susceptible to motion sickness. Did last week’s hour-ending surprise come as a shock to you?

This week, in an aptly named episode (and my first question was, in this show, when won’t there be blood? my second question, when did they abandon song names for titles?) blood takes on new meaning. Instead of just being a byproduct of violent actions, there seems to something valuable in some people’s blood.

As we saw in the last seconds of last week’s episode, Aaron, gasping, seems to come back to life. His sense of humor is untouched – when Rachel asks him how he’s doing, he says, “for a dead guy, ok. Little dehydrated, hungry for brains.” Aaron learns from Rachel that he was dead? unconscious? for 2½ hours.

In New Vegas, Monroe and Charlie are taken captive by a group who says they know who Monroe is, and that they’re taking him to the “real” US government, and want him alive. Charlie warns them that they’ll never succeed in getting him there. She tells Monroe how she feels about him: “You’re nothing. Just a drunk fighting for coin in a whorehouse.” Monroe doesn’t seem to dispute that characterization, but he hasn’t given up, and carries a dangerous undercurrent even while chained up in the bottom of an empty swimming pool.

Monroe tries talking to Charlie. “You were there the night bombs dropped, at the Tower, right? Randall pushed the button, didn’t he? I walked into defeat, might as well have pushed the button myself.” She says, “Did it ever occur to you that you sucked at your job?” Monroe and Charlie are pulled out of the swimming pool. The guard, not having any quarrel with Charlie, lets her go and bundles Monroe into a horse-drawn cart. Of course, Monroe escapes, kills the older guard, and Charlie keeps him from killing the younger one. Monroe and Charlie fight. He tries to leave Charlie, but she runs after him, and he steals the horsecart.

Titus Andover, Miles’ creepy captor, is also holding Sheriff Mason and a woman in small pens. A man is removed from a pen, screaming, and dragged through a red door – the woman says that people who go through that door never come back. Miles and Mason discuss how he got that position – he says his dad used to tell him stories about the most famous Texas lawman, Walker, Texas Ranger, and Miles, trying to keep from laughing out loud, nods and says, “His legend is known far and wide.” The jailers inject Miles with something and take blood samples, and compare Miles’ sample to Mason’s. The guard says, “Him, not him,” then shoot the sheriff. 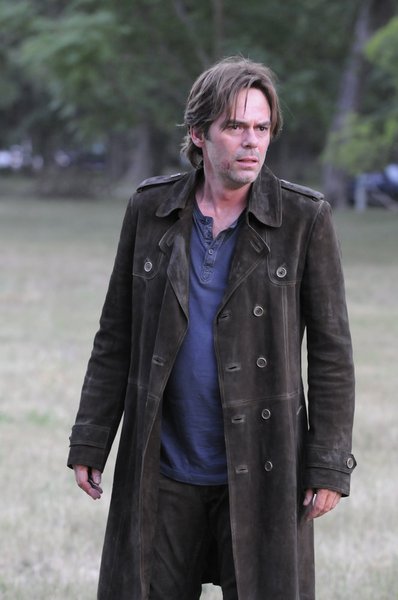 The dead sheriff is sent back to Willoughby on a horse. The townspeople gather for safety until the Rangers can come and help; Rachel wants to leave to rescue Miles, but her father refuses to help. They continue to argue about rescuing Miles. “He brought you home. You don’t think I’m grateful? I just want to keep what he gave me.” Nobody else wants to help, either. Dr. Porter asks if Miles is “worth it,” and the answer is clear on Rachel’s face. Miles tries to escape, but goes against his instincts and tries to free the captive woman. In the time it takes to unlock her, the jailers grab them. “Titus wants a word with you,” they tell him.

In Savannah, Neville and Jason meet with a man that Jason knows, and recruit him to help them try to figure out what the “Patriots” are up to. “Look at everyone hugging up to them like they’re the second coming,” Neville says. “They’re not who you think they are. They’re wearing a mask.” Neville says that he plans to assassinate “that Oliver bitch,” the woman who spoke to the crowd.

Flashbacks Tell More of the Story

Aaron, recovered, is teaching classes while the townsfolk huddle together. But he has what he can’t believe is a hallucination – he sees Ben Matheson on the floor in the building hallway, dying. 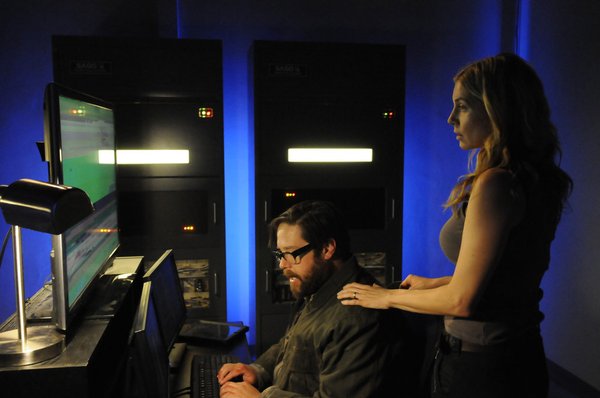 Miles is brought before Titus Andover, but can’t resist wisecracking. “You can hear yourself, right?” he tells Andover. “You’re aware of how creepy you sound?” Andover says that the night of the blackout, he knew he was about to be arrested for what was likely child pornography. He reveals that he had been the headmaster at a boys’ school. But now, there’s freedom, no rules – “How is that not a better world?” Miles, disgusted, says “If you’re going to kill me, kill me. Just  stop talking.” Miles asks what Andover’s group is looking for, but gets no answers. To prevent Miles from attempting to escape again, Andover breaks Miles’ hand with a hammer (I have to add here, I will be reviewing a Spring 2014 series, Outlander, and one of the pivotal scenes also involves breaking fingers with a hammer – makes me queasy every time I think about it).

Back to Neville in Savannah — he is quietly following Oliver down the street. Jason’s friend, having been convinced he’s part of the scheme to bring her down, is also following and carrying a gun. Neville calls out to Oliver and turns and shoots the other man, supposedly foiling an assassination plot to “prove” his loyalty to Oliver. Now, she is in his debt. Neville carries grudges, and show creator/producer said recently that you don’t want to be on Neville’s bad side – or his good, apparently! He talks with Oliver, and tells her that he saw the guy tailing her. He says he had worked security for Monroe, and even met him once or twice. He says he wants to help her. He tells her, “I was born an American, and I would like very much to be one again,” but we know that he doesn’t mean by becoming part of her group.

Aaron tries to tell Cynthia about what he’s gone through. She’s a religious woman, and believes that it could be a miracle. “From God?” Aaron asks sarcastically. “Just because I believe doesn’t make a whackjob,” she says. “I know what brought me back,” he tells her. “Not why, I’m not sure there is a why. I know what caused the blackout, if you’re interested.” Flashback to the Tower- Aaron tries to prevent the ICBMs from detonating, but the system crashes and he has to watch the blasts. As Neville and Jason break through the door, the power in the entire building goes out. Lights and computers short out.

Miles is back in the cage with his broken hand. The guard tells him it won’t hurt much longer – “You’re next, fancy pants.” The guard writes something on a paper, and seals it with wax – with the seal of the Great Pyramid of the United States (look on your dollar bills).

Rachel finally has a group to rescue Miles. As they ride through a field, they see fireflies. Rachel tells them not to touch them, but there’s a bigger problem – they see that they’re riding through hundreds of dead rats.

Miles is taken through the red door. A young girl is lying on a bed, hooked up to tubes, and blood is being pumped out of her. Tonight’s cliffhanger – why did they take the blood samples from Miles? And why are the taking the blood from the girl?

Everything Connected to Nano-Tech

There are no coincidences in Revolution. During a recent half-hour Twitter Q&A , Eric Kripke said that the fireflies are “part of the larger mystery,  which is what’s going on with the nano-tech and what happened at The Tower.” If you remember, in S1 Rachel healed her leg by removing the nano-tech power pack from her son Danny after his death and implanting it in her leg. Could this same technology be what brought Aaron back? “Everything is connected to the nano-tech,” he added.

Neville, so far, has been given the least attention. I’m glad to see that he has found a cause to pull him from the depression he was in after losing his wife to the Atlanta bomb (but, in this show, do we ever know for sure if she’s gone), and it’s possible that he may turn out to be the hero of the day, if the “Patriots” are the bad guys we think they are.