This may be the shortest review I’ve written – Give them all the awards. Every single one. This was not an easy episode to watch, and the second time through was even harder than the first – but it was the best episode yet.

No, that’s not true. I really do have more to say. Many of us had been dreading this episode, I know, having read these chapters in the book. Could it have been skipped? Absolutely not. And Ira Steven Behr’s script, with Anna Foerster’s direction, was superb. There was no lightness, orbeautiful scenery to distract you in this episode (even Angus and Rupert’s dice game, while comedic on the surface, had an air of desperation).

This incident in Jamie’s life crystallizes his relationship with Claire – her bravery and insistence on rescuing him erases any doubt in his mind that she loves him as he loves her (and although I don’t think that the series, to this point, has spent enough time on building this relationship, I think there’s no doubt of their love in our minds as well). And it makes an adult out of Jamie – even though he has fought in wars, and been flogged nearly to death, his life to this point has, in some ways, not been a fully adult life. Estranged from his sister, without the responsibilities of his estate, without a wife or children, he’s had to worry about nobody but himself. Yes, horrible things have happened to him, but he survived, intact physically and mentally.

Now, though, he has more to worry about, and a more immediate threat to his life. 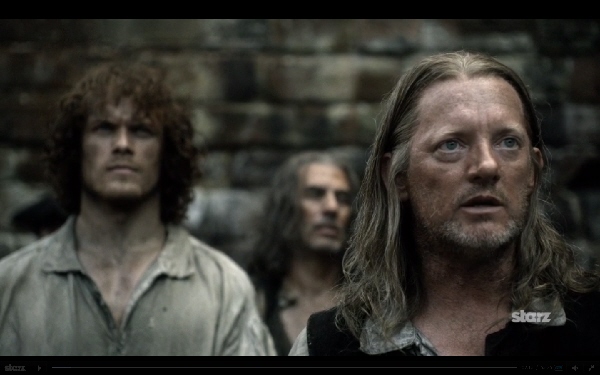 The first 10 minutes of this episode were devastating. I liked McQuarrie, and it was hard to watch his botched execution. The callousness of the Redcoats, pushing the prisoners off the gibbet, was difficult enough, but when McQuarrie’s neck didn’t snap, I’m sure I wasn’t alone in having a bit of nausea, watching him kicking and twisting. I appreciated his bravery as he and Jamie said their final words. “The thing that grieves me is that my wife will never forgive me for foolishly getting myself hung,” says Jamie. “I always knew I was fated to dangle at the end of a rope,” McQuarrie answers. “That’s why I made sure to leave none behind to mourn for me.” And as he steps onto the gallows, he calls out, “My only regret is that I wasted my life as a common thief, rather than a patriot serving my country against you lot. To the Devil with England, and God bless King…” 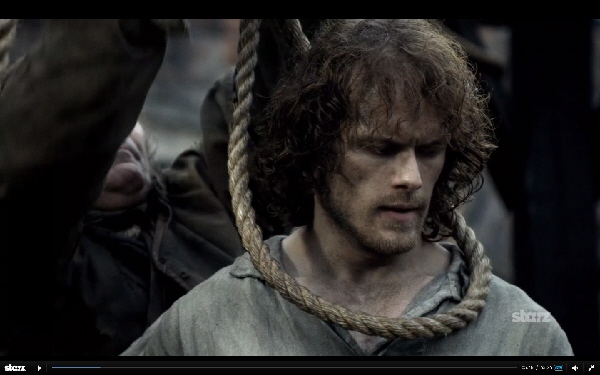 My heart sank as Jamie’s name was called out – and I was glad to see that he didn’t intend to go to his fate quietly. But you could read his emotions from the look on his face as Randall gallops into the kill zone, shouting “Stop the executions!” – “can I just step off of this platform myself and avoid what must be coming?” Sam Heughan has the consummate actor’s ability to have several recognizable thoughts pass over his face in rapid succession – or none at all, indicating tight control rather than lack of talent. Relief, immediately followed by fear, then resignation. And Tobias Menzies – this was his tour de force. His naked hunger for Jamie, only observable to those who would know what to make of that emotion – amazing. 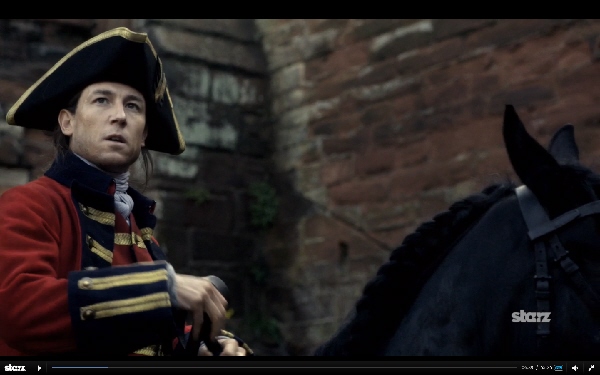 One interesting tidbit that many of you may already know – Sir Gordon Fletcher, who meets with Claire, is played by Frazer Hines, who has a role in the original creation of Outlander. Diana Gabaldon, when asked how she came up with this idea, has said that she was watching an episode of Doctor Who, and the Doctor’s companion was a young, kilted Scottish man from the 1700s named Jamie – played by Frazer Hines. She recalls thinking he was “fetching,” and decided at that point to set her story where that Jamie came from. 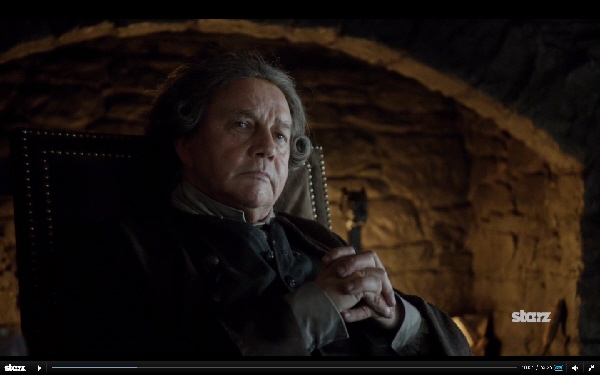 Claire plays a dangerous game, attempting to wheedle information out of Sir Fletcher. But the toll it takes on her is evident, as she vomits and collapses coming out the prison. A more forbidding, frightening place couldn’t be found for this location; you can almost see fear, desperation and violence oozing out of the bricks. And when she returns to the prison, acting on the information gained by Rupert and Angus, you knew that guard would be coming back into the room – it was just a matter of when.

One of my colleagues here at threeifbyspace does reviews for Doctor Who by printing the best quotes from the episode; he always has more quotes than he can actually fit in for each review. I kind of feel that way for this episode – except, unfortunately, Black Jack has most of the best lines. “I prefer the noose to your company,” Jamie tells him. “Why?” Jack seems genuinely surprised. “Do I make you uncomfortable? Do I haunt your dreams since Fort William? When you awake in the middle of the night, shaken and sweating, is my face the one you see in the darkness? Tell me, when you lie upon your wife, and her hands trace the scars on your back, do you ever think of me?”

“I want you to admit to yourself that you escaped Fort William, but you did not escape me. Surrender this pride you hide behind. Admit that even now, you’re terrified.” 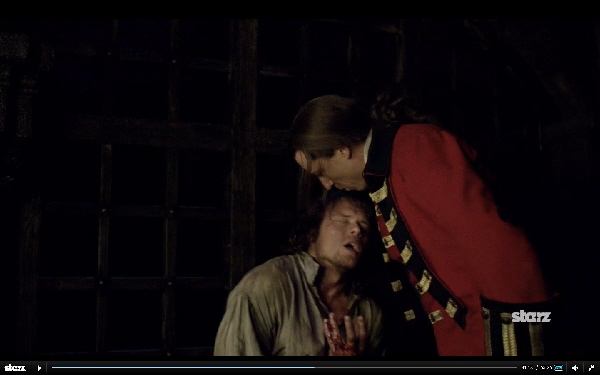 I admit that I was nervous about how this episode would turn out. The last couple of episodes have left me with a very unsteady sense of the show’s direction, veering wildly as they did from Diana’s books. While I can’t say that this episode redeemed the previous ones, or helped me make any sense of why they were done that way, I can say that this gave me a great sense of relief. I’ve said this before – I don’t have trouble with changes as long as they’re true to the spirit of Diana’s books, true to the essential nature that makes it my favorite book series. And this episode, which was not without its own adaptations, was totally true to the book’s essence. (If you haven’t read the book, you may hear some complaining about missing wolves – when Jack tosses Claire out of the prison, in the book, she is confronted by a large wolf, who she kills to escape. This was a terrific, exciting scene, a bit of bravura writing – but first, wolves are very hard to control and make them do what you want; and second, we just didn’t need one more heart attack during this hour. Honestly, readers, did you miss it?)

It was very easy to see that Jamie’s pain in this episode wasn’t mostly in his now-mangled hand – it was from his fear for Claire and his need to see her safe, a theme that has come up before – and will come up again. Without the need to protect her and see her off safe (well, we knew that Jack wouldn’t walk her to the front door and politely escort her out), he thinks he would have been able to fight til his last breath, and stand up to Randall as best as he can. But he has given his word that in return for Claire’s life, he will give his to Randall – a beautiful, honest moment of self-sacrifice and total love. This is an emotion and a moment that Randall can never understand. 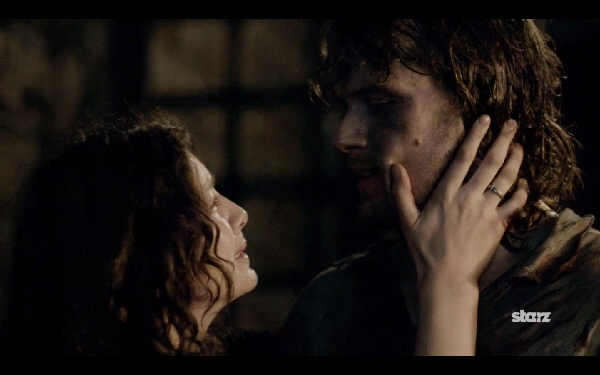 The lighting contributed to the threatening, stomach-churning feeling as well. Claire rushes to Jamie’s side in the flickering half-light from the torch in the cell; you can’t see either of them well, but it’s so much more realistic. If any more modern lighting had been used, the moment would have lost so much. 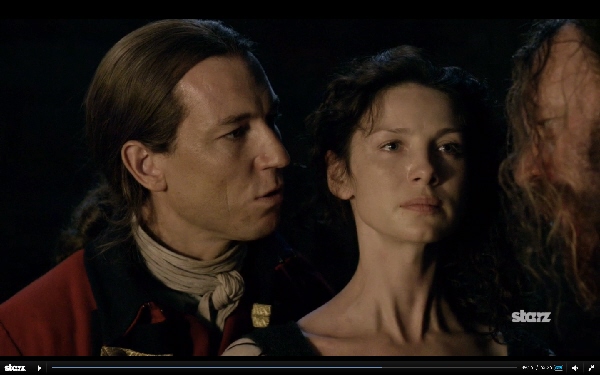 Claire’s courage is amazing, as well. “You’re no coward, I will grant you that. You’re a match for your husband, and I will give you no better compliment,” Jack tells her. As Randall removes her from Jamie’s cell, he says, “I heard the most extraordinary rumor about you. There was a trial at Cranesmuir,” he says. “You were accused of being a witch.” “Yes. Witch I am,” she hisses back. “And I curse you. I curse you with knowledge, Jack Randall. I give you the hour of your death.” And he pushes her through the hole in the floor designed for removing corpses, completely expecting her to end up in that pile, facing Taran McQuarrie’s lifeless body.

And he returns to toy with Jamie, running his hand – and his tongue – over Jamie’s flogged back. “How does it feel to be alive – and wear so much dead flesh? Shall we begin?” My skin crawled, just as Jamie’s must have, with that touch, but Jamie has given his word not to struggle. 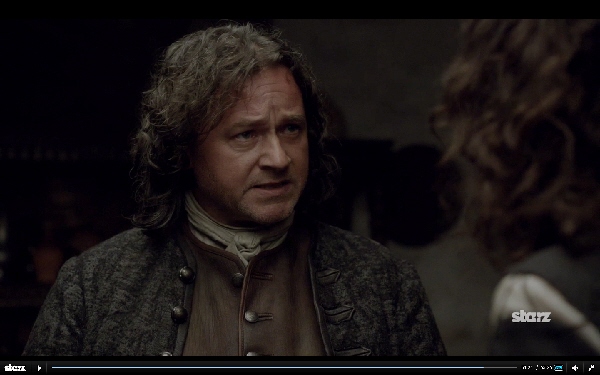 Claire is collected by Angus and taken to “loyal” Sir Marcus MacRannoch (Brian McCardie). He, sensibly, refuses to assist in the rescue attempt, fearing the Redcoats’ retribution to his home and family. But he’s shaken when he realizes who it is that he’s being asked to help. “Where did you get these, woman?” he demands of Claire when she offers to pay him with the pearls Jamie gave her. “Fraser, did you say your name was?” “My husband gave them to me on our wedding night,” she tells him. “Did he? Ellen’s son? Your husband is Ellen Mackenzie’s son? I gave these to Ellen Mackenzie as a wedding gift. I’ve thought of these so often around her bonny neck. I wonder if she ever thought of me while wearing them. So you’ll wear them in good health.” “I’d stand a better chance of doing that if you’ll help me get my husband back,” she retorts. 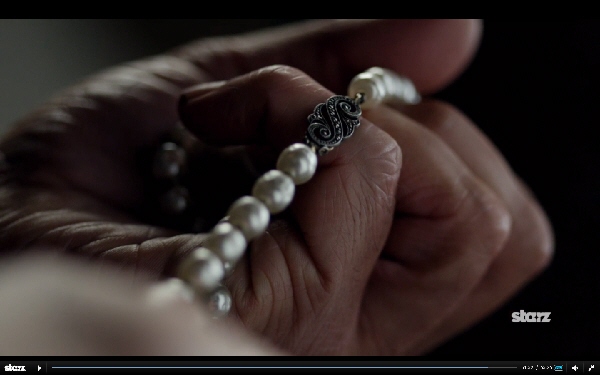 Our story ends in two weeks – there will be no episode next week, because of the Memorial Day holiday weekend. What does Murtagh plan to do with the cattle? It’s no spoiler to say that Jamie will be rescued – after all, the series has been picked up for Season 2, and it just wouldn’t be Outlander without Jamie Fraser – but at what cost? What does he endure at Black Jack’s hands? How black, exactly, is Jack’s soul?

I will give you the same kind of “worry warning” preview for the season finale that I did for this episode – BUT NOTE: Starz will be releasing screener copies to reviewers two days later than usual, on the day before the official air date, so don’t look for my preview until Friday evening, May 29 – I realize this is only hours before some of you will be able to watch the episode (if Starz makes it available on demand and on Starzplay as they have for the past several episodes). We haven’t seen the end of stomach-tightening scenes, so look for my preview to be prepared! 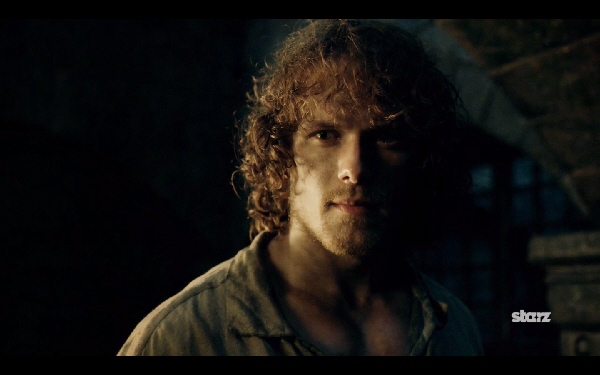