This is a very different season of Dominion. Last year helped to establish our world, and frankly, if they had stayed in Vega for this season, there would have been plenty of mystery and interest to fill out the episodes. But I’m loving how the post-angel-apocalypse world is expanding this year. Last episode, we were introduced to the mystery of Mallory, Alabama; and tonight, we get the mystery of New Delphi. After being captured by some of the city’s denizens, Alex and Noma have a hushed conversation: “The 8 balls – they’re different, civilized. I don’t know how it’s possible,” Alex says. Noma replies, “Some lower angels are more evolved than others, but I’ve never seen them act like this before. They’re so human.” Both Mallory and New Delphi are light years away from what we saw in Vega!

Let’s look at Mallory first. Michael is as mystified as we are. He uses one of the 8-balls haunting the perimeter in an experiment – after speaking to it in Lishephus, the angel language (created for Dominion, of course), he learns that the lower angels can feel the fire, and actually burst into flames when they get too close – still far enough away to make this completely weird. Who is “the Prophet” who set up the rules for Mallory? It has to be someone with a link to the Almighty. Although Laurel refers to the prophet as “he,” could it be Raphael, the fourth Archangel, Uriel’s twin sister? (Learn more about Raphael and the other Archangels in the Dominion website’s new weekly feature, Revelations!)  A clue may be in the information about Raphael – that she appeared to the Babylonian King Belshazzar and warned his troops of their predicted fall. Could she have tried to save one worthy group of humans from the slaughter? 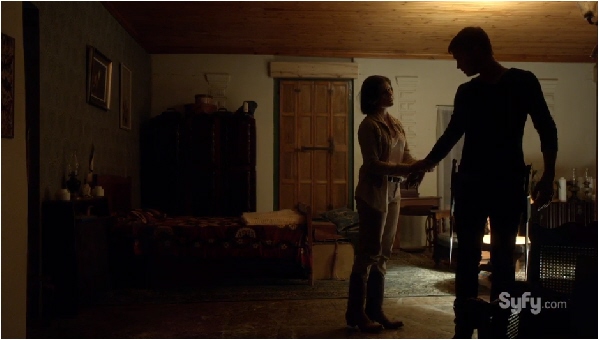 Michael is beginning to have feelings for Laurel, the leader of the town. But he knows that if his identity is revealed too soon, any chance he has of redeeming himself or coming to terms with his lightning anger will be forfeit. And so he shows himself to Harper, the woman who saw him and his wings in the ocean, who has now come back to try to confess her sin and reunite with her fellow Mallory citizens. He tells her that the secret must be between only the two of them – but in Mallory, secrets are sins, and keeping secrets, according to the Prophet, can remove the protection the town has. And so Harper is killed because she refuses to give up her final secret – and another murder is on Michael’s head. 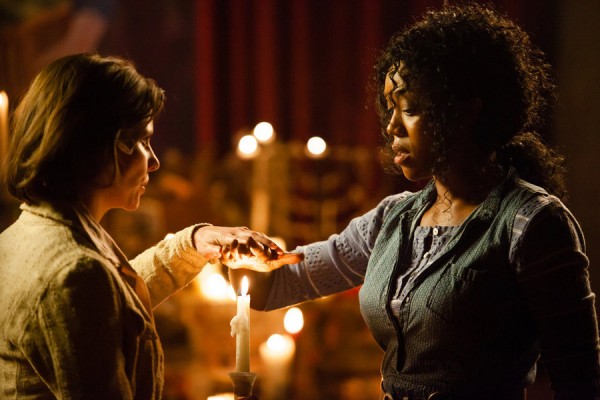 Laurel has some odd insight into Michael. She tells him, “You have to learn to forgive yourself, or it doesn’t matter where you are – here, or anywhere else in the world.” And Michael wants to find forgiveness for his unforgiveable sins – but doesn’t believe that it’s possible anywhere. But if it is, could it be here in Mallory that he finds some acceptance and understanding?

On the first day of the war, our town was passed over. The next morning, the prophet came. He said he’d received a message from God, and that if we did what he said, we’d be spared. He built the fire that protects us. It cannot go out. My heart tells me that after the celebration, you’ll feel the same way that I have all these years. The sense of peace, protection from evil.

Turning to New Delphi – this is a frantic hub of activity and commerce. Julian (Simon Merrells), the city’s leader, is a human, but angels and humans “live together in peace in our underground paradise,” he tells Alex. He’s a sun-starved, dissipated old rock and roller in appearance,but ruthlessly defends his community. Until Alex tells him that Gabriel is on the way, and that he can help Julian get Gabriel. New Delphi is built on a foundation of trade but also on the hatred of higher angels, and Alex tells him the he hates them too. Julian isn’t willing to take Alex’s word on what’s coming – he’s obviously learned, over the past 25 years, not to trust anyone from the outside. But when Gabriel’s forces kill a couple of ND guards and enter the city, something has to be done. Quickly. 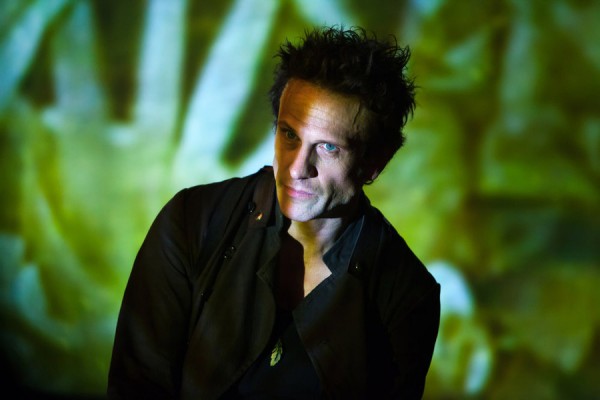 Julian isn’t impressed by Alex’s markings – “I don’t care so much what’s on the man,” he says, “I care more about what’s inside.” And to find out what’s inside, he proposes to throw Alex into the proverbial lion’s den – what is back there, behind that heavy door? And what is the “key, of sorts,” that Julian wants retrieved? In the “Inside Dominion” clip for this week, production designer Dan Novotny suggests that they might be the basement of a NORAD facility – could the door be a missile control room, and the key one of the launch keys? That would put an scary twist on the show. 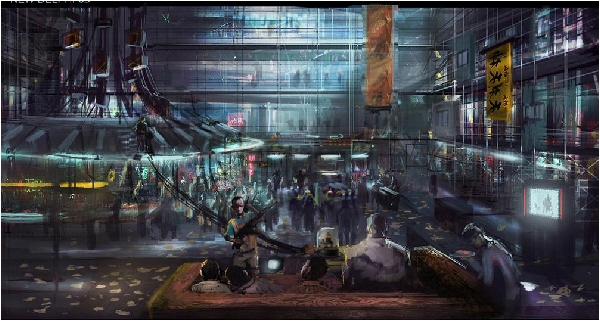 And finally, back to Vega – Claire has been attacked by V1 Zoe, a former member of the Archangel Corps, who is resentful of the lavish lifestyle of the city’s rulers. “You’re the lady of the city, head of this rotting corpse. The V1s are starving under your feet, living like rats in the tunnels. And you live in a palace built with our bones. You want to know why I deserted? I couldn’t stand protecting parasites like you,” she tells Claire, justifying her actions. Claire seems to be trying her best to raise the conditions the V1s live in, planning to give them several floors of one of the hotels (which, remember, David Whele then had torched). How many people live in Vega, and how many in the terrible conditions Zoe describes? It’s not possible that in the 3 months that Claire has been Lady of the City, that conditions have gotten so much worse, so this is a festering problem, beginning long before Claire. Has something happened in the city to make things so much worse? And if so, I think we can all guess that David Whele is behind it. 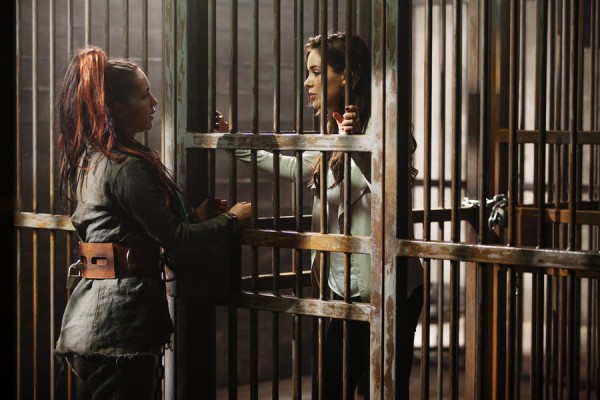 Claire accuses David of setting up the assassination plot, but he denies it, and says it would be too destablizing. “The V1s hate you, Claire,” he throws at her. Stunned, she replies, “They don’t hate me.” “Don’t they?”  What’s the solution to the David problem? Arika finds an 8-ball that they can be a weapon to manipulate him, using a box of items belonging to the human the 8 ball took over as bait. The 8-balls have an unnatural longing for the things that belong to their former life, she explains, and she trains the angel to be seductive and pliant. Offering a picture of the former human as an inducement, they get Rose, the 8-ball, to enter David’s quarters and begin to seduce him, and all of this is filmed. On the strength of that deception, that David is seen to have had an affair with an 8-ball, Claire hopes to get David out of her way. But David is more devious than Claire could ever be – I’m looking forward to seeing what he does to retaliate – and you know he will. 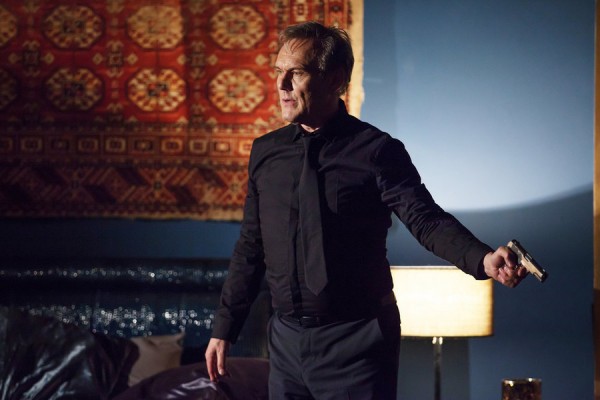