The latest episode of Dominion, Lay Thee Before Kings, embodied some of the things that I like best about this show – and some of the things I like least. New Delphi has truly been the most interesting of the locations we’ve seen so far (and I’m not the only one who feels this way, according to the poll I put up a couple of weeks ago) – now that we seem to have left Mallory behind, at least for a while, and we haven’t yet ventured to Helena, we bounce between New Delphi and Vega, with some Biblical flashbacks mixed in for good measure. 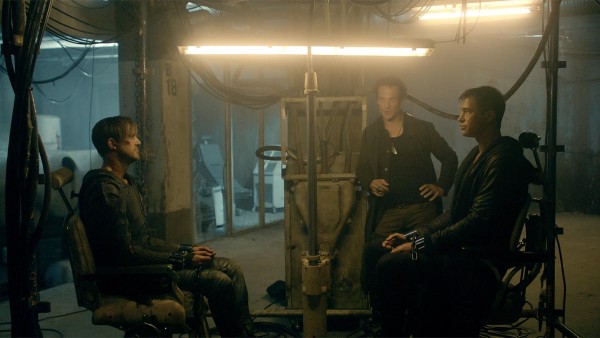 Julian. Wow! His hatred for the higher angels, particularly Michael and Gabriel, has made him obsessed and twisted. As he chains them to his electrical torture device, he explains to them that it’s the human side of his dyad nature that’s given him the ability to consider this behavior. “Being a dyad has advantages that no angel can imagine,” he says. “I get to tap into the nature of the beast – human nature. The thing that separates us truly from them – hatred. They have the capacity to despise one another in a way that we angels just can’t comprehend. And they’ve honed that hatred through centuries of practice. Torture being one of its crowning achievements.” These angels aren’t what us humans have ever thought they were either – they are certainly not beings of pure love, of God’s benevolence and protection, an ideal of what Man should strive for. If they were, no angel could be an 8-ball, with murderous intent, and a base nature that manifests itself in so much physical ugliness. We are shown angels that would be more at home in our concept of Hell, with jealousy, greed, and a will to harm at their core. Even the best, or what we believe to be the best – the archangels – are not benevolent protectors, sitting on our shoulders to warn us of danger and keep us from stepping off the curb, at least figuratively, into the oncoming traffic of Lucifer’s imagination.

Julian’s learned from these higher angels – both Gabriel and Michael are killers without much in the way of remorse or guilt. They’re both learning, it seems, and maybe in that, they – and we – will find some kind of redemption; but Julian seems past that point. He plans to torture them until they break, then take one of their bodies for his own. 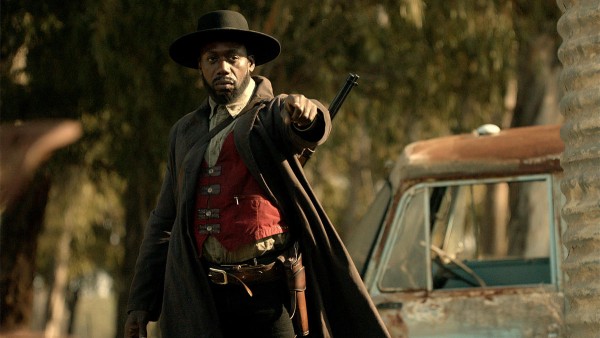 New mystery that’s very intriguing – who is the man in the hat? Is he Mallory’s prophet? He saves Alex and Noma from an 8-ball attack by pointing his finger and burning the attackers to crispy critters. And then he questions Noma – “Is he really the Chosen One?” He directs her to take Alex east. What’s in the east? Mallory is in Alabama – is that where he wants them to go? And will they obey? Alex is determined to get back to Vega and protect the city, but with Gabriel more or less moving toward an acceptance, at least of Michael’s belief in him (which of course, Alex doesn’t yet know), do they need to head to Vega?

And the Biblical flashbacks were revealing. Revisionist Bible history (and how is it that the protesters have targeted Lucifer, Fox’s mid-season replacement show about the Devil, but haven’t raised a ruckus about this show? That’s a question I’ll have to ask Vaun Wilmott, the show’s creator…). Michael brings up the time when Gabriel was himself looking after a “chosen” child. As they begin to get worn down from the electricity from Julian’s “homemade toaster,” Gabriel seeming much more affected than Michael, Gabriel says, “I haven’t felt this weak since…” “Since you were a man. When you were your best self,” Michael reminds him. “No. My worst,” Gabriel reflects. How does that happen? How can an archangel leave behind his angelic essence and transform into human, and then back again? And why would he have to do that – slumming? 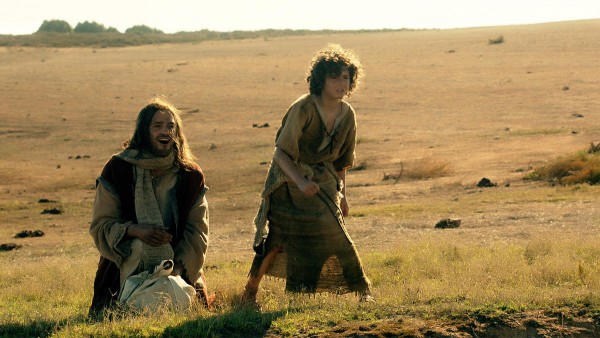 But it turns out that Gabriel was caring for David, the boy who would have been the Bible’s great King, as the child’s father, training him to fight against a warring nation. And yes, you can see the best part of Gabriel here – the loving, generous, paternal side, seeing his brother on the sly, and then the pride he has when David whips that rock RIGHT THROUGH Goliath’s head! But David’s death at the hands of a jealous King Saul, who threw the child off a tower when he believed that David threatened his popularity as ruler, was one of the nails in the coffin of Gabriel’s love of mankind, which we’ve seen in other Biblical flashbacks. 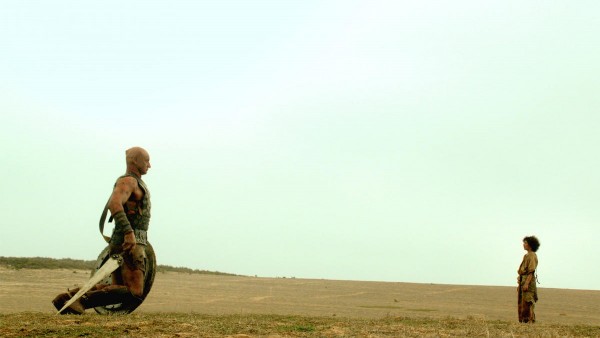 But toward the end of the episode, brotherly love turns Gabriel’s heart – he tells Michael that he doesn’t believe in Alex, but he knows Michael does – and sacrifices himself in order to let Michael free to help Alex. And Gabriel tricks Michael into leaving without him, so he can stay behind and try to kill Julian. Good luck, Gabriel – like cats, Julian seems to have nine lives.

Loved it, but not sure if it works or not – 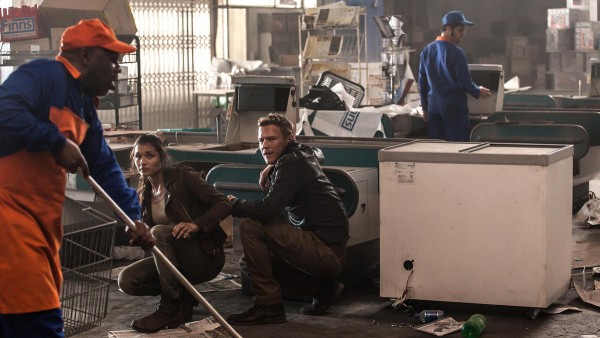 The shopping scenes. I have to say, this was one of the wittiest scenes we’ve seen in a season and a half of Dominion. This isn’t in any way a criticism – the show is generally extremely well written, but it isn’t meant to be a comedy, and while there are definite flashes of humor, there hasn’t been much laugh-out-loud banter. But this bit, with Noma and Alex meeting up with the 8-ball clerks and store employees, had me near tears. Alex rummaging through a magazine – “there are some really interesting articles in here.” “Are you really going to pretend to shop?” Noma asks him, almost horrified. And she explains to him why the 8-balls are behaving the way they are: “Lower angels aren’t that different from humans. Each one has a personality. Some are smart, evolved; some primal, dumb as a box of rocks.All of them are obsessed with the lives they took. Maybe this is where they were happy.” Beep…. beep….. “Maybe we should speak to a manager.” But as much as I liked it – was it filler? Or was there a point? And does every scene necessarily have to further the story? Can some just illustrate the struggle and the world around them?

And what doesn’t work – 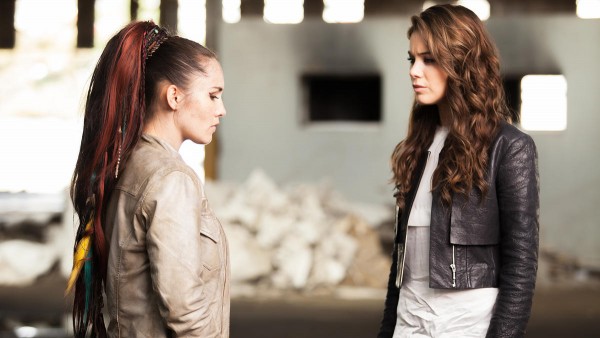 Almost anything in Vega. Literally, almost nothing works here. Not Claire’s attempt to call a truce with Zoe. Not her out-of-nowhere relationship with Gates (and honestly, I’m not crazy about the budding relationship between Alex and Noma either – I realize they have a history, but I think that the Alex/Claire love affair must have been much more casual in its intensity than we had thought). I like that David Whele doesn’t seem to have a shred of decency any more, not that he ever had much, but if he ever has a “come to Jesus” moment, it will really ring false – he’s a crazy ass bad guy and is getting deliciously worse.

Claire is supposed to be several months’ pregnant – could anybody tell? And I suppose it’s possible that a shot to the leg could stress a body enough to cause a miscarriage, but it really seemed like a throwaway. “The pregnancy storyline isn’t working out…can’t figure out where this is going… we need to find a way to get out of it.” 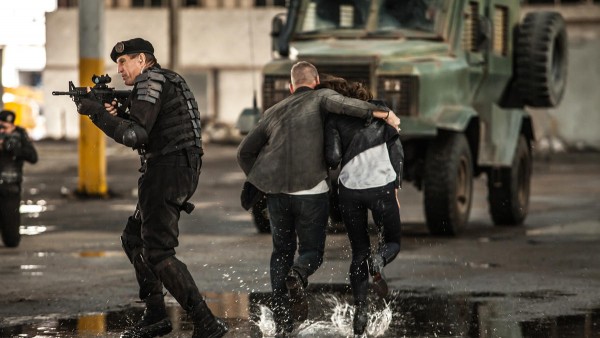 The class war between the V1s and the higher Vs promises to be exciting, and I’m looking forward to seeing where that goes; and of course, Arika and why she wants to get control of Vega, and how she’s going about it, is extremely intriguing, but we’ve now passed the season’s halfway point – I’m impatient! Yes, hopefully we have several more seasons of this truly original show to get into everything, but I want to know it all now! What do you think – what’s Arika’s deal? Are you ok with Claire/Gates and Alex/Noma? (no, I’m not going to give them “shipper” names, don’t you do it either.) I realize there are things from this episode that I haven’t touched on – Clementine, etc. – but we’ve got time to get to those. For right now, I just want to hear more of Archangel Michael’s voice, and then I’ll be ok.