Killjoys: Ep. 8 Review – Come the Rain – An Umbrella’s Not Enough

The previous week’s episode of Killjoys was heartbreaking on so many levels. Once again, the episode showed why this is one the summer’s best new shows – and why it deserves a second season. From Dutch explaining why she needs to find Khlyen:  “He’s holding pieces of me hostage. Truths about my life I can’t get from anywhere else. Good or bad, I just want to know my own story,” to D’Avin asking for the memories of his biggest nightmare to be restored rather than deleted, I truly felt the pain these characters were going through, and suffered along with them.

This week, the team – fractured, damaged, broken – is trying to get through the fallout from those secrets. D’Avin has started to understand what happened to him, but Dutch is no closer to figuring our her mystery. And she’s got something else hanging over her – the deal she made with Qreshi Delle Seyah Kendry. Nothing new happened on that front this week, but it could at any moment. What, really, does Kendry know about Yalena?

So this week, Johnny is up and moving after 10 days’ recovery from being stabbed by his brother. Pree says he’s been “officially allowed to serve you poison again.” I love Pree (Thom Allison) – and Bellus (Nora McLellan), and the other supporting characters. They truly make this a wonderful show! Much of this week’s episode takes place in Pree’s bar, the Royale, and we get to see a little bit more of it. Pree stood by Johnny’s bedside last week; this week, Bellus gives D’Avin a solid strike for what he did, even if it was out of his control, to  Dutch. A great show has great characters. Killjoys has a lot of them. 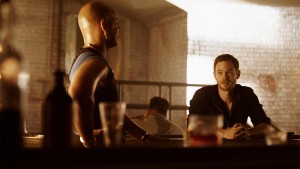 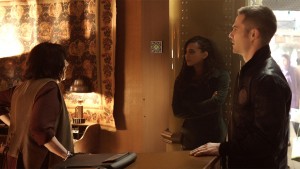 How is everybody holding up after last week? Dutch is having random sex, and not looking like she’s getting much out of it. D’Avin’s trying to make amends. And Johnny’s trying to mend the camaraderie of his team – Johnny’s a fixer. As an acid rain storm comes over Old Town, Johnny sends Dutch and D’Avin out on a warrant he has taken on – a simple delivery. But nothing’s ever really simple. They find out that they have to play a game of truth Jenga – “What’s your favorite memory?” “How did you first greet Johnny?” And they’re doing great until the final question – “Do you trust D’Avin?” Dutch isn’t really sure what she feels, and can’t get the question right. So they talk. “How did you end up a Killjoy?” D’Avin asks. “I learned three specialties from my harem – killing, dancing, and marrying into royalty – and the last two aren’t hiring.” And when they try to dance together, that’s just too much for Dutch, and she once again runs away.

But D’Avin wants to make this right – not only for Dutch but for himself. He’s finally found a place – where he can do a good job, reconcile with his brother, and explore a relationship with a fascinating friend and lover. But it’s all unraveled, and she won’t even look at him. “You have to stop being so polite. Yell at me. It’s ok to hate me, it’s normal!” “Normal won’t work here, that’s why I’m angry. If anyone – if the real you – hurt me or Johnny, I’d know exactly what to do. I’d kill you. I’d mourn you, and I’ve move on. But this… is so much messier than that. You’re as much a victim as we are, D’Avin. So I don’t get to hurt you, I don’t get to hate you. And I don’t know how to move on.” So D’Avin sets up a little game of knife throwing to give Dutch a target to “hate, hurt and move on” – and Dutch learns that she really doesn’t trust D’Avin – or herself. Is this the end of our team? 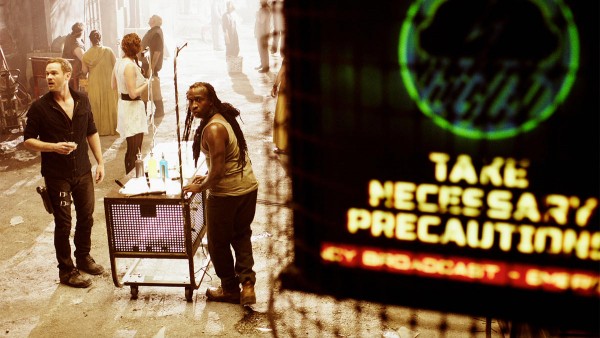 I was a little queasy with the acid rain coming down on the bolted-in prisoners – how about you? Just shows how ruthless the Company is with the citizens, and why there’s a revolution brewing. Johnny’s locked in the Royale with a group of men who have just stolen papers allowing a number of 7th generation Westerlyns a chance to move to Leith and get a better life – but 4th gen is trapped. And desperate. A Company alert about the theft identifies the perpetrators in the bar to a security agent – who shoots the ringleader. And Pawter, beginning to suffer from Jak withdrawal, has to take care of him. Here’s another fascinating supporting character – as we learned a week ago, she’s a member of one of the 9 families, disgraced and making a living on Westerly.

Johnny has to help her get a hit so she can continue surgery on the thief. Alvis, the Church leader and another great, unique character, leads him out through city tunnels to a dealer contact. His blessings to the poor – blood from a self-made cut (“My blessing is your redemption”) somehow give them a little hope. Alvis tells Johnny that 1 out of 10 is part of the Resistance. The rest are just downtrodden, trying to find a way to live. They bring back one dirty hit of Jak, just enough to help Pawter get through surgery – but with Johnny’s help, because she doesn’t completely feel like she can manage. Afraid, she tells Johnny that she operated on man once while high, and killed him – and instead of going to jail, she was shipped off to Westerly. “I’m a failure with rich parents.” 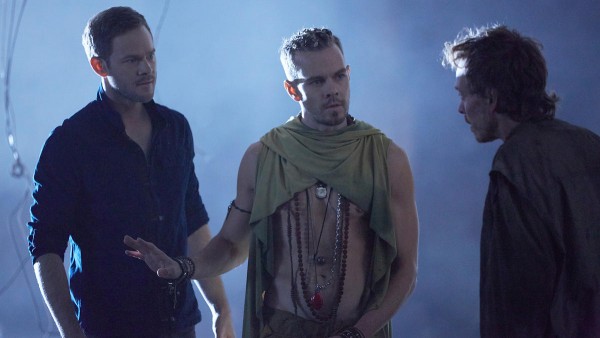 So surgery is over, the man lives – but the rest of gang discovers that the Company security guy has a beacon and that the Company is coming. He’s kicked out into the acid rain, and Johnny, the fixer, risks his own life to getting him back. Johnny’s getting tired of being the one that has to take care of everything – always having to be the “masochist and martyr,” as Alvis describes him. “In the last 10 days, I’ve been attacked by face-hugging biotech, stabbed by my brother, had major surgery, helped perform major surgery, been beaten, bullied and burned. I am done fixing things.” And when pushed by the bad guy for his plan, he kills that one and the rest of his gang. “Oh, I have a plan. But you wouldn’t like it.” No more Mr. Nice Guy! 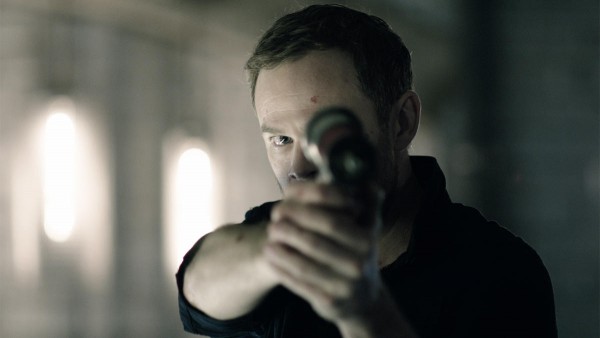 Alvis has told Johnny that Westerly’s lower class is fed up. And the Company guy who was stuck in the Royale was there to deliver intel to Alvis as one of the leaders of the revolution: “We’re stockpiling weapons and troops all over town.”

Nobody gets that Johnny is ready to stop being the fixer, least of all D’Avin. Getting back to Johnny after failing to make things right with Dutch, he tries to buy his way back into Johnny’s good graces with a comic book (and did you notice the cover moves? Cool!). But Johnny’s not having it – “John, I’m sorry I hurt you.” “So you bought me a comic? You bought me a comic to apologize for stabbing me? You  have no idea where you even began to mess up.” D’Avin thinks it goes back to their parents – and it does, but he doesn’t really understand what it cost Johnny when D’Avin left him alone – education, his home, his family. “OK, thanks for playing, but you failed to provide a complete answer.” And until D’Avin can get what Johnny went through, Johnny’s not ready to forgive. And he’s certainly not ready to forgive D’Avin for sleeping with Dutch,  “the one person I asked you not to.” But while he won’t forgive D’Avin, he’s more willing to allow Dutch to regain her place in his life – she’s had his back for years, they’ve been partners, she’s never left him. So they share a quiet moment rebuilding their friendship. There’s still tension, but much easier to resolve. But to Johnny’s original question – “Are we a team?” No. No, we aren’t. Not yet, maybe not ever again. And they’re all grieving for that. 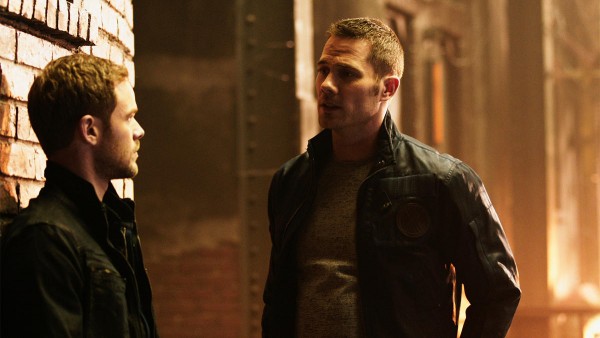 But D’Avin’s had his share, don’t you think? Whatever their homelife growing up was like, it obviously drove D’Avin in a different direction, but one that took as much from him as Johnny’s path did. It’s obvious D’Avin hasn’t had a great, fulfilling couple of years either. Johnny has some understanding to do as well. And until both brothers can accept and understand each other, the team is broken.

Loving the music in Killjoys? I certainly am! A fan, JWCollection, put together a video playlist of music used in the show so far. Check it out: