So it’s all Johnny’s fault that Khlyen has come back into Dutch’s life! She spent several years trying to build her sense of self and her confidence up – and Johnny goes and takes a Level 5 warrant to rescue D’Avin. Dutch didn’t even take the warrant herself, and never planned to take a Level 5 – kill – warrant. To Khlyen, who didn’t know it was Johnny, this was the “signal” that Dutch was ready for whatever it is he had planned for her. Ready? To be able to kill on command? Or…. ??? And now Dutch has to find out not only what it is that Khlyen has in the works – obviously something huge, deadly, long-planned and highly scary – but she may have the opportunity to find out who she is, why she was raised the way she was, and with any luck, at the very least, get herself out Khlyen’s grasp.

D’Avin, roughing it in one of the Royale’s squalid little sleeping rooms, taking any small warrant he can get on his own, has a run-in with Alvis and the monks. He accidentally upsets a cart stuffed with weapons. Alvis seems to be going beyond the “my pain is your redemption” – straight to “your pain is our Revolution.” As D’avin told him when Alvis gave him a book of the history of their faith for Johnny, “you’re a creepy little dude.” (“thank you,” says Alvis.) 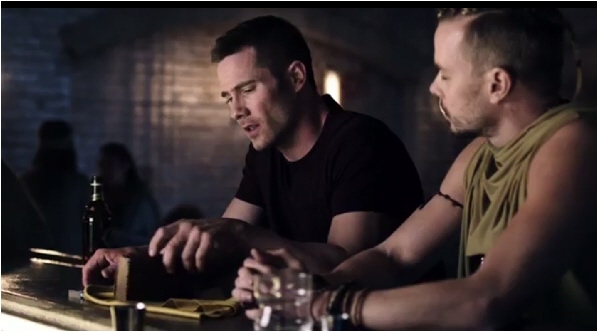 Johnny, with biotech expert Carleen’s help, uses the neural link they took off of Dutch in her earlier encounter to help her locate Khlyen – and what a surprise when she figures out that he’s in the RAC! THEIR RAC! What the he…ck is he doing there? What does he have to do with the RAC, much less be treated like a prince (or an executive)? (an aside – how is she dressed in skimpy workout wear while she’s in “real life,” and completely dressed in her projection?)

And Dutch is having some qualms about going up against Khlyen. She’s had some memories of times when he cared for her. “He’s always protected me. There was a time when he gave me hope, when I needed it the most. For better or worse, he’s made me what I am.” Her difficulty is clear – he was, as she says, her “surrogate father.” He told her that her real father tasked him with finding and training her, helping her to bring honor back to the family Yardine (one of the 9?). “For better or worse,” she says, “he made me who I am.” 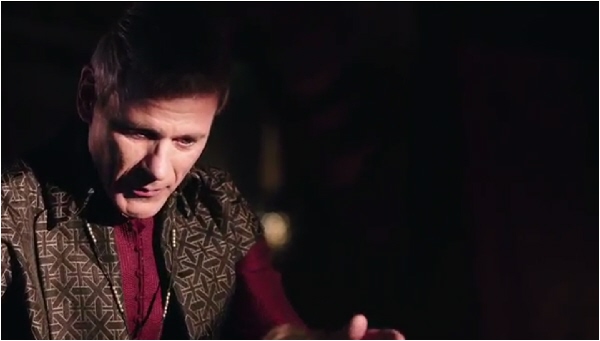 But Johnny has no such divided loyalties. “Bullshit. Six years ago, I came through that door to steal the prettiest ship I ever saw. Instead, I found a half-feral beauty in a wedding dress, covered in blood, with a gun pointed at my crotch. But after all this time, you’re still more your own person than anyone else I’ve ever met. The only credit Khlyen gets is for the bruises along the way.” And he’s ready to help her heal those bruises, and stands behind her all the way.

If you want to fight, I’ve got your back. And if you want to run, I call shotgun. But you’ve got to decide, Yelena. We don’t have to stay here. We can fly away and never look back.

So they develop a plan to go find him – and Dutch decides to pick D’Avin up along the way. “He’s good with tactical,” she explains. Yes, they need another pair of hands, feet and eyes for this one. And D’Avin has a little helper of his own – a piece of weaponry he’s cadged from Alvis.

How many of you were worried when you saw the preview showing Dutch saying they were turning up at the RAC to “divorce”? Feel a little better? But the reality is almost worse – their ruse to get into the RAC is intercepted by Turin, who has no love for any of them (well, he likes “bossy” D’Avin, and quickly figures out that he and Dutch slept together, and concludes that the other Jaqobis – Johnny – is jealous). Officially, now, they are no longer a team; unofficially, I think they’re stronger than ever. 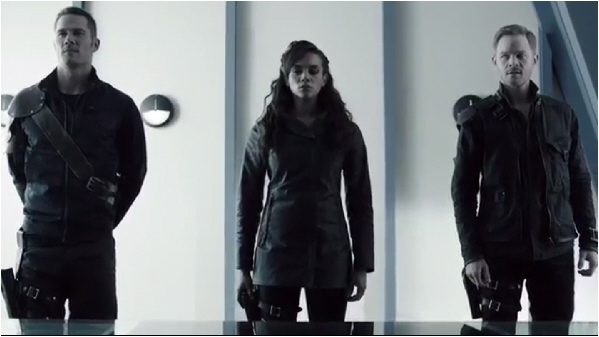 And D’Avin uses his little helper from Alvis. D’Avin got all the fun lines this episode – “Did anyone think that’d be cooler?” he asks when the Little Colonel doesn’t explode, just pops and causes the electricity to go out. While Dutch and Johnny didn’t know he was going to do that, it ended up being very helpful – not just for them but for Turin as well. “I know exactly who did this,” he tells his assistant. “Big dumb guy, smaller dumb guy and a bitch. We’ve just got to find them.” When he’s caught the big dumb guy, he tells him that the power outage also means no record of the interrogation – and he’s got an electric shock wand.  Turin’s never liked Dutch – he’s shown that several times. But why?

What do you want, Turin?
What I’m owed. Answers. What’s your little girlfriend got planned? Who is Dutch really? What makes her so special? You know she started at Level 5 – first time on record. All complaints against her get rerouted, offsite and disappeared. I just want to know who’s protecting her.
Dutch doesn’t need protection.
Then why’s she marked for Red 17? 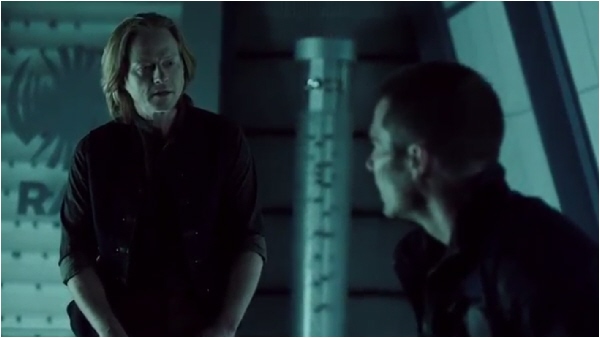 Red 17? So this comes back again, after their encounter with the deadly insane guy and the nanites. What does that mean, “marked” for Red 17? Does Turin know what Red 17 is? He tells D’Avin that he may be the only one on their side, the only one who can help them. Is Red 17 a group? An operation? When Dutch had the neural link to Khlyen, and discovered he was on Level 71 of the RAC, she told Johnny that the upper levels were only for officers who worked interstellar, setting up office all over the J, introducing the RAC to places that need order. Could Red 17 have anything to do with the resistance and revolution on Westerly, planning to “bring order” in a terrible, violent way?

Dutch finds Khlyen – who tests her, once again, in a fight. But he’s not angry, he’s ready to bring her into whatever it is he has planned. She, though, has a different idea – she blackmails him emotionally by threatening to kill herself if he doesn’t give her some answers. But the answers she wants are not those to the questions she should asking, he tells her. “Was it wrong for me to protect you all those years? They were making you a victim. I made you a weapon,” he tells her. “You don’t know what the RAC is,” he says – and obviously, neither do we. Nothing is straightforward or clear! “You’re asking the wrong questions.” He was expecting her, but not expecting her defiance, her vehemence and her questions. He thinks, based on that mistaken Level 5 warrant, that she will be more accepting of whatever role he has planned for her.

And, ok, I can’t forget to mention that odd, glowing plasma computer Dutch saw in her projection. Johnny captures Khlyen’s voice and uses it as the password to get into it – was all the data actually visible to him, albeit encoded? HOW COOL WAS THAT! But even though he’s saved it to his PDD, he can’t decode it – plans? battle plans? does it hold the answer to why D’Avin was used to try out Jaegar’s kill technique? 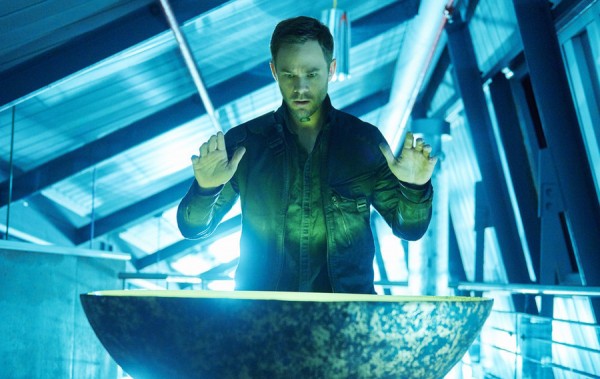 Turin finds them again as they try to escape, and shoots Dutch to keep her from leaving when she stays behind to let Lucy get free from RAC security. But Khlyen isn’t done protecting her – he puts a really nasty blade through Turin, and carries Dutch off to an escape pod. “Do you remember the story I told you the first time I tucked you in?” he asks. “The Wasp and the Bear,” she gasps. “Do you remember the moral of that story?” “They saved each other,” she says, and he simply says, “I need you to live.” “Who are you?” she asks desperately. “I am Level 6.” He sends her off to find Johnny and D’Avin. Turin isn’t ready to give up – “I know who you are. I know what you do up there,” he says, as he lays on the floor bleeding. “Let’s chat about that, shall we?” Khlyen replies, as he drags Turin off. 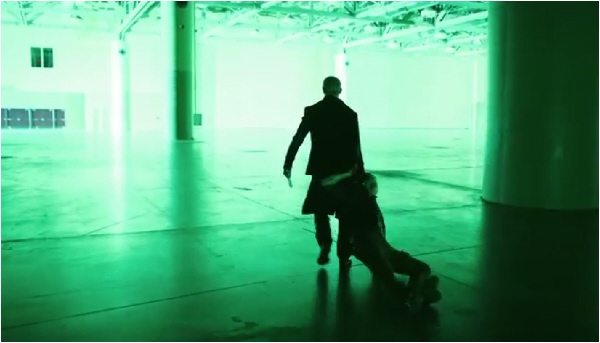 Life hasn’t stopped on Westerly – Alvis has been arrested on a likely made-up charge of organizing a massacre on Leith. Dutch gets back to Johnny and D’Avin, injured. But they’re ready to continue to fight – against what, they’re not sure – Khlyen? Red 17? All they know is, something big is coming. And I’m pretty sure it can’t be contained in just one more episode.

I’m so not ready for this season, much less the series, to end. With only one episode left, there’s no way Killjoys can satisfy all my curiosity about the world, the characters, and the events! We haven’t gotten to what Delle Seyah Kendry wants from Dutch, the coming Westerly revolution, why D’Avin was used as a guinea pig to kill his squad, where Pree gets his clothes… Renew Killjoys! 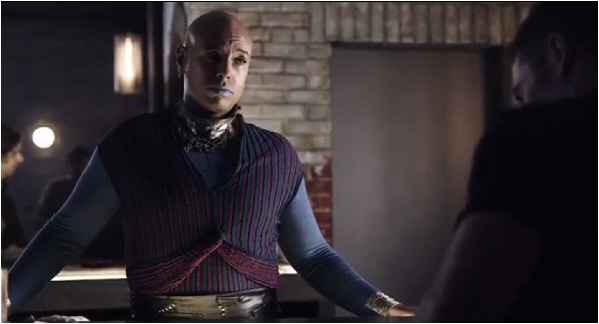 Be sure to check out this week’s Inside Killjoys!