What a finale! So many cliffhangers – how can Syfy not give us a Season 3? (and if not, we need to demand a wrap-up film, a la Serenity!) We lost one character; another sort of redeemed himself; and a third may have become a turncoat – again.

I loved the use of the flashback in these past two episodes (and again, I’ll suggest you run and watch Legion) – the memory was truly less about how Alex was saved than it was about the quality – or lack of it – of Noma’s character. Aligned with Gabriel, then with Michael because of a possible bit of divine intervention, and then – maybe – one more turn toward Lucifer? I have not been a Noma fan – and honestly, I don’t think Kim Engelbrecht has the acting chops to carry off this complicated character. Maybe I would have liked her better had she been played by a stronger actress, but maybe not. She’s jealous, opportunistic, loyal only when it serves her ends. 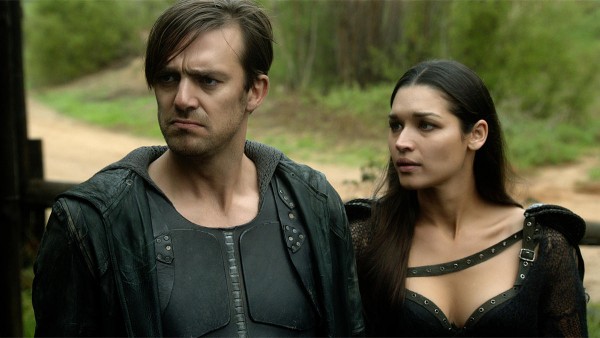 Alex’s powers are increasing – but we don’t know if he has any control. As the 8-balls ran toward him, Claire and Noma in the tunnel, he moved almost blindly toward them. Yes, he was able to perform the mass eviction – without causing the death of the possessed – but it took a lot out of him. What else will he be able to do once he gets control of his markings? 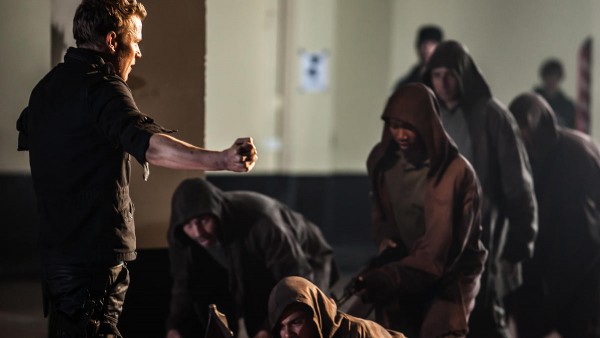 So many questions! Alex and Noma have a quick minute in between battles, and she asks him if he still loves Claire. “She was my life, my home,” he answers. “When I left Vega for that mountain, I left her. Truth is, I fell in love with another woman a long time ago. Just didn’t realize it… Guess I’m a slow learner.” Of course, Noma believes he’s talking about her, and that’s very gratifying to her – but is he? There’s been no “I love you” from him, no response when she told him last week that she’d be happy to die with the man she loves. I don’t think Alex is in love with Noma – there are obviously still feelings left for Claire, and he tells her he loves her as she dies – but who is he talking about?

And one funny moment in a very dark episode (and why are the lightest moments – the “beep beep” scene – always between Alex and Noma?) – who among us wouldn’t love to shoot out the speaker playing, well, elevator music?

Is Dyad Duma/Daddy Riesen really dead? Claire shot him, but that didn’t do it; then Noma shot him and he went through the window – but can you kill a higher angel that easily? IF we get a Season 3, I expect that he’ll be back, right at Gabriel’s side. The emotional daddy and daughter moment, as Edward was able to subdue the angel for a few moments, made Claire’s death even more touching. She was again the young girl we met at the beginning of Season 1, before death and the pressures of leadership turned her sad and hard. 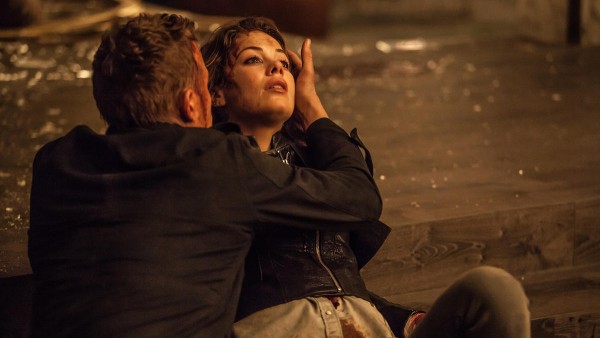 By far the most interesting part of this season finale, as it has been all year, was the drama between Michael and Gabriel. Michael’s made the decision to not fight his brother, as a show of his love. But that puts Gabriel ahead of Alex in the priority list, which seems to turn on its head what we’ve come to know about Michael. Alex has been his top priority since the day God left. Michael put everything else aside, worked against the entire host of angels, because he believed that Alex – The Chosen One – was the only hope that mankind had, the only way to truly bring Father back. Gabriel has been very straightforward, never wavering in his goal. And while we know that Michael still believes in Alex, he’s conflicted now about what is most important to him, preserving his family or preserving mankind. While I have no doubt that he would still defend Alex with every bit of his being, his decision to not even try to fight against Gabriel has threatened to take away Alex’s greatest chance at survival. Until… 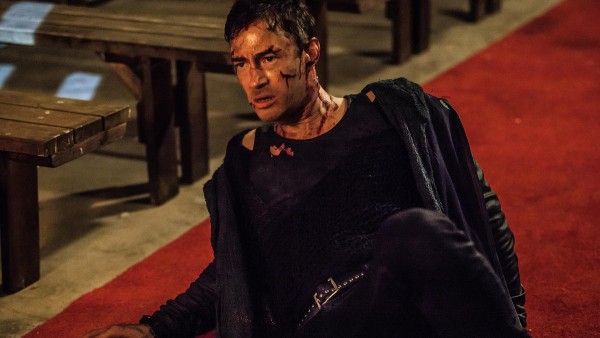 The Darkness makes Gabriel talk funny. But it’s not at all funny when he decides to see Mallory for himself and see if he can figure out the truth behind Michael’s belief that Lucifer may be part of it. And once at Mallory, the town affects him badly and starts to kill him. There’s nobody else around – the townspeople are all gone – and this mystifies Michael and angers Gabriel. What we learn about Gabriel and Michael’s history with their brother Lucifer is fascinating – and truly different from what we’ve learned from the Bible and Biblical scholars (but of course, this is all fiction and invention, so anything can happen!). They were sent to kill Lucifer – “He created this modern world,” Gabriel rails. “all of this ugliness. Lucifer gave the humans fire, knowledge, war… he went against Father’s wishes and changed everything.” Michael sees it from Lucifer’s standpoint – he loved the humans, and wanted to share with them and make them greater. But at some point, Father decided that Lucifer, “the greatest of us all,” Michael calls him, “the only one touched like Father with the power of creation,” had gone too far, and needed to be slain. Gabriel, perhaps out of some jealousy, or a need to the favorite, took this on enthusiastically, it seems, but Michael was more reluctant. “I couldn’t see his life leave the world in ashes. He deserved better.” And so, rather than burn – and destroy – his brother’s body, Michael dropped the body into the ocean.

And despite Gabriel’s taunting that “adding water” wouldn’t resurrect him, somehow Lucifer has come back. And now they know why Mallory was established – the sacrifices the townspeople make every five years gives strength to Lucifer’s regeneration. But why did the Prophet tell Noma to bring Alex “east”? To heal Lucifer, Michael figures out. He needs a greater sacrifice than the townspeople – “he needs the last pure heart,” Michael realizes with a sudden flash of dread. The Prophet tells Michael that the plan for Alex’s death is already in place, and that there are more than just him working for Lucifer – and where is Alex? In Vega. With Noma, the angel who has changed sides more than once. 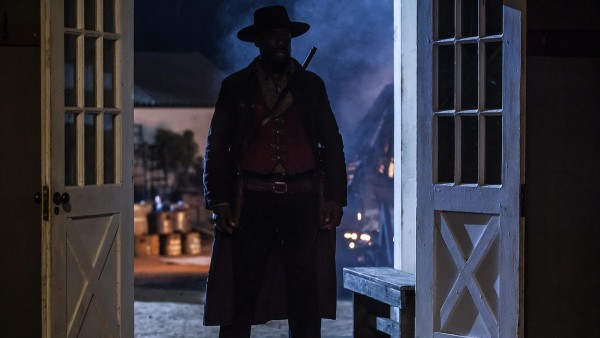 Is Alex the only one who can control the markings? In one of the episode’s final scenes, the same markings seem to be etched the ceiling of the grotto where Lucifer is rebuilding – can Lucifer control them? Or are they just revealed to him, without the ability to use them? And oh, we need a Season 3 – I’m dying to see how Lucifer’s regeneration affects the war!

So what really has happened with Noma? She fights alongside Alex in the last battle of the night. She kneels to him as he rallies the now-unpossessed humans. Yet, at the end, she reveals beautiful WHITE wings – she hears Lucifer’s voice saying “It is time,” and tells Alex “I took an oath to protect you, Alex, and when I gave up my wings, I gave up too much. I needed to be healed, to be whole.” Who healed her? And what did she have to do or to promise in return? Does Alex now have to fear Noma, his steadfast ally and protector, since he was a baby?

Julian, too, isn’t finished. We see him alone, railing at the unfairness of God. He has been passed over, reduced, beaten. He doesn’t care about the humans or their fight – he has his own fight, against the Archangels who took everything away from him.

I been this close to oblivion before. My death’s so near, I could reach out and touch it. This time, like all those other times, I remember – I remember those whispers I heard in that dark place.Yeah, my brothers and sisters, the lower angels, beseeching me to fight, to hope, to believe that there will be more, that you’re not alone. in a world where the tyranny of rank means nothing. Where there’s no eye looking down in judgment. There’s no Father to classify us. to put the few above the many. Here we’re all kings. Here we can revel, and rule. Do you see the future that I do? And our place in it? Because I tell you, my brothers and my sisters, that this is just the beginning!

Did you miss the #RenewDominion poetry contest? See all the excellent entries in these two posts:
Winners and Honorable Mentions
Other Great Entries

The Season’s Final Revelations – Helena, the City of Women