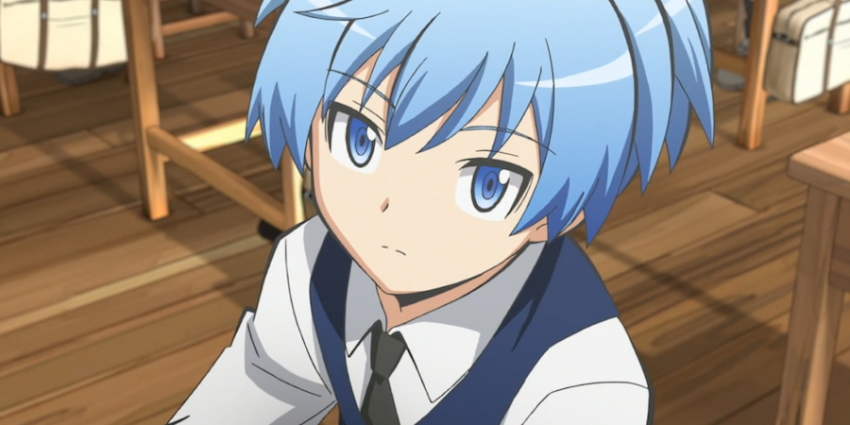 At Kunugigaoka Junior High School, class 3-E (Assassination Classroom) is the lowest of the low. With abysmal test scores and no future prospects, they’ve been given up on and hidden away from the main campus at the top of a deserted mountain. But when a super-powered tentacled creature with a thirst for destruction becomes their new teacher, they’ve got a brand new assignment to get them inspired about school: take him out.

In addition to reading, writing, and arithmetic, the murderous monster behind the lectern will teach his students everything he knows about the assassination game. Should some eager beaver prove to be a Grade-A assassin, he or she will save Earth from extinction – and collect a hefty reward. But they’d better study up, because their saboteur sensei has already taken out most of the moon, and our planet is next on his list!

Funimation became the first english dub licensee to launch dubbed anime titles within weeks of the subbed episodes airing in Japan and simulcasting in the US. It was far different from the nearly 12-18 month wait you would normally have before getting an english dub of a new anime title from anywhere else. The weekly talk show discussing these shows is titled Dubbletalk and Assassination Classroom was one of the first to take advantage of this new and surprisingly quick turn around of dubbing episodes. Whats even more impressive is that Assassination Classroom has a huge cast.

The show is a mix of slice of life, school anime that mixes some mystery and science into the life of being an assassin. Its honestly a very unique idea and its just plain fun. The series goes back and forth between being funny to being very deep and serious but handles itself well balancing that transition without feeling out of place with the overall story plot. Two characters in particular fit into both of these categories and slowly work their way to the extreme opposites of each other throughout the series: Karma Akabane (seen above) and Nagisa Shiota the narrator of the manga and in the anime.

Both are close friends but very opposite of each other. Karma the most academically gifted student and a smart ass who had a chip on his shoulder that is slowly peeled back in the first half of the season. Nagisa was widely looked at as the weakest student in E-Class, and was thought by many to be girl, but he quickly proves his skills as an assassin outdo even his good friend Karma.

Part 1 of the first season leaves us with a new student who claims to have a past and connection with Koro-sensai which is interesting considering we know very little about his past. The schools principle is another interesting character we know little about, but seems to have his own demons, or perhaps he is one? With all the deep and heavy anime out there right now, Assassination Classroom is a nice switch to fun, slice of life show with some life lesson moments, funny antics and a stellar english dub voice cast that is pretty hard to top.