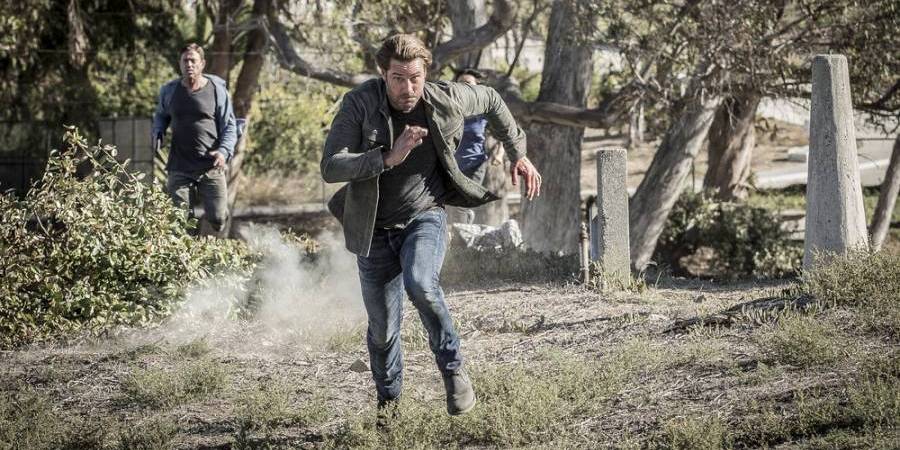 To say I (and perhaps many) have been awaiting this moment in Colony’s season 2 would be a gross understatement. After watching Det. Bob Burke needle Will Bowman and deliver derision and smirks throughout the bloc since his introduction, we finally received some satisfaction from him. All thanks to an orange soda.

In my mind, Ep. 209, “Tamam Shud”* is a turning point for the show’s second season. It feels like we’ve been heading toward this moment for a while now and when it comes, it comes hard, fast and with more than a little bloodshed. The bloc is a death camp and that discovery a few episodes back has changed everything for Will, Katie and those involved in their worlds. And yet, as much as it felt like a change of course in this episode, I can’t shake the feeling that seeing Burke take a broken bottle to the abdomen, courtesy of Will during a stroll in the park, was the night’s most satisfying moment. Hey Burke, I hope it hurt — a lot.

I”m such a fan of the writing on this show. Even when you know something’s coming, there’s always a little twist, a little turn or nudge that gives it a little more juice on the screen. I think it’s a real testament to the creators, show-runners and writers that they are able to deliver that kind of vibe so regularly.

The show opens with a man and woman in a small plane heading toward the L.A. bloc from the desert. The plane, spotted by drones, is attacked and shot down, but not before the two occupants bail out and fall to earth. One makes it, one doesn’t, and that sets the episode in motion. The survivor, a woman, falls from the sky into a pool, then makes her way out of the yard and goes to ground. The other flyer, a man, isn’t so lucky. He’s dead on the ground and we get our first always-warm interchange between Will and Burke. Why would someone want to fly INTO the bloc? Will examines the radio the man was carrying and then scrambles the frequencies. You can already see what he’s thinking — make contact with the survivor. 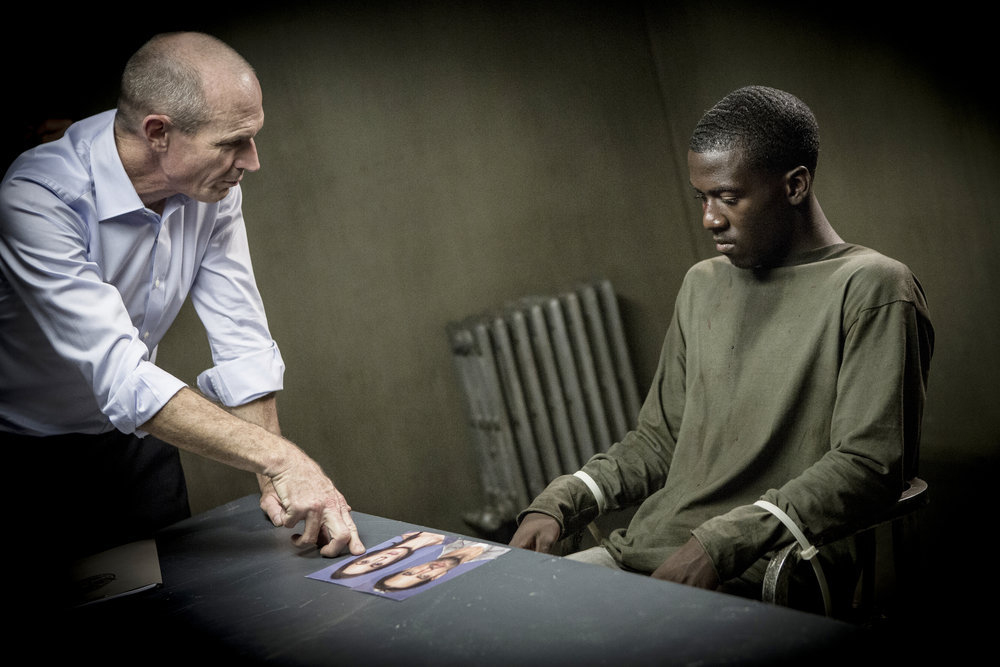 As a side note, while I detest Burke, I do enjoy his and Will’s interactions. The animosity and seething dislike they have for each other is so palpable. What a fun couple they make.

And as always, Proxy Alcala sighting is sure to inspire joy to all. Our new proxy seems obsessed with spinning every issue into a positive narrative for himself, but Helena isn’t really buying the Alcala hype. Our governor general surmises, correctly, that the plane duo may be after the artifact taken from the Host. Alcala prefers to sweep it under the rug and move on (What a tool). Helena sees the bigger picture and after coming “this close” to total rendition of the bloc, she’s not about to lose sight of what’s really important here. She’s on the wrong side of this conflict, but she’s a character I liked from the start.

Katie and Will discuss the plane, the jumpers, the radio and what to do next. Will goes off to work, Katie heads over to talk about things with Broussard. They head to the movie theater to meet with Henessey and discover his throat’s been slit. Broussard and Katie hightail it over to his work space and find the place tossed and the artifact gone. The Red Hand, it would appear, has been busy. I’m sure you’re as curious about this group as I am and feel fairly confident we’re going to get a peek inside soon.

Now, all this is just a prelude to the Bowman-Burke showdown that begins when Burke bursts into the office of his boss and declares “Bowman is working for the resistance.” Burke lays out his case against Will, citing the missing surveillance tapes and other evidence. He’s given the green light to dig deeper, but told to “tread carefully.” Yeah, Burke, you just tread nice and lightly…and wait. 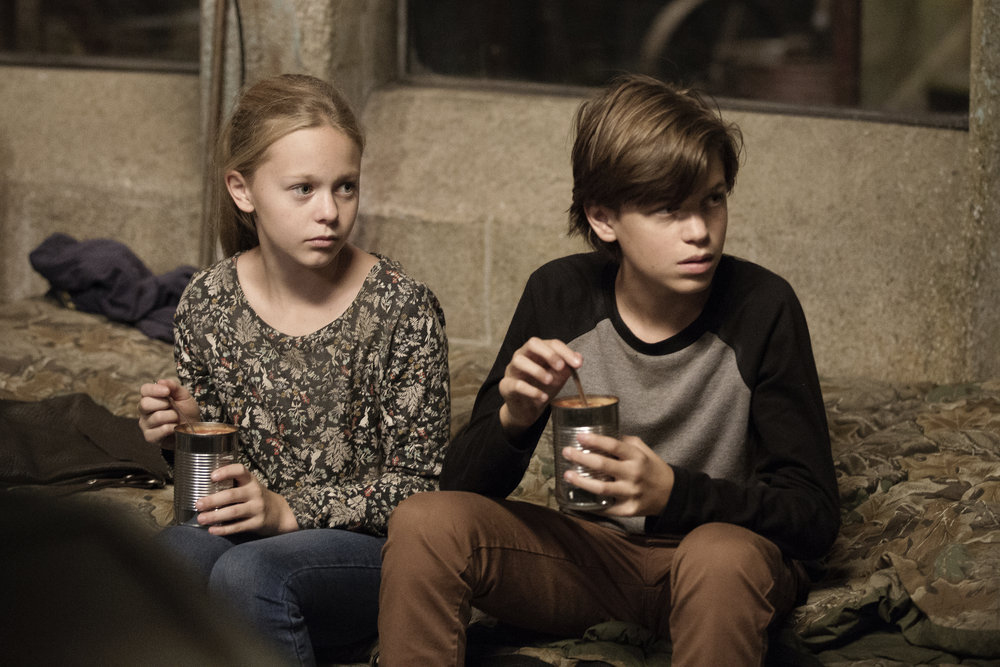 While Burke is digging, Will finds a shortwave radio setup and tries to make contact with the woman from outside the bloc. It’s an attempt he will get to replicate a little while later. Why? Because Burke breaks Emmitt, the young man from the safe house who was helped by Will. Now, he’s got the confirmation he needs and all hell’s about to break loose. Not only has Will been identified, but Katie was also tagged as Broussard’s accomplice in the kidnapping of the host in the subway. Honestly, I think Burke almost cracked a smile on that smug, self-righteous stone-of-a-face of his. He’s got a chance to deliver the whole Bowman clan…and he likes how it feels.

While Burke takes the Bowman kids hostage as leverage, he and his minions track Will and set a trap for him and, he hopes, his Katie. Will spots the tail and allows himself to be taken after warning his wife and Broussard. Now things are going to get fun. Will not only talks Burke’s superior into letting him try to contact the survivor from the plane, but in their lust to get Broussard, they want to let it all play out as an ambush when the pilot makes contact.

The time has come for Will to wholeheartedly make the jump to the other side. Burke’s dogged determination to sniff out Will’s motives has pushed him to where we all knew he wanted to get to. While Will meanders through the park looking for the contact, in another part of town Broussard and Katie rescue the kids in a quick and bloody gun battle. Burke comes to Will and wants to suddenly end the operation, which tips Will off that the leverage Burke had via his children is gone. It’s at that moment of realization the magic occurs. Wait for it. 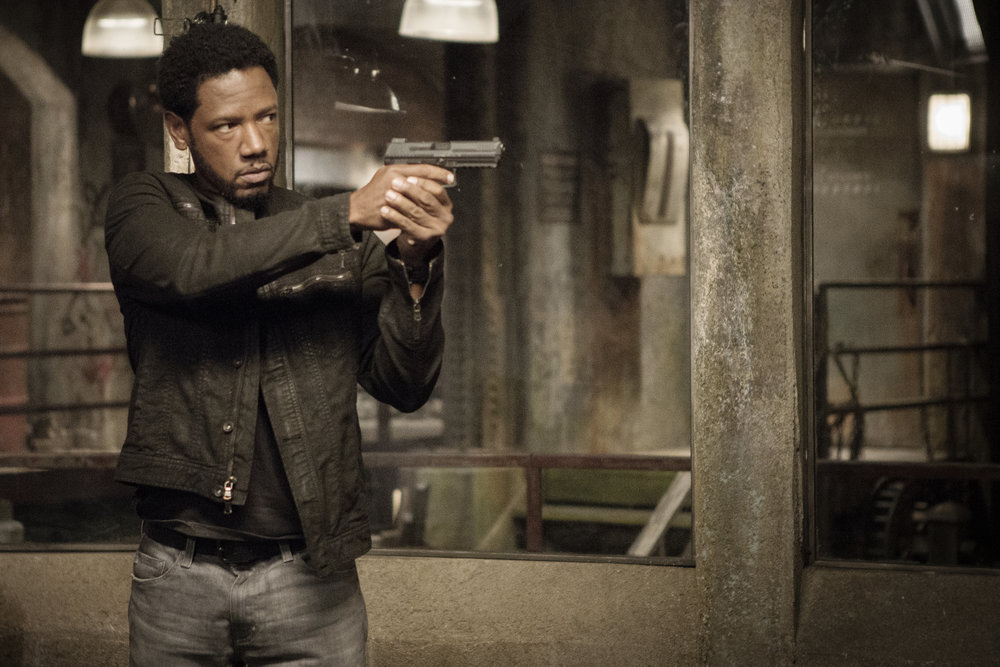 Will, who’d just bought a bottle of orange soda, cracks it over a metal corner, wheels around and guts Burke like a freshly-caught trout. He then takes off in a dead sprint for safety. Everything after this is icing on the cake. Will manages to escape with a little help from our plane survivor, the kids are safe and the resistance trifecta of Broussard, Will and Katie begins to come into focus.

Proxy Alcala and Governor General Helena have a pleasant conversation about the botched plan to capture the pilot and what’s been going on in the bloc. Helena wants to bring in some folks to help, but Alcala balks, saying he has faith in his people. It is in the moments after that meeting that Helena picks up the phone and utters the words we’ve longed to hear — “Get me Alan Snyder.” And just like that, through all the deceit, deaths and destruction, we realize that all’s right with the world. Snyder is about to return. The Phoenix has, indeed, risen from the ashes.

The die is cast now for the Bowman clan. They are considered hard-core resistance and while they hope to get out of the bloc to a safe locale they’ve learned about in the desert, there’s work to be done first. The gauntlet is sought by a resistance group outside of the colony. And it sounds like a fight is coming to the Raps in the very near future. At a meet with our missing woman, Noah, she tells Broussard and Will that, “I’m here, because the real war is about to begin. And that thing you stole, it’s gonna help us win it.”

If that isn’t change in the Colony air, I don’t know what is. As always, the road to discovering just what that change may be is going to be a good one.

* Tamam Shud, in case you were wondering: The Tamam Shud case, also known as the Mystery of the Somerton Man, is an unsolved case of an unidentified man found dead at 6:30 am, 1 December 1948, on Somerton beach, Glenelg, just south of Adelaide, South Australia. It is named after a phrase, tamám shud, meaning “ended” or “finished” in Persian, printed on a scrap of paper found months later in the fob pocket of the man’s trousers. This scrap had been torn from the final page of a copy of Rubaiyat of Omar Khayyam – a collection of poems attributed to the 12th Century poet Omar Khayyám. (from Wikipedia)

Join us on Facebook at Colony: The Resistance to talk about the show!