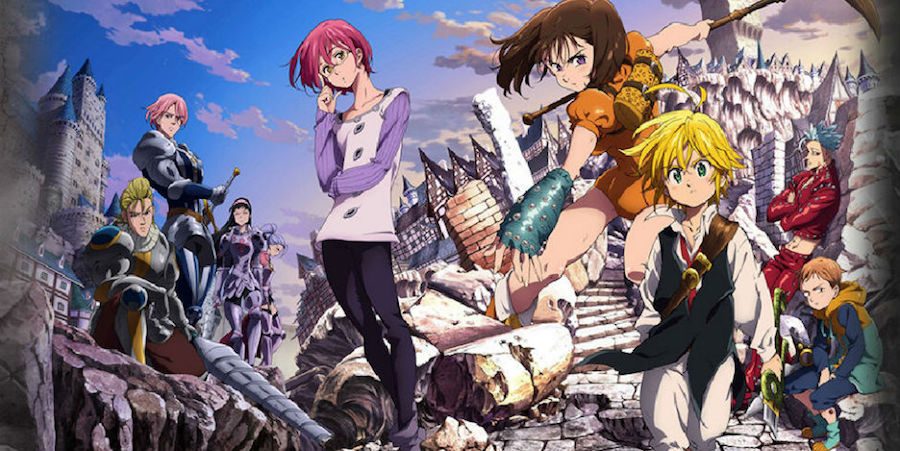 The Seven Deadly Sins were once an active group of knights in the region of Britannia, who disbanded after they supposedly plotted to overthrow the Liones Kingdom. Their supposed defeat came at the hands of the Holy Knights, but rumors continued to persist that they were still alive. Ten years later, the Holy Knights staged a coup d’état and captured the king, becoming the new, tyrannical rulers of the kingdom. The third princess, Elizabeth, then starts out on a journey to find the Seven Deadly Sins and enlist their help in taking back the kingdom.

I am a sucker for stories that involve mythological creatures and gods. I find it even more appealing when they make them unique and different. The basic backstory of the Seven Deadly Sins was rather simple. They were accused of plotting to overthrow the kingdom. So it was rather predictable that they were in fact not the bad guys in this. Framed from the start, the princess has come to find them in order to band together to fight the Holy Knights.

Meet The Seven Deadly Sins (well at least 4 of them) 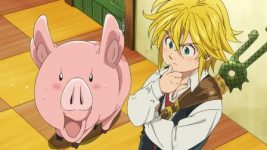 The first of the Seven Deadly Sins that we meet is Meliodas, Sin of Wrath and the former captain of the group. He looks nothing like his wanted poster. In fact, he looks like a teen age boy with blond hair. When he first meets the princess we find out that he is a terrible cook and a perve. That is the one anime troupe that I just can’t stand, the main male protagonist who is a pervert. Meliodas is much older than he appears and seems to be hiding a rather dark power when he is backed into a corner. At the end of the first half of the season, we see that power come out and it is hinted based on Ban’s reaction that it is demonic in nature.

The next of the group we run into is Diane, sin of Envy. She is a member of the Giant’s Clan and is over 30 feet tall. Most people run away when they see her. She is in love with Meliodas, though he doesn’t seem to share the same feelings. She gets fiercely angry any time he shows affection towards another woman. 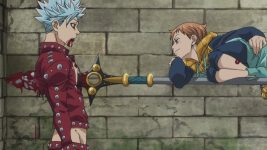 Ban, the sin of greed, enters and we get the most information on his tragic back story. Ban fell in love with Elaine, the guardian of the fountain of youth. He originally went there to drink from the cup and become immortal. However, he found out from Elaine that if he did the forest would die. So he stayed with her for 7 days before they were attacked by a demon. Turns out that Elaine was King’s sister.

King was the last of the group we met in the first half of the season. King was the sin of sloth and went by another name, Fairy King Harlequin. He left his sister alone to guard the fountain several hundred years ago when he went to look for his best friend. However, after learning of her death, he believed Ban was to blame and vowed to hunt him down. Though his wanted poster showed him as an older overweight man, his true appearance is similar to Meliodas. He looks like a young boy wearing a hooded sweatshirt.

The Story So Far

As the group got together, they ran into several Holy Knights who tried everything to stop them from continuing to gather the sins back together. The rift between King and Ban was put to rest in the first half after learning of the truth cause of his sisters death. However, the group is finding it difficult to fight this new generation of knights. Turns out they are using demon blood to boost their magic ability.

King is the only one with his sacred treasure, so they decide to seek out the other sacred treasures. The first up on the block is Diane’s hammer. At the festival they fight to win the hammer but the festival doesn’t end as planned when a faction of the Holy Knights shows up to kill the deadly sins.

Meliodas is sucked into a gem of some kind and nearly taken away along with his sword before Elizabeth’s cries for help bring him out of it; however something isn’t right. When he does come out, he isn’t himself and Ban can sense it. He has the same vibe from Meliodas as the demon who attacked him and Elaine at the fountain of youth. Just what is Meliodas? 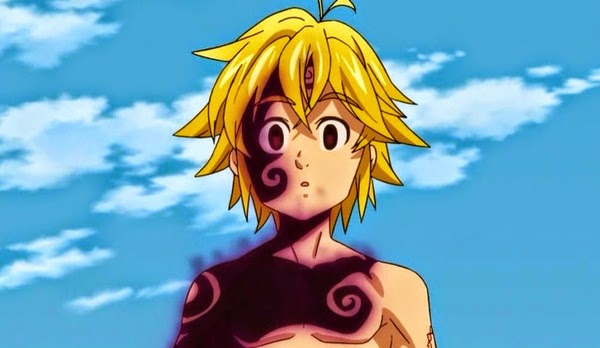 There are a few plot points that stick out as troupes but for the most part the anime is fresh and fun. The twist on the classical mythological characters is a lot of fun to unravel. The writers did a good job of keeping the majority of the secrets to the sins back stories from being revealed too early. Though you could probably figure some of it out if you were paying close attention.

For the first 12 episodes of the series we would give it an A-. The series is currently streaming dubbed on Netflix and is available on Blu-ray and DVD from Funimation.