The fourth episode of the season continues to be excellent quality television.  There was a lot of story building in this episode, so it made it a little bit slower than the past three.  Slower, in the sense that even though a lot happened it didn’t seem as though many of those events were extremely imperative to the story.  Except maybe Ra’s Al Ghul.  That does not mean it wasn’t still great!  Not one of the episodes they’ve put out the past two seasons have been bad. That fact is something I absolutely love about Gotham. Now about “The Demon’s Head” 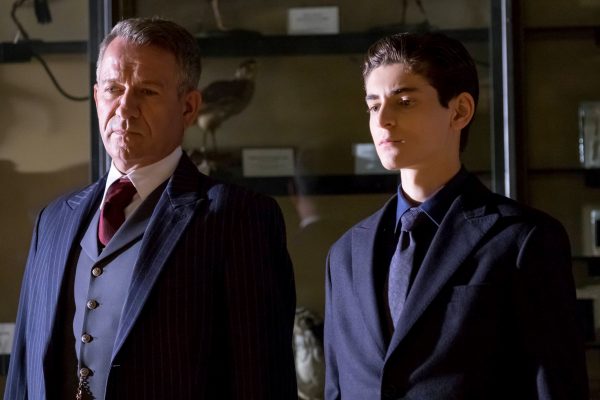 Bruce Wayne Has All The Power

As most Batman fans know, Bruce becomes the most powerful man in Gotham.  For now, he’s just a kid trying to find his way.  Things shift when he decides to outbid Barbara on the dagger.  This isn’t just any dagger, it’s a dagger Ra’s Al Ghul is after.  Bruce decides to take it upon himself to buy this thing and figure out what it does.  By doing this, Bruce takes a lot of responsibility into his hands and unfortunately he isn’t equipped to handle it yet.  The dagger is “The Demon’s Head”, or belongs to the Demon’s Head and Ra’s is on the warpath to get it back.

Bruce brings other people into the mix while trying to decipher what the dagger is.  He gets innocent blood on his hands and it devastates him.  Gordon tries to take Bruce under his wing; he tries to tell him it wasn’t his fault.  Bruce knows better.  There was a really cute moment between Bruce and the young boy; Bruce became a mentor and comforted Alex as best he could.  It was really sweet!  Ra’s and Gordon face off.  Gordon gets Ra’s thrown into Black Gate, which is obviously exactly what Ra’s wants…. YIKES! 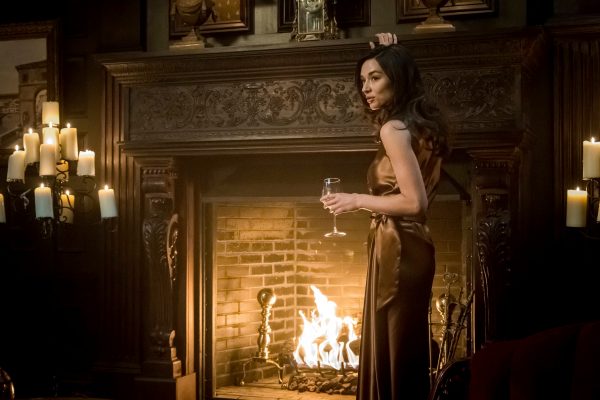 Move Over King, We Have a Queen

Oh man.  Crystal Reed is fantastic; she’s a true show stopper.  Sofia Falcone being back in Gotham is really bad news for Penguin.  He takes this challenge on head first and invites her over to discuss business.  She lies and promises that she’s not there to take anything over; she just wants to make sure the charities are in working order.  We, the audience, know this isn’t the truth but she plays it off so well he seems to believe her for a moment.  I can feel the build up between them and I know that something huge is going to happen before the end of the season.  Sofia is going to become evil, just like her father, and take Penguin down fast and probably brutally. 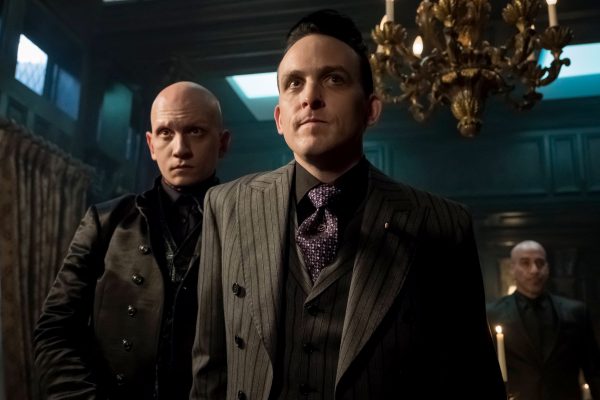 The Mighty Will Fall

Penguin, poor Penguin.  It’s no secret how much I love him.  He’s probably my favorite character on Gotham.  Seeing him crumble is probably going to be a mixture of emotions.  He has everything going for him right now, but how long will that last?  With Sofia coming in hot and Ra’s Al Ghul working with Barbara I have a feeling it isn’t going to be much longer.

Right now he gets to bask in the fact that The Riddler is no longer The Riddler.  It’s funny because Nygma seems angrier at himself than he is at Penguin.  Penguin is the reason this happened to him!  It’s so much fun to see them back on the same screen together.  I want things to go back to the way they were last season, but that unfortunately won’t ever happen.  For now I like how much they have become each other’s nemesis.  What will happen from here? How long will it take Nygma to regain his mind?  How long until Penguin’s reign is over? I can’t wait to find out!

For more Gotham stay with Three if By Space!

Comic-Con@Home has a slew of amazing panels and as always Warner Bros is at the forefront of those! These two panels are going to be re...

END_OF_DOCUMENT_TOKEN_TO_BE_REPLACED

Adapting Comics To The Screen: An Interview – SDCC

For more than 25 years, David S. Goyer's has delivered prolific and profound adaptations of comic-book characters and remains at the fo...

END_OF_DOCUMENT_TOKEN_TO_BE_REPLACED

Holy Smokes! Amongst the many exciting things happening at San Diego Comic Con this year, Batman Beyond turned 20! With this comes the...

END_OF_DOCUMENT_TOKEN_TO_BE_REPLACED

Batman Turns 80 This is an exciting year for the Bat himself and Batman fans alike! AT&T and DC are teaming up to bring an excitin...

END_OF_DOCUMENT_TOKEN_TO_BE_REPLACED

Burn It All Gotham has returned. The last season of my favorite show has begun and I genuinely do not know how to feel. I am excited, ...

END_OF_DOCUMENT_TOKEN_TO_BE_REPLACED

This year’s big crossover event is in full swing and it comes in three parts! The first two were featured as episodes of The Flash and ...

END_OF_DOCUMENT_TOKEN_TO_BE_REPLACED

Season Finale It has truly been one hell of a season.  Trying to go back and think of all of the major things that happened will take ...

END_OF_DOCUMENT_TOKEN_TO_BE_REPLACED

FOX Renews Gotham for Its Fifth and Final Season!

Gotham Renewed! After waiting with bated breath we have finally received news of Gotham's renewal!  There's a catch though, it appears...

END_OF_DOCUMENT_TOKEN_TO_BE_REPLACED

Wow, What A Reunion! They are really packing a lot into these episodes. "Reunion" was no different!  Every single minute has something...

END_OF_DOCUMENT_TOKEN_TO_BE_REPLACED

Welcome! To part 2 of my Mid-Season premier ranting and raving, if you haven't read part 1 do so here! I discuss Ivy and Bruce, Easte...

END_OF_DOCUMENT_TOKEN_TO_BE_REPLACED

Gotham season four is here and change is coming.  This is my recap and opinion of what has happened so far in season 4. To see our SDCC...