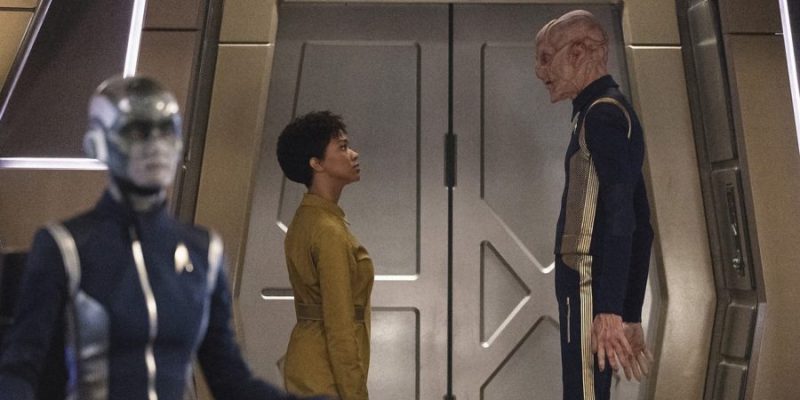 After staring each other down for a bit, the heavens erupted in battle as the Klingons and Federation delivered the opening salvo in a war that promises to be a major backdrop to the remainder season 1 of Star Trek: Discovery. Episode 102, “Battle at the Binary Stars,” picked up right where the first episode left off, but also offered us loss, sorrow and a bridge to what’s to come the rest of the way.

Episode 2 gives us more of the Klingon instigator T’Kuvma, who fancied himself a channel through which Kahless can reunite the fractured houses of the Klingon empire into one powerful force against the enemy he sees as its biggest threat — the Federation. The Beacon of Kahless was lit in episode 1, and we see that the great houses answered the call, though with a cynical tone towards T’Kuvma and his mission. The rumors are true, Klingons get pissy with each other. 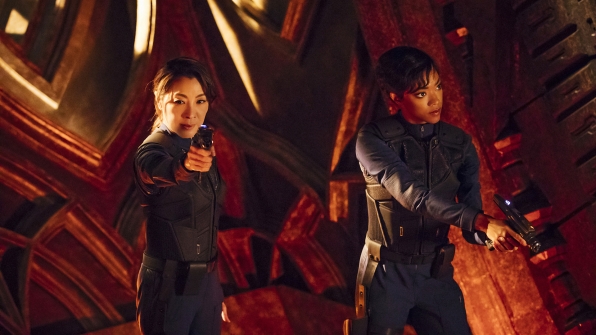 Fortunately for all of us, our itchy Klingon wasn’t so easily thrown off the trail to reconciling the Klingon houses by poor attitudes toward his leadership. He was a Klingon on a mission and through words that resonated with honor, duty and a common enemy, he gets episode 2 rolling nicely with the first phaser burst of what develops into an intense battle with the Federation. I’m a little disappointed that T’Kuvma didn’t make it out of the episode as he proved to be a charismatic Klingon with a clear purpose for his people.

If that purpose also presented him with opportunity, glory and the restoration of his house to a place of honor, so much the better. At least he went out in hand-to-hand combat with Michael Burnham and Captain Georgiou aboard his flagship. But I will miss him as a protagonist. However, his role was to get this party started and that’s exactly what he did — creating a situation that demanded the Klingons of each house band together toward a unified people. I did think it interesting that T’Kuvma was given some credit for creating the cloaking technology that we know and love. A nice little tidbit there with a comment from his albino Klingon second-in command.

So there you have it, a martyr for the Klingons who surely view the Federation as an enemy that is vulnerable. Goodbye T’Kuvma, you were a huge part of the first two episodes and you will be missed.

At this point, I see the first two episodes of Star Trek: Discovery as a smaller stairway to the big stage where the rest of the season will unfold. Episodes 1 and 2 introduced us to our main player (Burnham) and set the stage for what is coming next — war — and Burnham’s role aboard the Starship Discovery moving forward. That, my friends, is really what Star Trek: Discovery is going to be about moving through season 1. Two episodes as the appetizers, then the main sci-fi meal. 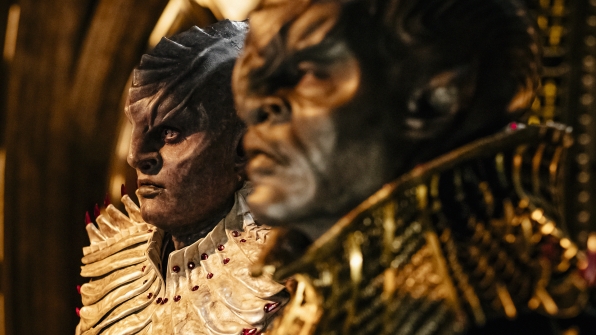 The Klingons lost a leader, but gained unity as they battled the Federation.

Unfortunately, to get there, the body count had to be pretty high as the Federation and Klingon losses were considerable. While I mourn the loss of the Klingon warlord, the additional loss of Captain Georgiou in the failed kidnapping attempt was a bitter blow. As an adoring fan of Michelle Yeoh, I was counting on her for more work this season, but that’s not to be.Luckily, we did get to see a little more backstory between Burnham and Georgiou, which makes what happened all the more painful.

Burnham and Georgiou’s relationship started haltingly, but with a measure of respect for each other’s record initially. We saw that this relationship had grown strong and close before events strained and eventually fractured it. And now it’s over. The Klingons and Federation are officially at war, Burnham has been court-martialed by the Federation, and the next chapter of this new Star Trek adventure is upon us — episode 3 takes us where we’ve always been meant to go. 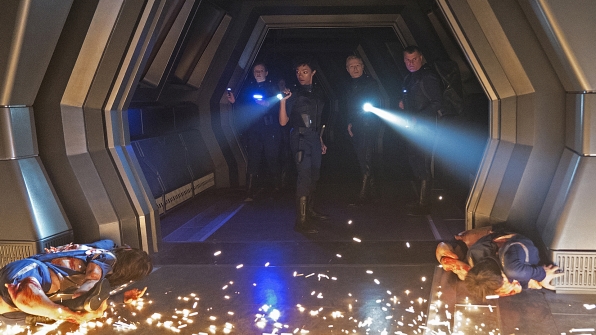 Boarding party aboard the USS Glenn.

At long last, Michael Burnham arrives on the USS Discovery and we meet Captain Lorca. Her arrival, though via prison barge, isn’t an accident and we spend episode 3, “Context is for Kings,” learning that the Discovery has more than a few tricks and secrets between her bulkheads.

Burnham has a lot of her shoulders. A human who was essentially raised Vulcan from a young age, she is the only human to have gone through the Vulcan Science Academy. From there, a first officer in Star Fleet, and now a court-martialed ex-officer destined for life on a prison barge or planet. Quite the series of events leading up to her landing on the Discovery, but certainly not the end of what can only be described as an interesting journey so far.

In truth, I thought episode 3 really allowed the show to kind of hit its stride. It was clear from the beginning that something was afoot on the Discovery. You could also tell the Burnham had her suspicions that all was not as it appeared. The “science” vessel offered tantalizing clues that there was more going on than simple research. Lorca’s own behavior (BTW, enjoyed the appearance of a Tribble and Lorca’s apparent addiction to fortune cookies) was one of studied observation. Just as Georgiou and Burnham surely sized each other up upon their initial encounters, we saw the same thing with Lorca and Burnham. Neither gave much away early on as they probed for answers. 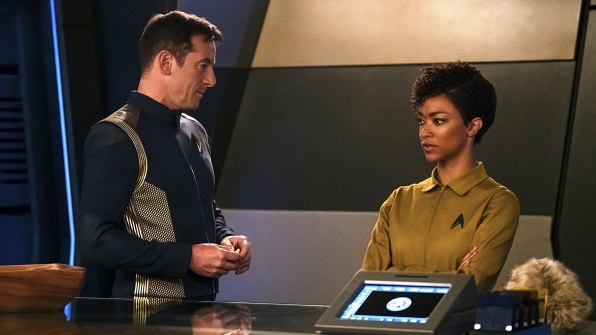 Captain Lorca and Michael Burnham discuss her joining the crew.

The hyper roommate, the natural hostility and curiosity of the crew (her rep preceded her), her strange assignment to the research area, the testy and snarky superior in the same area (Stamets has quite the attitude), and her breaking into the experimental wing for a little look-see were all well done and established her as someone who, despite her situation, remained alert, curious and dialed-in to the world around her. Michaell Burnham is an interesting character and I think Sonequa Martin-Green has done a marvelous job thus far in creating a character that’s layered and complex. We (and she) are where we needed to be to get this thing really rolling. Now let’s see what comes next.

Test Bay Alpha proved to be a fun place, didn’t it? While war is raging, it was nice to see the show also draw on its roots through the Mycellium Spores. Captain Lorca is clearly a man who sees past the war and into the future. The spores will create a new way of propulsion for Federation ships that, yes, will help them defeat the Klingons, but also open up possibilities to discover strange new worlds and civilizations. I thought it was a nice roundabout way to referencing TOS without it being cliche. It’s implied, rather than overtly said. “We’re not creating a new way to kill. We are creating a new way to fly. An organic propulsion system. Imagine the possibilities,” Lorca tells Burnham. 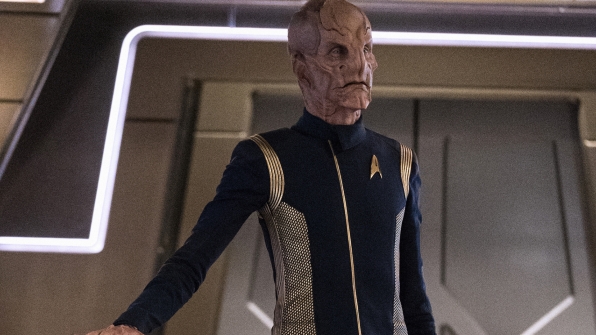 Doug Jones as Saru aboard the Discovery.

But there are still questions to answer. What was that thing that was on the USS Glenn, and later beamed to a lab aboard the Discovery? Does traveling via Mycellium Spores have a cost? And why would Lorca want it brought aboard the ship, and seem to be fairly comfortable being close to it? While part of the mystery of why Burnham has been targeted to join the Discovery crew was revealed, it’s fairly clear that there are still mysteries surrounding the ship and Lorca himself.

“Universal laws are for lackeys, context is for kings,” Lorca tells Burnham. What exactly does that mean moving forward? Despite our limited exposure to Captain Lorca thus far, it’s clear he sees a different picture of the universe taking shape. I’m delighted that Jason Isaacs has taken on this character because he imbues him with this wonderful mysteriousness that leaves you believing the sincerity of what he says, while wondering if he’s said all that could be said, or implied.

t would also appear that his head of security may have a little “thing” for him after letting him know she was would help him “with anything, anytime.” Perhaps Lorca has a little of the Captain Kirk pheromone working aboard the Discovery?

Still, a delightful character that already seems very interesting. I’ll be curious to see how Isaacs, the writers and showrunners flesh him out. Hopefully, that will start when episode 4 drops.