Have we gotten to the place where we need to be more than a little worried about mental state of Captain Lorca? Let’s face it, if Star Trek: Discovery has given us anything, it has given us another captain that’s more than a bit mysterious, just a little too closed off, and rife with intuition honed from multiple unnamed adventures. Lorca seems to be no different from others who’ve sat in the big chair, though in episode 6 of Star Trek: Discovery, “Lethe,” he appears to also be suffering from a nice bout of PTSD.

I suppose a short stint in a Klingon prison barge will do that to a person, even a tough-minded sort like our Captain Gabriel Lorca. But what we saw in “Lethe” was a Lorca that seemed to be on the verge of losing control — of everything. Lorca’s certainly an enigma wrapped in a riddle dipped in mystery, but what we saw in this episode left us a little in doubt about where he’s headed. Never mind the emotionless booty call with the visiting Admiral Cornwell to try and throw her off the trail. It appears clear that Lorca knows all is not right in his “mind palace.”

But I can’t help but think that underneath all the cool and calm demeanor of a man struggling with what happened to him, there’s still a clever manipulative plan being played out. His embrace of Michael and Ash Tylor, both of which kind of came out of the fringes, is an interesting development. What it all means is what leaves me with questions I’m hungry to have answered. Lorca, what’s your game, sir? 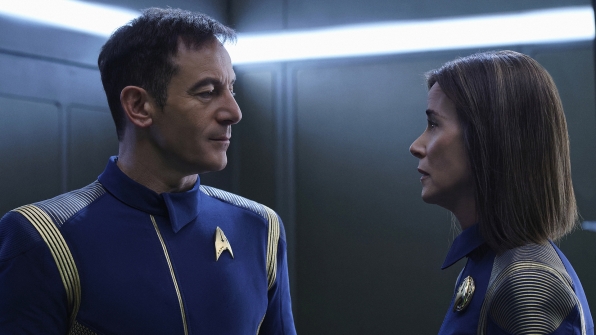 Obviously, Jason Isaacs is a tremendous acting talent who has brought an intensity to the role that I find refreshing. His portrayal of Captain Lorca has been very interesting thus far and I look forward to seeing what the end game is for him as a character.

Episode six gave us a fun peek into several story lines that are playing out. We saw extremism that landed Sarak in a potentially deadly situation. Michael Burnham continued to bond with her new pal, Tilly. She has taken the young cadet under her wing, which also helps push the process of her own healing further down the rails. Burnham and Sarak’s connection is tested in an interesting way, which ultimately saves Sarak’s life, but reveals a deep secret he’s been carrying, and the guilt that secret has left in Burnham’s soul.

To me, it’s interesting to see the Vulcan-Human dynamic at work. It always seems that no matter the length to which the Vulcans try to shield themselves from the impact of “humanness,” there always seems to be a few drops that spill over into their world. We got a chance to see the power of the Katra, or mind essence, in the episode. Sarak and Michael had experienced it before in the second episode, but in episode six we see it more fully explored and used in the saving of Sarak.

And within that rescue effort, Sarak and Michael come to terms with a development that impacted both while on Vulcan. There’s hurt, then understanding, and finally the glimmers of healing that the two will have in their own unique way. It was all so…human. 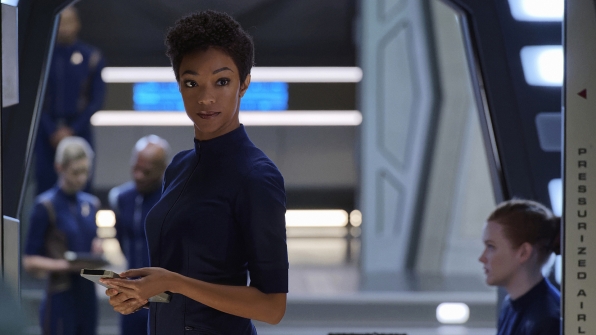 Sarak’s forced choice between Michael and Spock for the Vulcan position was interesting and revealing for long-time Star Trek lovers. I’ve enjoyed the way the show has gone about dialing in little snippets of backstory for the characters as we’ve moved along. It helps to kind of pull us into their world of thinking a little more and, while it may not be as comprehensive as we’d like, taken within the whole of the character moving forward, I’ve found it revealing.

Star Trek: Discovery has taken some blows for being too dark and lacking the humor of its predecessors, but “Lethe” offered some nice little moments of sparkle amidst the grittiness we’ve come to expect from this series. We got one right off when Tilly and Burnham were running the halls of the Discovery.

Burnham’s single-minded coaching was in stark contrast to the T-shirts the pair were wearing that simply read — “Disco.” Anyone who lived through the halcyon days of the disco era had to enjoy that little gem, knowing that shaking your booty in platform shoes, tight bell-bottom pants and skin-tight silk shirts on a lighted dance floor could hardly be considered inspiration for captain’s training. But it was a great moment. 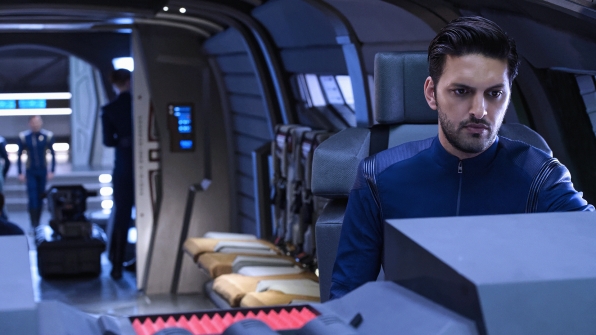 Another chuckle-inducer came courtesy of Lt. Stamets, who seemed to channel his inner ’60s love child when he dropped the word “groovy” on Captain Lorca and displayed some nuttiness in the aftermath of his spore-induced space travel from last episode. Considering how buttoned-up and joyously arrogant Stamets has been up to this point, watching him kind of cut loose and get funky was deliciously funny. While we pondered Tilly’s use of the “f-word” last week, perhaps more shocking was hearing “Groovy” escape Stamets’ mouth.

I’ve said it before, but it’s worth repeating – it’s not a bad thing Star Trek: Discovery is darker and grittier. It’s a new way forward in the Star Trek realm and an interesting way to tell the stories – and it makes those moments of humor, even subtle moments, that much more satisfying.

There is still much to be explored in Captain Lorca’s mind, as well as just who is this Ash Tylor guy and is he worthy of such a quick rise to security chief? Michael and Tilly are an interesting pair and their relationship should draw Tilly out into the mainstream a little more. And are we going to see Tylor make a play for Michael? That lunch room meeting seemed a little too cozy for my tastes. I’m not sure I trust Ash, but I’ll leave it to Lorca’s instincts at this point. 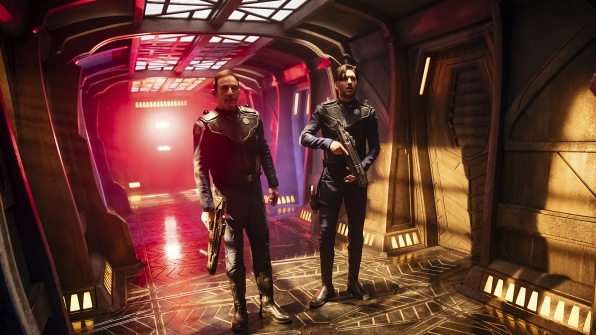 Captain Lorca and Ash Tyler get to know each other a little better during a training exercise.

I’d dive into the deceit and conniving of the Klingons in yet another kidnapping, but at this point I find them to be without much honor and extremely self-serving. Though I would say that we’ve discovered a few interesting tidbits about the Klingons so far. We’ve seen the beginnings of how the cloaking technology made its way through the empire, as well as what looks to be the formation of the Klingon Empire as a whole.

T’Kuvma’s vision, noble as it was, may still come to fruition, though in a very different form and with very different tenets leading it. However, I’m still working through the “Klingons as cannibals” storyline. That one threw me for a loop, to be honest. I’m hoping Admiral Cornwell isn’t going to be part of a future menu item. The Klingons are, at this point, deliciously interesting on many levels, so I’m “hungry” for more intel on The Federation’s foes.

With the announcement that Star Trek: Discovery has been picked up for a second season, the chance to really explore this strange new world is now a possibility. I think that with familiarity will come an appreciation for what the show offers, rather than a disdain for perceived shortcomings.