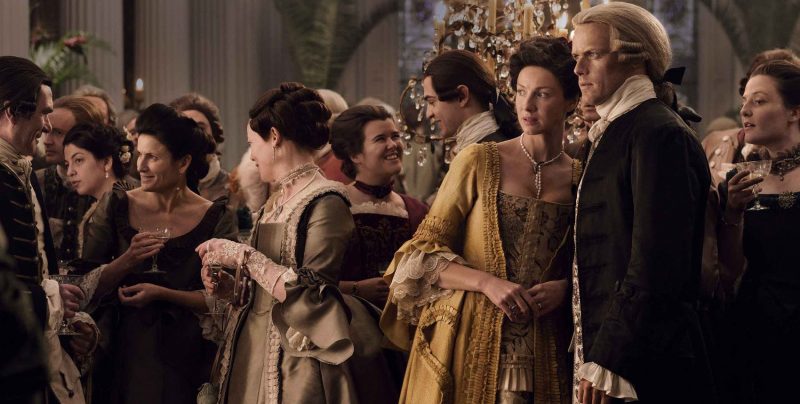 Outlander: Review – The Bakra Is One Strange Ride

We now have one episode left in Season 3, and if you’ve read Voyager, you know we have a lot of ground – or open ocean – to cover. There’s a great amount of speculation on how they’ll get everything in – and what they’ll change to get to the end. But first, we had a wild ride in the hunt for young Ian, with some returning characters, good and bad.

I had a major problem with this episode. All weekend, I’ve been feeling torn in two about it. Is it possible to have two conflicting opinions at the same time? That’s where I’ve been. On the one hand – if I hadn’t read Voyager, and didn’t know what was missing, or where we were going, I’d be inclined to be really happy with this episode. After all, who can quibble with a really interesting character – Geillis Duncan – returning and being out of her ever-lovin’, scheming, murderous mind? Blood baths, bad wigs, face-caressing feet and all? And all the highly-charged looks between the expected couples – Jamie and Claire – and the unexpected couples (and not-couples) – Lord John and Jamie? Mr. Willoughby and Margaret Campbell? Young Ian and the witch??? 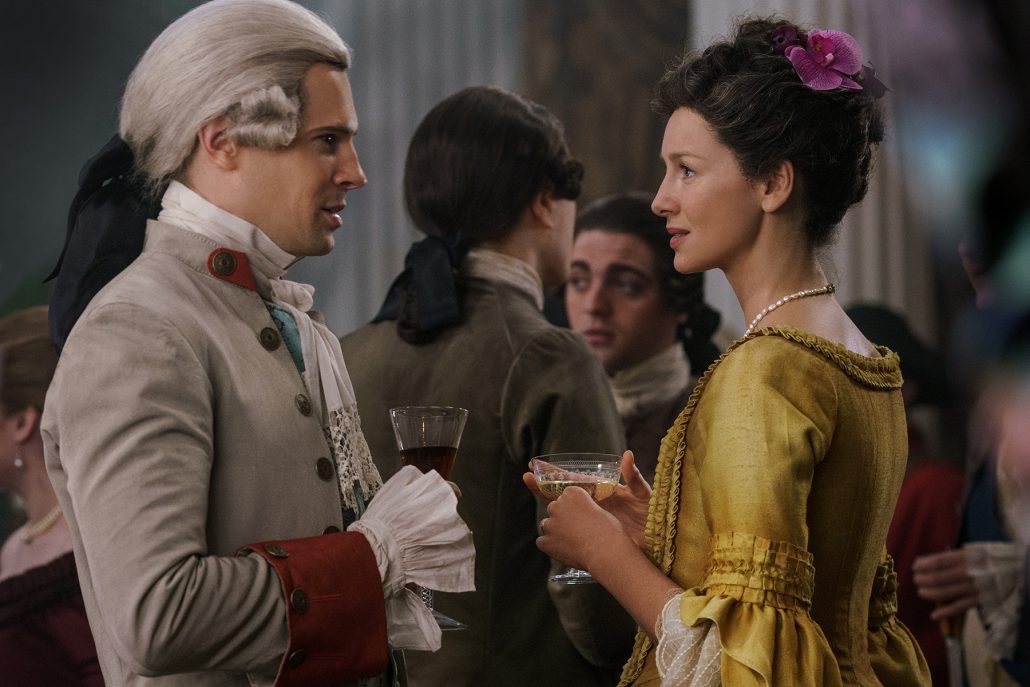 On the other hand… I HAVE read the book. And so have most of you. And even from that perspective, I was ok with bringing in the Brahan Seer’s prophecy at this point – yes, in the book series we don’t hear about it until much later, but SOMEONE had, and now we find out who. And we had never seen the encounter between Ian and Geillis, only heard his account of it later, and here it was, creepier than we could have imagined. You knew a confrontation between Jamie and Captain Leonard had to come, otherwise what was the point of setting all of it up? (And this was at least the 5th time that Jamie has been arrested throughout three seasons – it’s getting to be tiresome.)

However – this section of the book contained some beautiful lines, very romantic lines that possibly may reappear somewhere else, but I doubt it. And we lost Jamie telling Claire about Culloden, as he does periodically, and heart-wrenchingly, throughout the books.

Only you,” he said, so softly I could barely hear him. “To worship ye with my body, give ye all the service of my hands. To give ye my name, and all my heart and soul with it. Only you. Because ye will not let me lie – and yet ye love me.

And as much as I appreciated the supercharged look between Jamie and Claire as they stood in line to meet the Governor – you can’t always control when those impulses will rage through you – I might have appreciated it more had it been between them in the privacy of their rooms, as they got ready for the ball, as Jamie put on his wig, powdered his face, applied his beauty mark and donned his red Moroccan heels – oops, he didn’t do all of that, did he? The wig was supposed to be part of his disguise from Captain Leonard, and I wanted to see a beauty mark! But the sight of Jamie in a wig at least was interesting. It made his lovely cheekbones stand out, didn’t it! 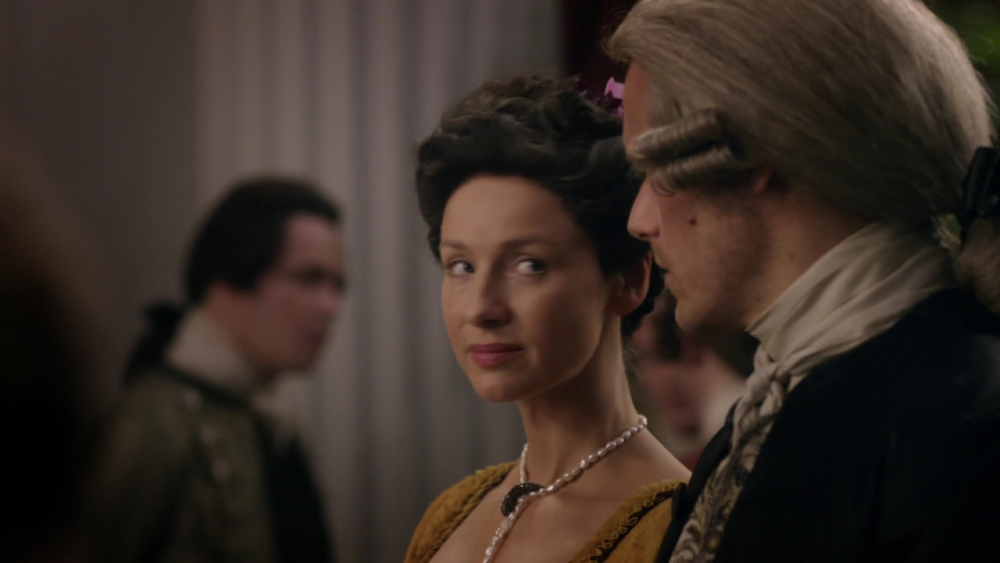 I’m still going to mourn the things I didn’t get, but on balance, it was a strange but well-done episode. Let’s take a short look at some of the moments.

Snakes run through this show (so do rabbits, but they’re much more pleasant). We had our first REAL snake last week, but this time we had a serpent of the Garden of Eden variety, tempting a naive and very frightened young man. Oh, did she slither out of that purportedly goat’s-blood bath! (As Diana said on her Facebook page, “Ah, but was it?”, which makes it creepy to the nth power.) We already knew that she had no hesitation when it came to getting rid of inconveniences, like husbands. But she’s now taken that murderous inclination, and an unhealthy interest in sex, to wild heights. “Virgins have such power in them,” she tells young Ian. 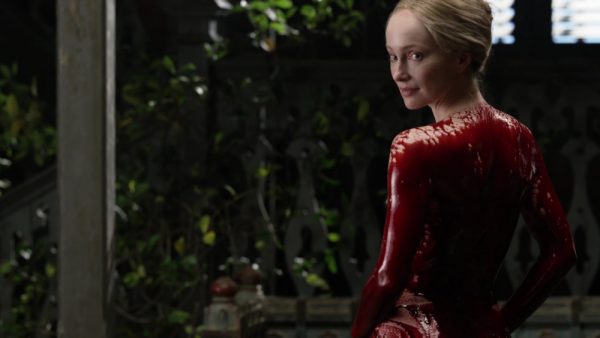 First, though, she needs to find out what happened to her third sapphire. This was one of my favorite moments, when Ian lets slip, aided by the witch doctor’s truth-telling tea, that it might have been his uncle who took the gem. And then he claps his hand to his mouth, to keep any other revelations from falling right out! Poor Ian, sitting there on that huge bed in that creepy room, looking so much like a child! Of course, how is he supposed to react, at his age and hormone level, when a beautiful woman seductively rises from a blood bath in front of him? 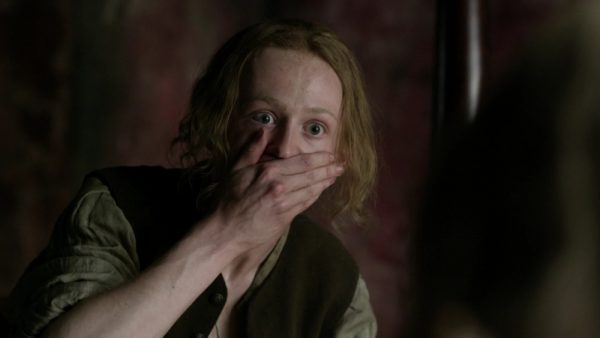 He was, naturally, both horrified and lust-filled – as Geillis sits next to him, drawing her leg across his lap, he leans closer to her, as a lover might lean in for a kiss, unable to control himself. Yes, the footsie was gross, but also fascinating (Lotte has dancer’s feet, doesn’t she). John Bell was terrific in this scene, and in the few other minutes we saw him – defiantly fighting back, learning about the six other boys from the dungeon…I’m excited to see him grow in this role. But first he has to be rescued. 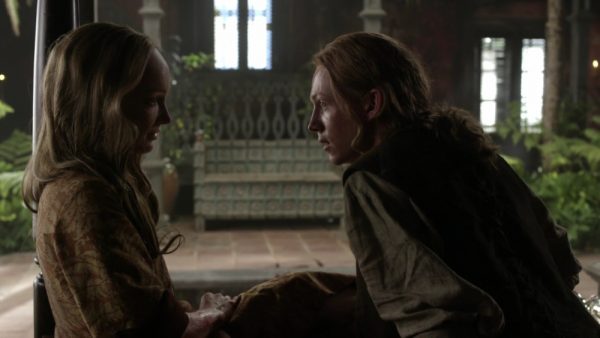 SPOILER IF YOU HAVEN’T READ ALL THE BOOKS – In future books of the Outlander series, Frank leaves information for Brianna warning her that she could be in danger. He’s not sure who she should be concerned about, but believes there is reason for concern. I don’t remember the exact details, but this does come into play. And it makes sense that Geillis, who came through the stones to try to change history and make sure that Prince Charles would be successful, would still want to find a way to ensure that a Scot became king. Frank references “the Brahan Seer,”  who may or may not have been genuine (for more info, click here). But the show has changed all this quite a bit, with little bits and pieces sprinkled through previous episodes, all drawn together in this one.

I am left a little confused, though – Geillis obviously knew that there was some kind of legend about the power of these three stones coming together and giving a true seer a prophecy about a king from Scotland? “We have to get this in somehow, why would she want the treasure box, how can we use these Campbell people, and yeah, there’s something about a dangerous prophecy later in the books…” But if you get over the hump of “this is what creates the possibility of a prophecy,” the little bits and pieces planted in earlier episodes came together well. 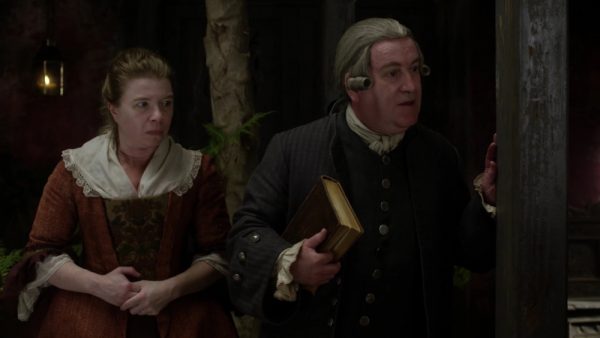 Geillis spots the third sapphire dangling from Lord John’s belt, and has to come up with a way to get it into Margaret’s hand, for just a minute. I loved John’s reluctance to join in, his dancing around her push to get him over to the fortune-telling table. He’s already developed an opinion about Geillis, telling Jamie and Claire, “She’s a touch strange, isn’t she?” Yes, John, if only you knew! But he reluctantly agrees. Margaret was very compelling here! Archie may be a crud, but there was no doubting that Margaret is not supposed to be a hustler – she’s the real deal.

When twice 1200 moons have crossed ‘tween man’s attack and woman’s curse, and when the issue is cut down, then will a Scotsman wear a crown. 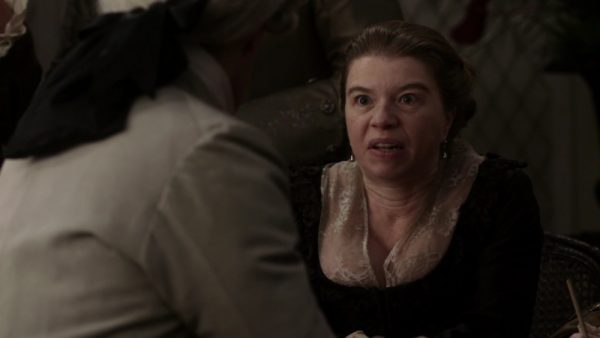 Besides “bizarre,” what could John have thought of this? It certainly wasn’t HIS fortune she was telling. So “twice 1200 moons” is 200 years, Archie interprets, and the conclusion is that a child who is 200 years when it is born must be killed – cut down. Who do we know who is 200 years old, sort of, when born? Geillis and Claire have a chance to chat, and Claire confirms that yes, she too is a time traveler, but hasn’t yet told Geillis that she has children. But in the scene where Jamie is taken prisoner by Captain Leonard, he makes a point of giving Claire the “childrens’ portraits,” which have to include Bree’s photos – what could Geillis learn if she gets her hands on those, hmmmm?

So all these little bits and pieces – Margaret’s “gifts,” as Geillis says, the sapphire Jamie gives over to John, the photos, Geillis’ obsession with the kings of Scotland – all are coming together. I’m excited to see how this all plays out in the finale, and beyond.

So what WAS that look between Jamie and John, and the confused/weirded-out look that it creates in Claire? Obviously, we know what it is on John’s end – as he told Jamie at Helwater, “I shall want you til the day I die,” and we know Jamie doesn’t return John’s feelings, but the possibility of Willie being with him… that would have been impossible for Jamie to resist, and dangerous for him to give into. 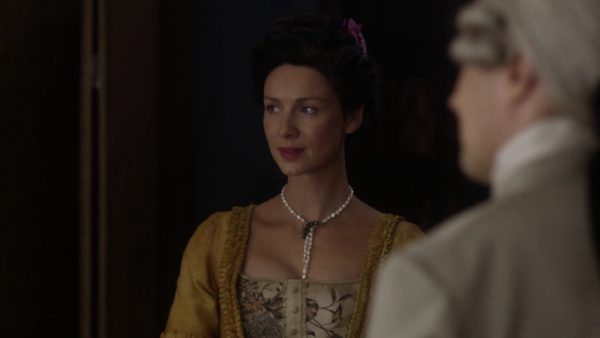 But Claire? A clue from the book, that we don’t get in the show, is in a discussion she has with him about Ardsmuir. “He was the governor of Ardsmuir prison, he had said casually. And less casually, on another occasion, D’ye ken what men in prison do? I did know, but I would have sworn on Brianna’s head that Jamie didn’t; hadn’t, couldn’t, under any circumstances whatever. At least I would have sworn that before tonight.” Does show Claire have absolute confidence that Jamie didn’t, hadn’t, couldn’t?

Yo Tien Cho and Margaret Campbell – that was unexpected. This Show Willoughby is so different from Book Willoughby that I can’t predict at all where they may go with this, but the moment in the garden was lovely. Margaret, who can’t control her fortune-telling when she is touched, seems startled by the stillness she feels – the normalcy – when she takes his hand. And he has a momentarily startle, feeling something in her with that touch. A small thing, or is it? We’ll know next week. 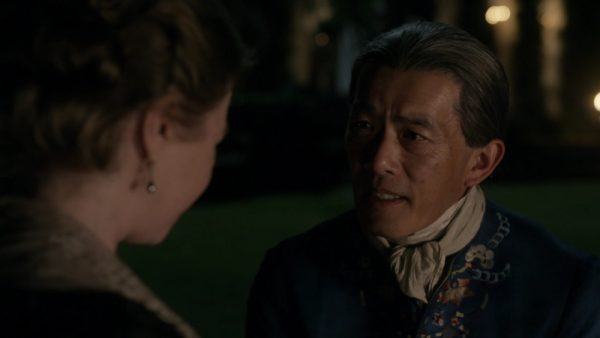 Yo Tien Cho’s embroidered suit was spectacular, and Terry Dresbach noted it on Twitter:

My fave costume of the season (other than that damned suit) pic.twitter.com/PrK5sLkQkI

A preview of the finale!

Sidenote: One of my friends, Rebecca Johns Trissler, noted that she thought Geillis slithering out of the bloodbath was a nod to a historical figure, Elizabeth Bathory, also known as “The Blood Princess.” To learn more about Bathory, click here. And Rebecca’s first book, The Countess: A Novel of Elizabeth Bathory, is about this fascinating woman. It’s available on Amazon – click the cover photo to learn more.

Thank you to Outlander-Online.com for the use of their screencaps!