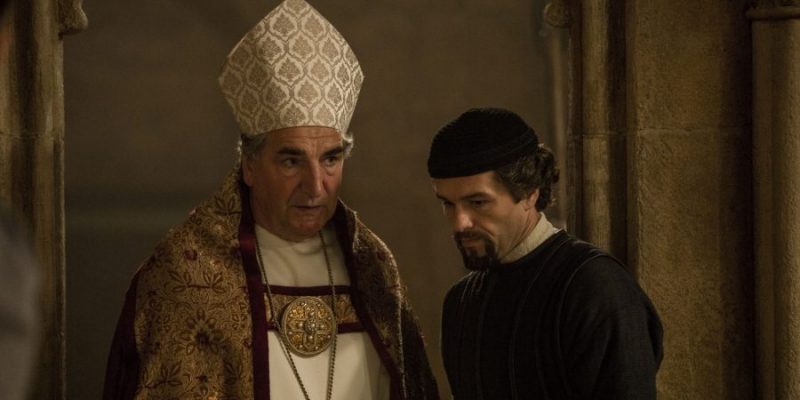 Well, episode 105 of Knightfall treated us to a full buffet of the machinations, calculations and manipulations that are William De Nogaret. While there was plenty going on in “Hard Blows Will Banish The Sin,” make no mistake about this hard truth – this episode revolved around the brilliance that is our scheming counselor to King Philip. And it was marvelous. Honestly, De Nogaret was in rare form in this episode, demonstrating not only his powers of manipulation, but to what lengths he’ll go to accomplish the plans he’s concocted.

As you recall, Princess Isabella was humiliated to have to undergo a purity test after allegations of her virtue being compromised were raised. Her potential mother-in-law, the queen of Catalonia, dropped the word “strumpet” on our lovely princess and forced the issue. That indignity, and Isabella’s insistence that Prince Lluis betrayed her by whispering of their one-night of passion set her on a course that was positively De Nogaret in its focus. Of course, it was De Nogaret’s peeping-Tom compulsion that really was the igniter for all this in the first place.

Deciding the imagined betrayal at Lluis’ hands was too terrible to ignore, Isabella sought the aid of “Uncle William” to stop the marriage, and as it turned out, deliver a little retribution in the process. While De Nogaret initially balked at the possibility, it wasn’t hard to notice the Isabella has a little bit of the manipulator in her heart as well. It’s obvious she intuitively knows De Nogaret has more than a little affection for her and used her womanly wiles to bring him into the fold. 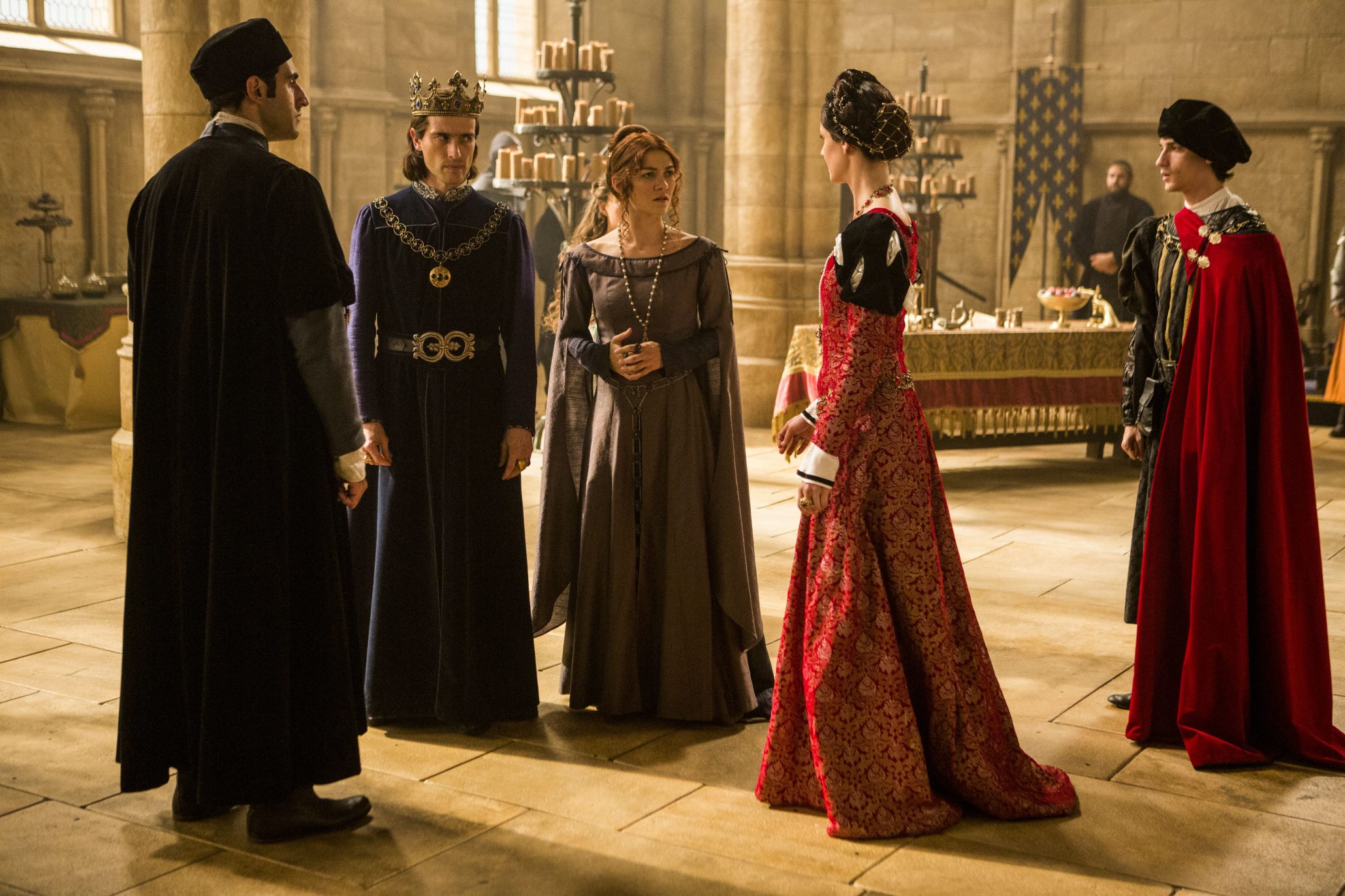 The royal court of King Philip of France is also a place of intrigue.

And what a fold, eh? Talk about a plan that was both brilliant, audacious, vicious and more than a little complex. Wow, was that something else. And as it turns out, our young Isabella has more than a little of that De Nogaret ruthlessness in her emotional makeup, too. I’ve watched this episode five times simply to revel in the joy of seeing the pair’s plan come to fruition, ending with the fiery death of Lluis and the ultimate revival of De Nogaret from a self-inflicted poisoning.

You have to admire the conviction of this character, and the ability he has to see the whole board, as it were. He was able to, with Isabella’s complicity, end the marriage, get rid of the troublesome young Lluis, end the alliance with Catalonia, and draw England back into the discussion — while helping the young woman that obviously has his heart on the path he prefers. William De Nogaret, I salute you, sir. You poisoned yourself to set the wheels in motion that introduced us to your ninja-like accomplice Altani, the idea of Greek fire, the kidnapping and eventual death of a hated rival, and then pinning it all on the Earl of Oxford with a nice little bow.

I certainly appreciate a villain willing to engage in a little monologue to fill us in on the plan as a whole, and particularly enjoyed watching the Earl of Oxford slowly come to the realization that he’d not only been played like harp, but was going to be cast as the villain when his corpse was eventually found. Brilliant!

Yes, episode 105 was all about the abilities, assets and lengths that De Nogaret is capable of bringing to bare to make something happen. He risked his life to set a game in motion that had plenty of moving parts — enough that it could have gone sideways at any number of junctures. But he’s nothing if not committed and detailed and this episode provided us our deepest look yet into what makes De Nogaret such a formidable opponent. I mean, the man poisoned himself. Talk about commitment to your part.

I thought it was telling at the end, as the Catalonian prince’s charred remains were finally sent on their way that Pope Boniface, whose mind works similarly to De Nogaret’s, siddled up to him on the steps and noted that everything he’d wanted to have happen had, indeed, happened. It was a point well made and a reminder that the Pope misses very little that goes on around him. However, in true De Nogaret fashion, he offered a little quip of his own about the Holy Grail as he walked away. Point and counter-point. 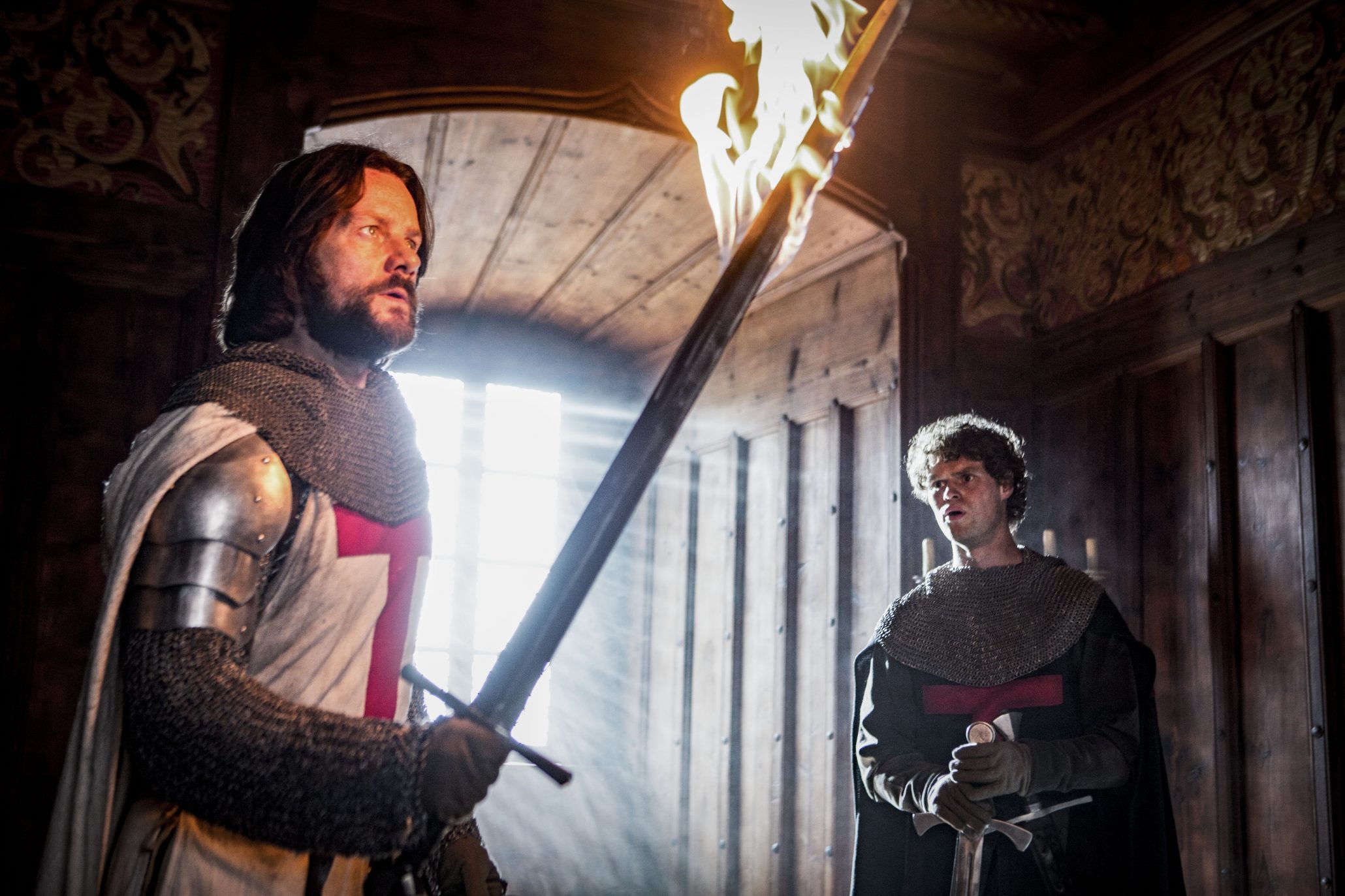 Gawain and Parsifal discover Greek fire will play a part in what’s to come.

The episode was so well written around De Nogaret and a complex plot that had far deeper ramifications than simply freeing Princess Isabella from marrying a man she thought betrayed her. And that’s what’s so interesting about this character — he’s creating this wonderful tapestry that includes so much of what’s going on around him. You can see him taking pieces of information and rather than discard them if they don’t fit into the tapestry, he lays them to the side for later examination.

Some bits and pieces fit right into the work immediately, while others are there to be pieced into the design later, as needed. You can see his mind working the tapestry as new tidbits come across his eyes or ears. This character is such an interesting one on many levels, but I truly enjoy the way he processes information. Very little is dismissed out of hand, but analyzed for its value, potential usefulness or as an oddity to be noted. The show as a whole is well-written and inviting, but the writers who delivered this story arc for De Nogaret really hit the sweet spot. I found it all very interesting and entertaining.

But that wasn’t all that was going on, right? The title of the episode, “Hard Blows Will Banish The Sin,” brought us to the travails of Tancrede, who admitted to killing the Saracen under care at the Templar temple. And for that, we see a punishment deemed “The Gauntlet” that Tancrede, who will not repent for violating temple policy, is forced to endure.

To me, it’s always an interesting exercise to watch religion use physical abuse and torture to try and cleanse men’s souls. While Landry is racked by guilt (no doubt for his own hypocrisy), he orders Tancrede to walk the gauntlet while being beaten by fellow Templars (forcing him to carry and wooden cross while enduring the beating was a nice touch). 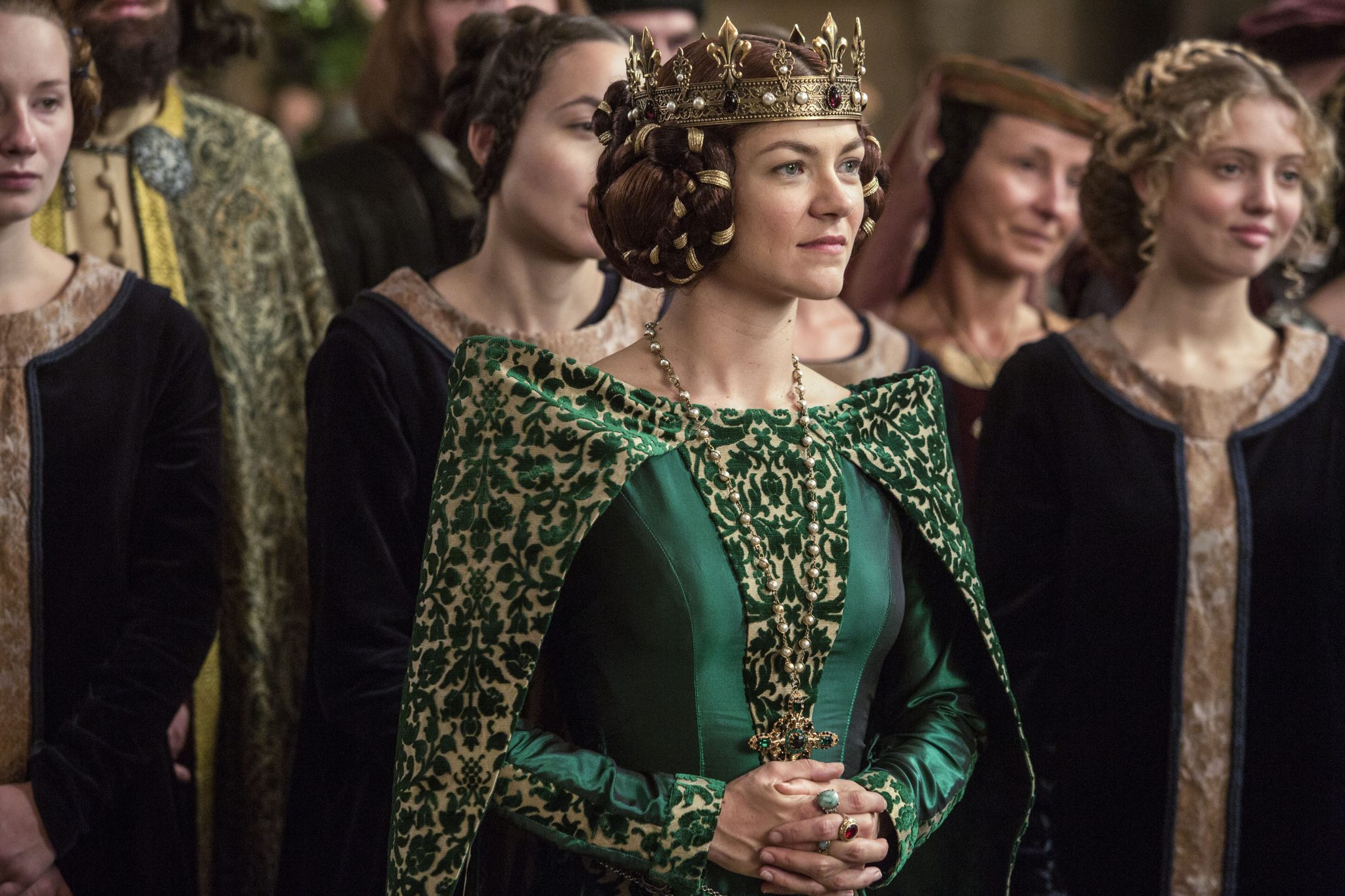 Queen Joan awaits the wedding of her daughter.

While Gawain continues to wrestle with his inner demons and jealousy of Landry, Tancrede is a character I’m more and more developing a fondness for. There’s something with this character that I find myself admiring and thinking that Landry should heed his counsel more often. It was interesting to me that he took the Saracen’s warning about the Grail to heart so passionately — passionately enough to slit the man’s throat, it turned out.

Simon Merrells does a wonderful turn as Tancrede, a Templar who follows his convictions even at the risk of great personal pain and anguish. Tancrede was a character that was a little in the background early on, but he’s become more and more of an important component in the Knightfall scheme of things and I think that’s valuable, particularly as we continue to wonder about Gawain.

Will he repent in the end? Who knows, but I hold out hope that his honor will be a beacon the Paris temple will rally around later. But, for now, it’s the dungeons, sir.

Does it strike you as highly probable that Gawain is going to go off the rails at some point? Potentially become an opponent that Landry will have to deal with at a later date? I don’t know, it just seems that there are issues with this character that are too deep-rooted and painful to simply be passed over or resolved by the Templar oaths. I think his demotion at the hands of Landry was kind of that last push that may lead him down a different path when it’s all said and done. 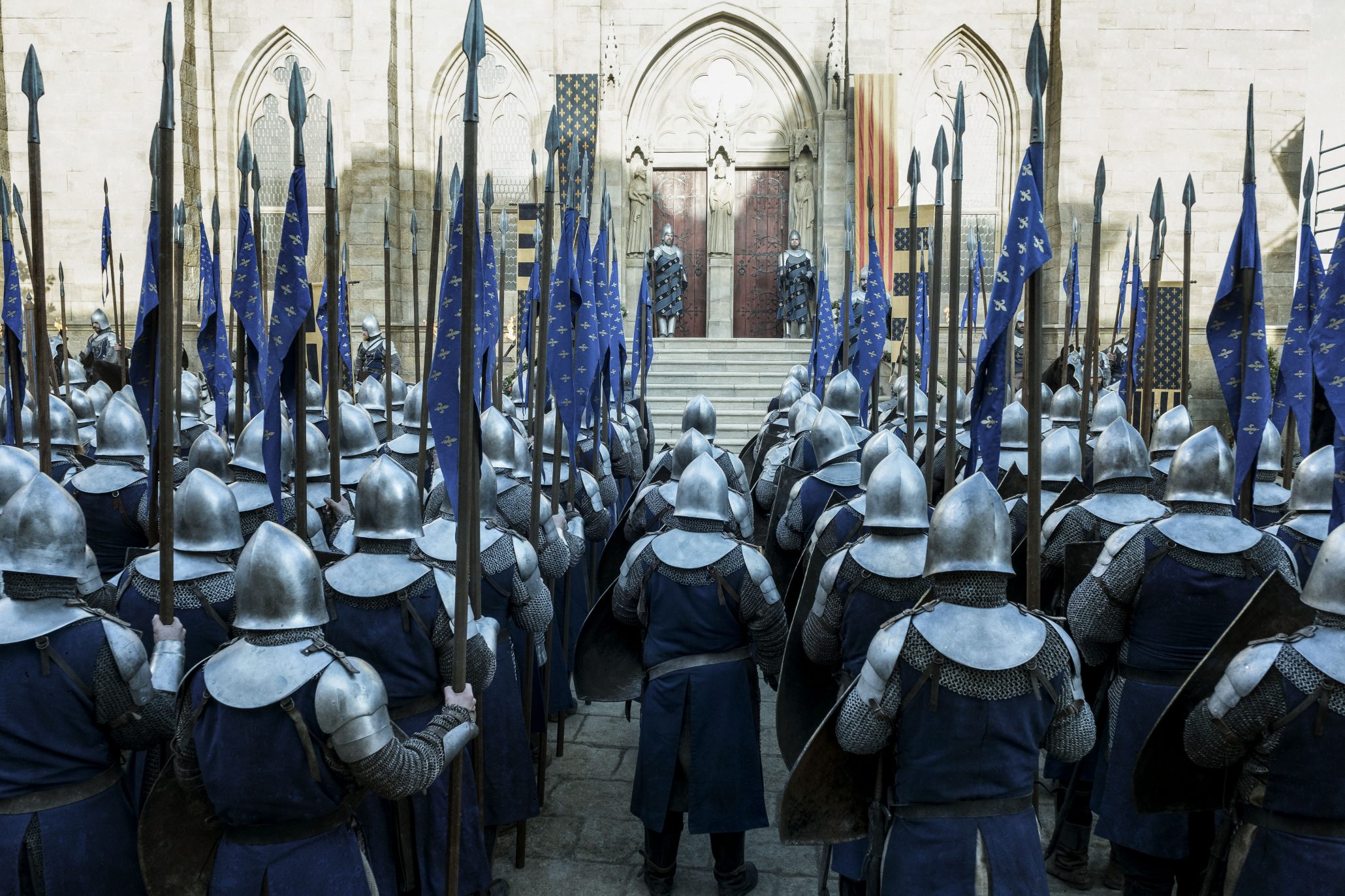 French soldiers assemble for their king.

And all of this is happening as the quest for the Holy Grail moves haltingly along. Landry has learned about the Brotherhood of Light and dangles an orange outside the temple gates to try and arrange a meeting with its members. The grail search has ground to a bit of a halt and it will be interesting to see if the Brotherhood will even meet with Landry and if they have the next bit of a clue that will send the search in a new direction.

The grail search has turned into a bit of a “Lucy pulling the football away as Charlie Brown tries to kick it” scenario at this point. Clues point them closer only to see forward movement interrupted by a step or two backwards.

And who is involved the hunt for the Grail at this point? The Templars, the Brotherhood, the Pope, De Nogaret and any other assortment of folks we may not even know about yet. We still have Parsifal making the questionable decisions of an impetuous youth, which at some point is going to likely get him killed, I’d wager. He’s far too reckless and his pain at the loss of his love seems to cloud his reason too often.

And while he continues to try to find his place in this new world he’s landed in, I can’t help but think his troubles are minor compared to what feels like an inevitable showdown with King Philip and Queen Joan.