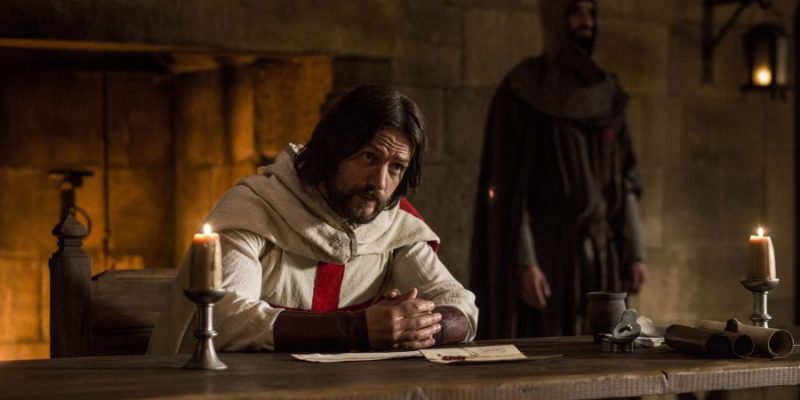 Through five episodes of Knightfall, we’ve watched the growing emotional agony of Temple Master Landry as he comes face-to-face with his own angst and hypocrisy. In episode 6, “The Pilgrimage of Chains,” Landry adds physical and psychological agony to the mix as he finally gets to “talk” with the Brotherhood of Light.

And in that moment when it looks like our main character might be facing oblivion, he strikes a deal with the Brotherhood that could lead him to the Grail at last. Well, he got another clue that likely will lead to another clue in what is becoming a frustrating Grail hunt for our main knight and his fellow Templars. My guess is that “the place you met Godfrey” isn’t going to be the final destination in the Grail hunt.

Rashid’s words were a little vague when he said “You will find what you are looking for.” Methinks there is more hunting and investigating in Landry’s near future, as well as future twists and turns.

I have to admit, I didn’t think the “talk” with the Brotherhood was going to boil down to a full-on torture session for Landry. Fire, water, hanging and then a fun bit of trickeration left me wondering if Landry had anything more to give — and just what the Brotherhood was willing to take. In the end, though, clues were revealed and the hunt continues, but only after Tancrede, who had been banished from the Temple, demonstrated a sense of honor and duty that Landry would do well to learn from. 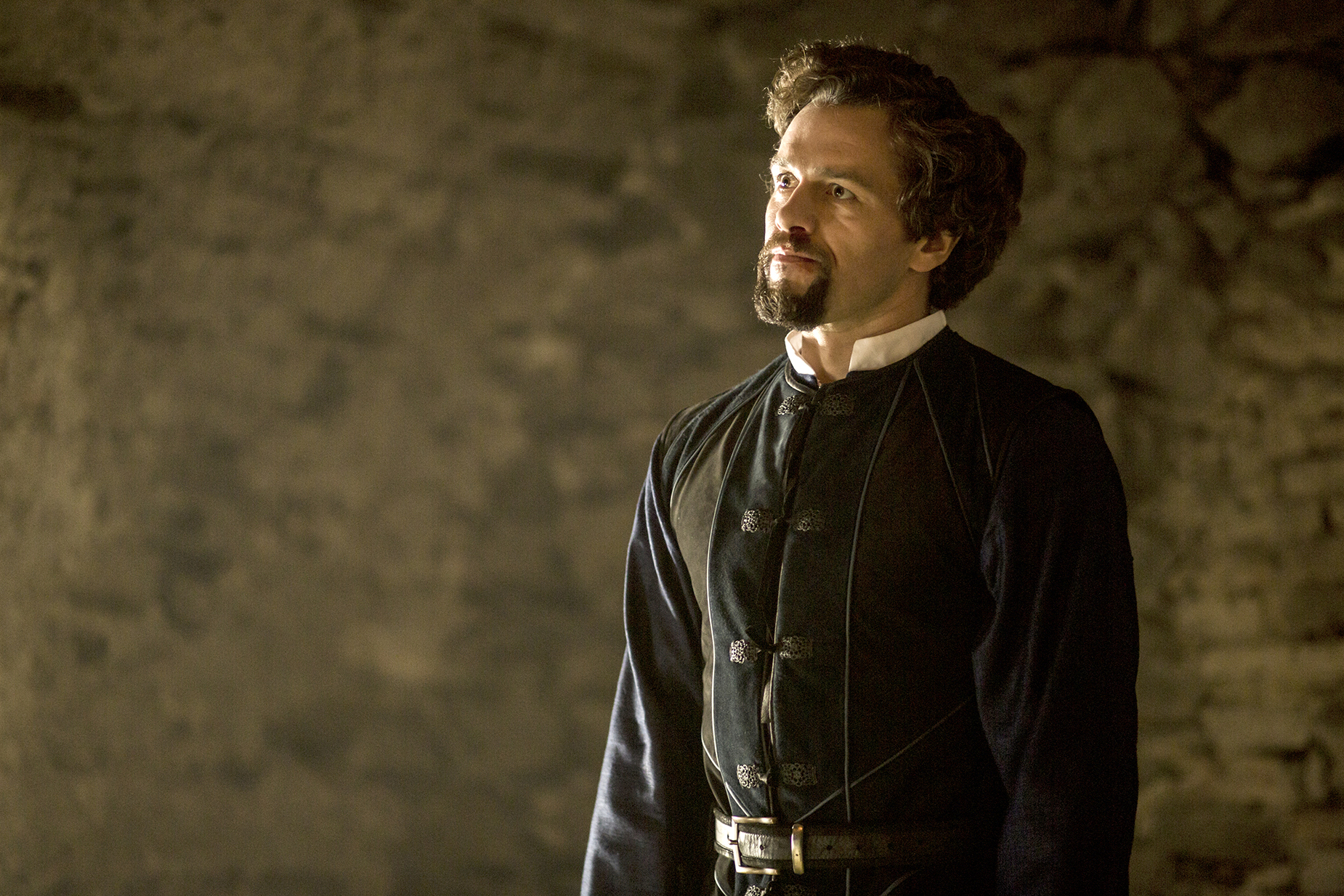 William De Nogaret experienced the highs and lows of his station in episode 6.

I don’t know what Tancrede’s fate will be now that he willingly put himself into the Brotherhood’s hands (remember, he slit the throat of Rashid’s son), but his sacrifice was the one needed for Landry and the Templars to take the next step in the Grail search. I do hope that we’ll get some backstory on how the Grail was rescued from the bay outside Acre 15 years before.

But I suppose for storytelling purposes, it’s enough to know that the Grail is available and that Godfrey apparently had quite the labyrinth of plans surrounding it. What will Landry find once he returns to the place he and Godfrey met? Well, that should be very interesting, shouldn’t it? I mean, the Grail isn’t going to just be sitting out there for him, right?

Who would have thought, as episode six got rolling, that a wisp of wind blowing some spilled quills would lead to the demise of our puppet-master De Nogaret? When King Philip announced that he was going to Knight William for his “saving” of the royal court from the Earl of Oxford’s “plot,” I surmised that we were going to see the schemer continue his role without trouble, now wielding more power than ever. But alas, De Nogaret was undone by those hidden tunnels he so adroitly used to spy on those in the court, including the lovely Isabella.

Initially, when she told him to meet her in his office after his knighting, I thought there was going to be some naughtiness going on. I think De Nogaret thought that was a possibility as well judging by the look on his face (talk about hopeful anticipation). But we’ll never know, will we. Isabella spilled the feathery quills to the ground, felt the wind coming from the secret entrance to the passageway, and went on a walkabout that she initially seemed to find exciting before finding the hole that peered into her room. 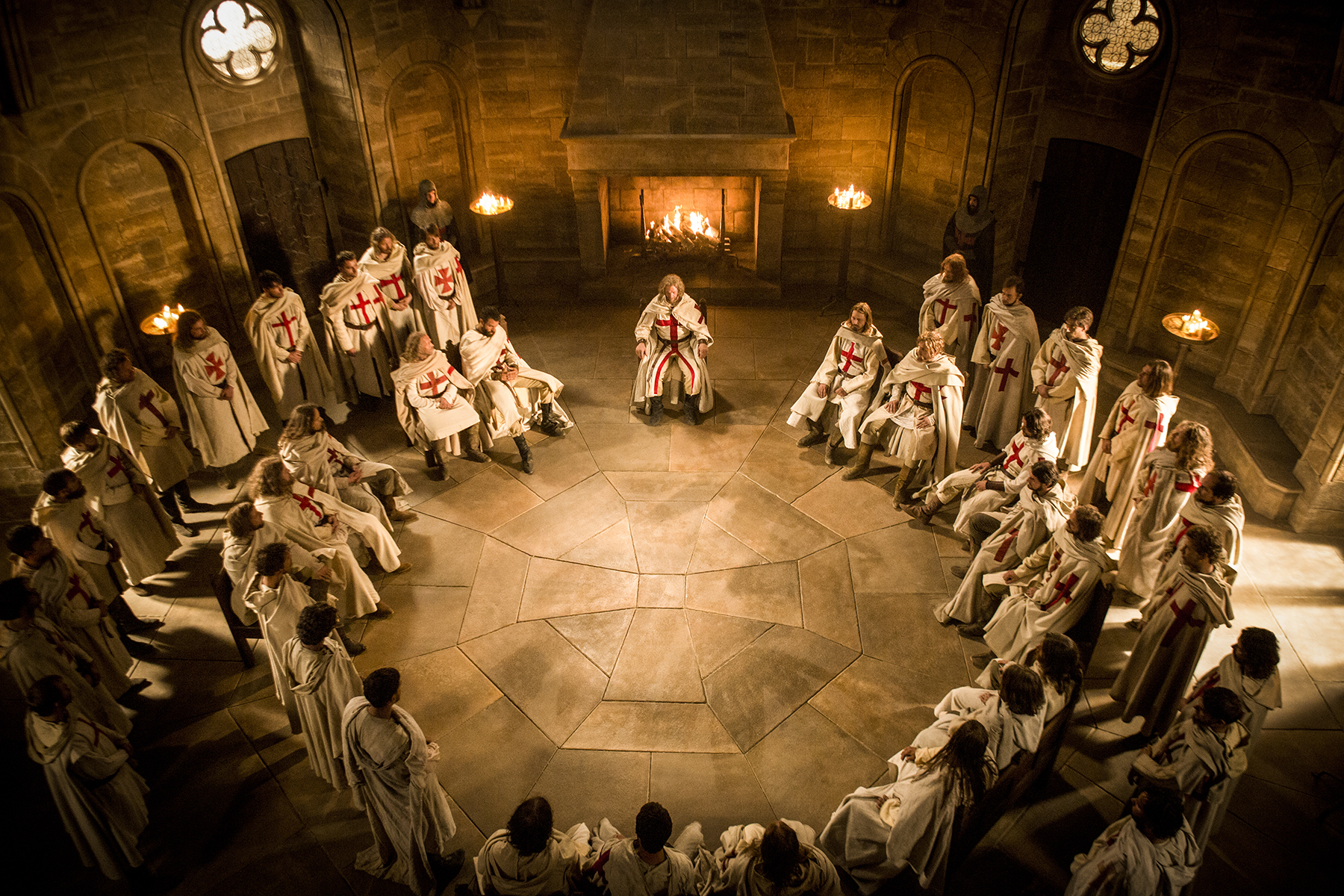 Templars at the Paris Temple gather.

As she put two-and-two together, piecing the puzzle together of how her youthful indescretion with the Catalonian prince truly got out, the De Nogaret high was about to become the De Nogaret low. I really thought our counselor, now outed and petulantly popping off to the king, was going to be hanged. In truth, I feared we were losing a valuable member of the Knightfall crew when they put that noose around his neck. I enjoyed the flashback of our first encounter of Malreaux and then finding out he was De Nogaret’s uncle — wonderful bit of twist there. And, fortunately, he was there when De Nogaret was about to get his neck stretched to save his nephew and whisk him away.

So De Nogaret lives. No doubt we have not seen the last of him, particularly given he’s trying to raise and fund an army to take on the Templars and destroy them (as well as snag the Grail for himself). Given his propensity for survival, as well as his obvious cunning and opportunism, it feels like he may be even more dangerous on the loose than in the court of the king. In truth, I’m delighted he didn’t die. My devotion to the machinations of De Nogaret are well-documented.

I think this development, in addition to humbling the young Isabella (You should have believed Lluis, my dear), opens up a bunch of fun possibilities for our scheming ex-counselor. My guess is there’s a showdown coming with the Templars and with the Grail. De Nogaret will not go quietly into this good night, my friends.

At this point, it’s important to note the work of Sarah-Sofia Boussnina as Adelina, who demonstrated not only devotion and cunning, but a toughness both physically and mentally in tracking down and eventually subduing the mysterious Roland at last. She took a beating to help Parsifal and the Templars, something that marked her as a young woman of character and strength. I’m hoping Parsifal took note and will seek to subjugate his rage and accept the Templar way. 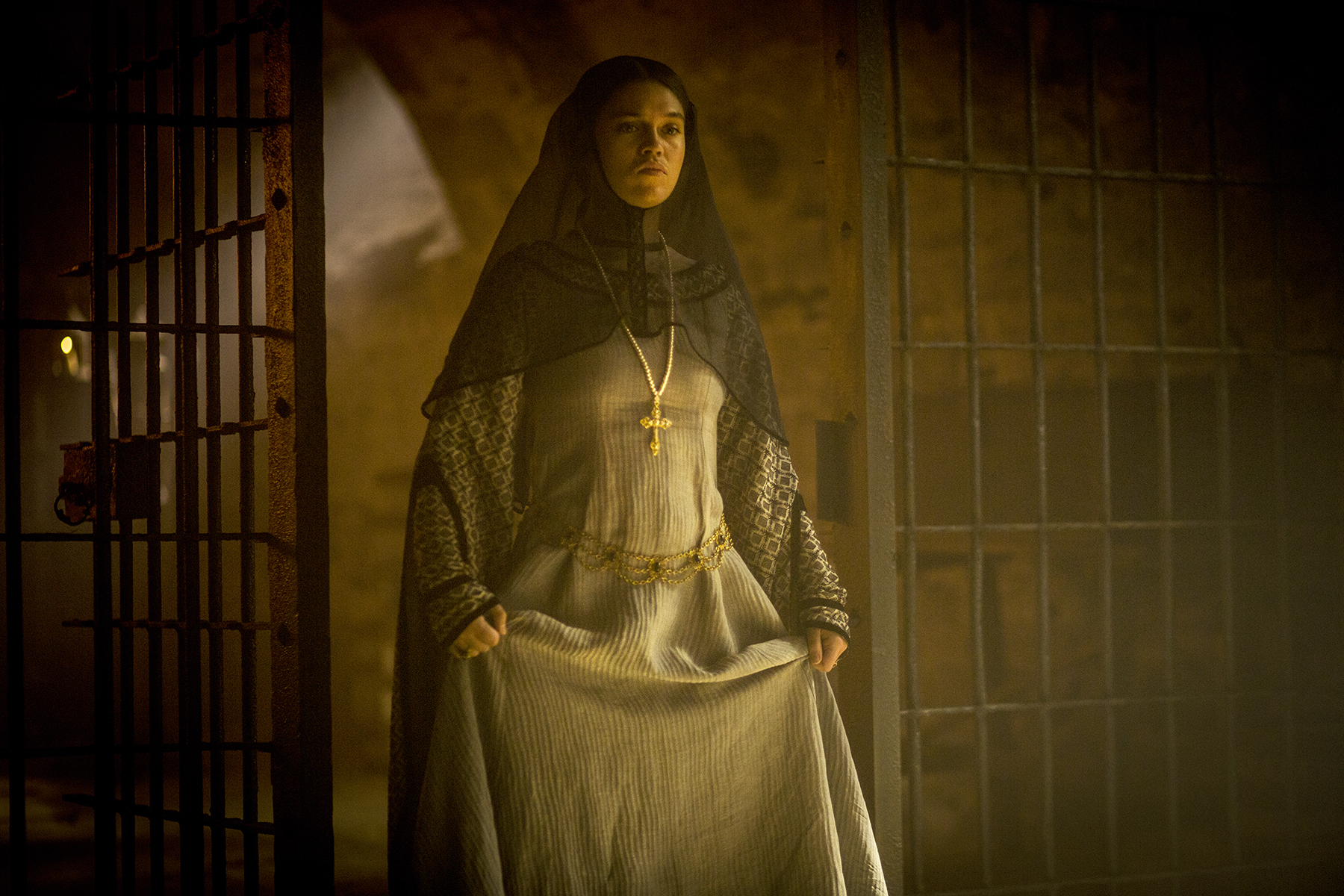 Isabella visits De Nogaret in the dungeon to wish him “well” as he hangs.

However, after watching him stare daggers at Roland as he came rolling into the temple grounds in the cage, I’m thinking that Parsifal is very likely to do something dumb and ill-advised. No offense to the young lad, but he seems to carry that kind of mentality at this point, doesn’t he?

Now, the question will be whether that impulsiveness results in a positive outcome or delivers something entirely negative. So, look for the Roland-Parsifal dance to take on new music as we move forward. Something’s brewing there.

So, we still need to figure out what “IV” means and how it relates to the Grail search by an as-yet unknown entity. And where will Pope Boniface figure into all this. It’s clear his motives are less gentle than that of the Templars and Brotherhood of Light. Remember, Boniface wants to use the Grail as a rallying cry to raise an army to take back the Holy Land.

The feeling here is his hands are far less clean in all this than it might appear. As we head to the homestretch of the Grail search, it would seem that some of these things are going to collide, which should make the final few episodes more than a little dramatic and eye opening. Plot twists and turns, we await thee. At this point, it’s hard to see Knightfall as anything other than a rousing success.