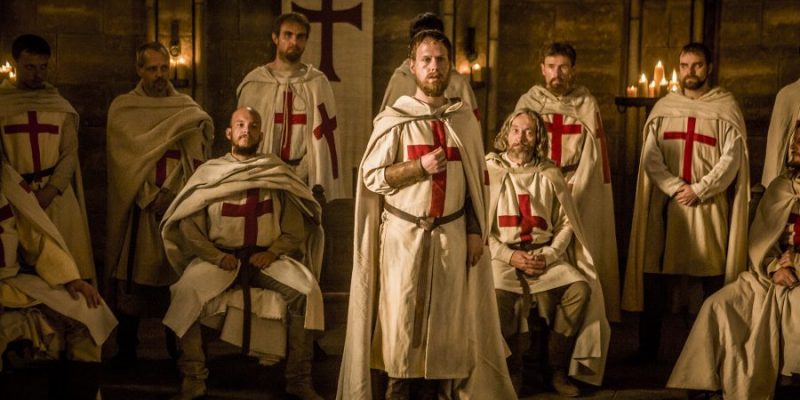 Knightfall: The Grail At Last & A Brother Turns – Review

The journey has been long, hard and, at times, seemingly impossible. But in the latest episode of Knightfall, “And Certainly Not The Cripple,” Landry’s hunt for the Holy Grail comes to fruition. In an episode with plenty of fun little twists and turns, Landry finds hope, possibility, the Grail, and….his mother?

Yes, folks, episode 107 finally put the Grail in Landry’s hands. But what was gained must be measured against what Landry also lost in the episode — a Templar brother, his child, his veneer of righteousness, and a young man who simply couldn’t let go. But he did get the Grail, and found his long-lost mother at last, who turned out to be the key clue in the search. That was quite a twist, wasn’t it, though I suspected that woman had a part to play when they first visited the orphanage earlier in the episode.

For all the relief of finally seeing the elusive Grail come out into the sunlight, perhaps the most revealing moment was watching Gawain finally give in to the demons that have been lurking in his heart since that fateful day at Acre when he took an arrow in the knee to save Landry.

He resented his demotion to initiate trainer, is in constant pain from his wound, has had De Nogaret (oh, he’s still hanging around the fringes of Paris) whispering sweet nothings into his ear, and finally began racing downhill when Landry confessed his indiscretions with a married woman while telling Gawain he’d not let him drink from the Grail to heal his wounds. 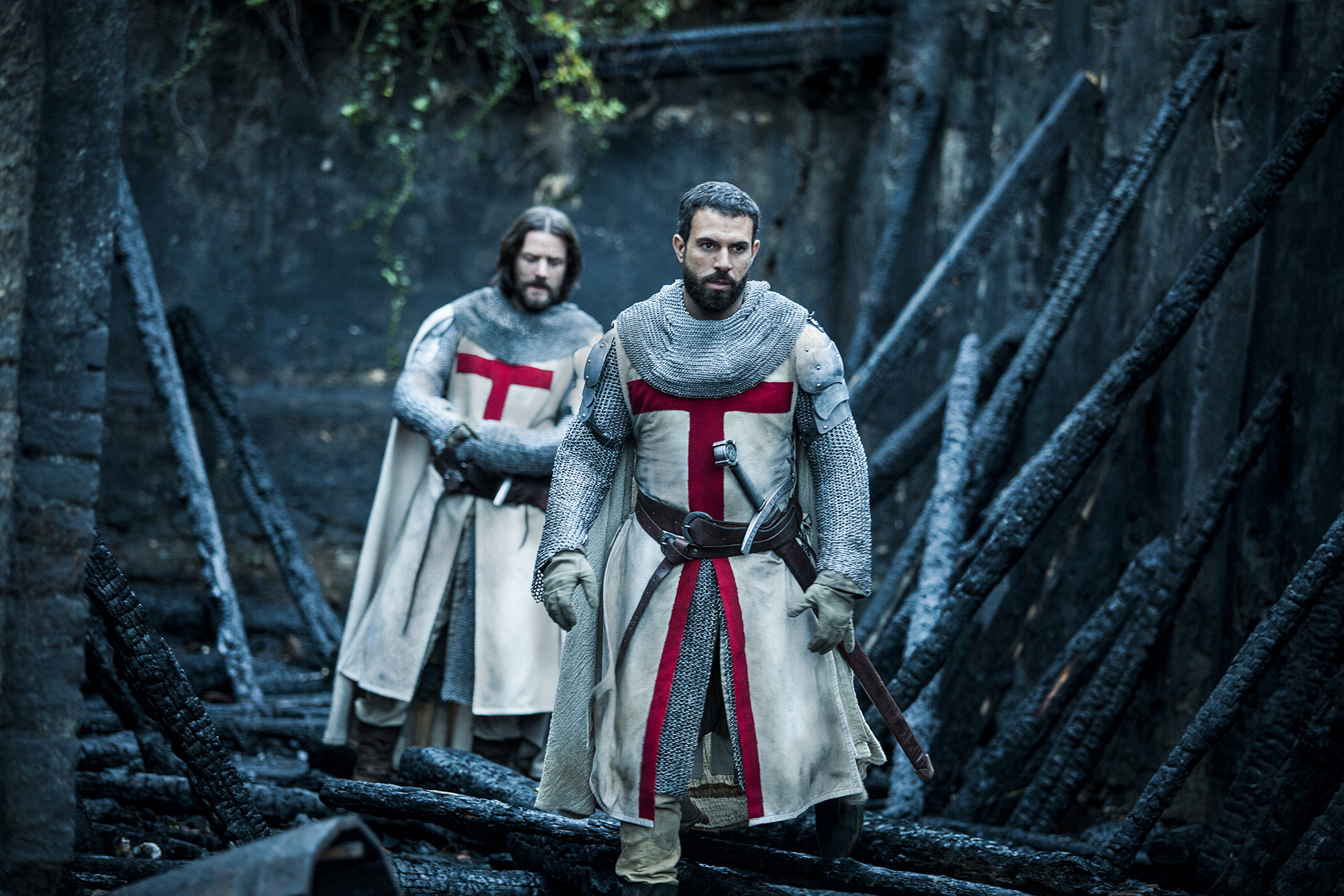 Gawain and Landry at the place he first met Godfrey.

For all that was going on in this episode, Gawain’s complete meltdown has been coming for a while. It was interesting to see how quickly it all went south for him emotionally. Denied a healing drink from the Grail if and when it was found, Gawain went before the cross to seek guidance.

It was a well done scene where Gawain sought answers, but instead talked himself into what he thought God would “want” from him — to take the Grail for himself. It was an intriguing glimpse into a man who felt he’d lived a Templar life the way it was supposed to be lived, but resented Landry and his wayward ways — and how that would eventually justify his attempt on Landry’s life at the moment the Grail was found.

The work of actor Padraic Delaney is stellar here as we see the full depth of his pain, anger and jealousy toward Landry and what he feels God has forced him to endure — and now asks him to do.

Now that we see Gawain’s fall is complete, my guess is that De Nogaret will put him to work in his “let’s wipe out the Templars” war that’s brewing. Gawain has certainly been a man of struggle through these seven episodes and in the end, we see him lose the mental battle he’s no doubt been waging a while now. This won’t be the last time he and Landry cross swords, I’d bet.

I’ve talked about how De Nogaret is a processor of information. We got a great look into that mind in this episode. As you recall, De Nogaret escaped the hangman’s noose in the last episode, thanks to the help of Uncle Malreaux. Well, as he works the streets of Paris in disguise, he does several interesting things — planting the seeds of dissension within Gawain and processing loose bits of information. He’s always probing and trying to put pieces together.

That moment when he puts the pieces together of Landry’s infidelity to the Templars with a married woman (thank you, Gawain), and the royal couple announcing Queen Joan is with child is a sweet moment, indeed. Again, threads of different colors are combined to create a tapestry that tells a full story. It’s a pleasure to watch him work, to be honest. In his heart he now knows that Landry and Queen Joan have been very naughty and that the child is not King Philip’s. “Royal bastard, indeed,” he says softly, a wry smile coming over his lips. Again, Julian Ovenden delivers work that is crisp and insightful into De Nogaret. 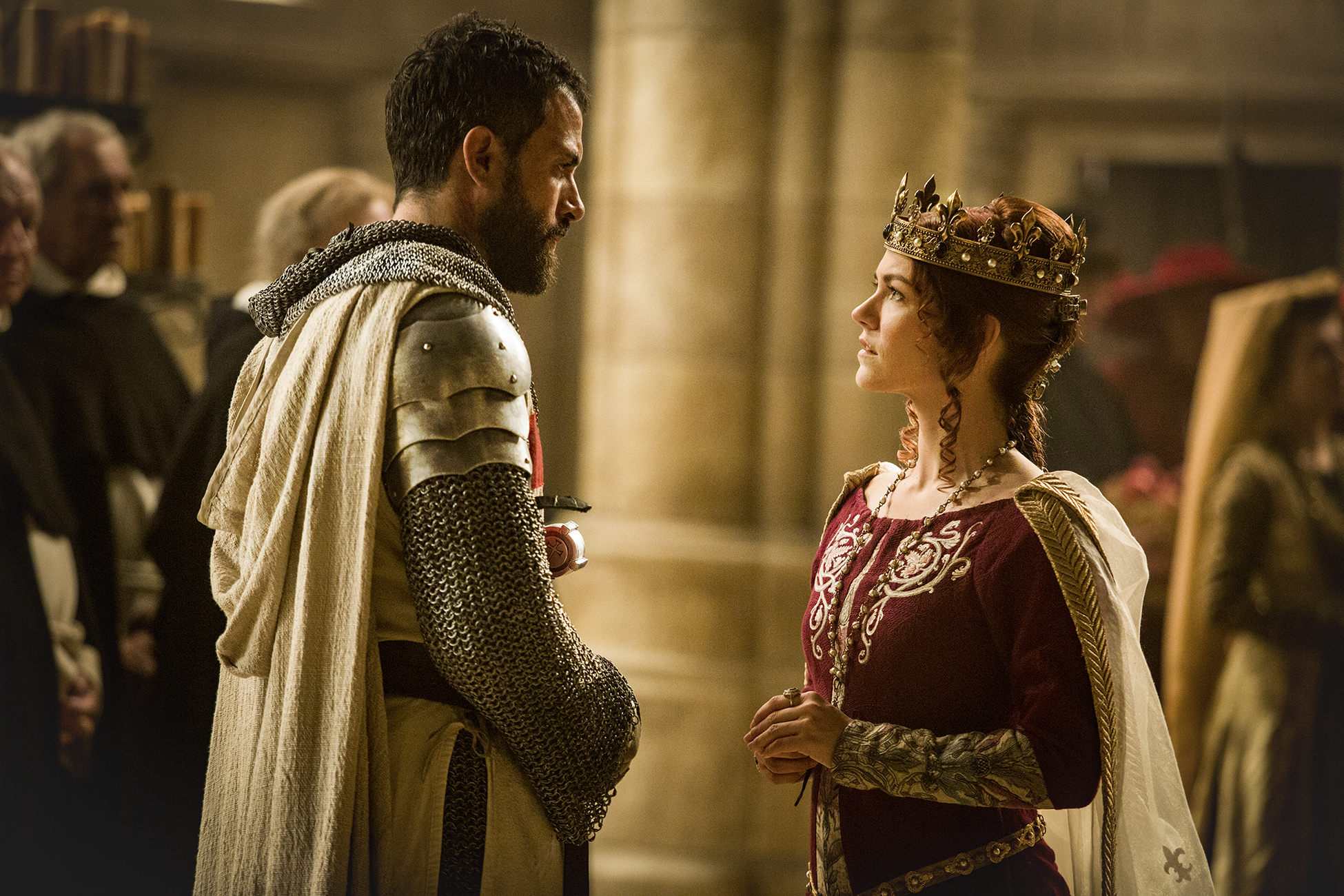 Landry and Queen Joan talk about their baby.

So here we go. How will De Nogaret use that information moving forward. Obviously, it’s a tasty tidbit that King Philip must be made aware of (and be convinced about). He’ll need to be careful, though, as there’s a price on his head, but if we’ve learned anything from De Nogaret, it’s that he’s resourceful. Could this be the kindling he uses to start that fire that leads to a purge of the Templars? Information, particularly damaging information, is like currency within the royal court, so he’ll need to spend it smartly and get the most “bang for the buck” without getting his head removed. Will he rise again?

I’m betting in the affirmative here, folks. I think our man is back and will be making merry mischief very soon.

I’ve talked for a while now about the impulsiveness of Parsifal and we saw that it ended in tragedy for the young man. His pain at losing his love Marie at the hands of Roland simply overcame him in the end — and proved to be his undoing. Although I have to applaud his audacity at disguising himself as a Templar from the Genoa temple sent to transport Roland back there, you sensed from the beginning that this wasn’t going to end well.

My initial thought was that the young man was going to screw up his attempt at exacting revenge on Roland and, in the end, get killed himself. Well, that nice bit of axe through Roland’s face certainly threw that theory out the window, didn’t it? Honestly, I was expecting a little more torture, but the emotional pain was simply too much to endure for Parsifal and, despite gouging Roland in the abdomen earlier, he decided that a scream of abandon, followed by an axe blade through the nose, was his best course of action. 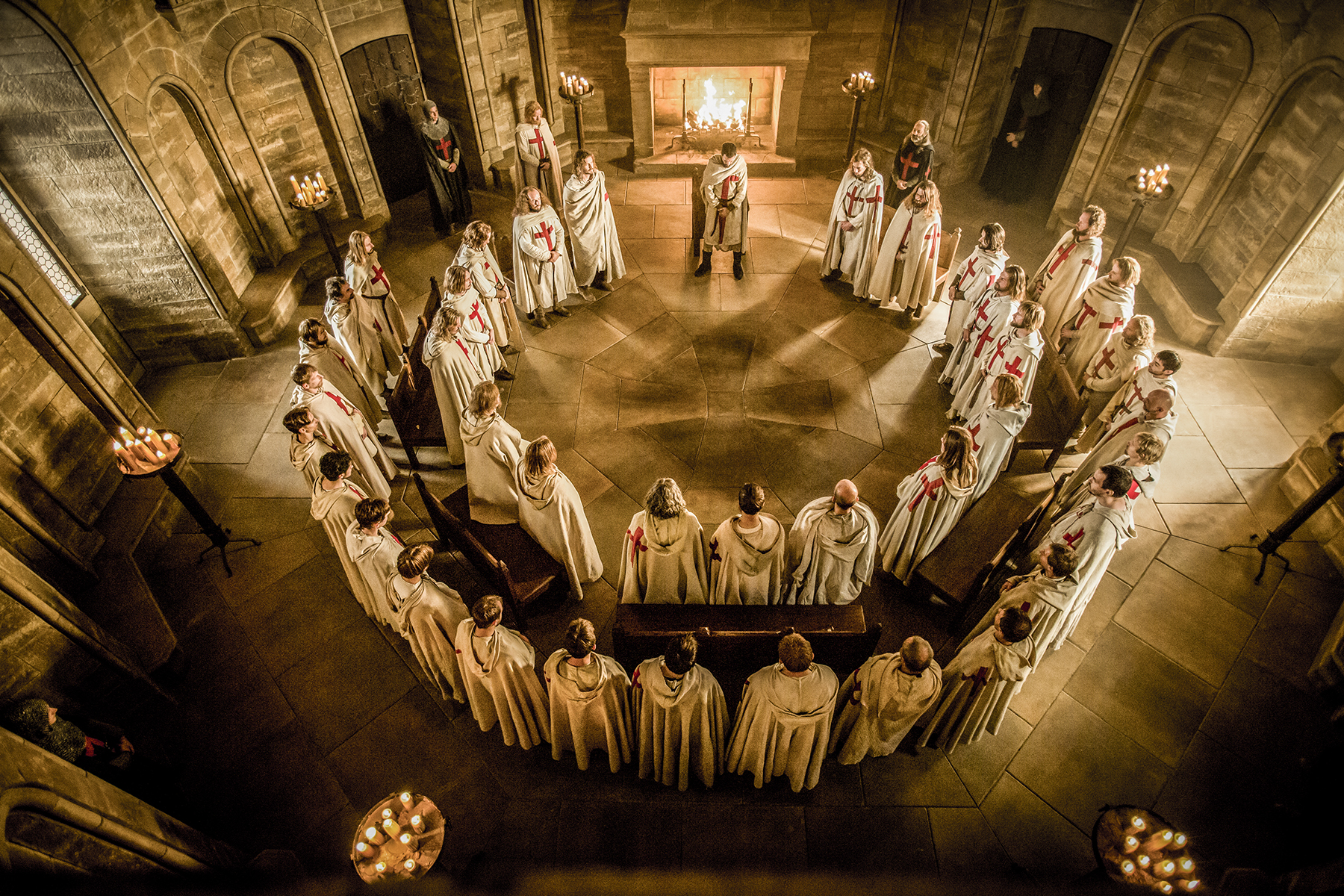 The Templars gather for a meeting.

Unfortunately, the bit of information he managed to acquire from Roland ultimately led to his death from a fellow initiate. His ‘friend’ Pierre demonstrated once again that there are shadowy forces working inside and out of the Templar Temple to acquire the Grail by putting a knife through Parsifal’s belly. RIP, Parsifal. At least, in the end, you got to divide and conquer Roland’s ugly mug. We’ll have to see what Pierre’s role will be moving forward as he likely is in the employ of the enigmatic ‘IV’ and not working alone. Someone is pulling some pretty impressive strings. Pope Boniface, perhaps? He strikes me as a shady, driven man with little regard for anything or anyone other than himself. We’ll see.

While all this Grail drama was going on, Queen Joan demonstrated the spunk and moxie we’ve come to expect from her when she learns her cousin, the Queen of Catalonia, is making invasion plans for Navarre. Displeased with her husband’s slow plans to aid the region, she takes off on her own the rally the nobles for a defense of her birthplace. It’s fairly likely that Queen Joan will have to deal with her cousin face-to-face at some point and we’ll have a showdown between a mother who’s lost a child and a mother who’s expecting a child. The queen of Catalonia seems to be a tad unhinged, so something odd may be in the offing here.

Of course the King’s irritated and Landry’s worried and there’s a mountain of issues to be worked through before Navarre can be rescued. So, we’ll see who steps forward to handle things in this new land. Perhaps Joan simply takes matters into her own hands and dispatches her cousin once and for all? It’s worth a thought.

So, given all that went on in this episode, perhaps the highlight was King Philip deciding he needed a “boys night out” with Landry. Philip appears to be quite the frustrated soul, particularly after his wife defies him and flies off in the dead of night to Navarre. I can picture it — Landry and Philip throwing back flagons of ale at a local public house, telling bawdy tales of conquest while also lamenting the struggles they each have in their lives. 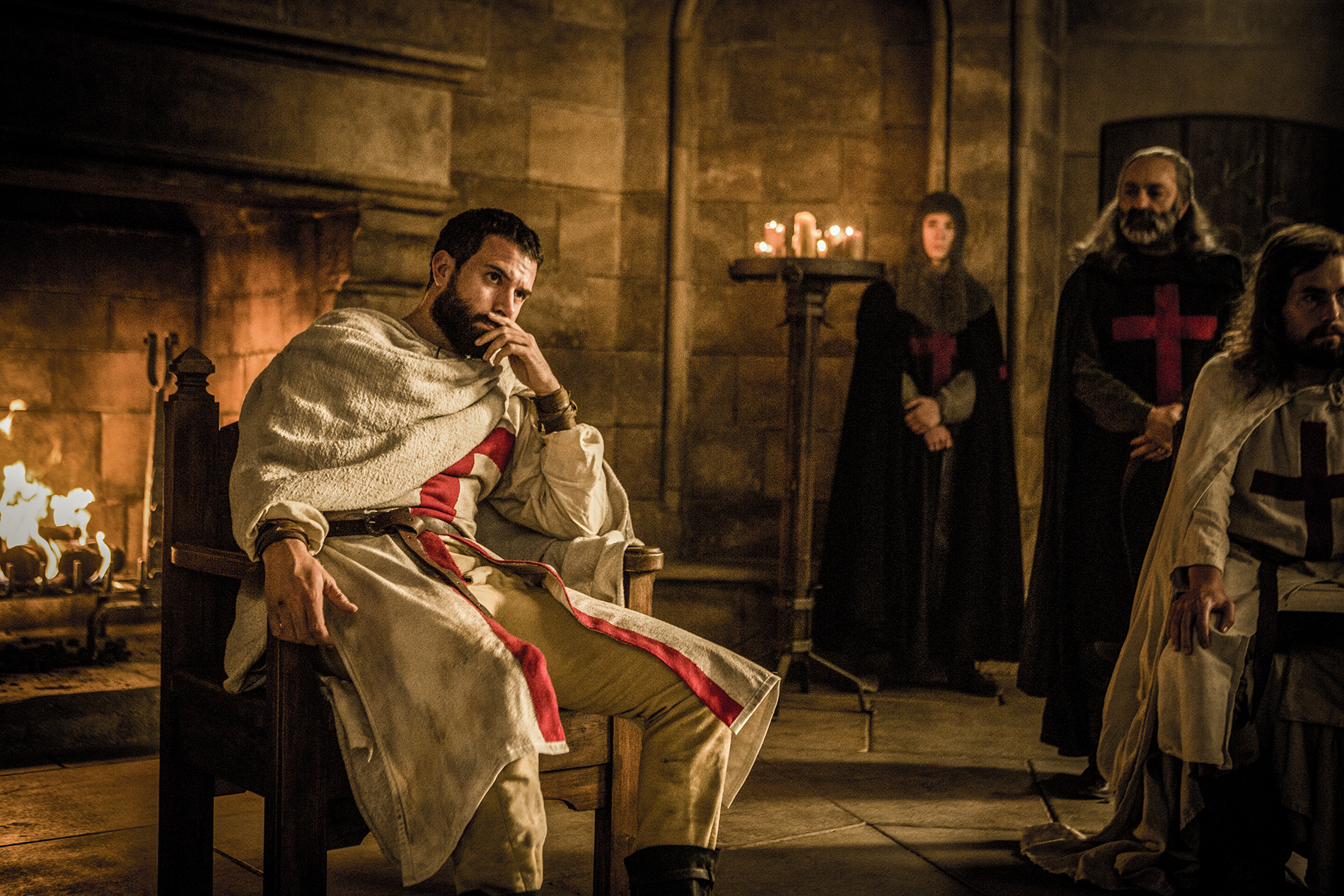 Landry contemplates the news that Queen Joan is with child, his child.

I have a newfound respect for Philip after he’s jostled and notes that he “always lets it go,” leading to a mano-a-mano fisticuff bout in the pub. Philip drops his antagonist nicely, which sets off a brouhaha in the pub. Just a couple of men knocking off the rust and taking the edge off what has been a trying time for both. A fun little story arc, to be sure and one we should remember as happier times for two friends who, I suspect, are going to be opponents in the near future (De Nogaret, I hear you).

I sense a hardening of Philip is at hand. Perhaps he’s done just “letting it go” and will embark on a, shall we say, more hardline tact with wife and kingdom?

With all that we saw in this episode, it feels like things are about to break hard and get very messy. Betrayals are in the offing, decisions that prove costly will be made, and how we viewed the people (and the show) earlier will be altered moving forward.

My feeling is the Grail will change hands more than once before this season comes to a conclusion and lives will be altered by those occurrences. As always, the writing, acting and overall vibe of Knightfall remains superb. As we head into the homestretch of season 1, I can’t help but think this show has a tremendous amount to give in a second season.