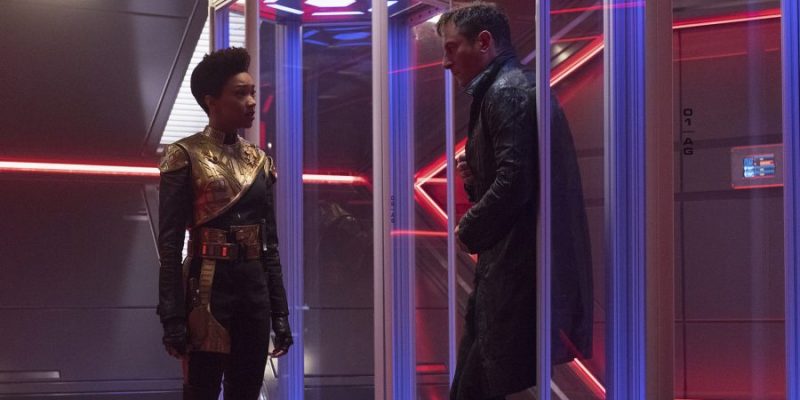 Everything the crew of the Discovery used to be has been renovated and recalculated as they continue to search for a way out of this alternative, ultra-violent and suspicious universe. It’s not an easy feat to change your stripes, and like the tiger making that attempt, there are costs along the way — both physical and mental as we found out.

Episode 11 of season 1, “The Wolf Inside,” will continue to draw comparisons to the TOS episode, “Mirror, Mirror,” but while the similarities are certainly there, they often come with a nice little twist on the original, which I found to be a fun addition that worked nicely. I thought this was an interesting, thoughtful episode. What do any of us do with the ‘wolf inside’ each of us?

But first, the biggest “other” shoe to drop was the official revelation that Ash Tyler was, in fact, the long-lost Klingon Voq, the lover of L’Rell. There have been hints and suggestions for a while now, most recently when our good Dr. Culber discovered extensive bone and structural changes to Tyler, who promptly killed him. Unfortunate, but that revelation sent us on the path we trod in Ep. 11, where Tyler’s conversion was outed once and for all. 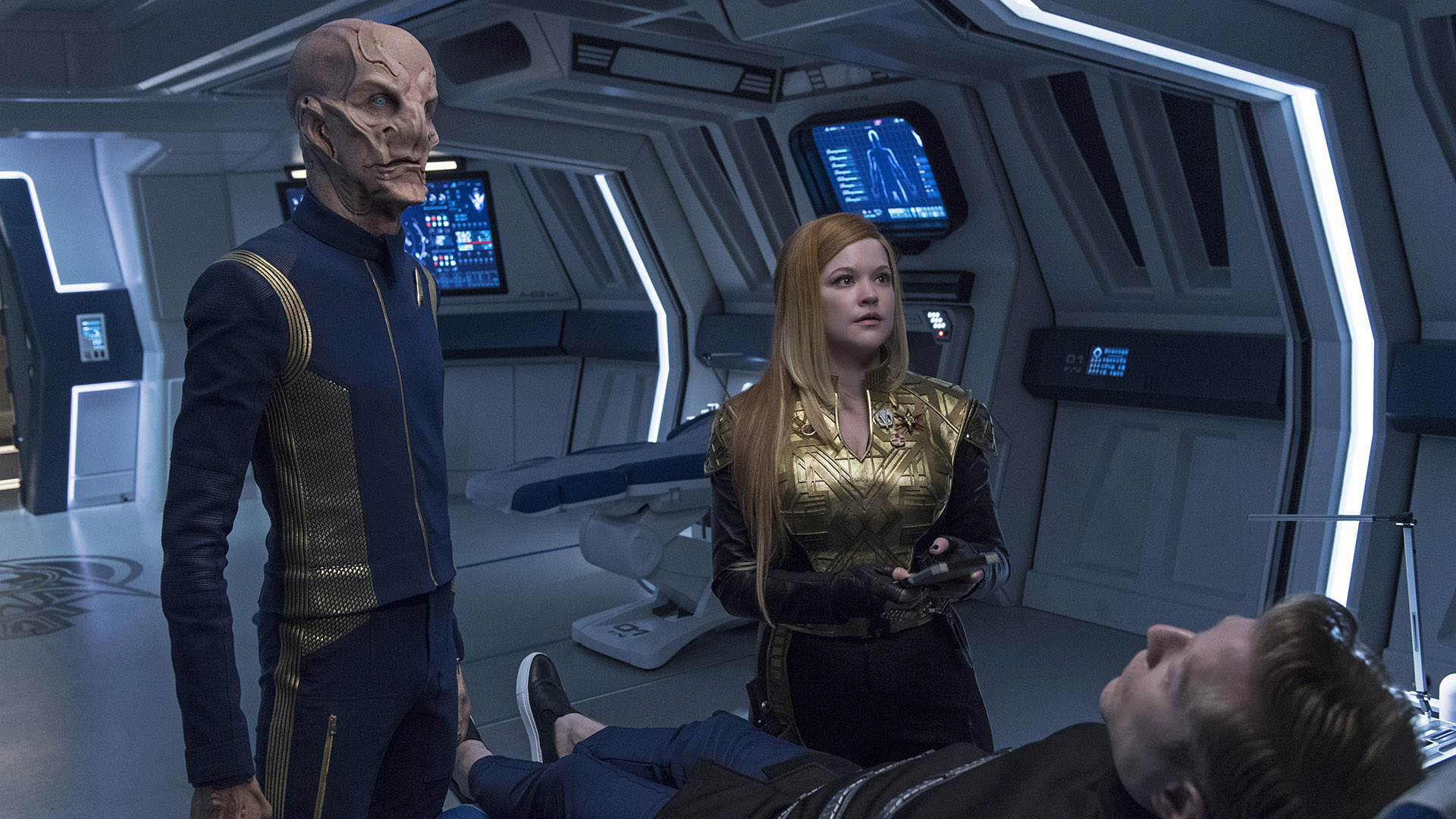 As Burnham tried to broker help with the multi-race coalition in rebellion against the Terran Empire, Ash Tyler came face to face with Voq, the leader of the rebellion. And then the memories came flooding back, which led to a Voq-on-Voq fight, some Klingon being shouted by Tyler, and the inevitable realization by both Tyler and Burnham that he was something other than he appeared.

You figured Burnham would work her way past Tyler’s indiscretion on the planet, but once he went full Klingon in her room after the return to the ship, the pot roast was in the crock pot — and simmering nicely. Voq is back, even though he doesn’t look like his old self, but fully Klingon in thought and deed.

It was a sad moment as they dragged Tyler away aboard the mirror universe ship, likely to death. Burnham’s burgeoning physical and emotional relationship with Tyler left her vulnerable on many levels. I felt for her as someone she cared about, and thought was her “tether” to reality as she played her part in this mirror universe, essentially betrayed her. It was a betrayal of large and unfriendly proportions, one that will certainly leave a scar emotionally moving forward. The work of Shazad Latif jumping between Tyler and Voq in the episode was stellar stuff. Props on the Klingon, sir. You delivered it like a warrior. 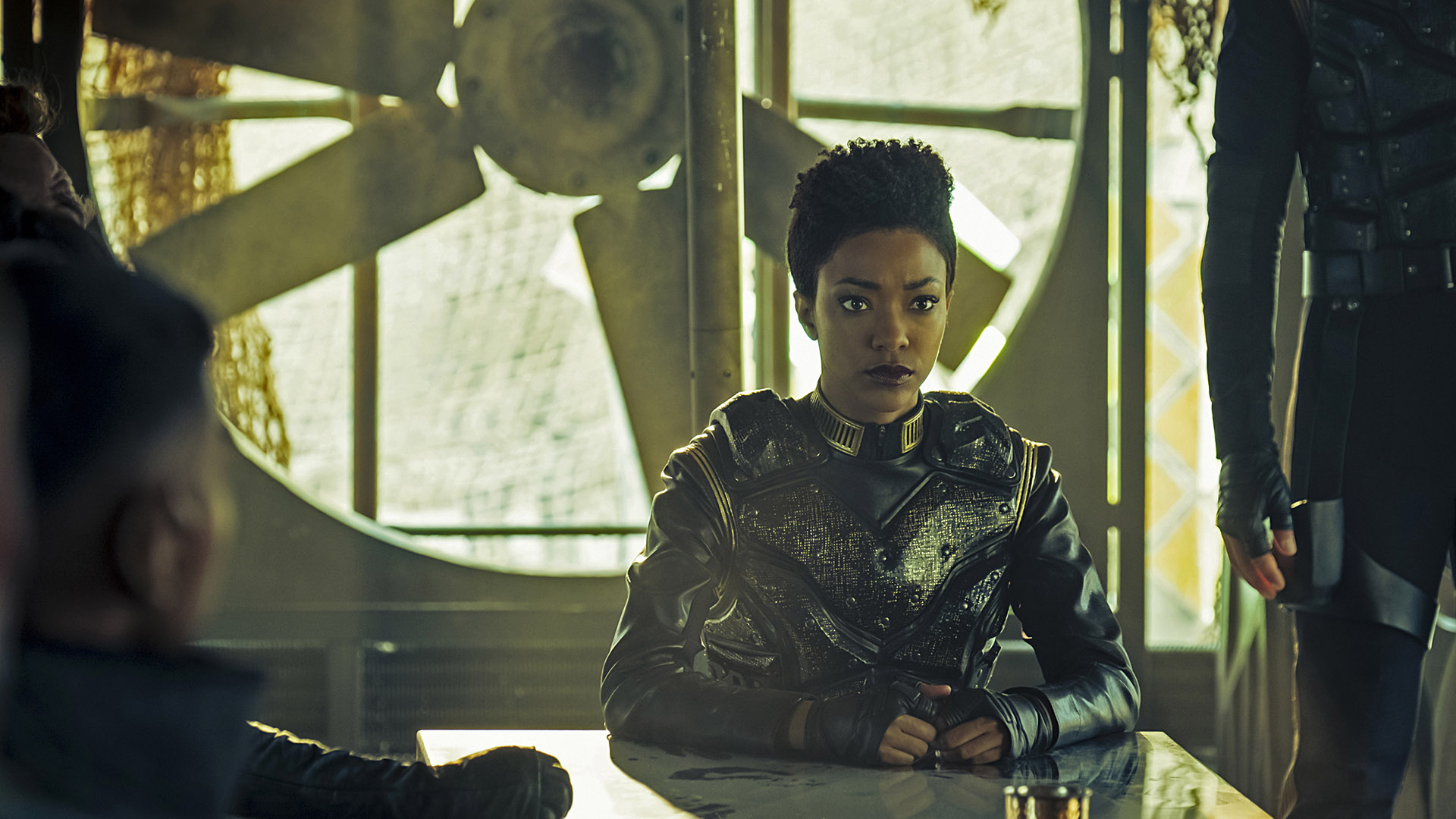 And Burnham offered a nice series of voiceovers during the episode, discussing the struggle she finds in separating her real self from this vicious, sadistic and violent self she needs to project as captain of the Shenzou. The wolf within her was fighting hard to either be let loose, or be subjugated, as she captains a ship riddled with fear and opportunism in the mirror universe. As with any good actor, Burnham could feel herself getting lost in the part. Scary stuff.

There were several nice surprises in this episode, including the reveal of the Voq-Tyler relatioinship, and the fun little switcheroo the Discovery made when Tyler was beamed into space to die (and then not die). Personally, I’m glad to see the Voq character will be with us some more and look forward to his reunion with L’Rell now that he’s fully aware of who he is. Will our two Klingon love birds start some trouble once the Discovery returns to it’s proper universe? Oh, I’m counting on it.

In a nice little ode to the TOS episode “Mirror, Mirror,” we were treated to a Vulcan mind-meld moment that changed the course of discussions between Burnham and rebellion leader Voq. Unlike the TOS episode where it was Spock melding with McCoy, the new episode had mirror universe Sarek melding with Burnham, where he saw enough to know that her offer of helping the rebellion was legitimate. He saw some other tidbits, too, so we’ll have to wait to see whether Sarek shows up again to help get Discovery home. Here’s hoping we see Rebellion Sarek one more time before we’re done with this universe. 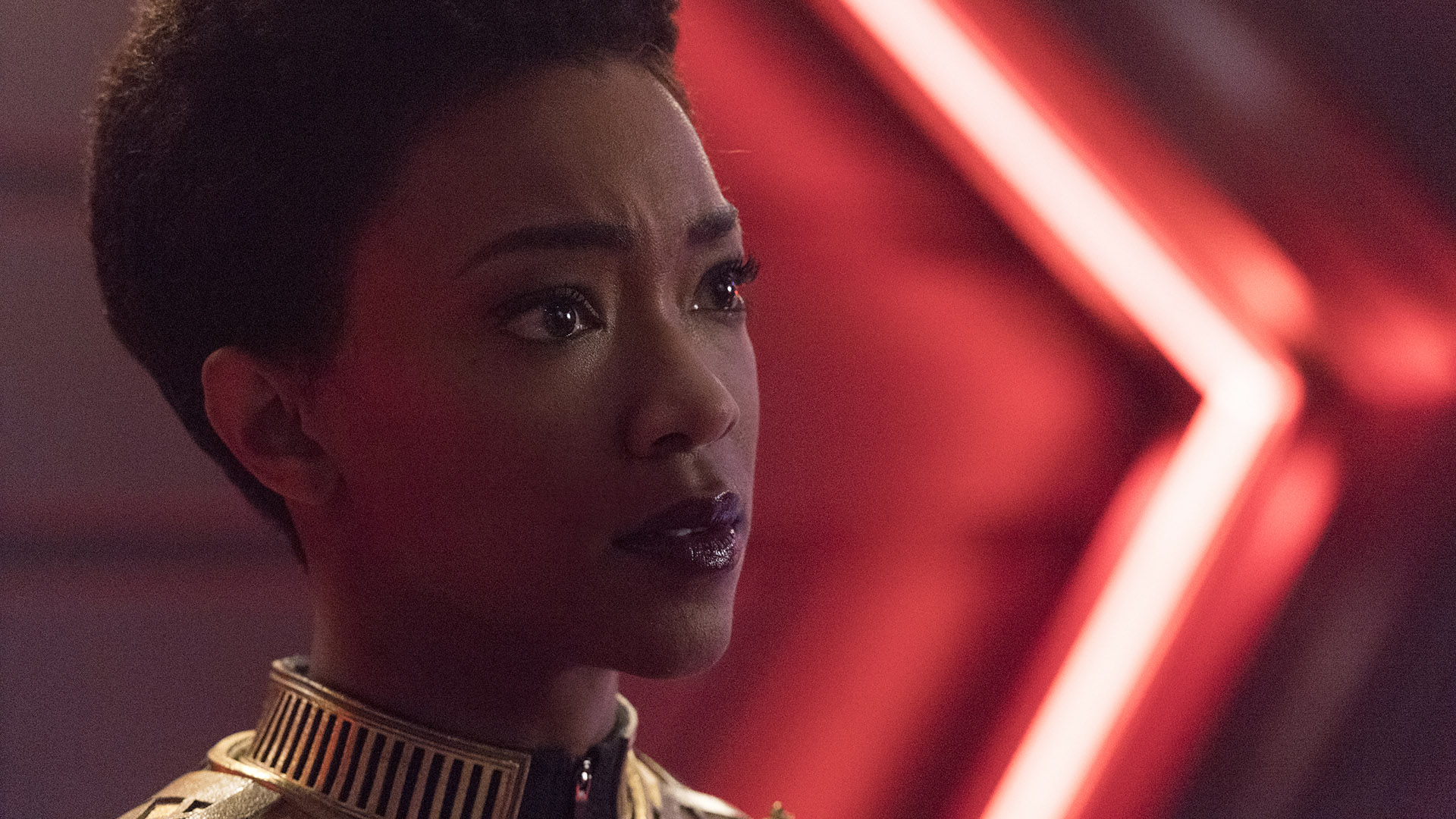 The fact Sarek is referred to as a “prophet” in this mirror universe, and a key counselor amongst the varied rebellion races, is a nice touch. The fact that these diverse races are coalesced into a cohesive force behind a Klingon leader truly intrigues Burnham. It’s unexpected and a bit confusing based solely on her knowledge of the races in her normal universe. But here, in these troubled times, a leader has emerged and others are following him.

She hopes to find out why and eventually to use that knowledge to change things in her regular universe, though it would seem that the need to survive often creates strange bedfellows – and that’s what we’ve got here. Unfortunately, given the emperor’s untimely arrival, whether the rebellion reached safety in time is a question we’ll have to wait for an answer to.

The return of Michelle Yeoh as the shadowy emperor of the Terran Empire was a nice and welcome twist. She has a certain air of badassery as the emperor and her return to the fray certainly will bring conflicting emotions to the fore for Burnham. I’m anxious to see where this little twist takes Burnham in the next episode or two. A captain she loved, then betrayed, in this dark and dangerous universe now stands before her again. Hello, emotional conflict. This was a tough episode for our Michael Burnham. Lots of emotions, many of them negatives, were flowing her way. 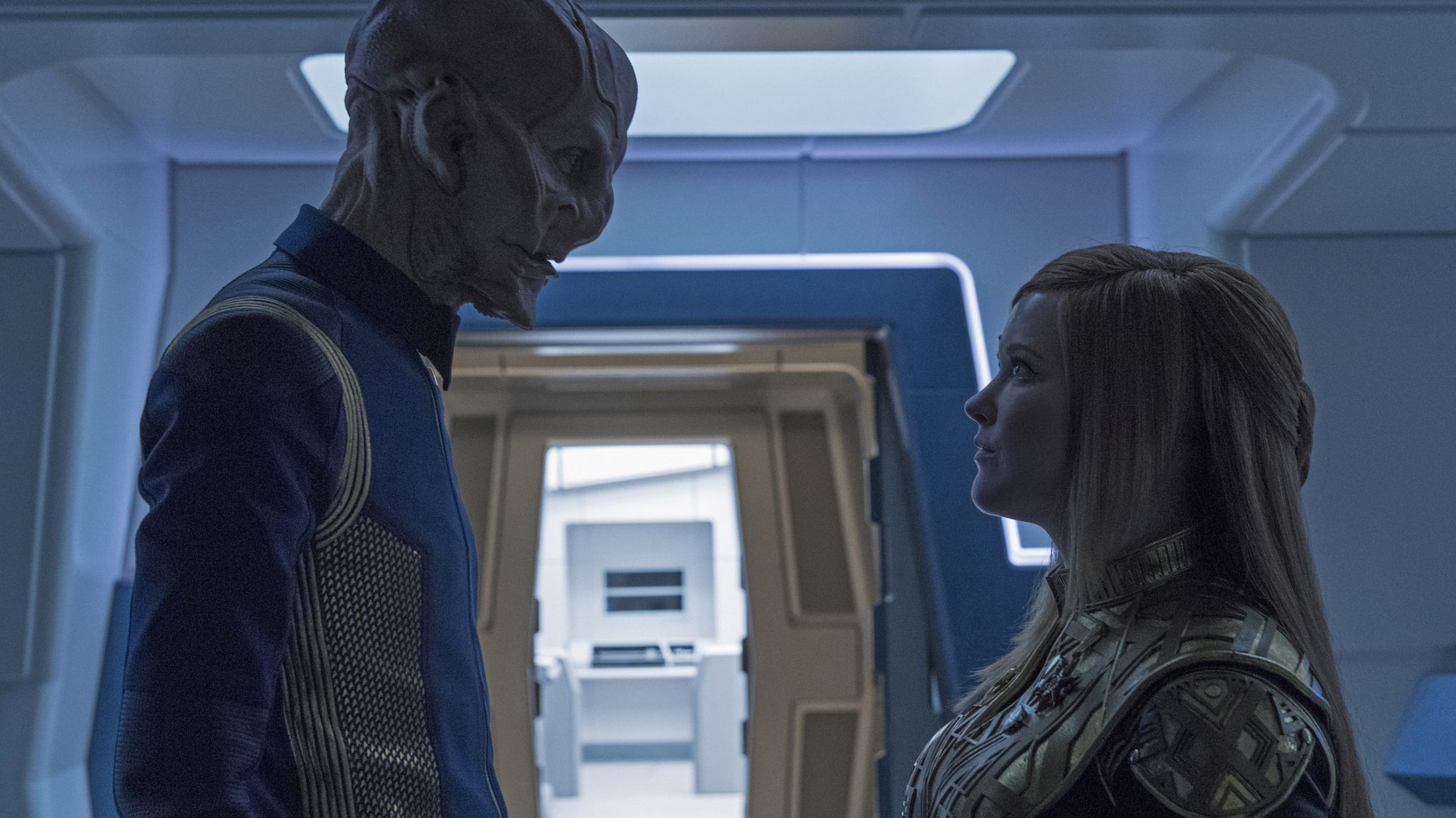 Granted, this Philippa Georgiou is the leader of an oppressive, violent and sadistic regime, but her presence will no doubt toss the mission to get back home into an interesting tangent for Burnham, Lorca and the Discovery crew. Will she see through this version of Burnham? If so, what does that mean moving forward? Again, a great little twist with her delivering the role of emperor, so let the fun begin.

I was hopeful that the Tilly gambit to bring Stamets back would be a victory for Tilly. Unfortunately, it looked very much like things went south and that Stamets had died, but we got a little bit of hope at the end as the life sign indicators beeped back into life. Stamets has a part to play in getting this crew home, no question in my mind. What that part will be, however, remains to be seen. But I”m going to take that glimmer of life sign and his arrival in a fun new world as a good sign moving forward. The death of Dr. Culber, however, should still resonate with Stamets moving forward, so that’s an intriguing potential story arc ahead. We’ll see where Stamets and the spores lead us.

Personally, I’ve enjoyed the mirror universe story line to this point. It’s always interesting to see how a group raised in one universe functions in a mirror universe that offers an entirely different vibe. The compromises that need to be made, the conflicts that arise, and the emotional and physical struggles are always so interesting. Looking forward to seeing how Lorca and crew resolve the mirror universe problem and the role the USS Defiant plays in that resolution.