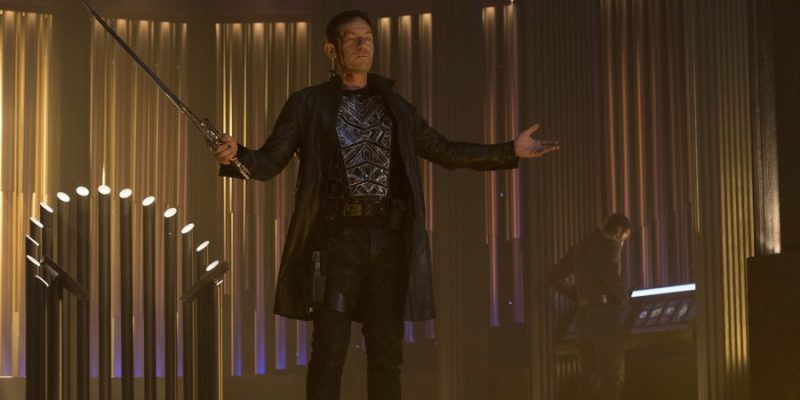 Star Trek: Discovery – A Coup & Home in ‘What’s Past Is Prologue’ – Review

Well, that was interesting, wasn’t it? The Lorca conundrum was resolved at last, Burnham came to grips with betraying Captain Georgiou in both universes, and the crew of the U.S.S. Discovery finally, happily got home — sort of.

‘What’s Past is Prologue” settled some of the questions we’ve had lately about the story arcs we’ve seen, generated a few more moving forward, but perhaps most importantly we got to see the leadership qualities of Saru and the tag-team effectiveness of Tilly and Stamets. In my eyes, while there was plenty of blasting and battling aboard the queen’s city-sized space barge (and I do love that), those three really stood tall in this latest episode.

Saru, who seemed like such a stiff, straight-arrow, little-room-for-compromise type of character when we started, displayed not only the collective cool of a man in command, but also the ability to help those under his command rise to the occasion, which Tilly and Stamets most certainly did. The Discovery’s return to its normal universe was due, in no small measure, to those three. 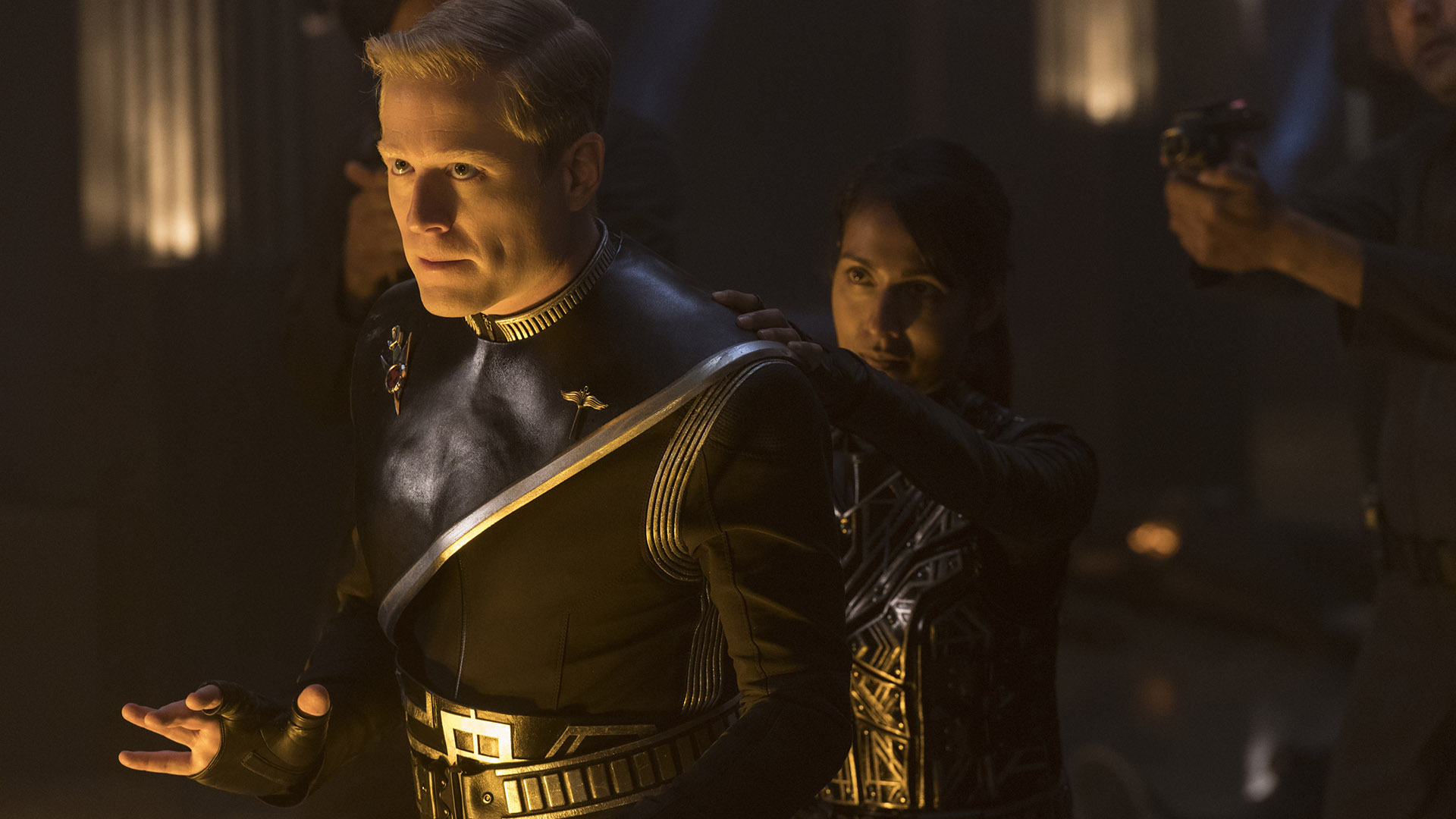 With the Mycellial world infected and dying, then the discovery that this could destroy all life throughout the mulit-verse, Stamets and Tilly were a formidable team in hatching quite the elaborate plan to get the Discovery home. Once again, it’s worth nothing that Stamets and Tilly are two characters that have developed nicely as the first season of Star Trek: Discovery has moved forward.

I’ve noted their ever-increasing development a couple of times this season, but thought this episode was a good reminder of how far Saru has come from when we first met him. Kudos to Doug Jones for helping to bring Saru such a long way this season. In this episode, in particular, he demonstrated leadership, moxie, team-building and the ability to inspire those around him.

And that’s what the crew did — raise its professional level to help their ship get home. I found myself a touch inspired by Saru’s positive words and willingness to trust his people. He sounded very much like a captain, didn’t he? .

And within all that, we got a nice little ode to Star Trek lore when the “I don’t believe in the no-win scenario” call went out. I’ve enjoyed Star Trek: Discovery for the little bits of Star Trek history it has imparted as it has moved from episode to episode this season. Some moments were big, some small and subtle, but it has been fun to have that as part of the show’s DNA. Personally, I think it serves the show well to call down some Star Trek show/movie history. 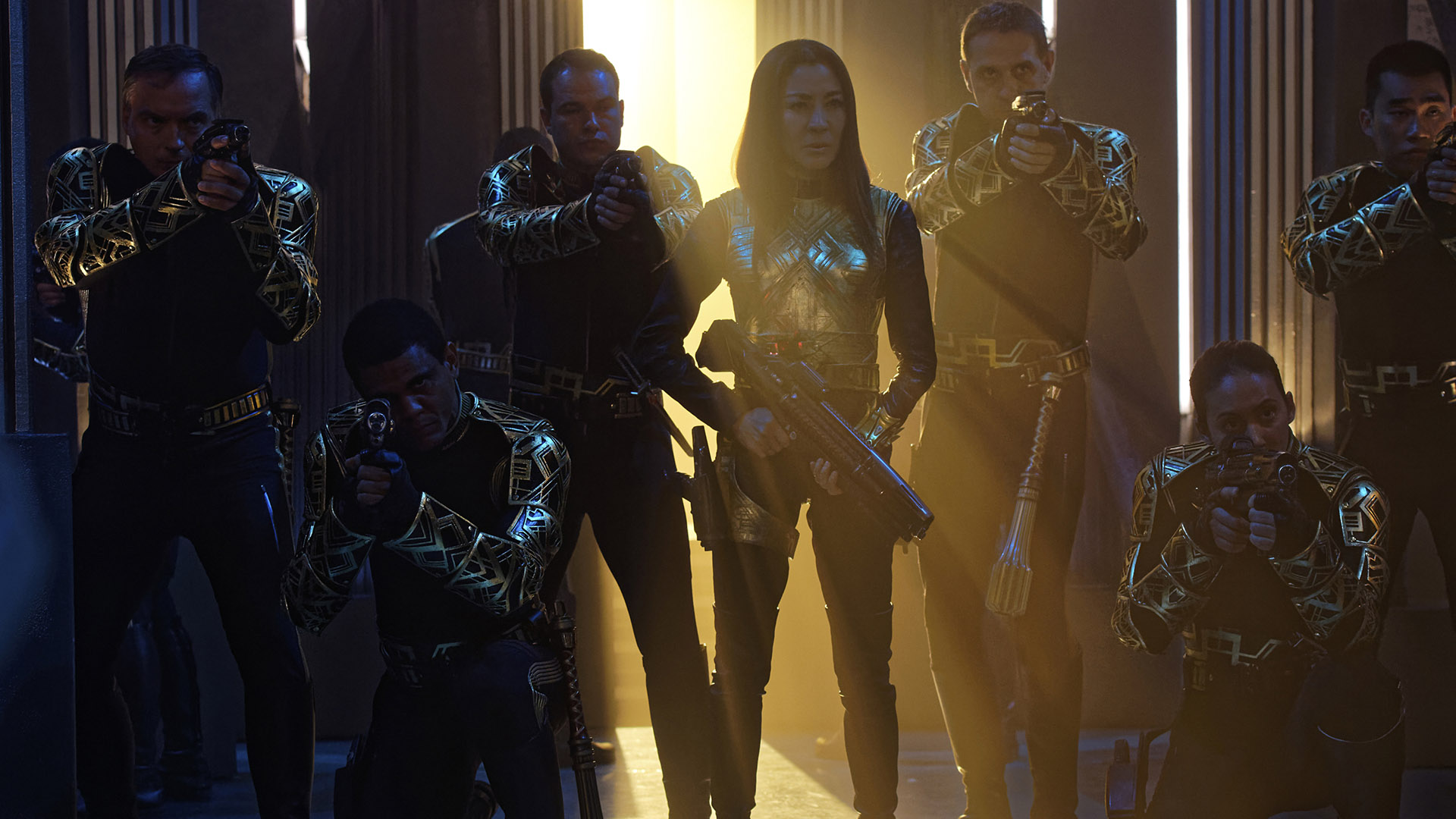 And Sunday we got a fun one when Stamets and Tilly got to discuss the “no win scenario” at length and stated in no uncertain terms that they weren’t buying it. James T. Kirk would have nodded his head in knowing admiration as Tilly and Stamets dug their heels in and got to work on turning a Mycellial explosion into a way to not only get them back to their universe, but repair the network. It has been  a joy to see Saru, Tilly and Stamets kind of come into their own with Burnham and Lorca away.

And what of our dynamic duo? Lorca’s journey to the other universe was partially explained, though I’m curious what became of “good” universe Lorca. However, his use of Burnham and the spore drive to get back to his proper universe and renew his coup against Emperor Georgiou was not only involved, it was pretty darn impressive. Jason Isaacs’ turn as Captain Gabriel Lorca was on-point almost from the start of this series. And, in the aftermath of his battle in the throne room, I was more than a little sad to see him gutted by Georgiou. But…he deserved it. So, there you go.

I felt from the first that the casting of Isaacs and Michelle Yeoh lent a real vibe of seriousness to this newest Star Trek endeavor. And once they were together in this episode, you got a real sense of how talented they are and how they helped elevate Star Trek:Discovery with their presence. I can’t say enough about the work all the actors in this series have put in. Very interesting and engaging characters from top to bottom. Now that’s good Star Trek. 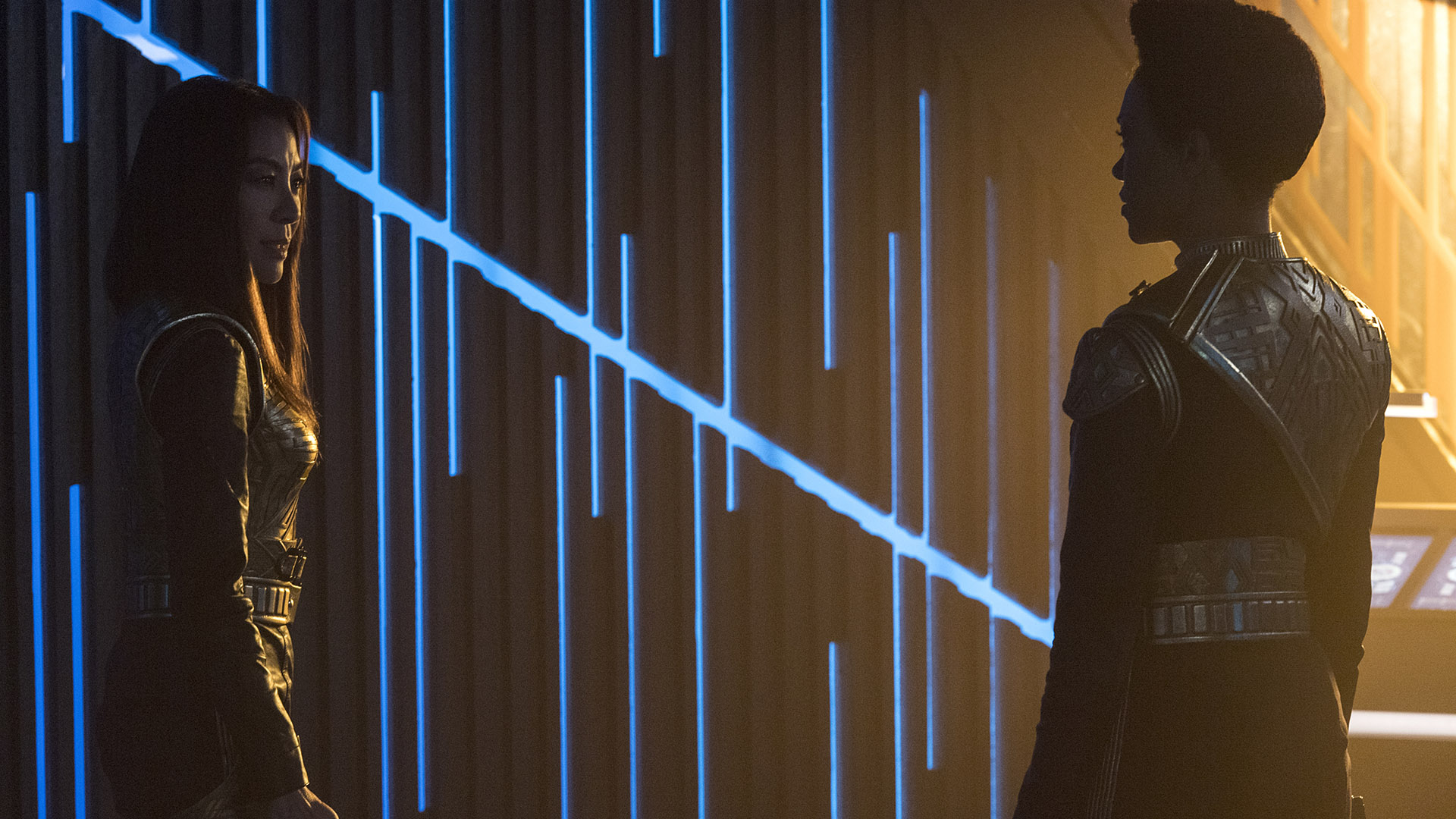 I had a feeling that Burnham wasn’t going to go quietly once the shooting was done, but I honestly didn’t think she was going to drag Georgiou back to the Discovery with her. When the deposed emperor was ready to stand her ground and sacrifice herself to give Burnham time to escape, I thought “well, that’s it.” Obviously, Burnham wasn’t going to betray her “captain” a third time and saved her on the transport back to the Discovery.

Despite the far more violent and opportunistic universe they were from, both Lorca and Georgiou showed some elements of compassion and desire where Burnham was concerned. Lorca wanted Burnham to join him in ruling the empire with the overtly iron hand he felt Georgiou lacked, while the one-time emperor couldn’t shake the feelings of “daughter” that she felt for Burnham — even a mirror universe Burnham.

I wondered why the save (though I’m delighted Yeoh is sticking around for a while), but if you watched the previews for next week, it looks like the alternate universe Georgiou may have some vital tactical knowledge that the Federation could use. Oh, this should be good. 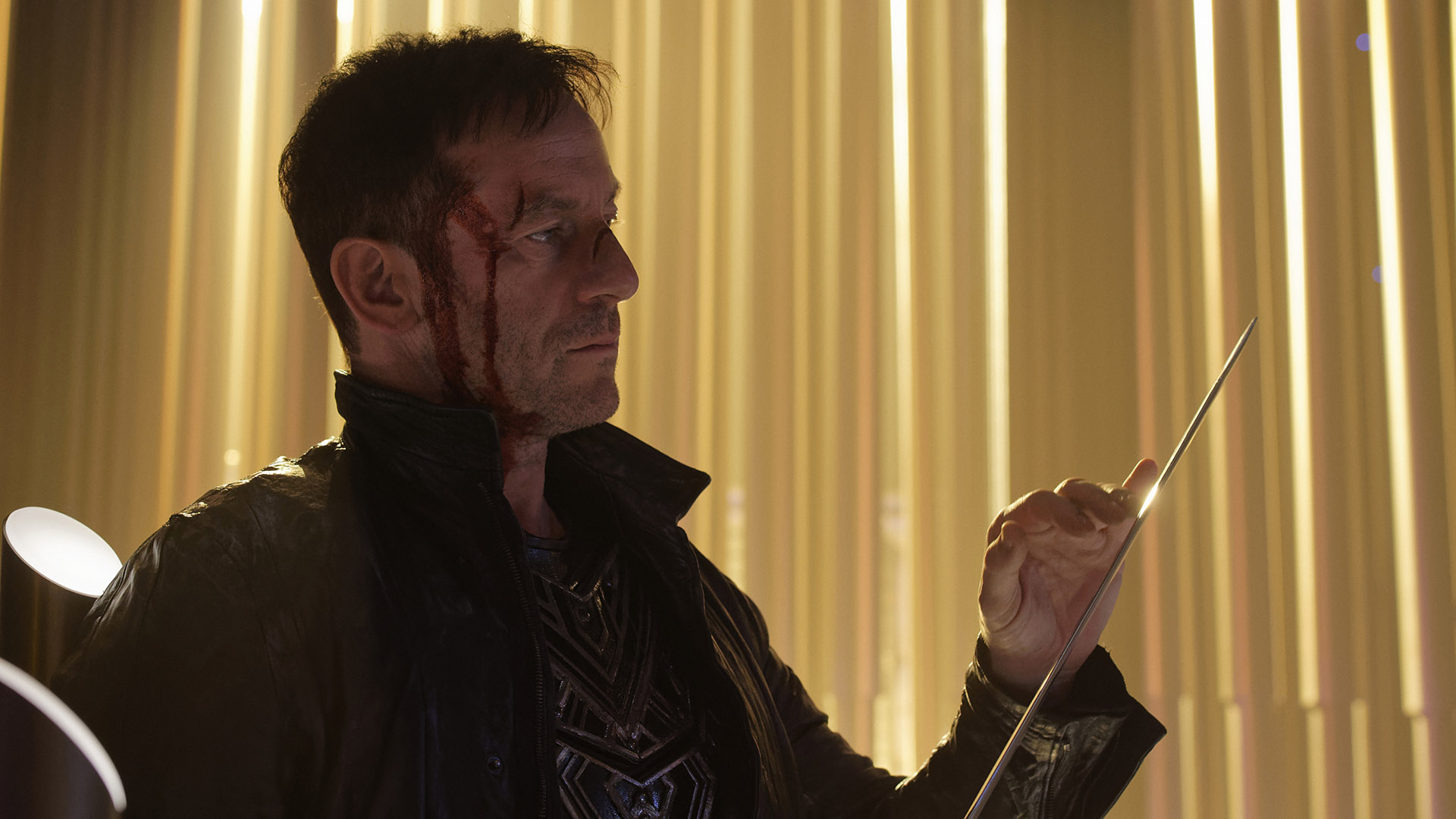 So, we’ve got the Discovery back in its own universe thanks to Tilly and Stamets figuring out the spore drive issue — but nine months later. The Klingons appear to be on the threshold of winning the war, but we’ve got a new Georgiou on the scene who has spent her life conquering other peoples. So, she’s got that in her pocket, which should be exciting.

Well, there you go — help from an unexpected place. Should be more than a little interesting to see just how bad things are for the Federation and what the Discovery can do moving forward. Will Georgiou be the wild card that helps the Federation take back the initiative? Can she be trusted? With Lorca gone, what will Burnham’s role be as she proclaimed that she “started” the war and now wants to “finish it.” How, Michael Burnham? How?

We’ve only got a couple more episodes of the initial season of Star Trek: Discovery and I think the show has certainly turned a lot of naysayers into fans. I know I was a bit skeptical at first, but I’ve come around completely. It’s easy to get distracted by the passion so many have for Star Trek canon, but I think this show has done a nice job of combining historical elements with fun storytelling. And that’s something I enjoy and will keep me watching.

My one regret from this story arc was that we didn’t get a little more information about the U.S.S. Defiant’s visit to the alternate universe. But, you can only cram so much into 46 minutes of storytelling.