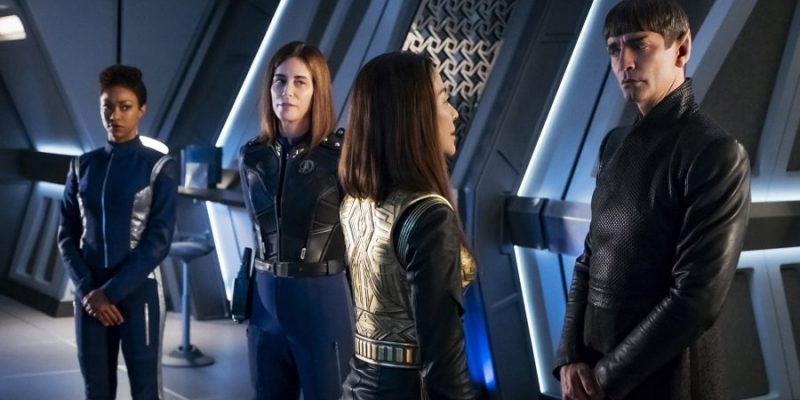 You know how I knew Emperor Georgiou was going to be a key component in the Federation’s flagging war against the Klingons? When she stepped off the transporter pad and addressed Saru in a contemptuously delicious way by telling him to get on his knees before her and said to Burnham, “Yesterday we dined on the entrails of his brethren, today you seek his favor?”

It was unappoligetically raw and confident  And that is exactly what the Federation is going to need against a Klingon foe that apparently has all but won the war. Tough, hardened ruthlessness will be the order of the day, something the Federation isn’t equipped to offer, but Emperor Georgiou most certainly is.

By the end of this episode, “The War Without, The War Within,” we had circled back to where Star Trek: Discovery began – with Georgiou in the captain’s chair flanked by Burnham and Saru. Interesting how the show has come full circle over 14 episodes, isn’t it? A long, strange trip back to the beginning, indeed. 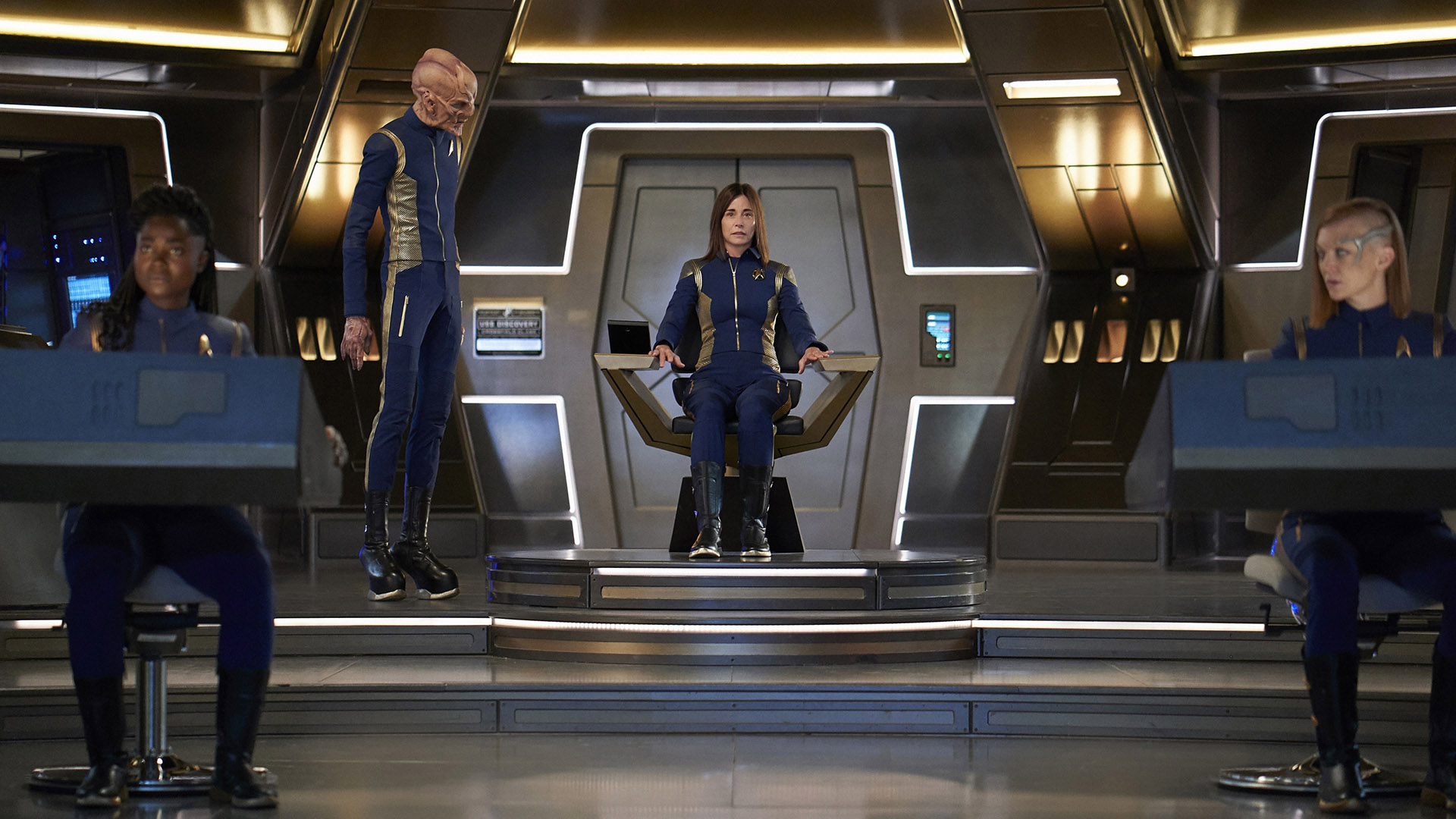 I have to give the creators and writers for Star Trek: Discovery full marks for delivering on the promise of strong and engaged female characters. “The War Without, The War Within” was perhaps the best and most complete demonstration of that progression to date. The episode resonated with strong females taking the lead in different and important ways.

Tilly took the lead in welcoming a shaken Ash back, and her leadership, though not from the captain’s chair anymore, opened the door for others to start to accept Ash once again – including Burnham in a shaky way. The scene in the cafeteria where Tilly sits with an isolated Ash was not only touching, but a testament to Tilly’s growth as a leader aboard Discovery.

But she wasn’t the only one. Georgiou, Burnham, and the return of Admiral Cornwell all beckoned us to important moments in this episode, moments the ladies were fully in command of. Georgiou not only offered important intelligence on how to defeat the Klingons, but negotiated a deal to take back the captaincy of the Discovery. Burnham seems to be front and center to the Klingon conflict and often works her own program in the face of orders or logic. 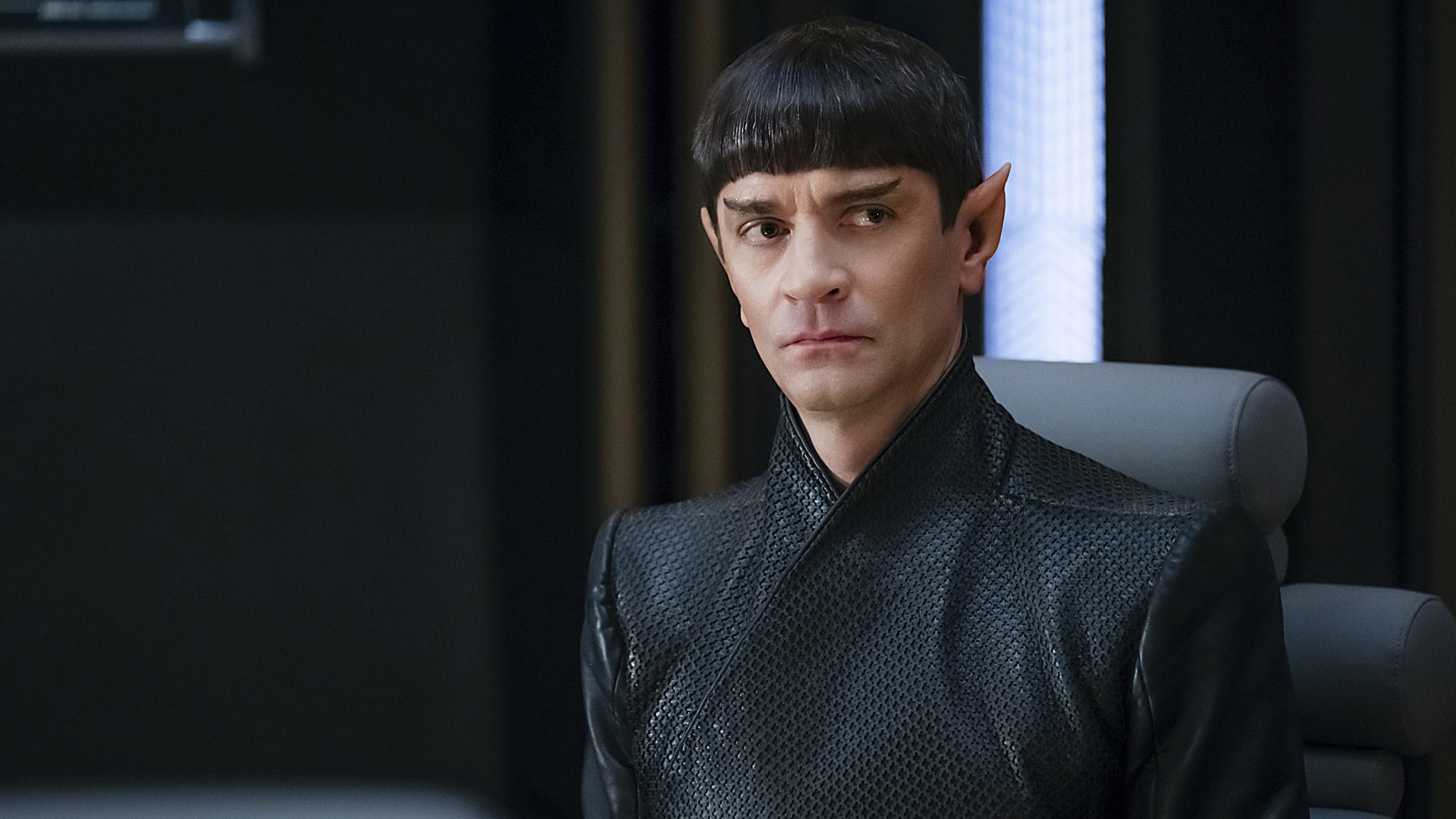 “The War Without, the War Within” — Episode 114 — Pictured: James Frain as Ambassador Sarek of the CBS All Access series STAR TREK: DISCOVERY. Photo Cr: Jan Thijs/CBS

But she’s the one who brought Georgiou to this universe and pushed political asylum for her to the admiral. So much of Star Trek: Discovery wraps itselt around Burnham at this point.

Cornwell’s arrival was a welcome addition to the episode and she took over the operation of the Discovery and okayed the plan to not only try to replenish the Mycellial spore network, but pushed for the plan to allow Georgiou to assume the captain’s chair aboard Discovery again (Nice cover story, too. Wonder if Burnham and Saru will be able to function under this new Captain Georgiou?). And let’s face it, any scene L’Rell is in is delightful. There’s more to this Klingon female than often meets the eye.

Indeed, the ladies played a huge role in this episode and it was a welcome arc in the show’s penultimate episode. Star Trek: Discovery has done a good job of taking up the mantel of equality among differing races and sexes. This episode would have made Gene Roddenberry very proud. The work of Yeoh, Mary Wiseman, Mary Chieffo, Sonequa Martin-Green, and Jayne Brook have delivered characters that I found interesting and exhibited strength, intelligence, growth and leadership throughout the run of season 1. Great work by these talented ladies.

So here we are at the finish line of Star Trek: Discovery’s maiden TV voyage. Klingons are rampaging through the galaxy, defeating the Federation at every turn, and the Discovery has popped back into its correct universe. Emperor Georgiou is now in the captain’s chiar looking to unleash her particular brand of war-making skills on the Klingon home world, and Stamets and Tilly are attempting to re-grown the Mycellial spores to once again be able to “jump” into the caverns of Kronos. A lot to be decided in next week’s season finale, eh? 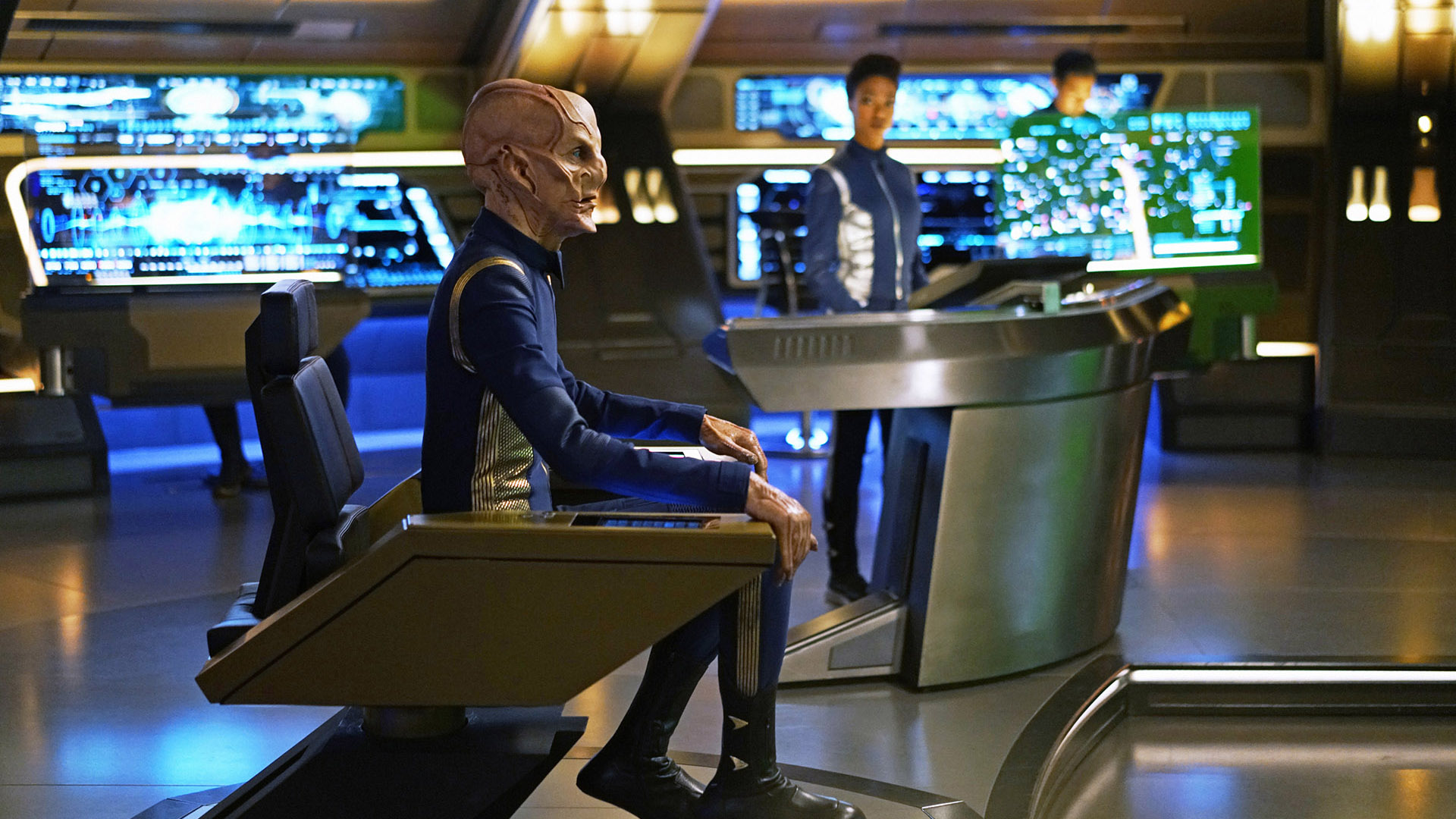 “The War Without, the War Within” — Episode 114 — Pictured: Doug Jones as Saru of the CBS All Access series STAR TREK: DISCOVERY. Photo Cr: Russ Martin/CBS

There were some other interesting tidbits that popped up in this episode, including some more Sarak, a character I like very much through James Frain’s work.

I thought it was somewhat ominous that Burnham told Tilly that saying “goodbye” to her father felt different this time, Now, we know that Sarak lives for many more years within the Star Trek realm, but it seemed that Burnham’s words were a portent of something interesting yet to come.

And then there was the Ash Tyler-Michael Burnham reunion, a shaky, awkward few minutes that seemed to settle nothing except that things were unsettled between them. I can’t help but feel some sense of sorrow for Tyler, who was thrust into a role he had no hand in agreeing to.

L’Rell and Voq had planned to use him as a spy within the Federation, but as he noted, his burgeoning love for Burnham helped short-circuit the plan. Still, I don’t know how these two come back from all that’s transpired, particularly with all the conflict about other issues raging inside each. Trust was broken, a relationship was broken, and in some ways, two people were broken by all that had transpired. 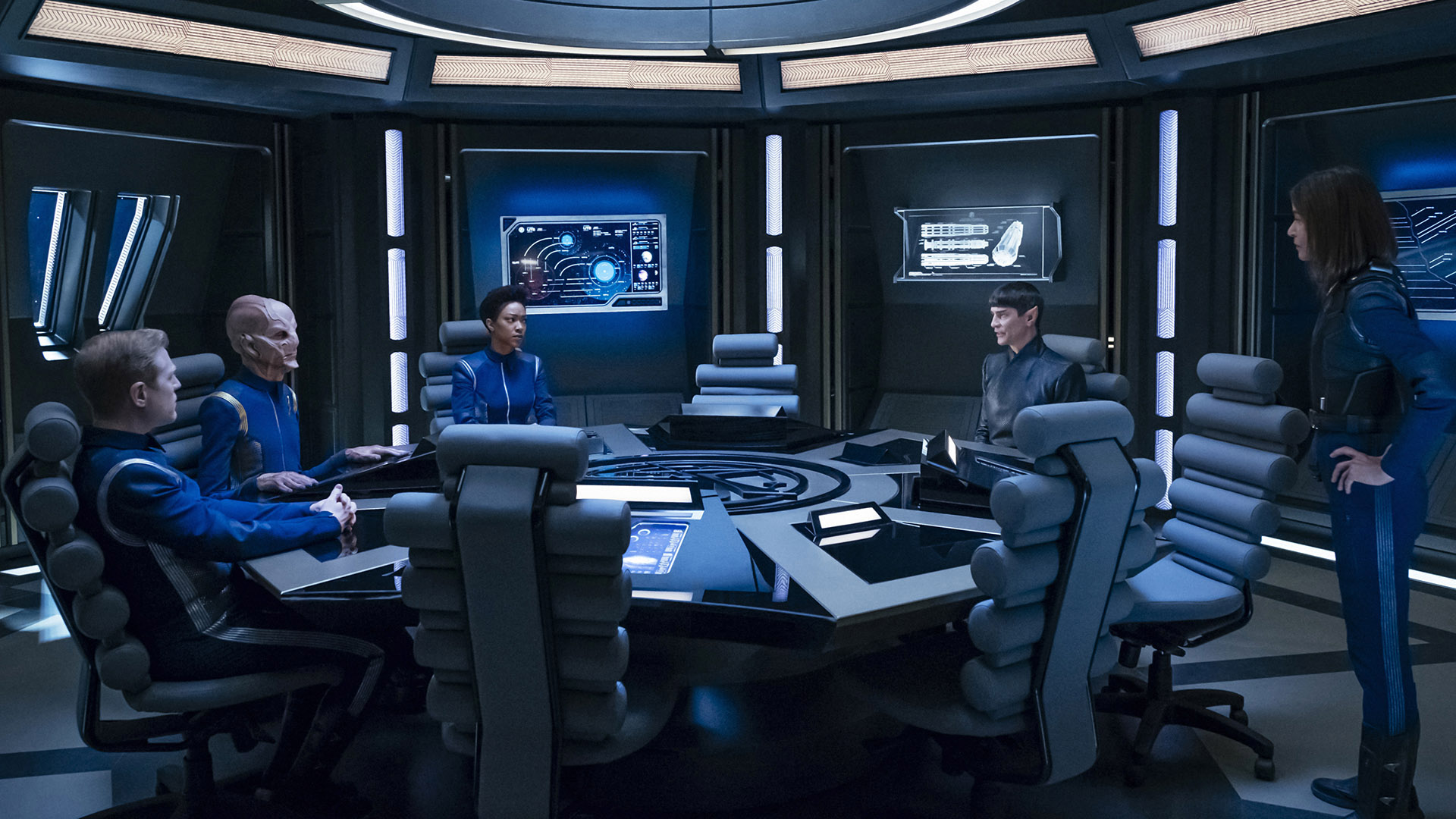 And where does L’Rell fit now that Ash is apparently Ash once again? Is Voq’s essence still floating around out there somewhere? Part of L’Rell, perhaps?Full disclosure, I think I’ve got a bit of a Klingon crush of L’Rell. Whew, that was liberating to finally admit.

So, it’s safe to assume that the spore experiment works, Stamets resumes his Mycellial network travels and the Discovery finds itself in one of Kronos’ many caverns. From there, what may we see?

My heart wants to believe Georgiou, despite her ruthless nature, will channel the good parts of the character before the end and make a daring and deadly decision for the betterment of Burnham and the Federation.

But who knows at this point. Expect a twist and turn of some kind as the first season of Star Trek: Discovery wraps up.