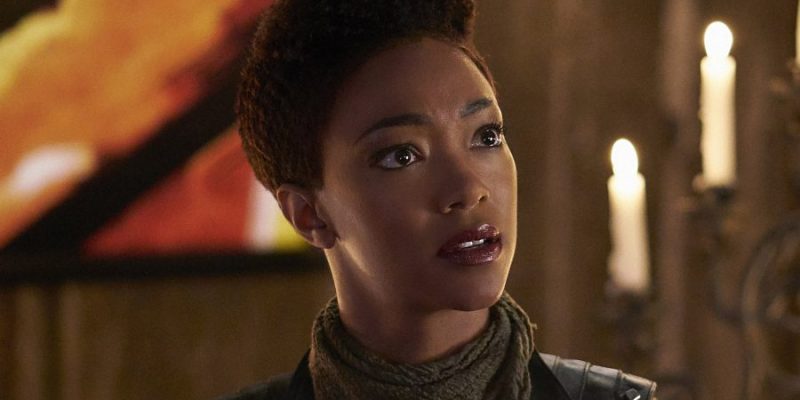 The season finale for the first season of Star Trek: Discovery delivered surprises and a satisfying conclusion as things got very interesting for the Discovery crew on Kronos. “Will You Take My Hand” offered a little of everything, including a fun surprise at the end.

Putting together a successful Mycellial jump into the caverns of Kronos proved to be an impressive opening act for the finale. From there, things raced uphill very nicely. It was hard not to be disappointed when the episode – and season — finally came to a close. Still, plenty to ponder as we anxiously await season 2, right? Like having the Enterprise arrive in the final few frames. Wow, where did that come from? And, oh the possibilities, eh?

In the end, Michael Burnham’s season-long quest to crystalize what having principles in a Federation universe truly means, came to a successful conclusion, Burnham’s innovative solution to Georgiou’s treacherous, yet inevitable betrayal, not only stopped a planet-wide apocalypse on the Klingon home world, but ended a war she had started.

All this while elevating L’Rell to a position that could finally unite the 24 families of the Klingon Empire. Not a bad episode’s work for Burnham. Throw in recalibrating the Federation’s moral compass and you have quite the run. 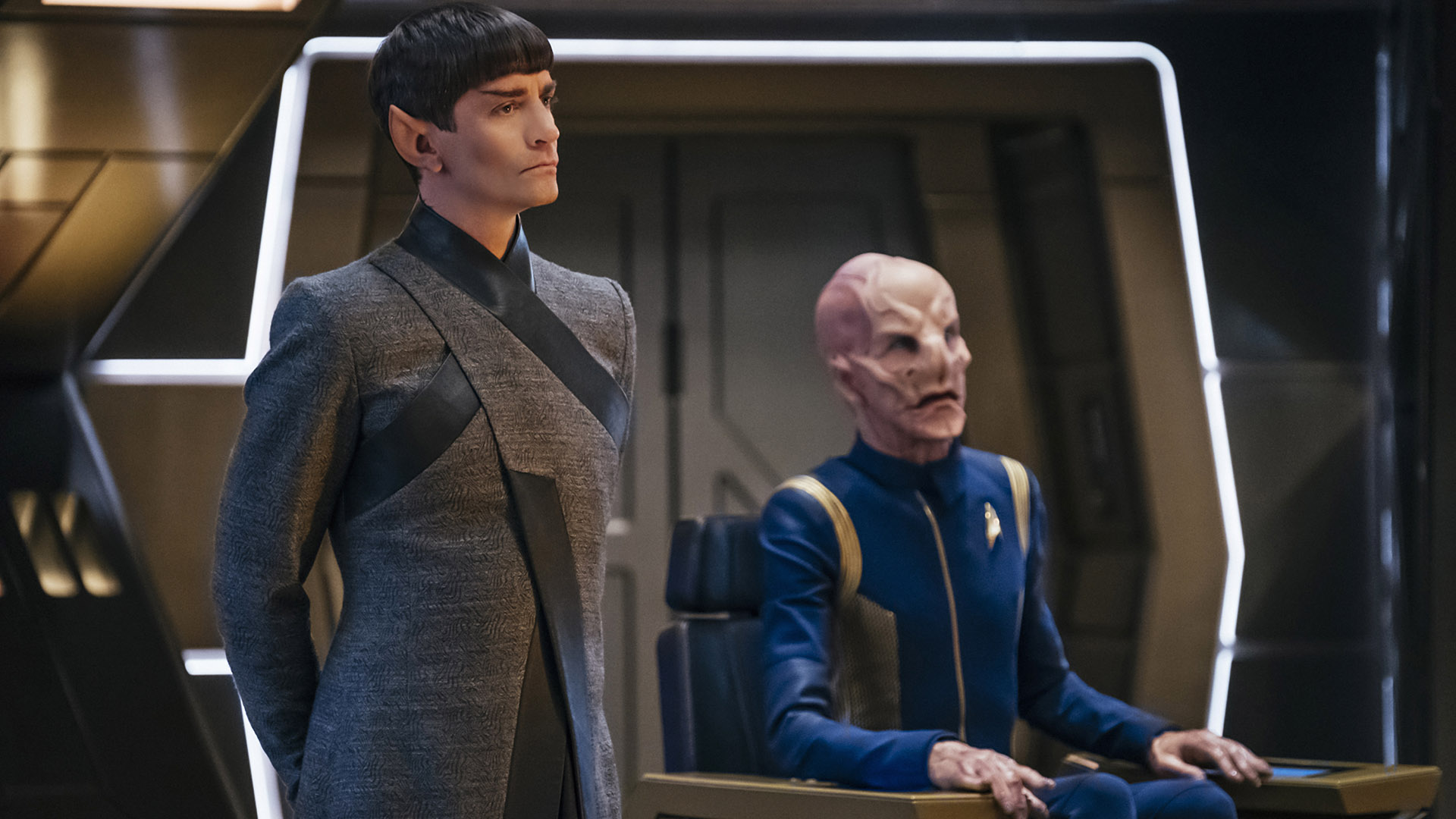 Not a simple trick, to be sure, but Burnham stood by her principles in standing up to the duplicity of the Federation in Georgiou’s plan, and was supported by a bridge crew that so obviously agree with her view of what the Federation should and can be. From Saru on down, the crew’s admiration and respect for Burnham’s stand was inspiring.

That bridge scene, with Saru and the other officers standing behind her in the face of Admiral Cornwell, was that “moment” when the struggles Burnham had endured since the opening episode coalesced into a moment that was righteous and true. I think she was looking for those ingredients to solidify themselves in her life again. It was a Star Trek-type moment that was raw and well done.

I’ve had a lot of feedback about the work of Sonequa Martin-Green in the role of Burnham and I think she has delivered a very nice performance in season 1. It’s no strawberry festival to step into the Star Trek realm as a lead character — the shadows are pretty tall — but she has developed Burnham nicely (with the writers) as the season has gone along. I’ve enjoyed her turn at Michael Burnham more and more as the season progressed. She was powerful and even dynamic in the finale. 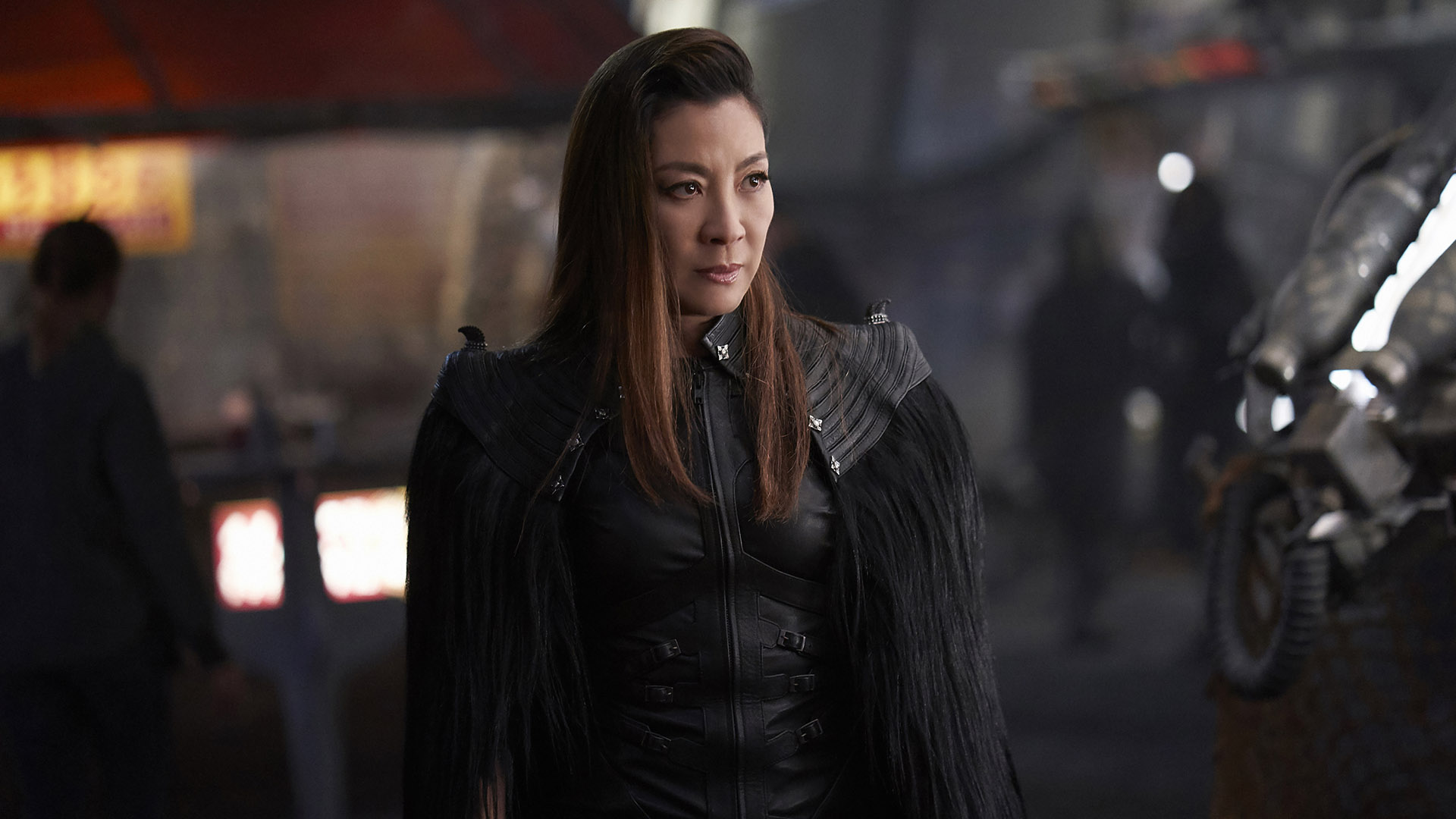 I said it before and I’ll say it again, having Michelle Yeoh back as the mirror universe Philippa Georgiou has been a wonderful spark to a Star Trek: Discovery that really had found its groove. Her return added an extra “oomph” to a show that was hitting on all cylinders. Watching her ruthless audacity as the fake Captain Georgiou was a treat. It was a fun little struggle to see her try to fit into this new universe — and fail at times.

Sometimes, the domineering and merciless emperor just couldn’t be contained, and watching the crew react was priceless. Her intrerogation of L’Rell via hand-to-hand combat was pretty darn good. Yeoh got to brush off those martial arts skills a bit, which I enjoyed. Her interaction with Tilly was pretty priceless as well. Again, Mary Wiseman’s Tilly has been a joy. Wonder what it was like to work that scene with Michelle Yeoh?

The fact that she misled the landing party on what the plan was on Kronos, with the Federation’s approval mind you, should have surprised no one. In the end, the spark of decency (not killing Burnham) and self-preservation took the plan in another direction.

So, with freedom in hand, one can only wonder when or if we’ll see Georgiou down the road. As Burnham said, “Be good.” Well, Georgiou is a lot of things, a lot of useful things in a universe with so much innocent potential, but I”m not sure “good” is necessarily one of them.

Some time ago I’d lauded the work of Shazad Latif in the role of Ash Tyler and Voq. I always thought it had to be tough, even for an actor, to swing between the characters as seamlessly as he does. I was not enamored of the Tyler character initially, perhaps because I (like many) sensed there was more to this POW than met the eye. 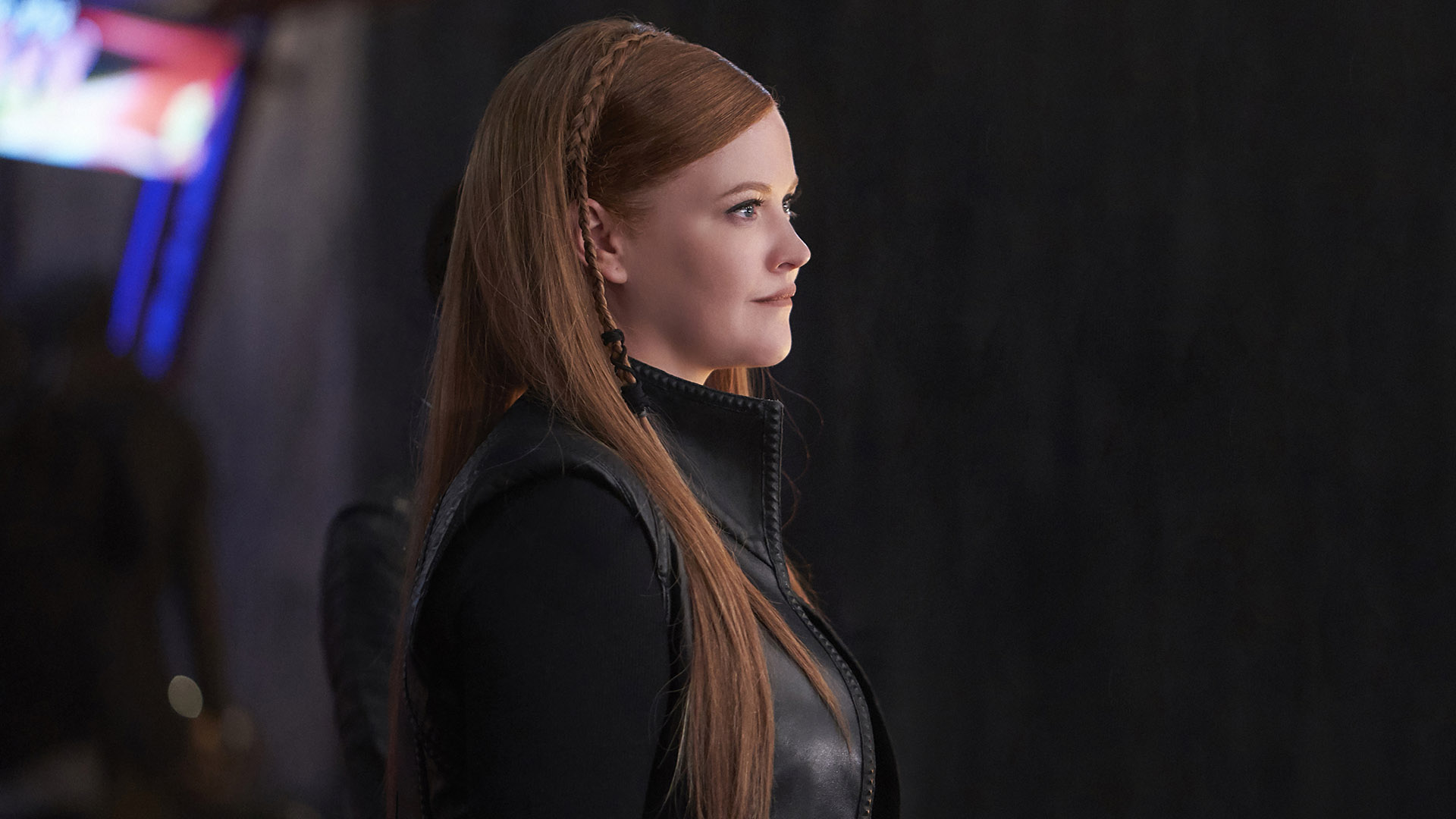 But time and his talent in moving from Tyler to Voq and back again so quickly and with the proper “vibe” of each continued to impress me. By the final few episodes, despite Ash’s fall from grace, I found myself delighted when he was in a scene.

I think one of my favorite story arcs with Ash/Voq occurred in the finale when, in the Orion encampment on Kronos, he channeled his inner Voq essence in the gambling hall. Just tossing out Klingon trash talk like a boss, laughing and letting that scary part of Voq out of the bag a bit. I enjoyed it, even as it made Burnham uneasy. And was that Clint Howard getting Tilly stoned? Talk about golden moment.

I don’t know, I just enjoy watching Klingons at their drinking, gaming and carrying on. Tyler’s decision to follow L’Rell as she attempts to unite the houses (well, blackmails them, really) didn’t come as a surprise to me. In the end, Voq and Ash ended up having many similarities, including the search for a place they could fit in and belong. I suspect we see Ash down the road, too. And I’ll be glad of it.

So there you have it, the season finale of Star Trek: Discovery’s maiden TV voyage. In addition to seeing the show grow and develop this season, it has been interesting to hear and read the many and varied reactions, reviews and thoughts on the new entry in the Star Trek viewing realm. There is simply no way around the fact that Star Trek fandom is about as passionate and committed as any. The various TV shows and movies are benchmarks for people and they have meaning to those who have watched and enjoyed (or not enjoyed). 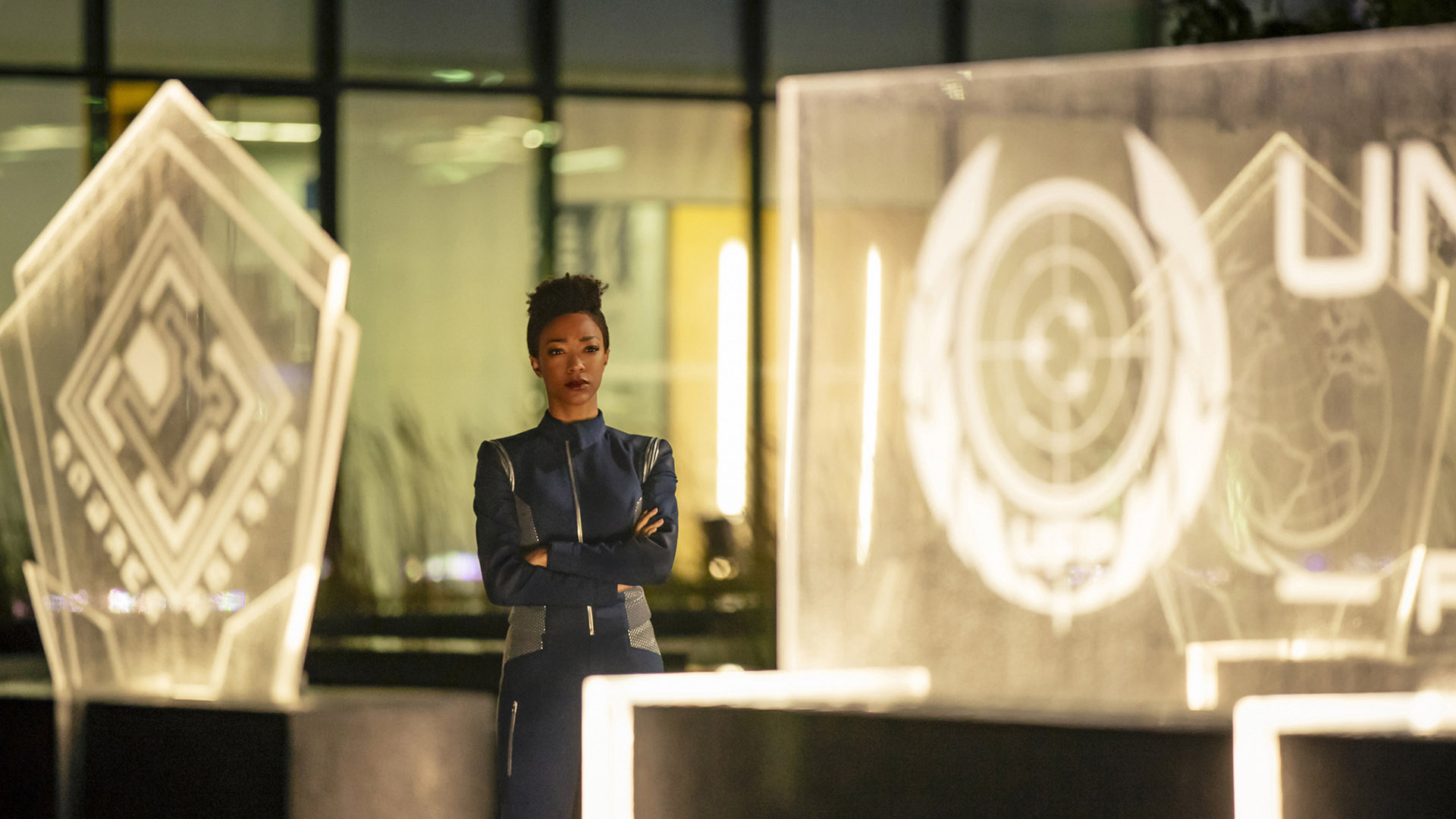 So a new child being brought into the Star Trek world is certainly not starting from neutral ground. The expectations are immense and the critiques are passionate and heartfelt — good and bad. It’s my considered opinion that Star Trek: Discovery rose to the challenge on both the writing and acting fronts, and certainly surpassed the visual aesthetic we’ve been used to seeing on other TV Star Treks. It’s clear that this iteration of Star Trek was funded to a level that made it something a little special.

For my money, I don’t worry about the show looking so much more modern than TOS, even though it is supposed to have happened 10 years before TOS. Let’s face it, times change and so does technology, so trying to “dumb it down” technologically makes no sense. And for those who struggle with the Klingons not looking like traditional Klingons — there is no race in the Star Trek realm that has been the subject of as much “creative alteration” as the Klingons. Think of it as kind of a running joke and let it go.

When I watch Star Trek: Discovery, my overriding thoughts are simply this — do I enjoy the story, the characters and the overall vibe of the show? Am I entertained by it? The work of Jason Isaacs, Michelle Yeoh, Sonequa Martin-Green, Mary Wiseman, Mary Chieffo, Doug Jones, Shazad Latif, Anthony Rapp, Wilson Cruz, Jayne Brook and their fellow actors left me with a resounding feeling of “yes, I enjoyed this show.” And that’s all we can ask.

What came before or what is “canon” has no impact on my enjoyment of this show in this time and place. I view it completely as its own thing, and I think that’s a rewarding way to view it. The first season of Star Trek: Discovery was a promising and joyful start. Now, the devil is in the details as we look forward to season 2. What have you got for us Star Trek: Discovery? What will we explore together? And why did the Enterprise with Captain Pike show up at the end? Stop teasing us.