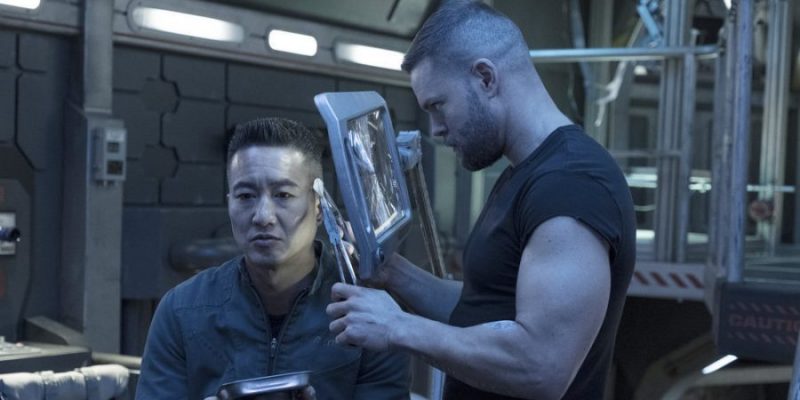 The Expanse: Staring ‘Assured Destruction’ Square In The Face – Review

Let’s just say that “The Expanse” is 3-for-3 thus far in the new season and move along. Loved this episode. The show once again delivered a compelling and interesting episode that saw the Secretary-General ultimately up the ante on the war with Mars — to devastating consequences on earth’s soil. The finish of the episode was a somber reminder of the price of war and that the answer as to how many lives are too many during such a conflict is often out of the hands of those in control – or fluctuate wildly based on individual decisions.

For me, “Assured Destruction” asked some pretty interesting questions of some of our characters and also threw some new faces together in what promises to be interesting storylines moving forward.

But first, a quick reflection on something I mentioned previously about “The Expanse” and its ability to deliver nuanced light moments in the midst of stress and strife. Amos delivered one of those early on when Bobbie and Alex were about to go nose-to-nose aboard the Roci. Holden walks in and asks what’s going on. Amos, calm as you please, says “The Martians are bonding.”

Four quick words, but it was one of those little moments that delivers a quick little smile as the show heads off to more serious matters. It’s subtle, but a nice bit of writing paired with actors who continually pull it off. Wes Chatham, you made me chuckle and I appreciated it. Well played, sir. (Oh, the footwear moment with Chrisjen was another beauty. Pumps, indeed).

I have to admit that for a brief moment, just a wonderfully brief moment, I thought Jules-Pierre Mao was going to do the right thing with those kids. Even with Dr. Strickland demonstrating once again his total absence of feelings and moral compass regarding his creation of hybrid protomolecule warriors via the children, I thought Mao had seen the light as he observed the little ones play — and found solace in Mei. 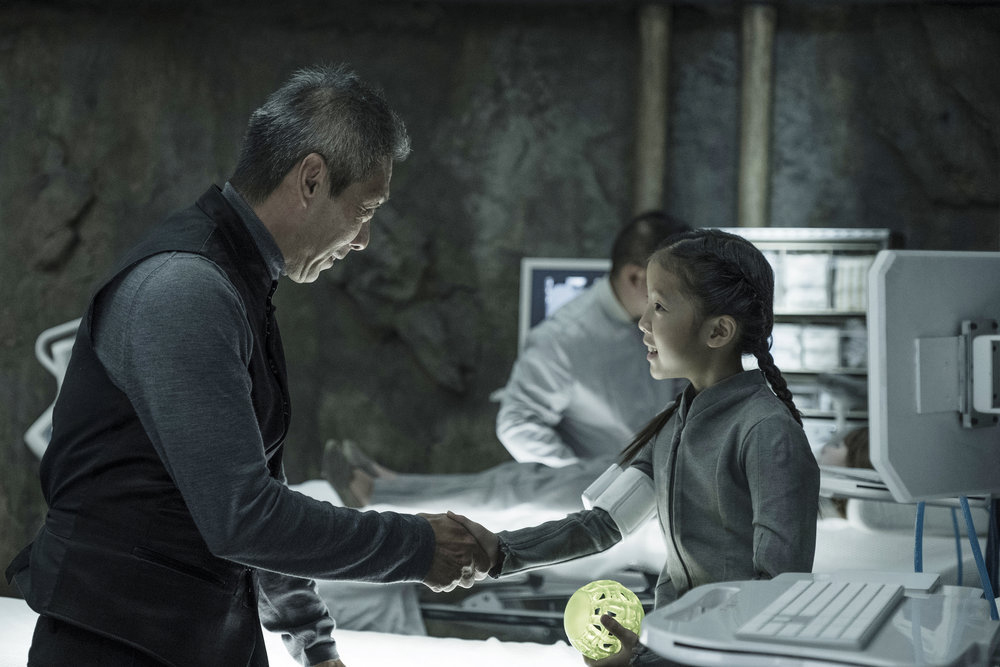 Unfortunately, I’m not buying it. I’d like to think he’s seen the light, but we all know Dr. Strickland isn’t going to fade away into this goodnight without some sort of response to Mao’s demand to shut things down. Let’s face it, Strickland looked positively distraught at the thought of shuttering the protomolecule hybrid program. Yes, Mei has pulled at Mao’s heartstrings a bit, but the whole thing feels like a false trail designed to touch us emotionally before reminding us that these are not good people. And besides, the blue, glowing kid offers some tantalizing potential, right?

With Errinwright pushing and Dr. Strickland (whose eyes seem to glaze over with joy when talking about the project) conniving in his icy, emotionless way, it feels like only a matter of time before Mao realizes he’s bereft of morals, too. So, I don’t buy that “shut it down” directive. Something’s going to turn the tide of Mao’s sudden softening. It struck me as “The Expanse” writers kind of screwing with us. You rogues, you.

So, here we go with some new pairings that should be very interesting. In one corner we have Chrisjen Avasarala and Naomi Nagata about to “throw down” over a sample of the protomolecule getting into Earth’s hands. Should be a titanic battle with small victories on both sides. In another corner we have Anna Volovodov and Sadavir Errinwright, who look like they are gonna square off very soon. It’s clear she sees behind his oily-smooth veneer, so the battle for the secretary-general’s soul is officially underway. Round 1 to Errinwright.

I’d also toss in Cotyar vs. whoever screws with him. As we saw in this episode, he’s a pretty cool customer who can do some very bad things. He knew Theo couldn’t resist the questioning/torture to come and killed him before they were rescued. It was cold and calculated, but in his face you could see he meant it when he whispered he was “sorry” as Theo died. That’s not a man who is afraid to go glove-to-glove in the ring of intrigue. It’s also a man who feels far more than he lets on. Nick Tarabay is simply terrific.

Episode 3 was a nice continuation of the previous episode, but also tossed us in some new directions that should yield some sci-fi gold down the road. 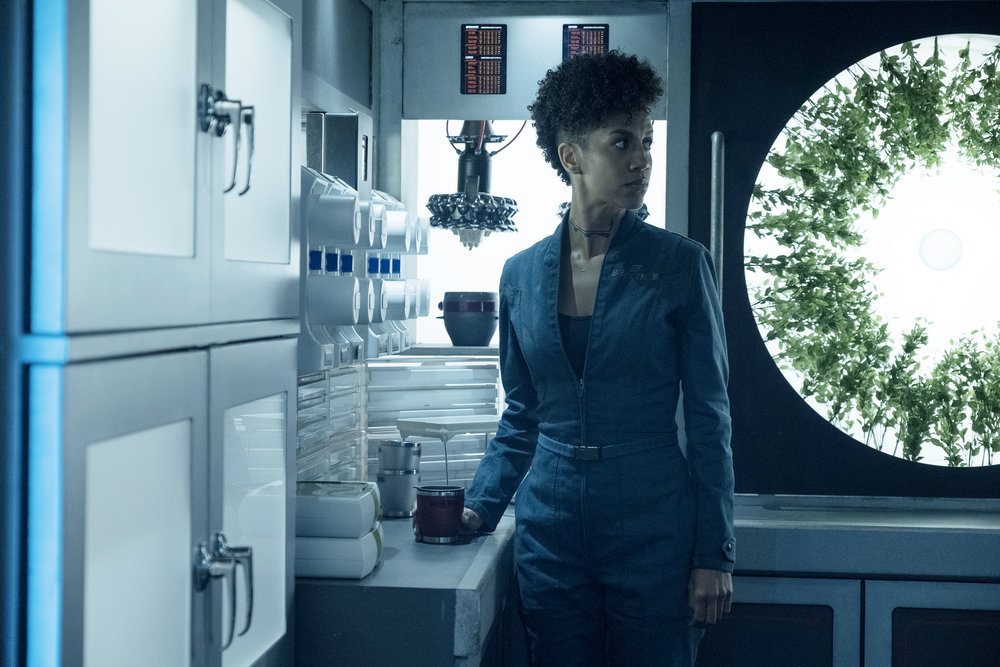 Another thing that stood out to me in Episode 3, which had a lot to like from my viewpoint, was the way Errinwright so readily manipulated Secretary General Sorrento-Gilles into attacking the Martian missile platforms. It was a great example of Gilles not trusting his instincts and allowing Errinwright to turn him from a course I think he sensed was the right one. Gilles offered his reasons why he didn’t want to attack in the initial meetings and they made absolute sense. But Errinwright was able to play the “legacy” card privately, something Gilles obviously wants to chase. I want the Secretary-General to be stronger than that. He shows flashes, then is easily manipulated. It’s frustrating.

For all the feelings of loathing I have for Errinwright, he’s the kind of bright, intuitive, scheming weasel that makes a show like this so compelling. It also offers a disturbing insight into how hubris and ego so often blind leaders to their better angels in such situations. Legacy hunting can be a dangerous game, particularly when a guy like Errinwright, whose agenda is clear to the viewer, is such an adept manipulator.

Shawn Doyle brings just the right balance of confidence and malevolent intent to the Errinwright character. He’s unsettling on some levels, which I think makes him more interesting, particularly when he so adroitly maneuvers the secretary-general into a course of action that obviously ran counter to his initial instincts. Bravo, Errinwright. You’re a rotter.

And we saw the results – millions dead on earth as one of the Martian missiles got through the initial attack and the planetary defenses. Any hope of going back is now gone, which is what Errinwright wanted all along. As noted above, I look forward to his clashes with Anna. It will be interesting to see what Anna does? Will she be so appalled she takes off or will she ultimately decide that the secretary-general has good qualities within him and that he can’t be allowed to remain a puppet for a man like Errinwright? I’m hoping the latter, but I can tell the deaths on Earth shook her deeply. Hopefully her disdain for Errinwright’s snake-oil salesman smoothness will help her dig her heels in against him.

I’m not going to get into everything that went on in Episode 3 because you saw it, so you know. 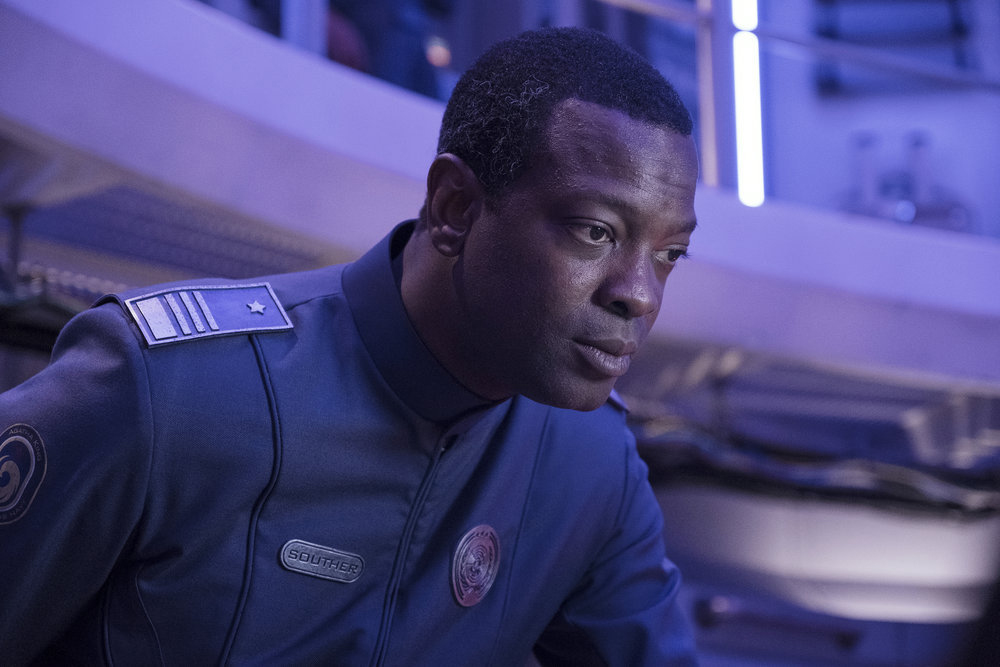 However, I am starting to feel some sadness for Naomi. Everyone aboard ship knows and has essentially admitted that her choice of giving the protomolecule to Fred Johnson was a betrayal of epic proportions. Even Amos, her staunchest supporter, has essentially turned away from her. I suppose betrayal can go both ways, but I’m starting to feel for her some. (Note: The broken coffee maker is a nice running gag.)

In that vein, I think it’s a good thing she will have Avasarala as an antagonist on this trip to IO. It will give her something to focus on (you know, keeping an eye on Chrisjen) besides the enmity of her crewmates. Given that, I was pleased to see Alex acknowledge the situation and let her know that he respected her commitment to The Belt, and that he wished he had that kind of moxie himself. It was a nice moment in the mess hall, one that Alex didn’t have to make but I’m sure it meant a lot of Naomi.

Alex has proven to be an interesting study this season, hasn’t he? Some of the most poignant moments we’ve had so far have been through his eyes. His message to his wife and child, the return message that he’s not wanted by them anymore, his moment of forgiveness with Naomi. It’s fun to see Cas Anvar get to take Alex in some new directions emotionally already in this season. We see an Alex with some more layers and that’s been intriguing. Hopefully, his gesture with Naomi will start a healing process within the rest of the ship’s crew. 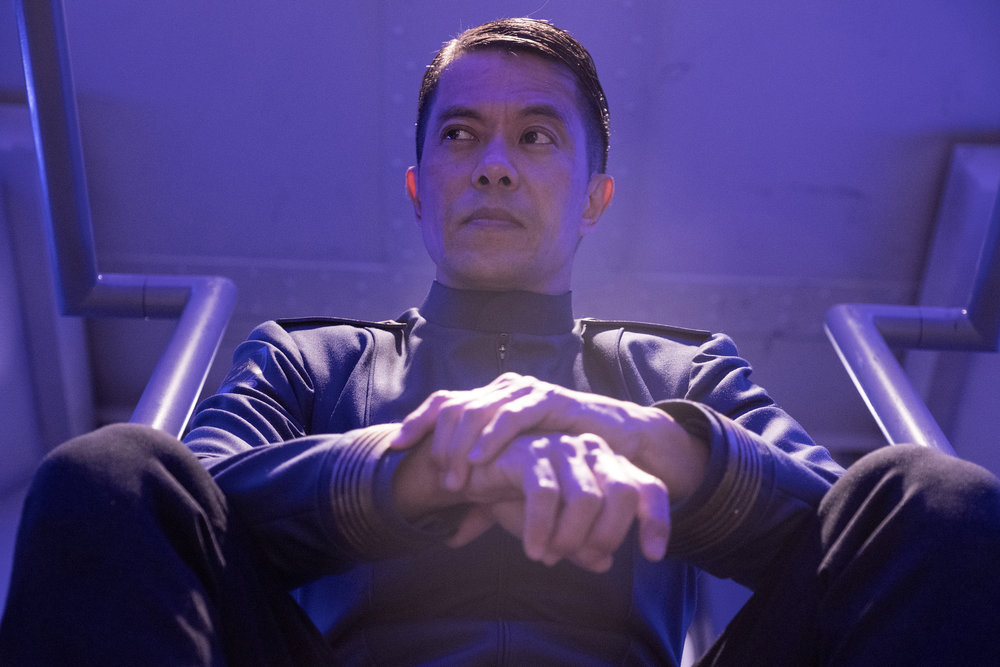 I probably should have noted the Admiral Souther vs. Admiral Nguyen battle about to be waged. Obvoiusly, Nguyen is in Errinwright’s pocket and now we can be fairly certain Souther is well aware of that, too. So, let’s all get ready for the Cotyar escape plan and what that will entail. Until then, the battle of wits between Nguyen and Souther has begun. It ends when one makes a decision and they find out who wins and who is dead (sorry, not drinking from the poison goblet). It’s always a little tough to see good men put in bad situations and it looks like, after he was relieved of command by Admiral Nguyen, that Admiral Souther is in that predicament.

How many of his crew can he count on when the time comes to make a move will be interesting to see. Betrayal for professional gain could very well be a card played when this all comes to a head, so that’s just another little layer to this showdown that may prove interesting. So much of The Expanse is about relationships and how they develop and/or evolve.

As noted in my opening, I feel that “The Expanse” has gone 3-for-3 in terms of quality episodes. Each has been interesting, thought-provoking in terms of what the storylines are doing, and delivered some very good moments. Things feel tense with a heightened sense of urgency already, which does nothing but make me yearn for the next episode as soon as the previous one is finished. Personally, I think that’s a good sign. Hope you’re enjoying it as well.