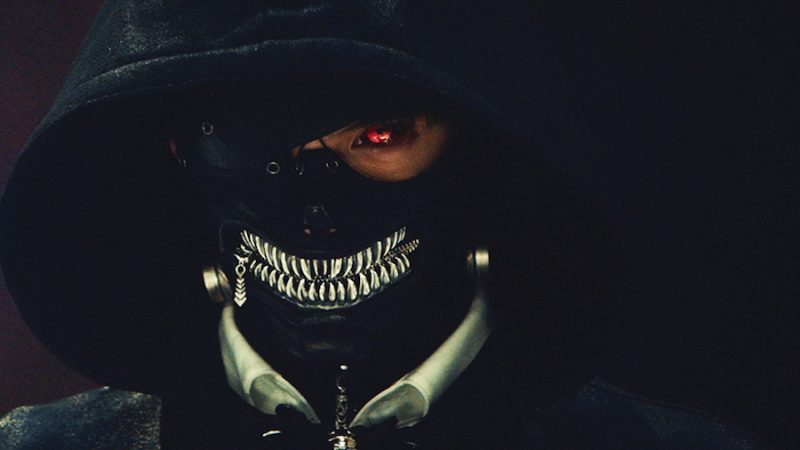 When news first broke of a Tokyo Ghoul live action movie, fans around the world were concerned. They had good reason to be. Past history with live action adaptations of anime or manga titles has been less than stellar. Tokyo Ghoul was also a rather graphic title to move to live action as well. I too was a bit concerned until I saw the early trailers for the film. Check out our review below and what we thought of the dub for the film.

Riddled with gripping fight scenes and tasteful gore, this adaptation of Tokyo Ghoul brings the popular manga series to life like never before.

Buried in books and a quiet life, Ken Kaneki is all but dead to the world in an age where flesh-eating ghouls live among us. But when his only chance for survival is an organ donation that turns him into a ghoul-human hybrid, he finds sanctuary at Anteiku—a café run by the people he once considered monsters. Targeted by anti-ghoul forces, this safe house is up against a hunger more sickening than their own. When their most innocent members are threatened by humanity’s taste for vengeance, Kaneki will risk life and limb to protect the very world that changed his own.

After screening the film ahead of its October 16-22nd run in select theaters, I can tell you this was a superb adaptation. From the casting and story, to the visual effects, director Kentarô Hagiwara, has captured Tokyo Ghoul down to the gruesome details.

Let’s start with the story. The film covers the very start of the series up through the point where Kaneki and Amon have their first fight. For those who have read the manga or seen the anime, all of these scenes are familiar. In fact, several of them are rather difficult to watch on screen. The one that comes to mind the most for me is when Kaneki begins to taste the blood on Hide’s face. As cringe worthy as the scene was to watch, it was cringe worthy in the best way possible. It is funny how when we watch Tokyo Ghoul in anime form or read the manga that we are not as turned away from the blood and guts. However, the moment its on screen in live action format, it elevates the gore to another level.

One of the risky moves with a story like this is how you structure the film to be stand alone while not destroying the story. Throughout this part of the story there were tons of mentions about future events and characters you would say later in the manga and anime. Hagiwara managed to keep those bits out while keeping the story intact. This allowed people who had perhaps not read the manga or seen the anime to watch the movie and enjoy a nicely wrapped up ending. They didn’t left with lose ends for future films. But at the same time, the director can continue the films if he wanted and still be on track.

To read our full review, you can catch it here.

I screened the subbed version of the film. Once the blu-ray release came out and went ahead and watched the english dub of the film. It turned out about what you would expect for a dub of a live action movie. I liked the sub much better. Tokyo Ghoul was one of the anime where I felt the dub was not casted quite right for the characters, mainly Kaneki. Granted, it was nice to hear the english cast from the anime return for the film. Normally when it comes to anime I tend to lean towards dub over sub as a personal preference. However, with live action its a very different story. The actors did fine with their voices. The issue for me was the mouth movement was too distracting for me. Plus having already heard the original voices in Japanese, I preferred their voices.

Still, the quality of the dub that we have come to expect from Funimation is still there.

In terms of features the film comes in the Funimation Blu-ray/DVD combo pack with a digital HD version from Ultra Violet. The film comes with the original Japanese 5.1 audio with English subtitles but also a dubbed version of the track. Extras include Anime Expo 2017 cast and crew panel discussing the film, and the original Japanese movie trailer.