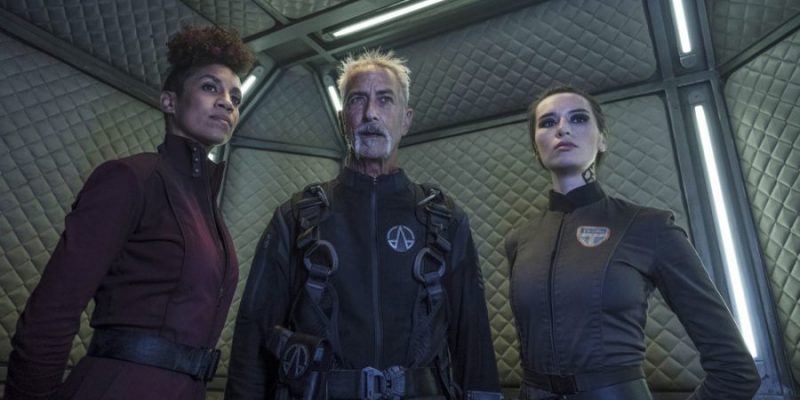 Last week I mentioned the season finale feel of episode 306 of The Expanse, and judging by what we saw in Episode 307, that sentiment was fairly accurate. We jumped ahead some months after the events of last week’s episode to find that not only had Saddavir Errinwright been jailed, the secretary-general had resigned, the protomolecule jellyfish from Venus has now turned into something termed “The Ring,” and Naomi Nagata had joined Drummer as they navigated the ship-formerly-known-as-Navou to its next mission for The Belt. Oh, and Naomi has apparently added a purple tint to her hair. I liked it.

Additionally,  a documentary team was filming on the Rocinante, Bobbie Draper has been reinstated with the Martiain Marines, and, oh yeah, Amos may have been a crime lord in Baltimore? Say what? That was a quick and interesting possible revelation. Journalists, they’re a pesky bunch with all their research.

I’m sure I’m missing some tidbits, but EP 307, “Delta-V” certainly turned the corner and sent us careening into new directions for the latter half of The Expanse’s third season. New storylines are on the table and some new faces have dropped in to take things in seductively new directions. It’s juicy stuff and something that makes the show even more alluring heading down the homestretch. Talk about changing gears. 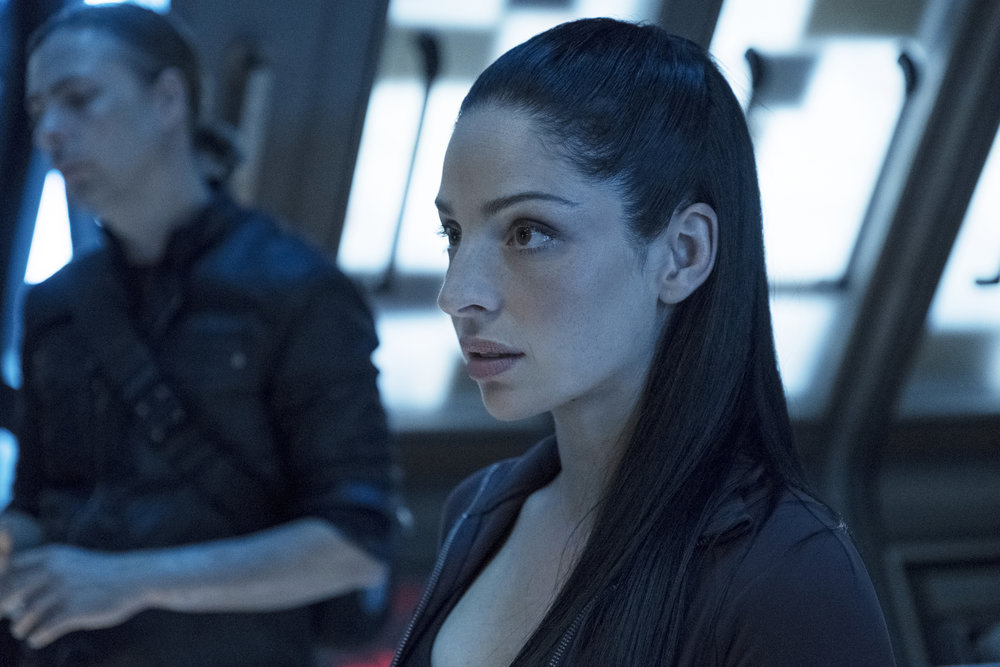 For my money, seeing that Naomi had left the Rocinante was a little sad, but the chance to pair her with Drummer aboard the newly-christened Behemoth (formerly the Navou) as the ship’s chief engineer has so many intriguing possibilities that I’m a little excited to see what may develop.

One of the important components of The Expanse is the wealth of strong female characters with major play in the overall story. As two alphas leading the way aboard the Behemoth, the work of Dominique Tipper and Cara Gee should get plenty of run moving forward, particularly with Klaes Ashford showing up, courtesy of Anderson Dawes. Ashford will be Drummond’s first officer, but it’s clear that servitude as an underling is not his forte.

There’s obviously more going on there than simply serving The Belt under Drummond. It’s interesting to watch Ashford during his scenes as he’s a man who notices everything and isn’t delicate about letting you know his motives aren’t pure. I think he kind of enjoys keeping the people around him off-guard. You can’t trust him, but you can’t take your eyes off him, either. Actor David Straitham will be an excellent foil for Drummond and Naomi moving forward. Nice to see Diogo make a return to the fray as well.

An aspect of this whole thing that stood out to me was Ashford’s interference when Drummond was about to “space” the drug supplier. His argument about rule of law and The Belt needing to get its own house in order so it can take its seat at the table with Mars and Earth as an equal was a good one. Oh, I don’t for a second buy the guy’s shtick completely, but the points he made were legitimate and something worth thinking on. 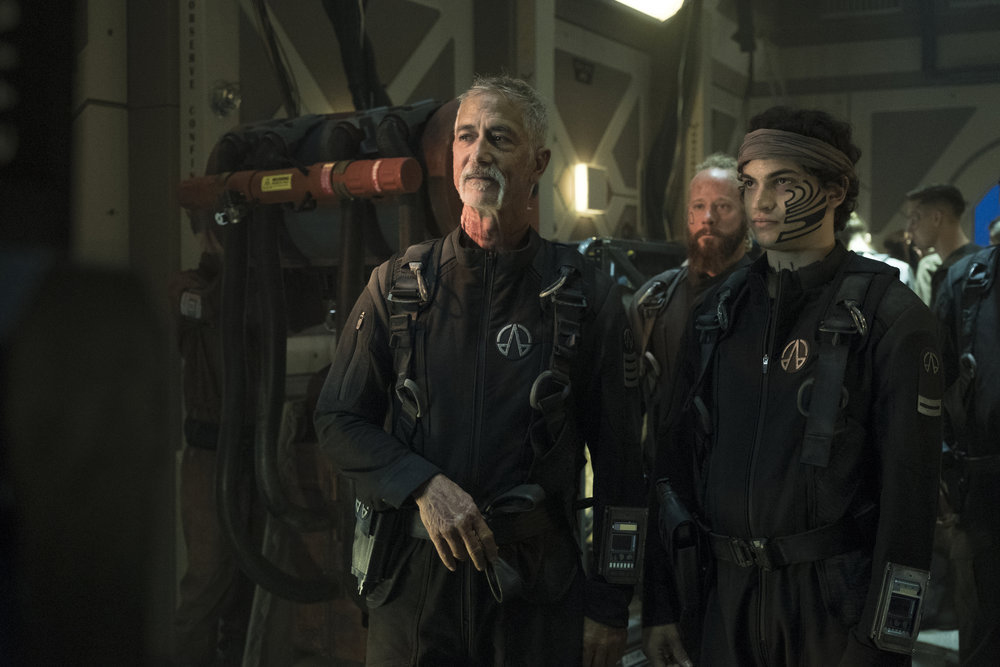 Yes Drummond, “that’s not our way” may have made sense before, but things are changing. Again, the long view is something The Belt will need to keep in mind moving forward, and something that’s going to be interesting to see as it’s fleshed out. Interesting that Naomi understood the points Ashford was making. It’s a cool head and keen mind that can see beyond the obvious distrust to the valid points that are there. Naomi saw it, but Drummond is still a ways behind.

Dynamics, dynamics, dynamics — it’s all about the dynamics of people in close quarters. Anna Hopkins has arrived as journalist Monica Stewart and quickly demonstrated a penchant for trying to get under the skin of the crew. She fluctuates between subtle passive-aggressive and overt needling as she looks for “hooks” for the documentary she’s making. So far, both Holden and Amos have not taken the bait, which only makes the inevitable crack in someone’s emotional armor the more anticipated.

She’s an interesting antagonist who obviously is willing to use her womanly charms to further the story. Amos had an interesting afternoon with turning her down and then turning down her male assistant. While that was fun, we also learned that there was a crime boss in Baltimore by the name of Amos Burton. What? When? Where? You knew Amos was a layered character with more secrets than an alley cat, but could it be true.

Could Amos have used the stars to escape a life he simply didn’t want to lead? I love how that quickly came out and quickly shut down by Amos. We got just enough to start to wonder. Skillfully done. But I suspect we will revisit this little gem later on. File that little scene away for later on. 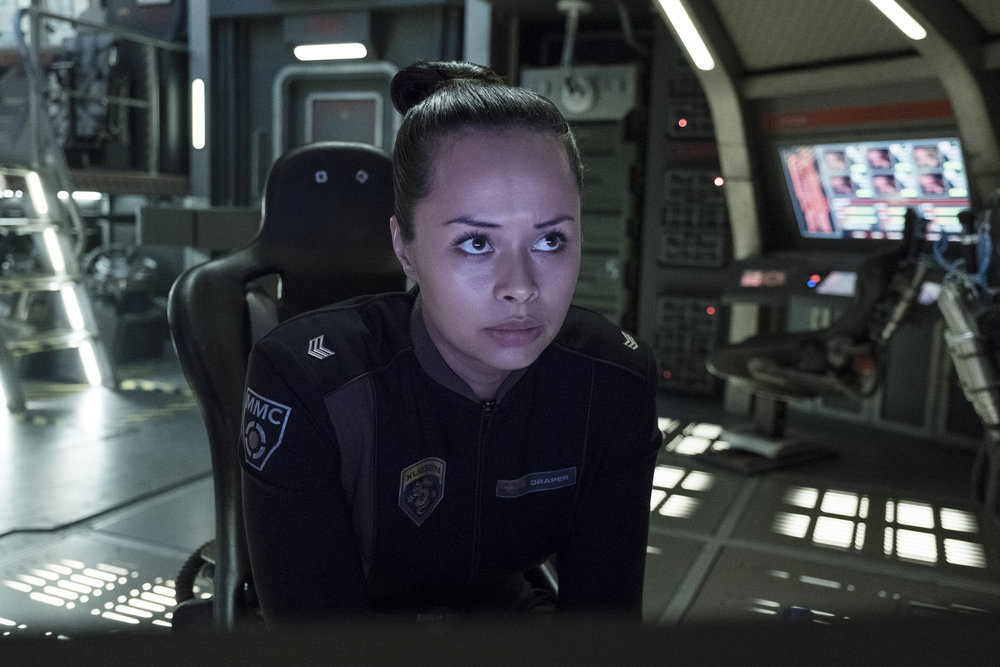 “Delta-V” is a great example of what keeps The Expanse so fresh and entertaining. Essentially, the showrunners and writers plopped us down in the middle of new stories with our beloved cast. They did it smoothly and with an ease and confidence that delivers a tremendous viewing experience. Within that, they toss in some new faces and new situations that shove us in new directions. No muss, no fuss, just a time jump and we’re back into the storytelling fray.

The writing on The Expanse is not only creative, but keeps us engaged, even when the storyline makes a big switch — as it did across the board in Ep. 307. That ease of changing story directions and adding new elements is a sign of a show that’s hitting on all cylinders. That’s “The Expanse” in a nutshell.

So what’s up with The Ring? The protomolecule certainly has some tricks up its collective “sleeve” and what left Venus is certainly not what’s floating around space, is it? The Work that was referenced by poor Katoa, is it done? Still in progress?

There’s so many questions yet to be answered about the protomolecule. It would be easy to take a deep breath and relax after the events of Ep. 306, but after watching our lovesick speed racer attempt to go through the ring, then seeing him splattered all over his ship with the “momentum stop from hell,” it’s quite evident the ring is more than a simple object in space. Personally, I loved the scene when the poor guy splattered in that stop motion way. It was powerful and reminded us that the protomolecule, even in the format of The Ring, is not to be trifled with. But what is it and for what purpose did it create its current shape? 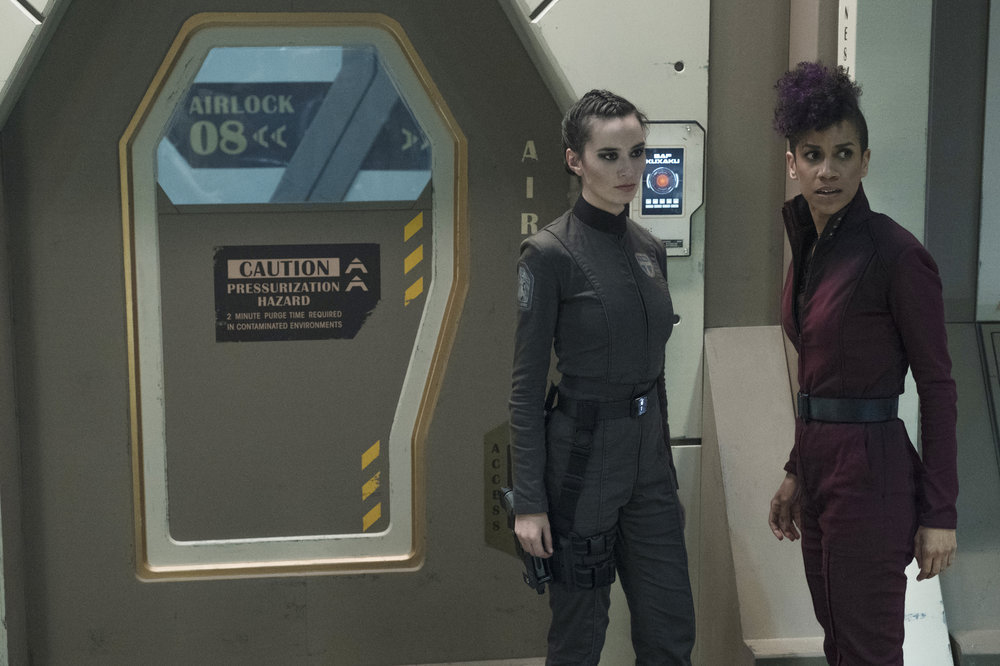 There’s this ominous nature to what’s going on with the protomolecule. Even as the drums of war fade, it’s impossible to ignore that something is happening out there and no one has any idea what it might be?

In the realm of other stuff, can we assume that Chrisjen Avasarala will be (or is) the new secretary general? And an interesting revelation from Alex while chatting with Bobbie that he has been communicating with his wife. She wants a divorce, but at least they are talking, which I suspect offers some level of encouragement. And then there was “the moment.”

You know of what I speak – Holden seeing Joe Miller on a bunk. Perhaps my desire for a Miller return is clouding my judgement, but I wonder if the protomolecule, via Miller, will attempt to communicate with Holden aboard the Rocinante. Let’s face it, any scene with a Miller sighting in it is a good one. I await more sightings and what I hope will be an interesting end game. For now, let’s just let Holden have his ghost sighting.

And finally, what’s going on aboard the support vessel Seung Un? We’ve got a woman with incredible strength, an explosive device and a murder. Did her comments about Holden portend some sort of nasty business intended to harm our captain? It was an interesting development and one that this mystery woman seemed to be wrestling with somewhat. Again, a nice little side story that was quick, yet certainly makes you wonder how it will fit into the larger narrative — because it will.

So, a jump in time, new storylines, new faces and certainly a whole box of new challenges seem to be gathering momentum for the homestretch of season 3. This was a fun episode with all the newness being tossed our way, which I think delivered a nice “bump” of the show as we move forward. Okay, let’s get some of these questions answered.