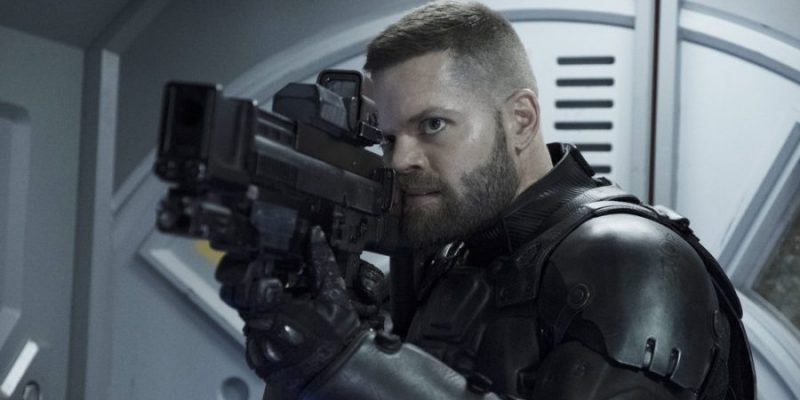 Before we look at this week’s episode, “Immolation,” a few thoughts on the elephant in the Rocinante lunch room. Syfy’s announcement that this season will be its last with The Expanse hit fans hard. While I understand the ratings and why those are important to a company’s bottom line, I was disappointed with the news because the kind of thoughtful, insightful, gritty, well-written work that The Expanse brings to the screen weekly has helped reset the bar on what we have come to expect within this genre. The Expanse has pushed the envelope and that’s a hard thing to see die.

I’m not sure you can ever fully quantify the popularity and impact of a beloved sci-fi TV show simply through ratings. While they are certainly one metric that offers insight, they simply don’t ever fully explain the impact sci-fi has on the audience that loves it.

Sci-fi fandom is a funny and wonderful thing and judging by the hue and cry of The Expanse fans post-announcement, as well as campaigns to get the attention of other providers such as Netflix or Amazon to take on the show for a fourth season, it would seem to be fairly apparent that there’s a tidy little niche that this show has found — and its fandom is passionate and committed. Sometimes, it’s the niche that makes the full picture more valuable.

I’m devastated that this show, this uniquely brilliant gem of a show, should be on the edge of oblivion after this season. Add my name to the list of fans hoping someone sees the potential for more of The Expanse moving forward – or SYFY sees the light. 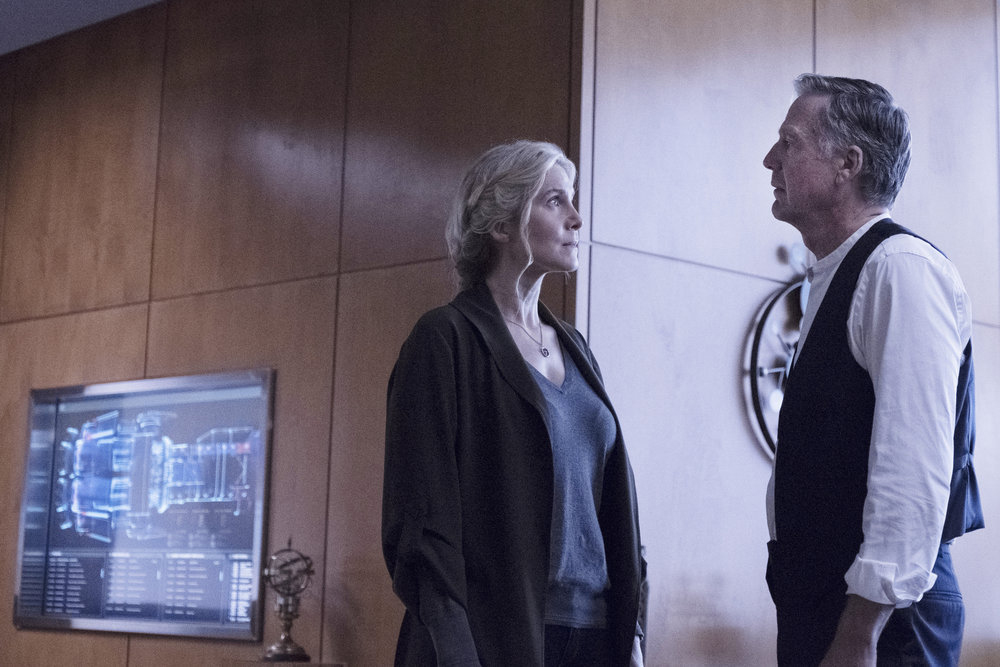 Episode 306 offered us a lot of closure, didn’t it? But let’s start at the back and move toward the front as we saw things develop. So, for starters, it looks the “the work” on Venus has either finished or taken on a new dynamic as the protomolecule launched “something” into space. It looked like a protomolecule-infused jelly fish. As Amos watched from a view screen in the Rocinante, it was hard to miss the impact that this development will have. Once again, with many questions answered or resolved, something happens that leads us to more questions. And the “what is is?” question will surely take center stage.

The Venus storyline has been this little bubbling cauldron on the back burner for the better part of six episodes — not really unpacked, but always there as a little reminder that things continue to develop there. Now? Jellyfish.

Overall, I thought “Immolation” was a tremendously entertaining and tense episode. Everything there is to like about The Expanse was on display boldly and emotionally in this episode. To the actors, writers, show-runner, director and support folks – well done,

Bobbie Draper finally got to go one-on-one with poor Katoa — the protomolecule boy. The two did fierce battle on IO and we had a little throwback moment towards the end as Katoa looked into Bobbie’s helmet, much like a previous hybrid did on Ganymede. It was a scene that brought Bobbie full circle in her exposure to the hybrids. Then, she blew a hole in the hybrid’s head that eventually killed it. Seeing Bobbie back aboard the Rocinante later on, badly bruised, you just understood that this was a warrior who’d met the enemy hand-to-hand and defeated it. Pretty damn impressive.

That was one of many final acts that we witnessed in this episode. Anna showed the Secretary-General the vid about Errinwright and we had some fun resolution there as Errinwright was placed under arrest for treason. I’d rather Errinwright had been gutted right there and then, but that’s the romantic in me. It was a revealing arc in that we got a full glimpse of just how much contempt Errinwright has for his leader. He practically snarled demeaning accusations about the Secretary-General as he realized the jig was up. “Now we have a chance to assure the future of the earth, and he’s shitting himself because he’s afraid the history books won’t be flattering enough,” Errinwright tells Anna. Ouch! Brutal stuff. 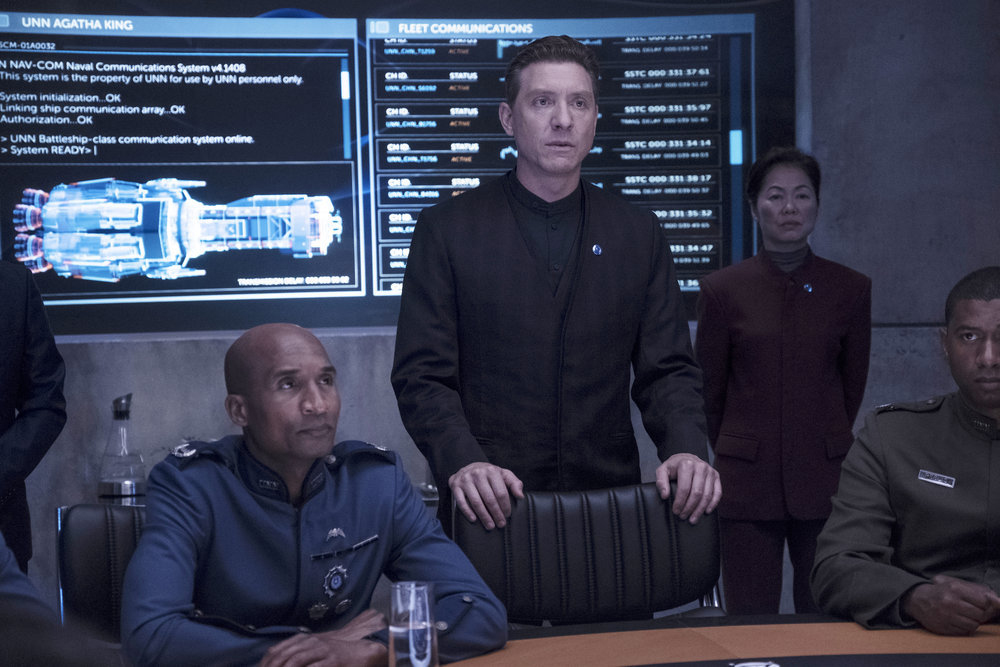 Even under arrest as he’s walking out the door, Errinwright has kind of an arrogant snarl to his face. His contempt is palpable, as is his hubris. Funny, but I’m not so sure we’ve seen the last of the undersecretary. He’s just that kind of resilient baddie that tends to turn up again and again.

Sadly, we’d all hoped that the S-G would read the signs and we’d see a turnaround in his nature. I’m sure Anna was hoping the same thing as Errinwright was escorted away, but alas, the fearless leader is still interested in legacy hunting, noting that the war will be hung around Errinwright’s neck. Anna must be incredibly conflicted about whether to truly support this nob once again. This shallow, self-absorbed man continues to show her he’s not the man she thought he was – or hoped he’d turn into. I can’t help but feel there’s a turning point coming for both of them.

I’ve commented many times on the budding relationship between Prax and Amos and this episode confirmed it as we finally got Prax reunited with daughter Mei. The race through the tunnels of IO offered some good fun (Bobbie vs. the Hybrid), the Holden-Mao meeting, and of course, Prax and Amos coming face-to-face with Dr. Strickland…at last. I was happy there was a tear-filled reunion between Prax and his daughter. It offered hope to us all that in this protomolecule maelstrom, good things could still come of commitment and determination. It also confirmed the friendship between Amos and Prax when the good doctor told Mei, “This is Amos, he’s my best friend in the whole world.” I know, tears right? Admit it.

That had to have tugged at Amos’ heart plenty and he repaid the compliment moments later when Prax, lining up the kill shot on Strickland, was saved from doing something he shouldn’t do by a gentle hand from Amos. “You’re not that guy,” Amos told Prax. Of course, I think we all knew what was coming later as Amos noted to Strickland that he, however, was that guy. Boom, a tap to the head and Dr. Strickland’s brains were all over that chamber. I think Amos sees a little of himself in Prax and realized that killing someone was a path his new friend simply shouldn’t walk down. He knows, because he had to at a young age. A nice moment for both.

Personally, Dr. Strickland’s cold devotion to the research and using children as guinea pigs always bothered me. Again, I have to compliment the work of Ted Atherton as Dr. Strickland. It was on-point even as I loathed this character. 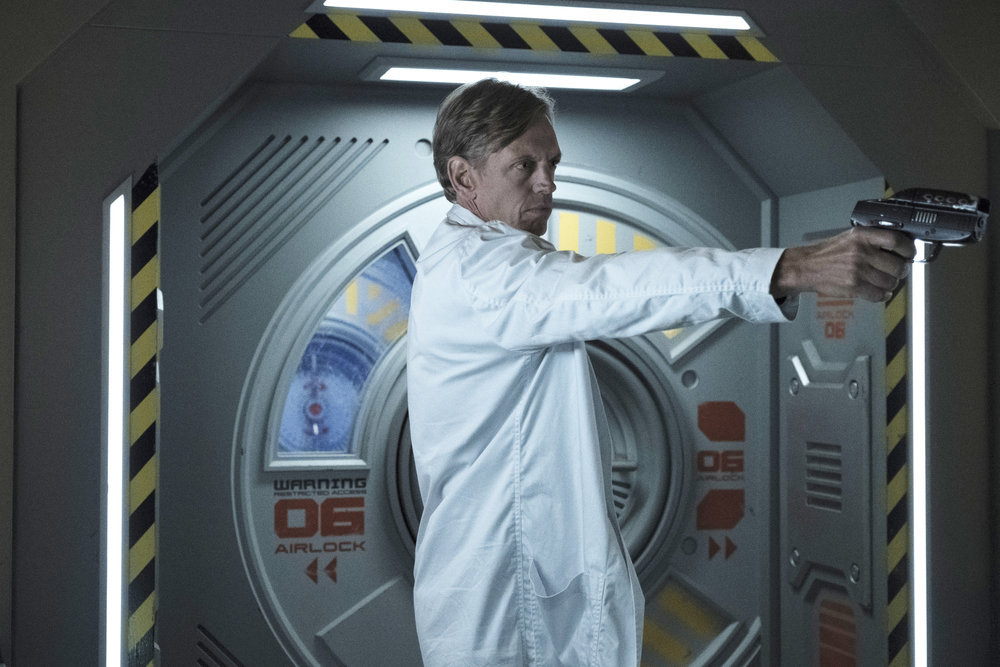 As the end of Strickland came into focus, I was hoping Prax would pull the trigger, but realized that the scene played out just the way it should have. Prax, for all his attempt at hardening his mind and heart on the journey to IO, simply isn’t that kind of guy. Amos and Prax played their parts perfectly and, in the end, delivered a nice arc. Terry Chin and Wes Chatham have a very nice chemistry together as they have developed these two characters, from opposite ends of the humanity spectrum, into a friendship that works. Well done gents.

I was devastated to see Cotyar’s run come to an end. I’m a huge fan of Nick Tarabay anyway, but I thought it was nice to see him delivering the ultimate sacrifice on the Agatha King, infected as the ship was by the protomolecule. Sure, he almost got Naomi and Alex vaporized with him in the nuclear blast to destroy everything on the ship, but it was worth it to see the expression on Chrisjen’s face as she realized he couldn’t hear her and that he was about to die.

The Chrisjen-Cotyar dynamic is one of many on this show that demonstrate how people of different backgrounds can work together successfully, and even care for one another, in unexpected ways. We see that in this final scene as Chrisjen watches her ‘spy’ give his life to save others. It was poignant and well-played. I will miss Cotyar and his knife-sharp back-and-forth with Bobbie. I thought the three of them made a wonderful team that was smartly written and acted by Tarabay, Frankie Adams, and Shohreh Aghdashloo. Another group that had tremendous chemistry in their short time together.

While I remain extremely curious about this next phase of the Protomolecule as this “vehicle” leaves Venus, I’m also looking for the show to delve a little deeper into The Belt over the show’s last half of a season. You know, Fred Johnson, via Naomi, thought he’d found leverage through a sample of the protomolecule. He felt, it seemed, that at last The Belt would have a seat at the table with Earth and Mars. However, I think I have to agree with Naomi about how things played out being more of a benefit for The Belt long-term. 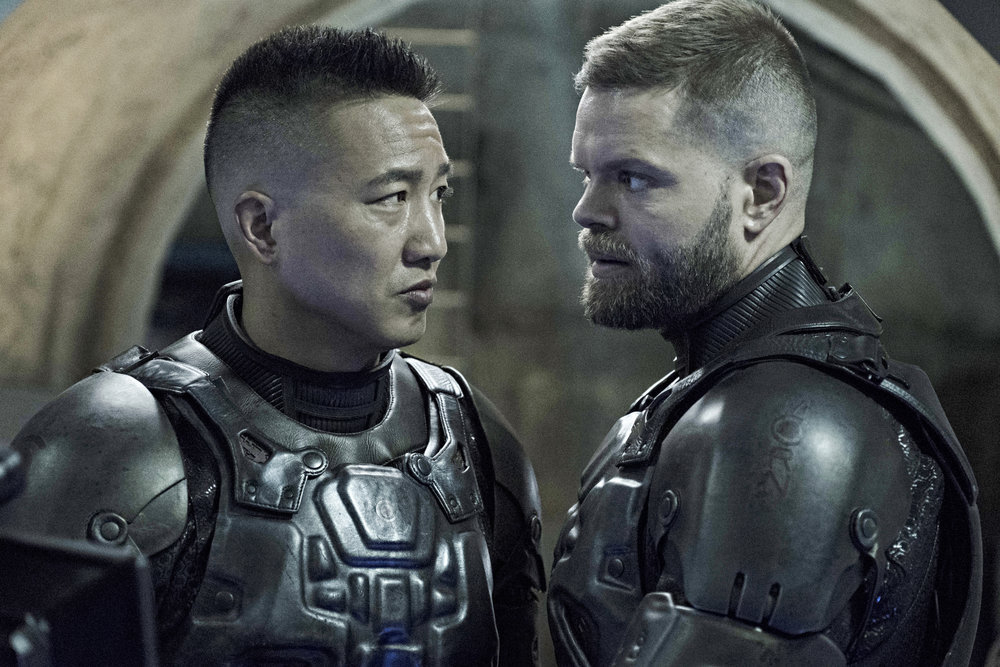 Using those “appropriated” UNN missiles to shoot down the hybrid pods headed for Mars should earn Johnson, and The Belt, that seat at the table more congenially than if they’d used the protomolecule to force the issue. Naomi trusted Johnson and in turn Johnson must have felt that her take on the situation was more appealing.

By shooting those Hybrids from the sky, he’s essentially saved Mars from a catastrophic fate, and possibly ensured that peace between Earth and Mars can be achieved quickly. It’s always rewarding when characters can see the long game in a tense situation. Chrisjen is a master of that kind of play, but in this arc we see that Johnson also can play the long game well. I can’t help but think Johnson and Chrisjen could do some pretty impressive things for Earth and The Belt if given room to operate. I’m looking for more Belter action moving forward.

In the end, there was a lot of putting a bow on things. Bobbie defeats the hybrid, Mao is brought before Chrisjen, Mei is tucked into bed by her dad, Fred Johnson does the right thing, Naomi and Holden are in bed together, and the Protomolecule on Venus launches. In some ways Episode 306 felt a lot like a season finale.

That’s an ironic take on the show given the decision not to keep it going by Syfy. Still, I couldn’t help but feel that way throughout this taut, exciting, illuminating episode – particularly with the scenes I described earlier. A lot of things seem to have been resolved in this episode, which makes me wonder what hell will actually break loose to shake our confidence in coming episodes?

And just where is that jelly fish protomolecule headed? And with what purpose? And is there a Julie Mao and/or Joe Miller sighting in the near future? Oh, that would be intriguing, wouldn’t it?