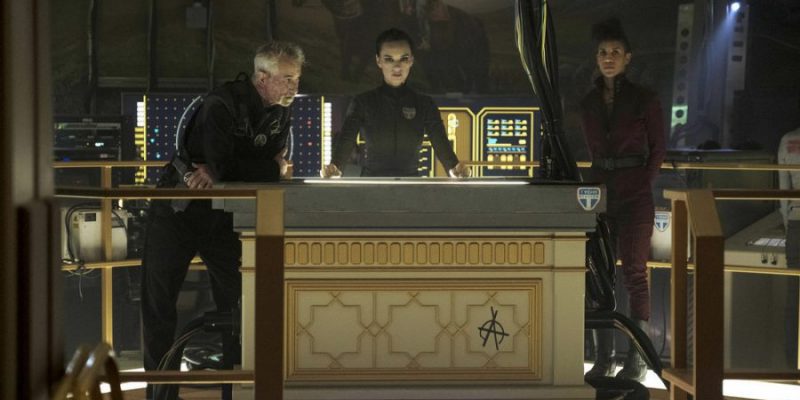 The Expanse: The Ring Reaches Out & Touches Holden – Review

Things are definitely getting interesting with The Ring, but as we all know the big news this past week was the revelation that Amazon owner Jeff Bezos negotiated his way into reviving The Expanse for at last a fourth season.

The news was a thunderclap announcement to the show’s fandom and one that certainly shows that the power of social media coupled with passionate fans can jumpstart a lifesaving effort for a groundbreaking show like The Expanse. It doesn’t always work that way — but this was certainly a situation that benefited from a serendipitous confluence of events. The right person, the right show, the right time and bingo, bango, bongo — at least one more season of The Expanse is headed our way.

I couldn’t help but be delighted by the news and impressed with the passion of The Expanse’s fandom and the outpouring of gratitude that arrived after the decision was announced. There’s passion there and The Expanse is a show worthy of that passion. And it’s a show worthy of continuing into another season (and beyond?). So, the Rocinante gets to fly for a while longer.

Now, about episode 308. Wow, that was quite an episode. And to think it was all a damn set-up job by the OPA. Poor Holden. I’ve positid several times in the past that I wish that guy would get a break, but as he said at one point in this episode, “it never ends.” It certainly doesn’t, Captain. 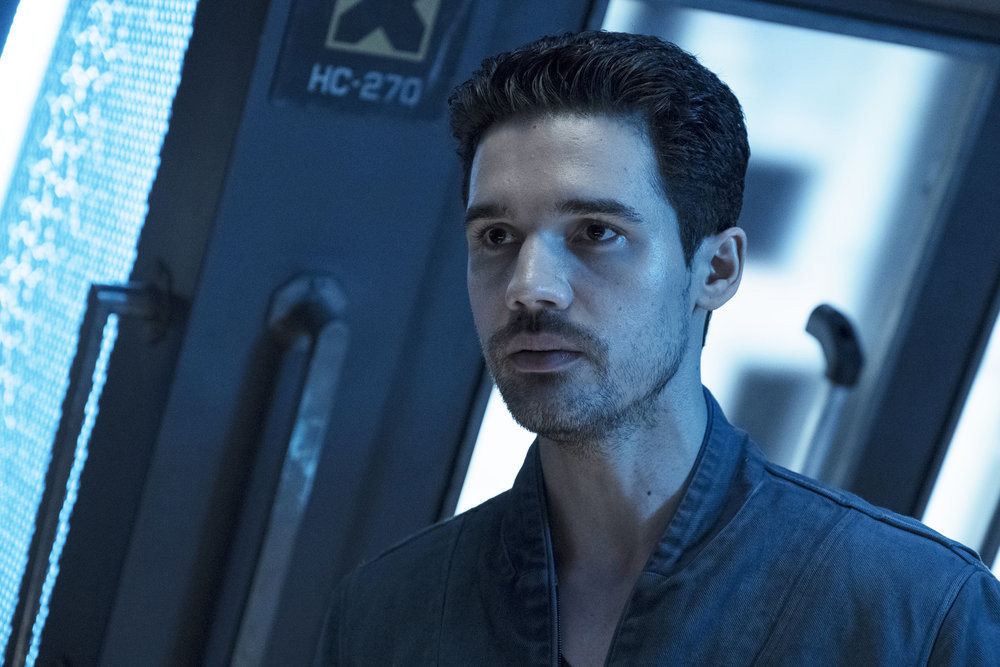 THE EXPANSE — “It Reaches Out” Episode 308 — Pictured: Steven Strait as James Holden — (Photo by: Rafy/Syfy)

This episode, “It Reaches Out,” certainly sent us flying in some interesting directions before revealing its end game. When it was all over, Holden had been set up by the OPA in a very convincing kind of way. We finally got a bead on what Melba the possessed electrician was doing with those explosives aboard the Seung-Un, as well as just what reporter Monica Stuart’s blind assistant was up to. As it turned out, they were OPA operatives that turned a gathering of ships into political opportunism at The Ring.

Looking back on it, you can see the connectivity of the events. But while in the midst of what seemed to be somewhat random acts with no apparent relationship to each other, things were less obvious. That was a skillful bit of storytelling by The Expanse writing brigade and it’s the kind of clever, subtle, multiple storylines that this show is just so good at. Truly exceptional sci-fi delivery in this episode. I thought this episode was killer from first to last and I loved being completely fooled as to what was going to happen.

The video feed of Holden beamed to everyone with him backing the OPA and The Belter’s right to exclusive possession of The Ring was a brilliant gambit. You could see the panic in his eyes and his face go white as it played. Naomi’s reaction was incredible and the general chaos aboard the UNN Ships and the Behemoth was really interesting — each evaluating the political and military currency they had to play with and what they should do. Great work cutting back and forth getting the range of reactions and decisions. Again, skillfully done.

But again, can’t Holden catch his breath for a minute? I really feel for this guy.

However, in the interest of…well, interesting sci-fi, the Holden set-up also helped move us down the Joe Miller corridor a little farther. The title of the episode, “It Reaches Out,” points to why Miller has begun to appear again. The protomolecule, via The Ring, is an intelligence that the current universe has no answer for. It’s thrilling, yet terrifying, and that’s what makes it so damned interesting. It’s hard to figure where the next shoe will drop. It appears the protomolecule has chosen Holden as the vessel it will use to do whatever it wants to do next — and Milller will be the conduit it uses to communicate with Holden. 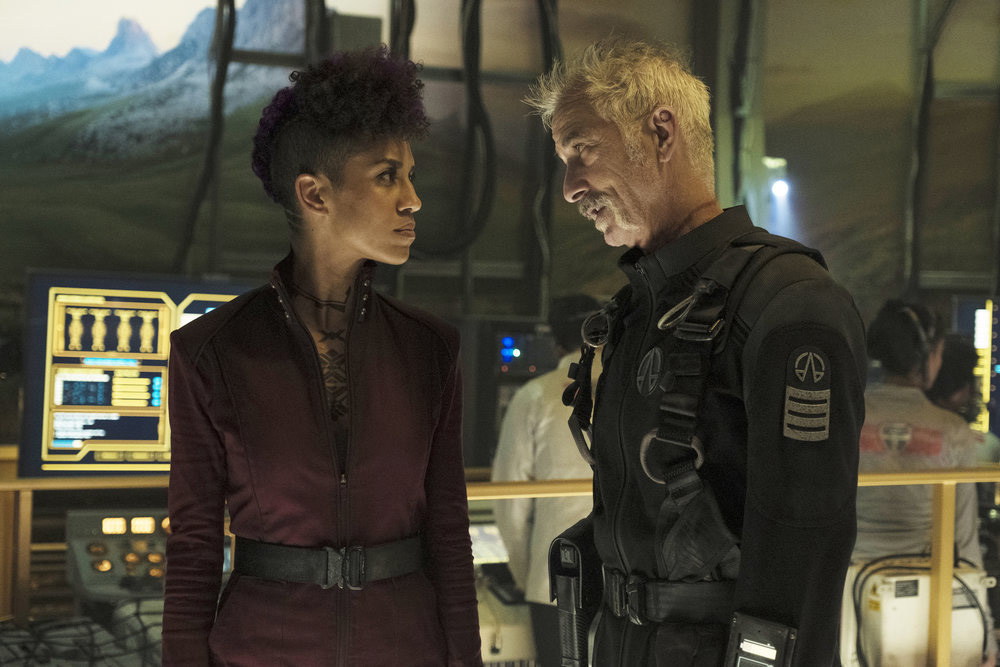 I’ve noted before that The Expanse is a gritty, somewhat dark show, and that the moments of humor are subtle in nature, but so effective. The discussion between Holden and Miller delivered a golden moment in this one. Holden, who was still trying to process that Miller was in front of him, listens to the messenger’s apparent rambling sentences when he blurts out “What’s with the hat?” To which Miller responds, “It keeps ran off my head.” Oh, I know, it’s not a knee-slapper, but in the context of Holden worrying about his mental state in the wake of fatigue, worry, and other factors, it’s a funny moment. I enjoyed it.

And in the end, when the hour turned darkest and all guns were trained on the Rocinante in the aftermath of the phony Holden transmission, the protomolecule offered a way out. Well, we think it’s a way out — right into the heart of The Ring. Where that will lead we don’t know right now as the episode ended with the Roci backing slowly into the ring while a missile slowly tracked them.

At this point it’s hard not to recall the blood splatter of Manao from last episode. Remember that stop-action body explosion? Yeah, that was one for the books (RIP Manao. They’ll be naming ships and children after you for 50 years, buddy). Honestly, the likelihood of Holden and his shipmates ending up like bug splatter is highly unlikely as Miller’s presence and information would seem to indicate that The Ring will allow them to pass.

But what do they want? Miller repeatedly said he “finds things.” And later he talked of being a tool. He told Holden that “you’re a tool that goes places, I’m a tool that finds things.” Is the protomolecule looking for something specific? Does it need transport in a specific way that Holden can provide aboard the Rocinante? It’s no wonder everyone was converging on The Ring — its presence is intriguing. I suspect the questions and answers to come will be fairly spell-binding.

What the OPA’s goal is in trying to claim The Ring, and backing up that claim by blowing up the Seung-Un, is somewhat unclear? Their threat to do more, though, seemed pretty clear — particularly with poster boy Holden telling the universe more destruction is coming. 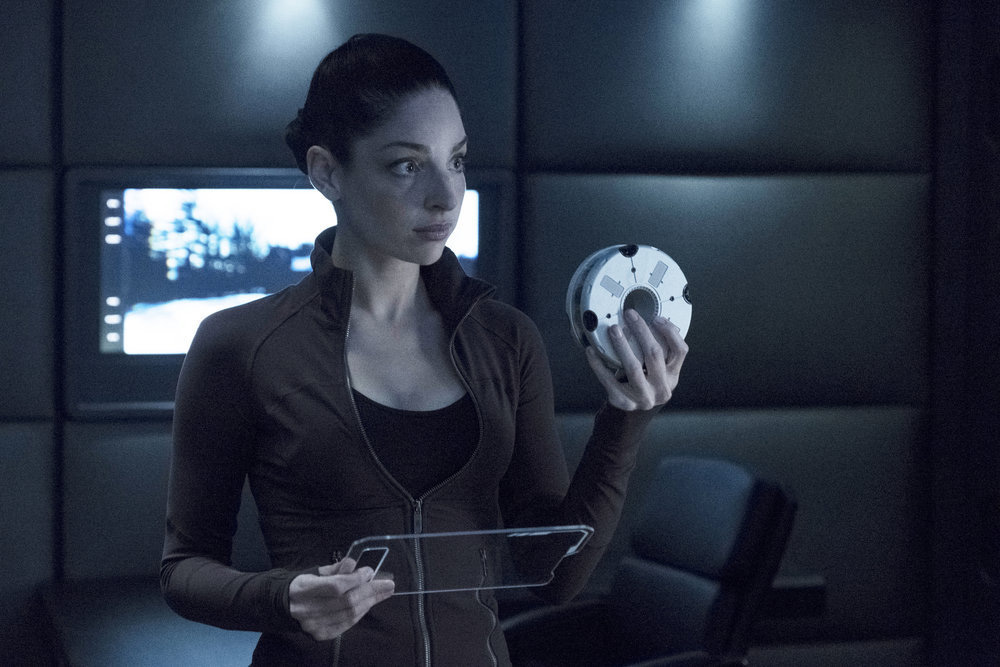 THE EXPANSE — “It Reaches Out” Episode 308 — Pictured: Anna Hopkins as Monica Stuart — (Photo by: Rafy/Syfy)

I will add this, I thought it interesting that Klaes Ashford brought out drinks for he, Naomi and Drummer just as the Seung-Un was about to explode and Holden’s phony message was to be sent. Drummer even noted that Klaes was unusually gregarious and talkative in that moment. Given what eventually happened, I thought back on that little scene and began to wonder just how deep Ashford’s involvement might go? Was he in on it and that was his own subtle way of saluting the OPA’s coming move?

How complicit are Anderson Dawes and Fred Johnson in the Holden set-up? And Klaes was hell-bent on shooting the Rocinante out of the stars — was that a push to destroy the evidence and witnesses to all that had transpired? Let’s face it, Amos and Alex would have gotten to the bottom of the video issue sooner rather than later.

The more I think about it, the more my distrust of Klaes and his motives grows. He’s certainly more than he appears and most definitely carrying ulterior motives and designs aboard the Behemoth. We saw how deep the protomolecule gambit ran. Why should the OPA’s agenda have any less tentacles floating around this “expanse” of space. Still a lot to be sorted out there, I suspect.

For a number of reasons, I found “It Reaches Out” to be my favorite episode thus far in season 3. Just so much going on, so much emotion and struggle coming from so many directions, then the big reveal at the end and one hell of an interesting decision by Holden via the Miller messenger. I thought it was interesting, intense and spun so skillfully that the hour just sped by. I was dialed in from the start and it simply didn’t let up. Just a great example of The Expanse hitting on all cylinders.