The Handmaid’s Tale: Other Women and the Destruction of June, Review, Ep. 204

People are not meant to handle this much trauma. Children ripped from parents’ arms, men and women tortured and killed for beliefs, or for resisting, or for…. nothing. And master manipulators can take that trauma, and turn it into crushing guilt, and turn that guilt into acceptance and even fanaticism. This episode of The Handmaid’s Tale brought us all of this.

June is strong willed, certain, focused – until the pile-on of guilt finally becomes too much. This episode played that destruction like a horror movie, complete with ominous music, rushing wind, flickering flames, dark places. June’s sneer as she tells Aunt Lydia, “You know my fucking name,” slowly dissolves to a blank expression and a vacation from sanity. Recaptured after having the promise of freedom for three months, she’s now chained up, without a friendly face (and you sure can’t count Aunt Lydia), ankle rubbed raw from the restraint.

I heard a story on NPR once on pig balls. For pigs who were being fattened in pens. The pigs rolled the balls around with their snouts. And the pig marketers said it improved their muscle tone. The pigs were curious. They liked having something to think about. Caged rats will give themselves electric shocks for something to do. There are 71 flowers on the comforter. 71. I wish I had a pig ball.

June, if this was your only trouble…. Yes, Aunt Lydia knows June’s name. But, she responds, “The Waterfords have kindly agreed to a trial run, as it were, and if you are a very very good girl, you might be invited to stay. You see, June will be chained in this room until she gives birth. And then June will be executed. Offred has an opportunity. It would be better for the baby.” Aunt Lydia scares the hell out of me. I’d be ready to do whatever she said, but June keeps up that sneer all the way in the red van to the Waterfords. In front of the Waterfords. In front of Serena, who takes out her own anger and frustration on June by choking her. “Ninety two days!” she hisses.

June doesn’t truly understand yet the depths of the beliefs these people have, even after Janine’s eye was removed, and Emily was mutilated, and her fellow Handmaids were burned for not stoning one of their own to death. But this is the only way she has to feel some measure of freedom and independence and defiance, and she isn’t willing to give it up after how hard she, and others, fought to try to give it to her. However, Gilead has no interest in freedom or independence. And June has lessons to learn.

The guilt pile-on was horrendous, and effective. During the baby shower, when the Handmaids all pass by June on the stairs, only one will stop and talk to her. The others won’t even look at her. “You almost made it! That sucks. Waterford was shitting himself.” June learns that Mayday has “gone silent”  and won’t be helping Handmaids any more, and it can be attributed partially to the major clusterf*** surrounding June’s extraction, I’m sure. So even though none of that was directly her fault, there’s guilt.

And Ofglen’s tongue was cut out, Alma tells her, after she spoke out for Janine. “That wasn’t your fault,” Alma says. “Not that part.” And June can see the burn marks on Alma’s hand. More guilt.

June recalls the guilt she walked around with even in her previous life – the guilt of ruining another woman’s marriage. We see Luke’s former wife, Annie, who wants to rebuild her marriage, and seemingly stalks June and Luke. I understand Annie’s anger, and can’t at all sympathize with either June or Luke at this point. And June understands as well – she’s definitely conflicted about carrying on this affair. And now Aunt Lydia is reminding her: “You were a fallen woman. I am trying to give you the best chance you can have.”

Aunt Lydia pulls June out of the house to show her the biggest hammer of guilt in her arsenal. They walk down to the river, and there, hanging on the wall – “I believe you knew him. He drove a bread delivery truck.” While Omar was willing to put himself in jeopardy for his beliefs, it was June’s insistence that he take her with him when the next step in the escape chain fell apart. “The wife will redeem herself by serving as a Handmaid. The boy will never see his mother again. He has been placed with new parents, parents that are fit. Gilead has shown them mercy. They will have a chance at a better life. Of course, if you had asked them, they would not have been the path they would have chosen. But you didn’t ask them, did you. You chose for them. Such a selfish girl. Who killed him? Whose fault was it? Who induced him to commit such a crime? and why did God allow such a terrible thing happen?” Ann Dowd is at her fanatic best here!

“To teach me a lesson,” June replies, hysterical. “To teach June a lesson. June did this. June ran away. June consorts with terrorists. Not Offred. Offred is free from blame. Offred does not have to bear June’s guilt.” And it’s here that June realizes, unconsciously, that June can’t survive this either – the only way is give in and be blameless, to be Offred. 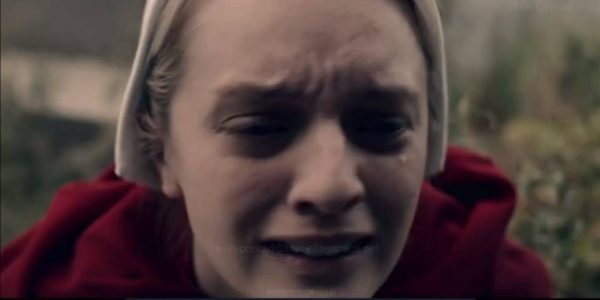 If I’ve done all of this, June’s overtaxed conscience is telling her, what else have I done? “I have done something wrong. Something huge. I can’t even see it. Something that’s drowning me. I am inadequate. Stupid. Without worth. I might as well be dead. Please, God, let Hannah forget me. Let me forget me.” And so, she does, passing by Nick with no expression, the only way she can survive.

I wasn’t a big fan of the use of music in this episode. It felt way too much like a horror movie – would the killer be waiting in June’s old bedroom? Don’t go in there, June! The whooshing wind, the ticking clock, the bass notes against the tinkle of the music box a little later in the episode – all a little much. But I suppose the real horror here is psychological, rather than slasher – just as effective, however.

The baby shower was an interesting event, organized by Aunt Lydia to show society that Offred has been returned after “being kidnapped,” and that everything is now competely normal in the Waterford household. Such a normal ritual, made so odd by the presence of the Handmaids standing behind the wives, and gifts being given not to the women having the children, but to the women taking the children. My favorite moment was just a quickie – Rita taking an unnoticed sip of the champagne before handing the glass to a Wife. A tiny show of defiance there! 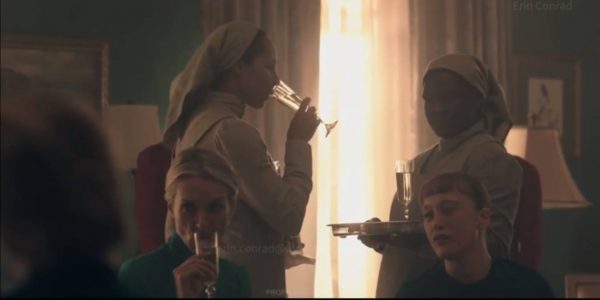 Ceremony and ritual seem to be extremely important in Gilead. It’s not a surprise – rituals make a person feel like they’re part of a larger whole. They emphasize belief. They provide a framework for behavior, showing the “right way” to do something, and discouraging an individual’s “wrong way.” In Gilead, the Handmaids have their own rituals. The monthly “ceremony” is completely scripted, with specific actions and prayers. And we saw another one in this episode – a ceremony to bind the Handmaids and Wives together, reinforcing the place each group holds in this new society. It’s obvious that Serena completely buys into this – she’s so fervent, almost transported, as she repeats, over and over, “Let the little children come to me,” answered by the other Wives (sorry, Mothers), “For such is the kingdom of Heaven.” (And weren’t you horrified by poor Ofglen attempting to mouth those words?)

Serena is losing her balance as well. She’s never seemed totally balanced to begin with, but she’s coming unhinged in this episode. We know she was one of Gilead’s primary architects, and is a true believer in most of it. But I get the feeling that one push would make her one of those woman who, like in an earlier episode, would steal another woman’s baby from the hospital and run with it. Or, even more horrifyingly, as happened here in Chicago several years ago, cut a fetus out of its mother’s womb and claim it as her own. It’s not so much June’s insolence she can’t stand, it’s the daily reminder that this child isn’t growing inside her. She’s wound way too tight, slapping Rita when she suggests cleaning up from the shower, climbing in bed with June and putting her hand on the growing belly, wanting June out of the house (but I don’t think she realizes that June would be executed after the child is born, because she says “I don’t care where she goes”, not “I don’t care what happens to her” after the child is born). Keep an eye on her, Fred. Your wife is one donut short of a dozen.

Just a quick comment – it’s not uncommon for “the guys” to go off and do their own thing while the women are at a baby shower, so we see them off skeetshooting. Interesting choice of activity. But is this a hint of what’s to come? I sure hope Canada isn’t about to ease their sanctions on Gilead! Right now, Canada is the sane country, seemingly horrified by the activities down south. Fred’s angling to become the envoy to Canada – would he  be planning to bring Offred with him as an example of their Handmaids? Would that be an opportunity for June to escape, or to be rescued?

Want to talk about the show? Join us in our non-political Facebook group, The Handmaid’s Tale on Hulu – Gilead Online