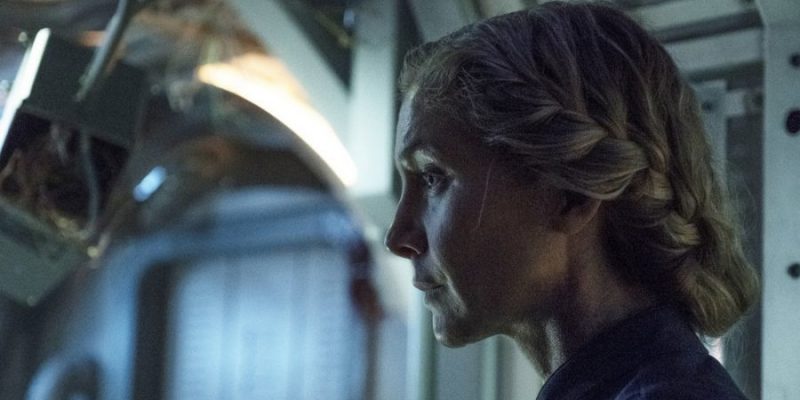 The Expanse: An Ominous Warning, A New Respect – Review

You have to hand it to the creative hands behind The Expanse as EP. 311, “The Fallen World,” used the whole concept of zero gravity as not only the backdrop to the episode, but another character in the drama that is playing out inside The Ring. I don’t know if I can recall a show using zero-G to such wonderful effect, but EP. 311 certainly made the lack of gravity a major player in the way things ultimately turned out.

And while the story moved along, Holden delivered quite the ominous warning at the end when he told Bobbie that he’d had a vision. He looked at her and said “the end of everything.” Hold it, pal. The end of everything? Are you positive about that? Well, he certainly seemed committed to the words and I’m inclined to believe that little trip he took within the nucleus of The Ring showed him something dazzling and ultimately terrifying. I think we’ll be using Holden’s words as the springboard toward the season finale. However, “the end” is often also “a beginning,” so it will be interested to see how this all plays out as he regains his full faculties aboard the Martian ship.

Depending on your particular bent within The Expanse, there were (as usual) plenty of interesting moments in this episode, but I’m going to focus on what transpired between Klaes Ashford and Drummer below decks. The Ring could very well protect itself from perceived threats by changing the inertia around it to slow things down. That, of course, had disastrous effects on the machines and people traveling at higher speeds…as we saw. People died, they were injured and there was plenty of uncertainty through The Ring when the inertia took a tumble. 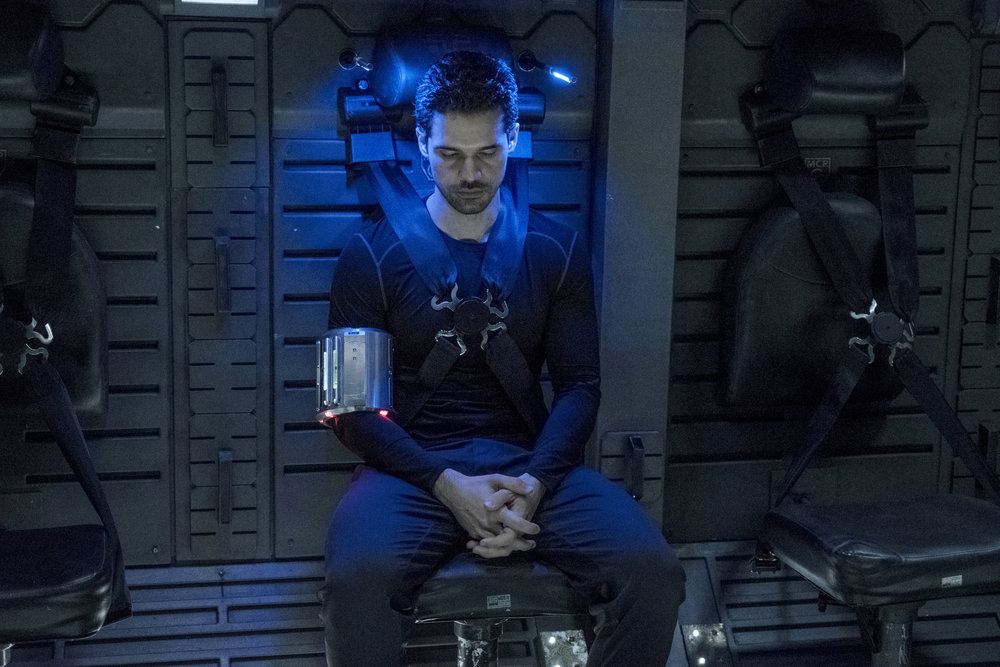 Within that, seeing Ashford and Drummer pinned by machinery was disheartening. However, the discussion, revelations and sharing that ensued between the two during the episode shed new light on each, and perhaps changed a small part of their respective perceptions of each other in a more positive direction.

I’ve said from the outset that Ashford and Drummer had a wonderful dynamic as portrayed by Cara Gee and David Strathairn. The Expanse writers and showrunners delivered a powerful look at these two while trapped in a deadly and desperate situation. The two have been verbal sparring partners since Ashford came aboard the Behemoth — Ashford subtly undermining Drummer’s command decisions, Drummer not-so-subtly letting him know she sees right through his guise. They have danced the dance of passive-aggressive leadership as The Ring scenario played out and I’ve enjoyed that dance very much.

But trapped together, all alone and with no one knowing where they are, the chance to ask questions of the other and put away the facade’ each carries with them was eye-opening and very welcome. I love these two characters and every interaction between them is revealing on some level. But this was quite the prolonged moment and I enjoyed the chance to see the walls come down a bit and some truth seep out.

In the end, Drummer’s sacrifice seemed to be the sacrifice that needed to be made. I truly believe that no matter Ashford’s previous, hidden agenda, Drummer’s willingness to potentially sacrifice herself to save him will have long-term positive benefits. He seemed truly touched by her actions and that, I believe, will pay dividends down the road. Let’s hope that we don’t lose our beloved Drummer, though. Given the rise in mutual respect between them, I’d be curious to see how their relationship shakes out moving forward. 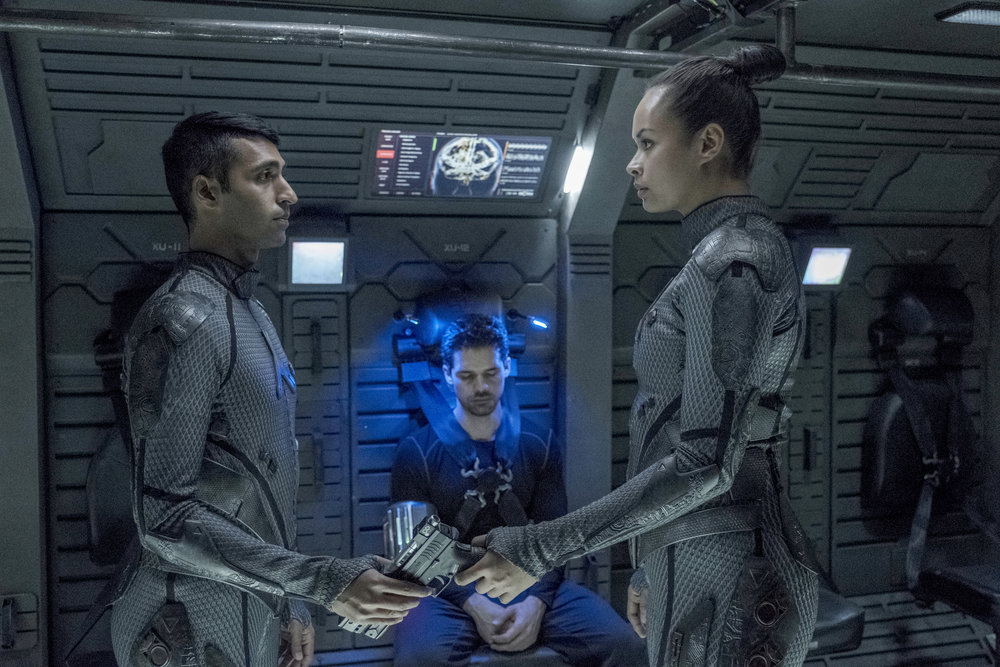 Again, plenty to digest in this episode, but for my money the time spent with Drummer and Ashford in that room, pinned down by machinery, was one of the highlights of this season. Two characters that are fascinating and frustrating opened the door just a crack into their personal feelings and emotions. It was incredibly well done and a nice counter-point to the chaos that was swirling elsewhere in The Ring. Oh, and one last thing, “Spin the drum.” I like to think that little phrase will become catch-phrase The Expanse lovers will trot out regularly. Go ahead, next time you order at the drive through, when the voice on the other end says, ‘Will there be anything else,” be sure to say “spin the drum.” It’s catchy, no?

I’ve also loved the development of Bobbie Draper since last season. The gung-ho Martian Marine has tasted the bitter flavor of betrayal, the sweetness of redemption and the satisfaction of seeing a much larger world (and the people in it) than many of her comrades. That showed in this episode as she and her fellow Marines hauled an unconscious Holden onto their small ship. Her fellow ship-mates could only see the criminal Holden, while Bobbie’s time with him led her down a different, more expansive (see what I did there) path. A season ago, that would never have been thinkable. Bobbie Draper was as gung-ho as you get and perfectly willing to follow the code of the soldier and not look for the layers and nuances that she now knows exist.

Again, I’m enamored of Frankie Adams’ portrayal of Draper and delighted with how far she has come (through Adams’ talents) in just over a season on The Expanse. She had Holden’s back from the get-go and helped keep her comrades emotions in-check concerning their new guest. She shows a depth of understanding that I don’t think was there last season. But then again, she’s been through the ringer since we first met her, hasn’t she? So really, what’s not to love? Great to see a character grow like that. 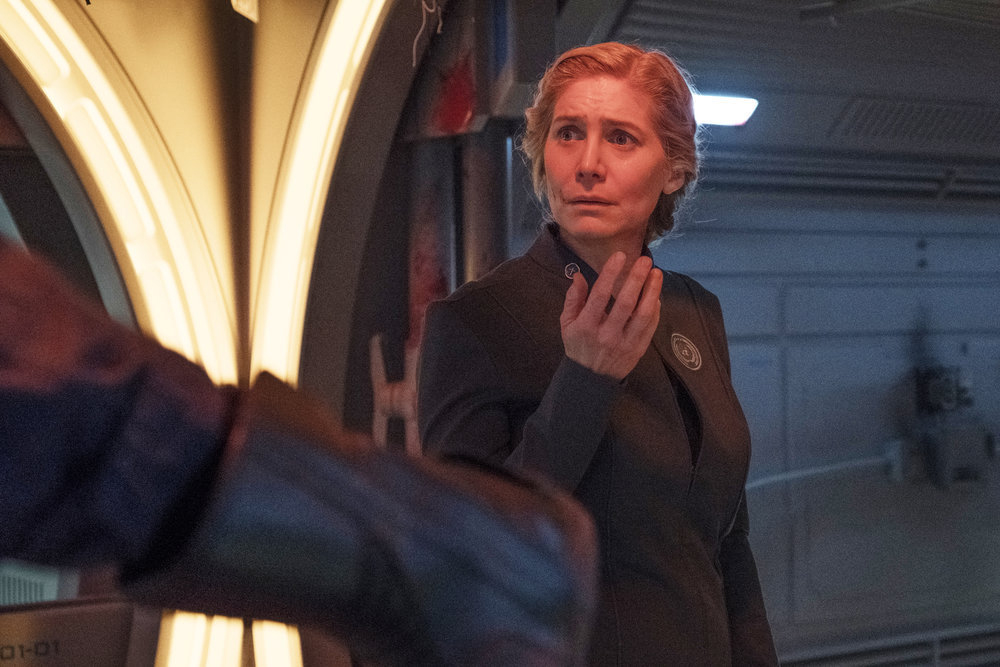 But what we’re left with is Holden’s final words after he revived. He told Draper “I saw something. A vision….the end of everything.”

Boy, as a viewer you can’t hear something like that without thinking there is something big, very big coming down the pipe. But big in what way? Big as in how big? Big as in “gonna wipe us all out” kind of big? So, we’re left with our own surmises on this score. Is The Ring a gateway to other galaxies and the life forms within them that could pose a danger? Is the ring, via the protomolecule, the entity that will “end” everything as Holden stated? Will we have war?

So much to unpack in those few little words, but it gives us a hint that something big is coming as we head toward the season-ender. I’m not excited to see this season end as I’ve enjoyed the heck out of it, but I’m very anxious to get to what’s coming…and how it will set the stage for season 4.

Again, let me say right here that I really enjoyed seeing this episode spend so much time in zero-G. I thought it was well done and thoughtful and delivered an impact that so many zero-G sequences don’t. The bodies, drops of blood, coffee cup, equipment floating around lent an eerie and surreal feel to the whole episode, which I would imagine would reflect everyone’s feeling in a situation like that. The zero-G became another character in The Expanse and I really delighted in it.

Well done to the production people, actors, director and anyone with a hand in creating that concept. You don’t see arcs like that in zero-G for that long — ever. Yet it was not overdone, but very effective in its delivery. A little twist that lasted throughout the episode that gave it a different feel. I liked that. Bet you did, too. 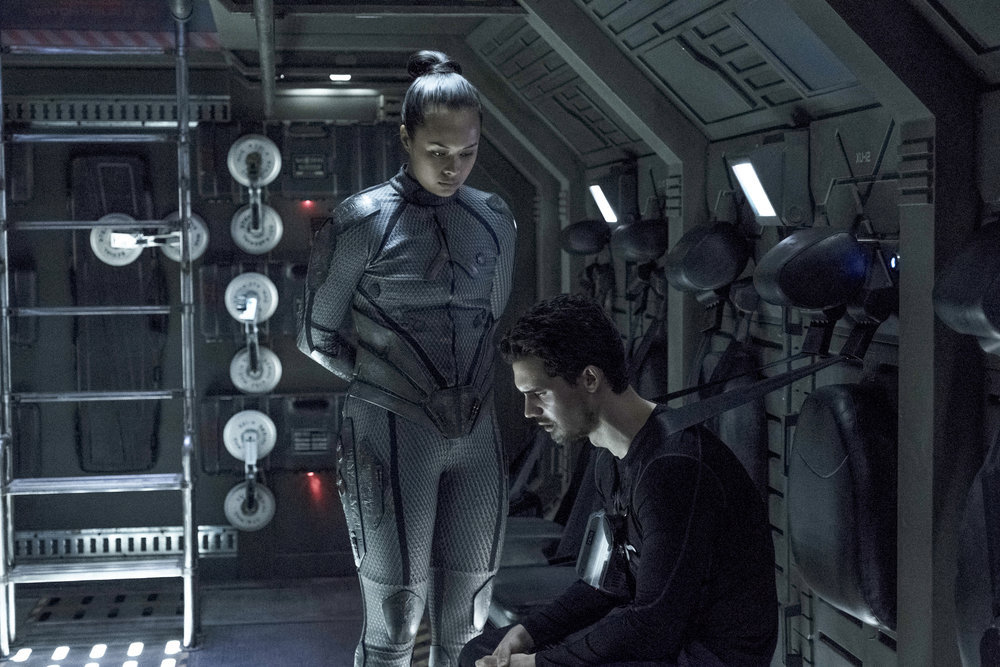 I have to admit a growing admiration for our space minister Anna Volovodov. When Melba made her escape via space to get onto the Rocinante, I thought the shot of Anna screaming at Melba through the air-lock was kind of the end of it. But dear Anna showed she’s got some fire in the belly by following Melba to the Roci and saving Naomi’s life while in Melba’s death grip. Great to see Amos and Alex still alive — bruised and bloodied, but alive — and to see Naomi back home where she belongs (Amos, nice little line about changing her hair. Again, subtle humor that resonates so effectively), but to see Anna’s passion and commitment to justice being done on Melba was something special.

I’m sure Anna hasn’t done much space walking, but it’s also fairly obvious that when she puts her mind to something (and that something was Melba), she will not easily be dissuaded. So now she’s aboard the Rocinante, Melba got a nice dose of shock therapy, and Naomi will try to put the pieces together. I think Anna will be an interesting part of the Rocinante crew dynamics moving forward, provided she stays aboard for a while — and I think she will.

“The end of everything’ was a threatening signal to us all that something big and full of impact is rushing toward the players in The Expanse — and we, the viewers. The Expanse has been a treasure this season, with episode upon episode building toward what we suspect will now be a tasty crescendo. It’s also shown us quite clearly why the passion for this show is so intense and so well-deserved. The Expanse pushes back the boundaries of gritty sci-fi each week and that resonates with people. it’s also a little confining. The Expanse is more than sci-fi, more than action/adventure, more than what a show like this traditionally delivers. And that’s why we watch. Episode 311 simply delivered…again.