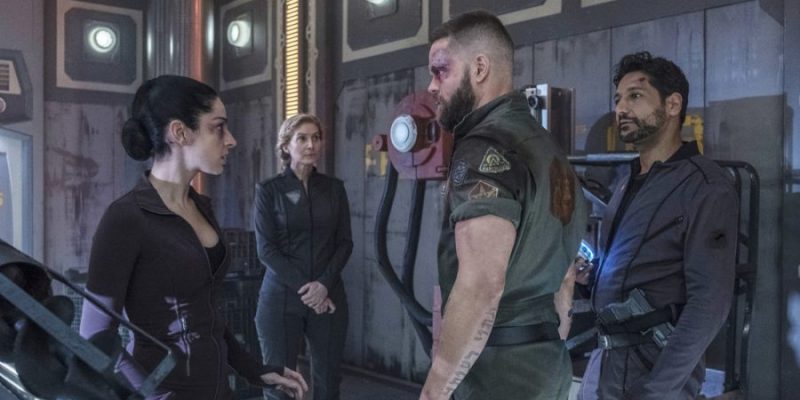 Let’s take a moment, have a deep breath or two, and ponder the glory that was the two-part season-finale for Season 3 of “The Expanse.” Was it me or did we get to experience two hours of tension, twists, turns and, ultimately, a successful extraction from the tentacles of The Ring? The end game was freedom, but it’s clear that the future weighs heavily on Captain James Holden’s mind. It’s a future he sees as having plenty of unsettled potential.

And perhaps the biggest question he asks, as we bask in the afterglow of a tremendous season finale, is what wiped out the race that created the protomolecule? His worry is also a warning. I’m hoping we see why that warning is important in season 4. But for now, what a cracking good finish. 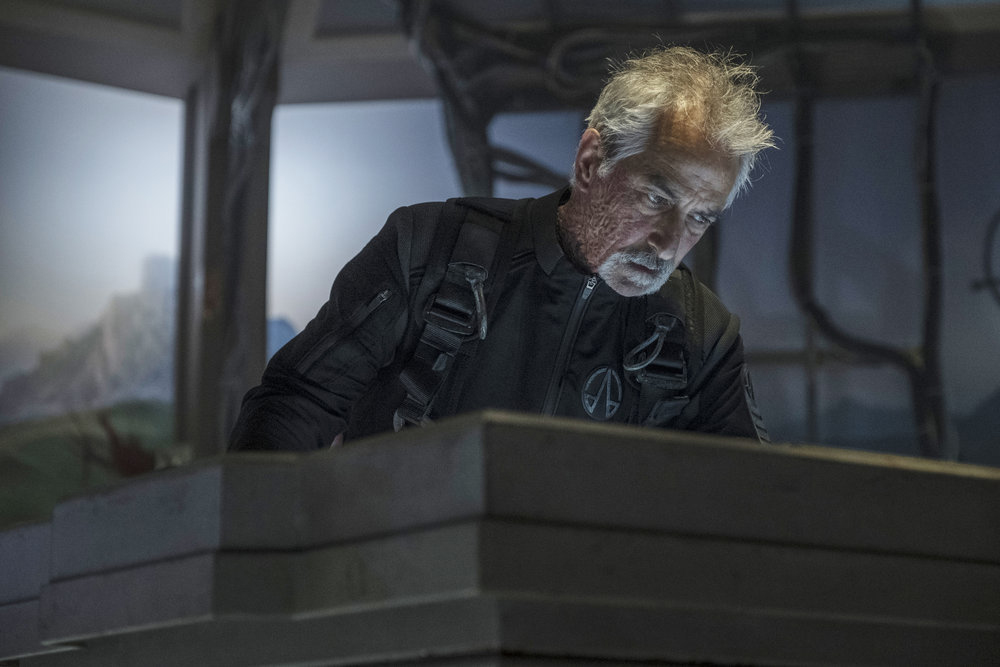 The two-hour conclusion led to a wonderful sense of continuity between the two episodes. Episode 312, “Congregation,” put us back on the Behemoth and under the command of Klaes Ashford as the plan to try to extricate everyone from The Ring’s grip started to bump up against others’ plans and interests. The clincher, EP. 313, “Abaddon’s Gate,” brought the season to a rollicking conclusion with Ashford’s blind commitment to a course of self-sacrifice ultimately being trumped by Holden’s realization (through Miller’s advice) that to go forward everyone simply had to go dark.

Talk about two diametrically opposed positions clashing face-first in the waning moments of what could be their last breath. Ashford has always been a character that has been fascinating to watch germinate. A mixture of cold calculation, passive-aggressive maneuvering and stunning self-realization that created a complex influence aboard the Behemoth. In the end, he was willing to sacrifice himself and all the other ships in The Ring to “save humanity,”

I think he actually felt he needed to — not for humanity’s sake, but for his own. At last, the purpose of his life was staring him straight in the face and he wanted to fulfill that purpose — even when the option of listening to others presented itself. Kuddos to the writers of The Expanse for creating, along with actor David Strathairn, such a layered character.

I thought it interesting, when all was over and the pieces were being picked up, that when Drummer visited an injured Ashford in sick-bay, with a bottle and glasses in her hand, he turned away. Disappointment was etched on his face, possibly because he turned out to be wrong. But also, I believe, because deep inside there was regret at not dying in a blaze of glory. It was a telling moment, I thought, and one that speaks volumes of Ashford’s state of mind. I think he’s a hurting individual. 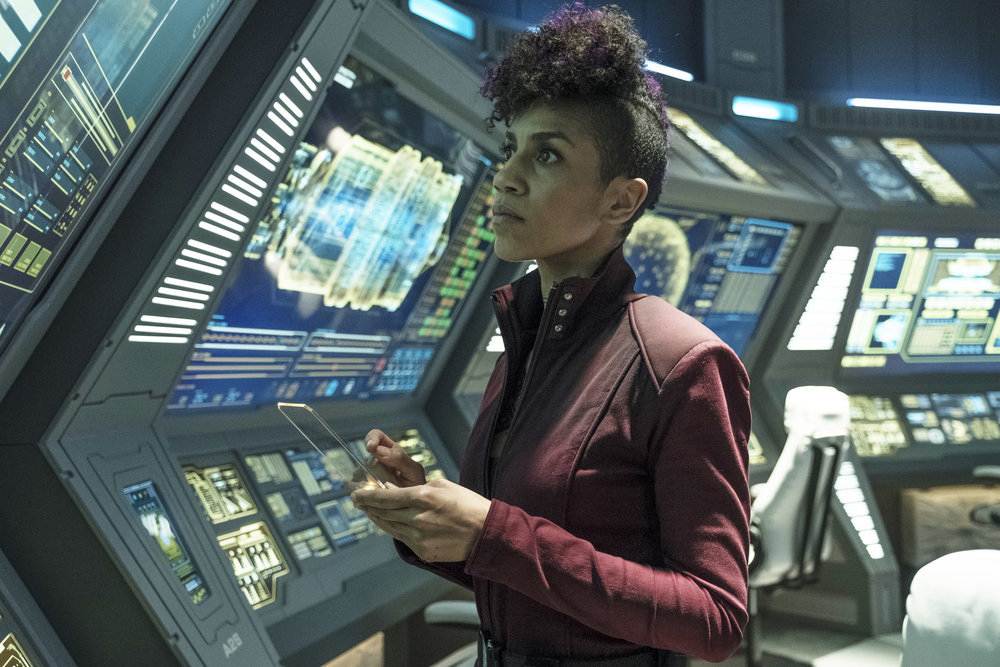 Speaking of Drummer (through the incredible work of Cara Gee), it’s hard not to be impressed with that lady’s toughness and tenacity. Let’s see, in saving Ashford earlier you have sacrificed your spinal column, forcing you to lie down as a new one is grown inside you. Forget that, she says, I’m going to take this pile of equipment on the counter and build myself a hydraulic walking device. Once Naomi finds her in mid-build, the contraption comes to life. Drummer’s toughness, tinged with compassion and intuition, has never been in question. It has marked her as “special.”

But I truly enjoyed her moxie in this episode and her unwavering support of Naomi, and through Naomi — Holden. It would have been easy to simply render Holden’s story to the “nutso” bin, but that’s not what Drummer did. Naomi and Drummer’s relationship has the fabric of steel running through it and it is that fabric that took Drummer — step by step in her walking apparatus — to Holden’s cell to hear the tale. Let’s face it, Naomi is quite the indomitable force in her own right. They could clash, but they don’t.

Talk about the bonds of sisterhood rising to a level of incredible trust. When all hell’s breaking around you and it feels as though all is beyond your control, it takes something special to look into someone’s eyes and see the truth. And then act on it. Drummer did that and as excited as I was to see her walking again, her stand for Holden and his information on how to keep The Ring from annihilating the whole system was sheer badassery. It’s hard not to wax poetic about the chemistry Dominique Tipper and Cara Gee bring to their respective roles, but I thought these two really sparkled in the season finale, particularly EP. 313. 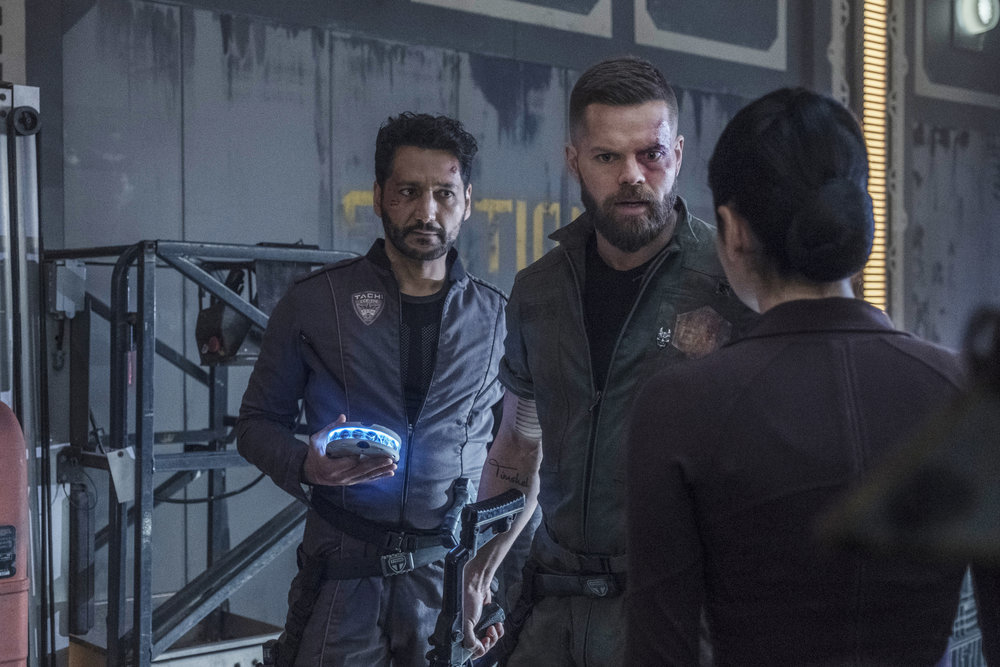 I must admit I smiled broadly when Holden, Naomi and Drummer were in the elevator shaft being pursued by Diogo and his minions with the stolen Martian armor. Drummer is prepared to sacrifice herself to keep Holden and Naomi on mission, but doesn’t have to when her friends free up an elevator and it crushes the pursuers. A nice touch, that.

What was so interesting was that there were so many little story arcs all attempting to reach a similar goal — just from different perspectives. Alex and Amos, along with Anna and journalist Monica Stuart, are broadcasting the plan for everyone to power down from the Behemoth even as they are being hunted down by Bobbie Draper and Martian soldiers. Holden, Naomi and Drummer attempting to take the fusion reactors off line, Ashford convinced that a powerful laser thrust to the nucleus of The Ring will destroy them all, but save the system, and Melba getting a second chance and making the most of it for the good of all. As I said, a lot going on and the directors, showrunners, writers and actors gave us a pretty dang impressive finish to the season.

Looking back, two characters that I think have grown tremendously are Amos and Bobbie. You know, Amos began this thing as simply a “blunt instrument” that had unwavering devotion to Naomi. But time and exposure to others has imprinted some pretty remarkable personality changes on him. Oh, he can still wheel and deal in the world of violence like a champ, but you can see how he’s started to push the boundaries of who he thought he was into who he might be. First was his exposure to Dr. Prax, whom Alex has called his “best friend in the world,” and now he’s seen a different world through the eyes and actions of Anna Volovodova. 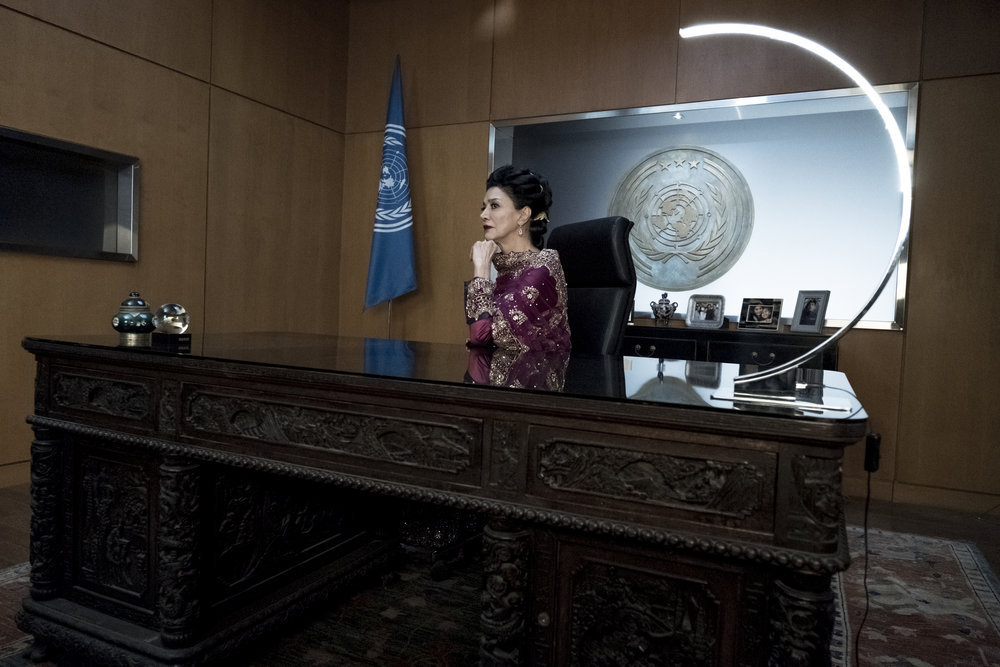 It’s interesting to watch Amos ask questions about why Anna does some of the things she does, particularly over the last three episodes. The difference for Amos, in my view, is that his experiences aboard the Rocinante, and through the battle with the protomolecule, have given him permission to ask questions of himself and the life he’s led.

His declaration that he wouldn’t let anything hurt Anna was another subtle, yet telling, moment in the life of Amos. He’s come a long way in the last two seasons and in searching for answers from others, he’s starting to find them for himself. Wes Chatham has exposed some really fun layers to this character. As usual, he was in the middle of the action in the finale, but I think his motivation for it has changed a bit.

As for Draper, her firefight with Alex and Amos down in the Behemoth’s bowels was a little tense, but also added some humor when they recognized who each were. There’s a ton of mutual respect there and that was fun to see. Again, Draper was another ‘blunt instrument’ type when we were first introduced to her, but her experiences with the Rocinante crew, Chrisjen Avasarala and Cotyar, as well as within her own military framework, have changed her perspective. Bobbie Draper is no mindless military machine, content to follow orders, but a Martian who can see a much broader landscape.

I don’t know what the future holds for her, but I thought it was interesting that when the dust had settled, she was strapping in next to Alex on the Roci. Perhaps she’s had enough of the Martian military and is joining the Roci as a new crew member? Let’s hope so. Frankie Adams rocks this role in a fun and interesting way. 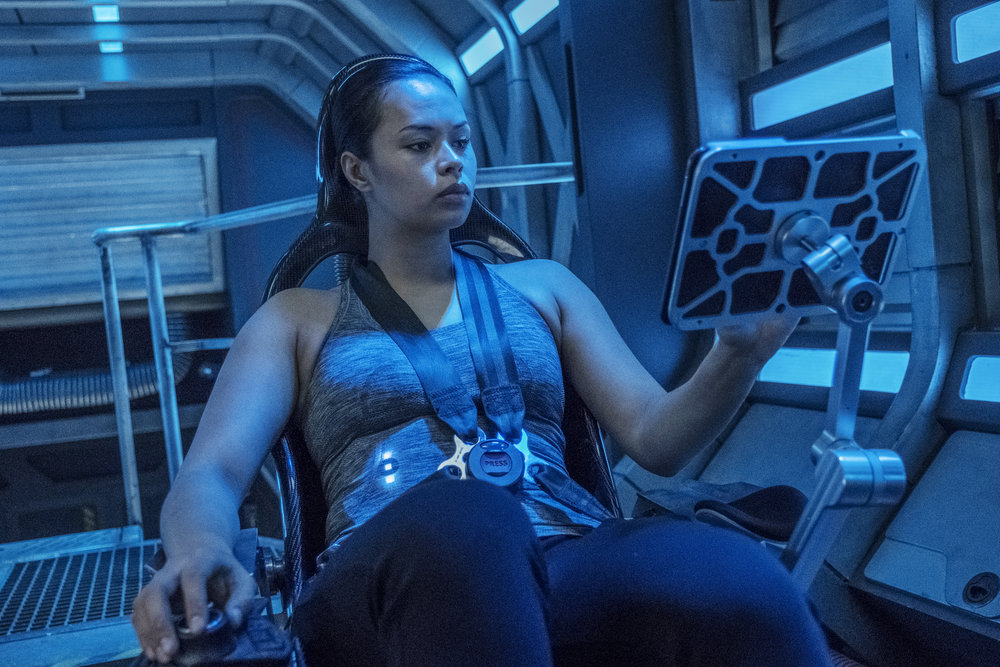 I think it safe to say that most of the major players in season 3 of The Expanse experienced some very interesting growth. Holden continues to tilt at windmills, but by sheer force of will and the passion of his crew and new friends, seems to find a way to win the day. It has to be exhausting. Naomi experienced some self-discovery about “family” herself and we’ve seen quite the array of skills and talents from Anna, our minister. Alex continues to be a burgeoning force within the Rocinante and this season we got to see him play a larger role in things, as well as see his softer side as he tries to repair a relationship back home.

There’s just been a lot of relational and emotional movement in the last two seasons and looking back you can see it clearly. The characters of The Expanse are not caught in a developmental vacuum — they progress, they improve, they expand and they make us enjoy them all the more for that very reason.

So here’s to you Wes Chatham, Dominique Tipper, Steven Strait, Cas Anvar, Shohreh Aghdashloo, Frankie Adams, Thomas Jane, David Strathairn, Cara Gee and all the other actors who fill out this wonderful world we’ve become enamored with. Your passion for your characters is now our passion, and that’s when this whole thing gets magical. Thanks for that.

To the showrunners, writers, directors and those who sit behind the scenes waving the wands that creates this magic, thank you as well. You got something special going here. 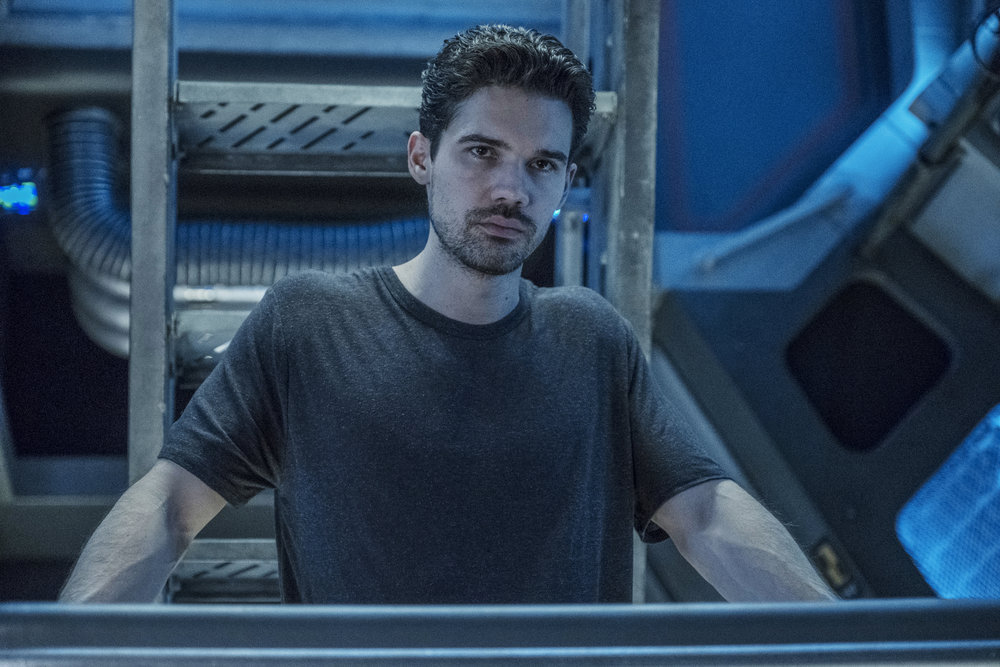 So now what? Well, season 4 will be part of our lives thanks to Amazon owner Jeff Bezos and his fandom. What can we expect? Well, Holden’s take on the new frontier was, as noted earlier, a bit of a warning. He notes there are 1,300 habitable systems on the other side of the ring and said “it’s gonna be another blood-soaked gold rush” as humanity seeks to take its first steps into those systems.

It’s a great comment on humanity’s lack of respect for things it doesn’t understand or should be frightened of – as well as greed, gain and politics. He knows that the lessons learned within The Ring will dim with time and that will ultimately be dangerous. Holden grasps that humanity will step on each other’s toes as the exploration begins of the new systems. He saw something in his vision while in the nucleus and he’s clearly unsettled about it.

What wiped out the builders of the protomolecule? Fortunately, we have a fourth season to start to explore that question. Should be a very interesting ride. I’ve enjoyed it tremendously thus far and I don’t think I”m alone in that.