I told you Director Vance was going to start coming to light. His curiosity has been piqued by Ben Stone and the more he spies on Ben and his movements, the more he’s lured into the belief that there’s “off the books” at work in his midst. And he’s not down with that. I’m delighted.

I could sense the good inside him and now the journey to the light has begun for our director in this episode of Manifest. Yes sir, episode 107 (“S.N.A.F.U.”) took us even deeper into the rabbit hole that is the passengers and what’s happening to them. And Vance, good chap that he is, seems destined to team with Ben, who has become quite the operative since his return.

Episode 107 offered us more clues into what may or may not be behind the strange episode aboard Montego Air 828 when this all began. And in this episode, we got a large dose of Ben Stone working the system and forcing open more clues that will, undoubtedly, need to be followed. Hello, Director Vance. Welcome to the thunderdome, baby. 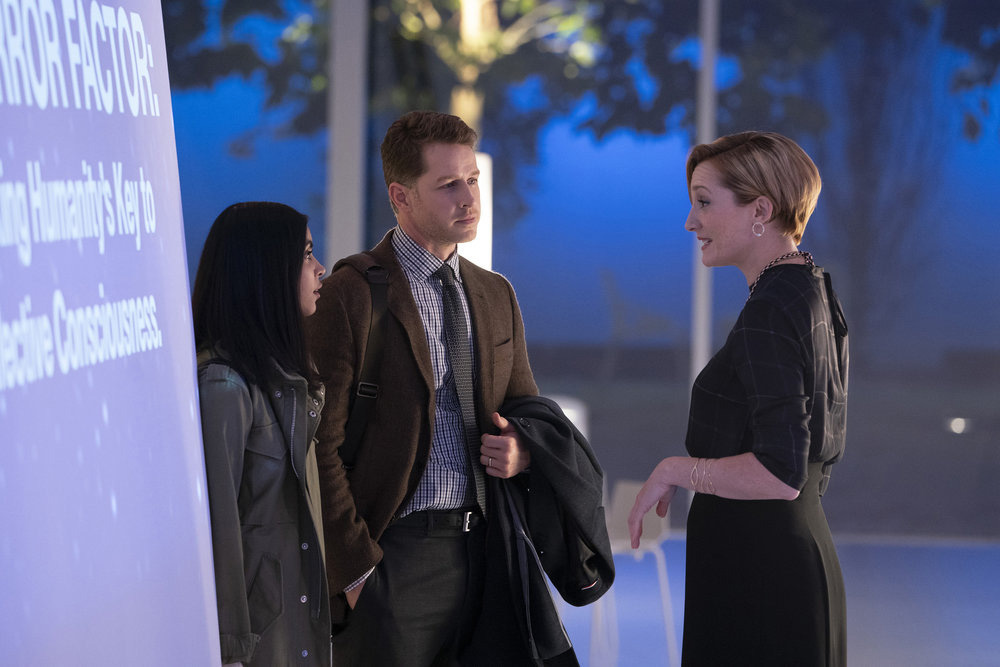 Think about it for a moment. In this episode Ben not only gets to have son Cal back at home (though Cal is still mentally hooked into Marko) and doing somewhat better, but hits on a scheme to purloin info about Unified Dynamic Systems by, get this, getting a job with a subsidiary accounting firm in UDS’s realm. Not only does he score the job (Natch), but he meets a Flight 828 fanboy who is his immediate superior, gets invited in the bro’s poker game, fries his access badge in the microwave so that his new best “bro” will give him his (higher access), hacks the computer system, uses the old “spill the hot coffee in the crotch of a work associate” to get deeper access to data, and is finally prepared to try and get away with a thumb drive of info.

Enter Vance to snag the thumb drive. He’s watching you, Ben. You need to be more paranoid, my friend.

I mean, that’s a lot of Josh Dallas working his Ben Stone magic for one episode. And yet I’m probably leaving some things out. Oh yeah, the Danny conundrum raised its head again, but that’s a whole other level of awkwardness at this point. There’ll be a tipping point there, so let’s just wait on that.

Back to Ben Stone…you rogue, you. Josh Dallas, I am becoming quite the fan and I want you to know it. I think JD has done a superb job of infusing Ben with the right amount of hope, desperation, curiosity and determined passion to find out just what the hell happened. As he told Michaela later in the show, he simply can’t make the leap of faith that “The Calling,” Cal, and the other things seem to require. He needs data, facts and a clear path to answers. 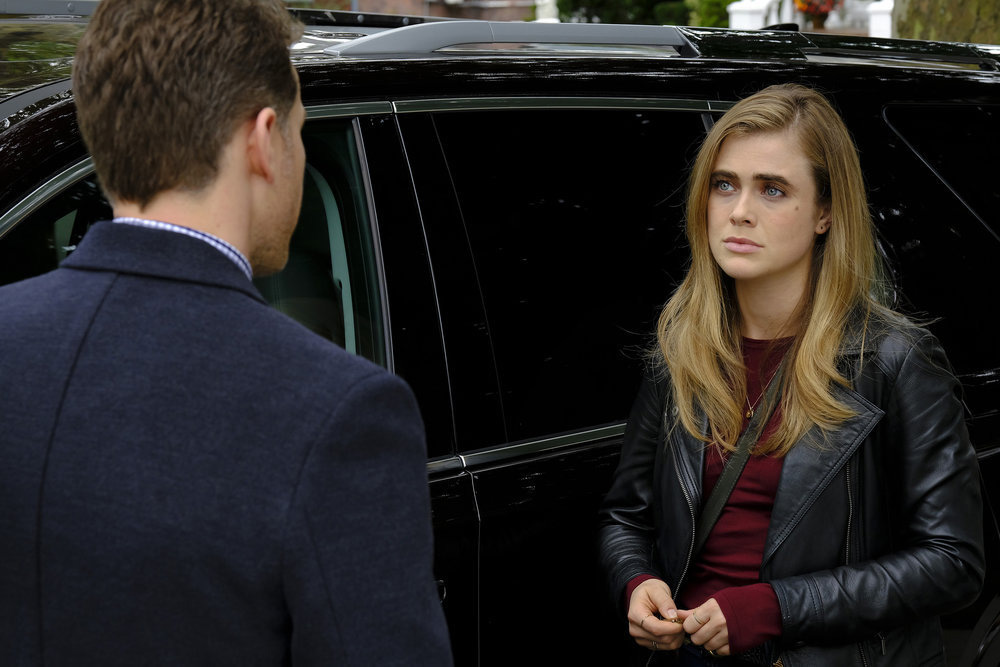 I think this character is a real pivotal one to the show’s current path and so much of what’s happening right now on “Manifest” runs through Ben’s determined presence. The beauty is that his mindset also comes with plenty of familial conflict that will have to work itself out eventually. That should be interesting. Will this whole thing drive he and Dr. Saanvi together as wife Grace seems to be continually pining for Danny? Quests such as the one Ben (and Saanvi) have engaged in often create lovers out of seemingly innocent mutual interest. Danny’s continued good-intentioned presence is an interesting component.

Grace and Olive obviously have a flag planted in the Danny mountain, emotionally. I can’t believe that’s not going to play out in an unpleasant way moving down the line. How many longing looks can Danny and Grace exchange before things start moving again? Just sayin’.

I found the encounter between Ben, Saanvi and the mysterious Fiona Clarke to be very interesting. Clarke, Saanvi noted, was a bit of an outlier in the scientific community, but found a ready audience in the spiritual realm. As she talked about the mind and the telepathic abilities she believed humans were capable of, the bells were going off everywhere right. “The Callings,” Cal’s mental tie-in with Marko, etc. Turns out Clarke was on Flight 828, too. And was later approached by an entity (SP) that offered funding for her research, etc.

Again, another interesting little clue to what’s been going on…or is it? I’m beginning to feel that the Manifest writers are offering us some Red Herrings from time to time to keep us on our toes. Clarke, despite her tie-in with a new entity called SP, may just be one of those. On the surface, she looks like she’s part of what’s happening. But perhaps it’s too obvious, to certain. Or am I looking a TV clue gift horse in the mouth? 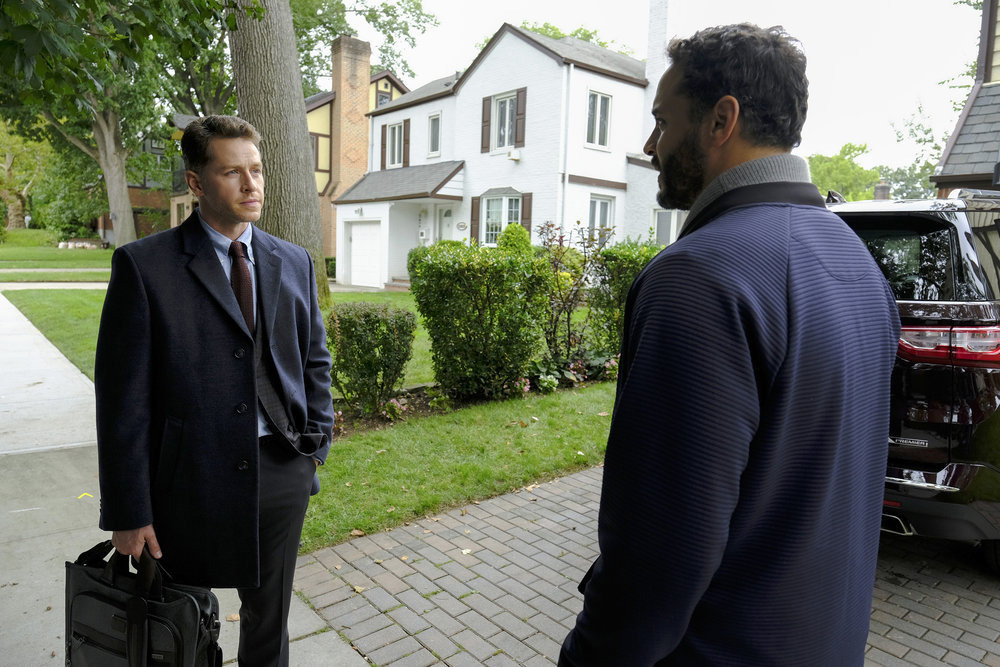 One of the things I’ve found interesting is that “The Calling” is manifesting itself in very different ways. It’s not simply hearing a voice, but also apparitions and in “S.N.A.F.U.” we discovered another way “The Calling” makes itself known — the feelof a heartbeat. Michaela was the recipient of this gift — someone else’s heartbeat within her — and it led her down an intriguing and poignant path.

Working to protect a young man named Carlos from making a tragic mistake after his uncle is shot dead in front of him, Michaela heeds the call of the beating heart within her to not only help Carlos make the right decision, but eventually collar the murderer while discovering some moments of healing herself.

Melissa Roxburgh simply killed this storyline as it developed, “Making the leap of faith” to believe in “The Calling,” regardless of how it manifests itself through Michaela in such a way as to not only root for her, but to feel joy at the final outcome. Her character has been so somber for most of this season as she deals with a ton of things. She felt defeated at times, but in this episode, we sensed hope and Roxburgh delivered that vibe nicely

The twist that Carlos had survived a heart ailment by receiving a heart transplant — via Evie’s heart after she’d died — was a tremendously satisfying finish to the story. And Roxburgh nailed the emotional moment head-on. That beating heart she heard and felt? Evie’s? 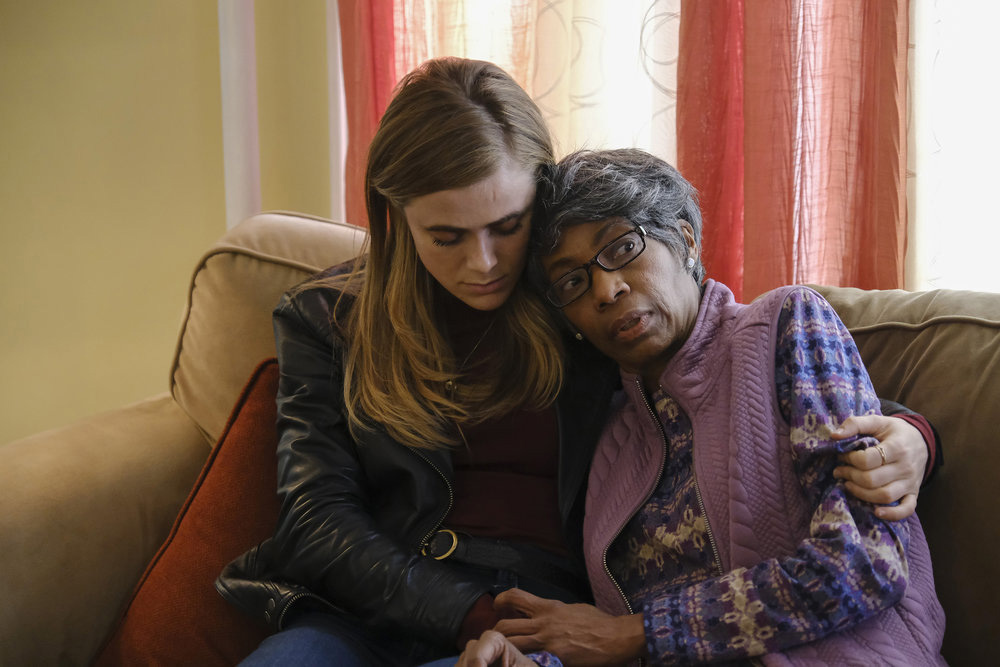 Roxburgh’s eyes told so much of the story there at the end and provided impetus for healing that we so obviously can see she needs. There was just a lot there, including Michaela’s time with Evie’s mother, that simply brought that story full circle. It was uplifting while also offering us an enjoyable and satisfying sadness. Sometimes it’s just good to realize sadness is part of healing, something Michaela has been struggling with.

All of which leads to the question about “The Calling” and its role in our passenger’s lives. There’s just a lot of questions that haven’t been answered — aside from the evil government agency that Ben (and Vance) are tracking — and “The Calling” is probably as big a one as there is. Is it God? Is it the mind being used to fuller capacity? Is it a government experiment with unintended consequences? Are aliens involved? And the list goes on and on.

I think this episode was the most “meaty” and emotionally telling episode we’ve had so far. “The Calling” not only helped someone, it brought Michaela to a place of healing and closure. Ben Stone has turned into an effective operative and the passion he’s building to discover the secrets behind all that’s happening was palpable in this one. Relationships continue to be in various states of repair, but with complications, and now Director Vance appears to be ready to join the investigative fray. Shaping up to be quite the ride to the end.

For my money, EP. 107 build wonderfully on EP. 106 in what has become a nice run of episodes for the new series. What comes next? Well, I’m at the point where anticipation builds nicely each week, which I take as a good sign for the show.