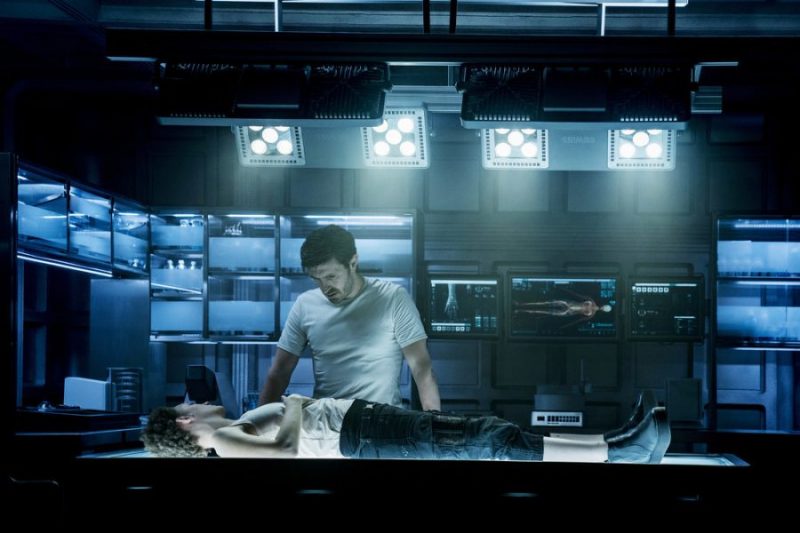 To say that Syfy’s first five episodes of “Nightflyers” offered a dark and dangerous prelude to what comes next would be a classic understatement. The major players aboard the Nightflyer all seem to have some kind of intrusive issue they are dealing with as the search for first contact continues.

What have we learned through the first five episodes, which ran consecutively on five days? We’ve learned that captain Roy Eris was not only piloting the Nightflyer into the void, but dealing with some pretty substantial mommy issues as well. Those issue cost the lives of a multitude of crew as the race to catch the Volcryn continued apace. Turns out Cynthia Eris isn’t as dead as everyone thought. 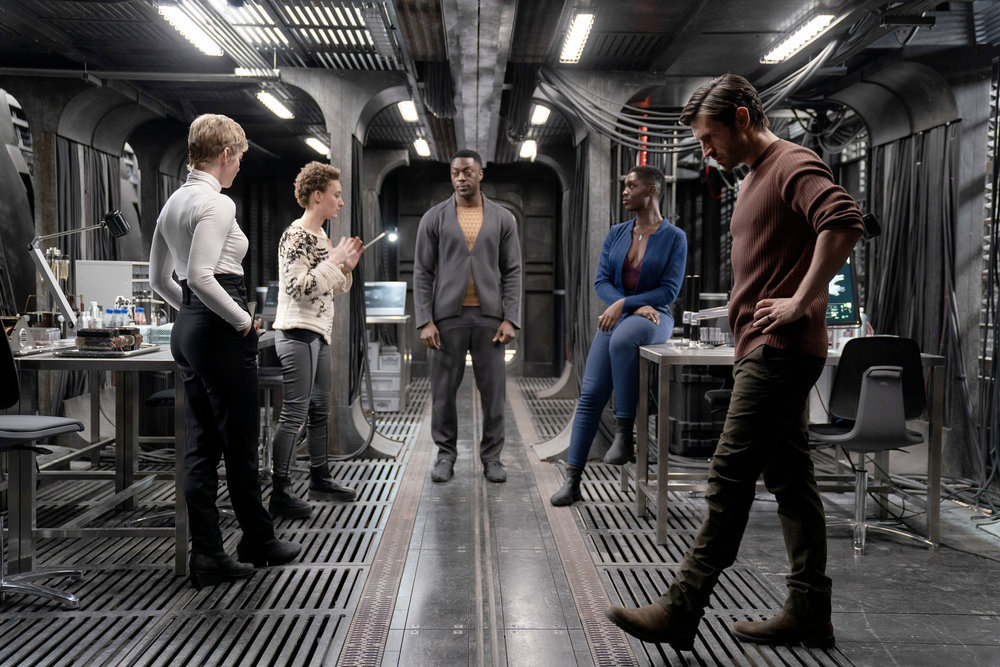 Sci-fi has dealt with AI and imprinted intelligence in machines for ages. So the little twist in the “Nightflyers” game was that the consciousness of Cynthia Eris was imprinted into the Nightflyer, making it much more of a living entity than anyone (except her son) could have imagined. His comment in EP. 1 about being in more danger than they could possibly imagine proved prophet as Spaceship Cynthia started raising havoc and racking up a body count nearly from the outset.

It’s clear that Cynthia didn’t want the Nightflyer to be able to make contact with the Volcryn, leading me to wonder why? In her level of AI consciousness, is she able to reach out and glean information that the ship simply cannot?

She wants the ship to turn back and I’m curious to know what she knows, or senses, about the possible ramifications of first contact. It’s easy to vilify the Cynthia character as evil and willing to spend lives so cheaply (by the way, taking over control of the laser spider was pretty cool — if you like seeing humans cut in bits. A nice touch, that.) But, perhaps she understands that which the rest of the crew, with the possible exception of Rowan, don’t grasp – that making first contact is a risky proposition at best, deadly at worst. Why wake the sleeping Kraken? 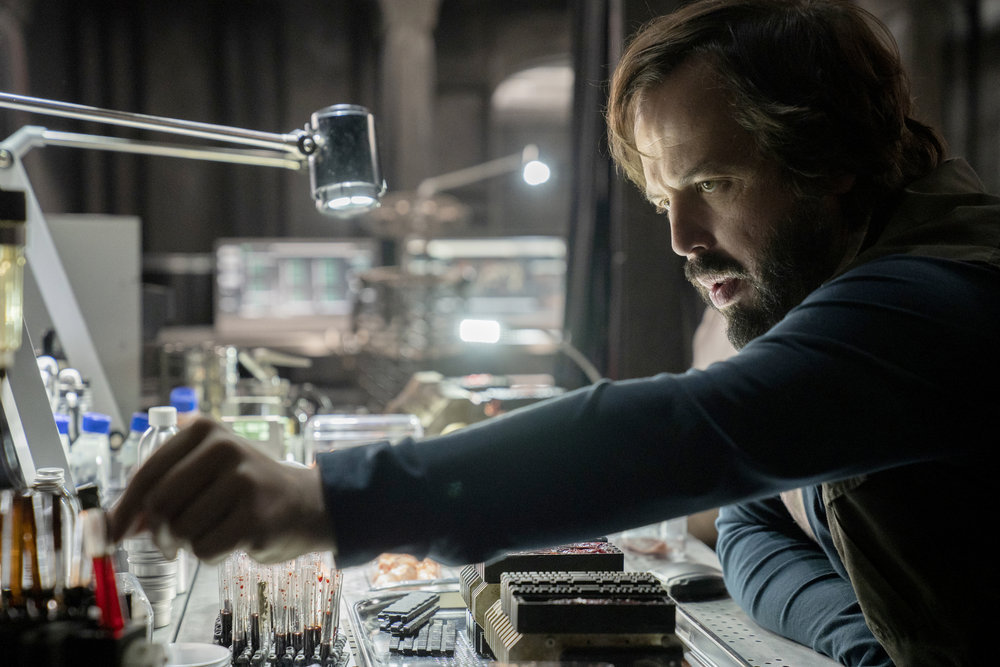 And that brings us to the eventual return of the White Rabbit probe to Karl D’Branin’s quarters. Talk about youthful excitement, I though D’Branin and Rowan were going to fall into a screaming hissy at the prospect of getting info off that thing. Again, there was a twist as the probe that was apparently returned via the Volcryn was now part living tissue – D’Brannin’s living tissue. Talk about an interesting twist, that.

I have to admit that at this point I was a little more on Spaceship Cynthia’s side at the reappearance of the probe, complete with D’Brannin’s muscle, flesh and teeth (?) embedded as part of the probe made we wonder if contacting them was the right answer.

D’Branin and Rowan couldn’t see to look past their scientific/mission-specific joy at this contact while I was more of the opinion that this may be a bit of a warning. Respect the tech, lads. The entity that could do this – send a probe back millions of miles and pinpoint it to D’Brannin’s room, may be an entity you want to give a wide berth to. I don’t know, I really saw this as more of a warning shot across the bow. 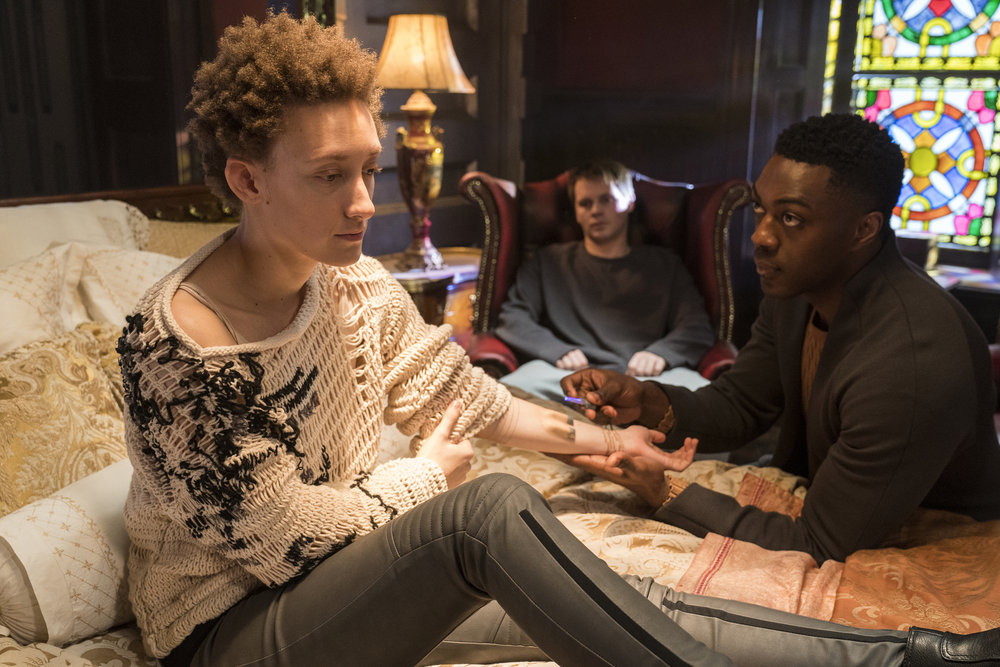 And so did momma Eris. So did her son. Something wasn’t right there and while others could sense it, Rowan and D’Branin were too giddy with anticipation to step back and perhaps hold the whole thing in awe and wonder. Nerds! I mean, the damn thing was bleeding all over the room. Doesn’t that tell you something, boys? A message? You think?

Still, the idea that some of the blood cells continue to survive is an interesting little oddity. Rowan reads that as perhaps the key to getting the Volcryn’s message, whereas I read that as “let’s infect the humans and see what kind of carnage can ensue.” But perhaps I”m just reading into this after the opening few minutes of episode 1.

Thus far, I’ve found “Nightflyers” to be a pretty dark, serious, taut kind of sci-fi offering – with a decent amount of blood spurt. There’s none of the subtle humor of “The Expanse” or the more overt fun of “Killjoys,” but a sense of foreboding that runs throughout this show from the first minutes of episode 1 to the final moments of episode 5. 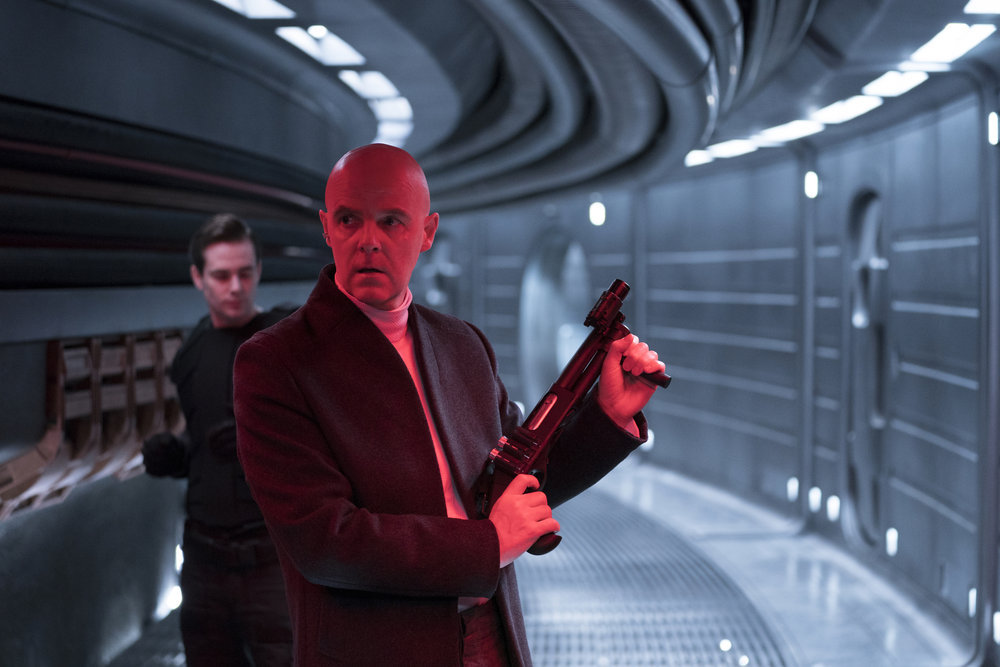 I also note that there are only rare moments when the ship seems to have much crew. Instead, we see a lot of moments where a lone body walks down empty halls or into dark rooms. There is a vibe of loneliness to “Nightflyers,” or perhaps the word is isolation. “Nightflyers” is a serious sci-fi drama that does a pretty good job of zigging when we think there’s a zag coming.

Yes, there are some classic sci-fi tropes bobbing around, but there’s enough good work being done here to set a vibe that keeps you wondering “what’s next?”

If you wanted fun and frivolity in the cold of space, this isn’t a show that will be in your wheelhouse. Things are serious aboard the Nightflyer and the storylines and issues we’ve seen so far bare that out. Bad stuff is happening and it seems that agendas aboard ship are not necessarily aligned. We aren’t done having trouble and conflict, I would guess.

It has been intriguing to watch Lommie and Thale develop through the first five episodes. I was delighted to see them team up for the takedown of Cynthia Eris in the computer system. Lommie seems to be emerging from a shell of shyness and quiet acceptance as she discovers her immense value to the mission and her place among the crew. 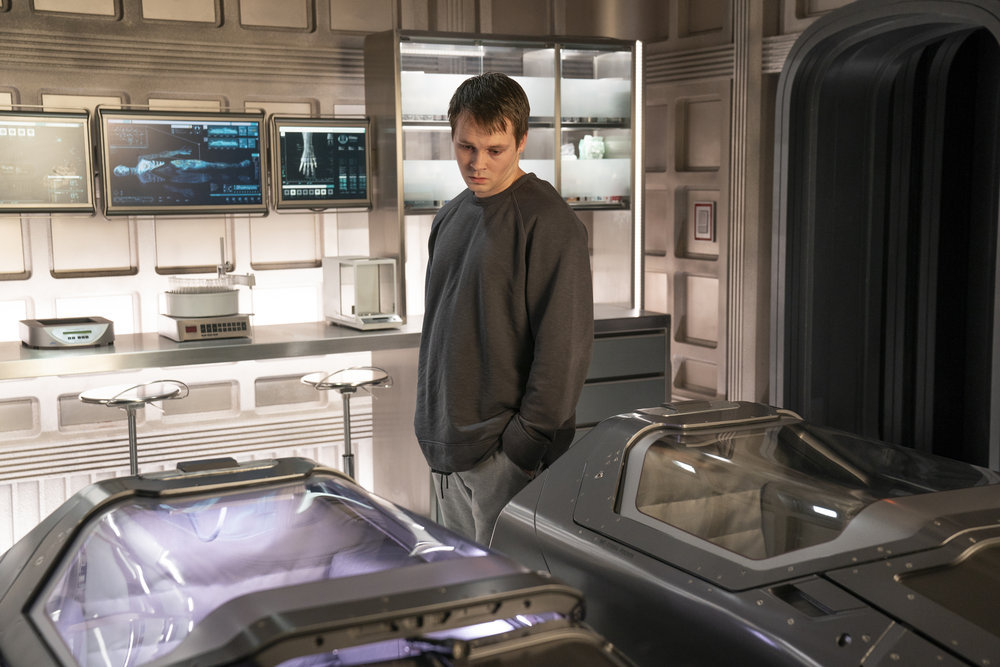 Thale, of course, represents the ominous unknown that so often frightens the ignorant – even today. Their tag-team foray into the computer to confront Cynthia and, ultimately, lock her behind a wall was an interesting trip.

Honestly, it felt like Lommie’s initial foray into the “matrix” was a waste of time as she seemed ill-equipped to deal with a dangerous opponent such as Cynthia. She seemed confused, frightened and I wondered where the strength and guile to confront this antagonist would come from. And that seemed to play out as she was easily trapped by Cynthia within the system.

But, we got a chance to see that Thale can bring something special to the party, and that Lommie’s understanding of how the system is configured, as well as burgeoning inner strength, were able to turn the tide. On the surface, you wouldn’t think characters such as Thale and Lommie would work well together, but I found their short interaction to be an interesting study and hope they get to work together more moving forward.

I’m hoping Thale continues to grow and mature, as well as gain more freedom above the Nightflyer as the season continues. I think he’s an interesting character with more than a little ugliness to his backstory. 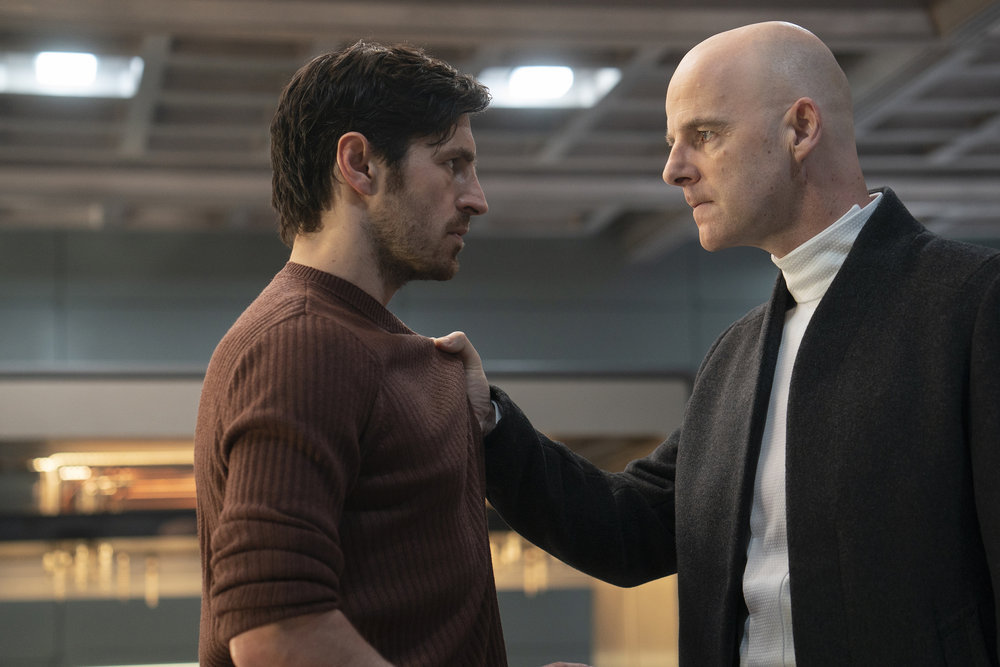 I’ve been waiting for the D’Branin-Dr. Agatha romance to bloom. And as we rushed through the episodes to this point, we could see it coming. And, with the revelation that Agatha once carried D’Branin’s child, coupled with his encouragement to his wife to have him wiped from her memory, the stage is set for some “love shack” fun and games. We’ll see where that goes, as well as the Melantha-Lommie relationship and the Melantha-Roy Eris kanoodling.

Melantha’s got a bit of an appetite, doesn’t she. And, she doesn’t mind people watching, it would appear, a development that, in the end, didn’t sit well with Lommie.

So as we head toward the second half of the first season of “Nightflyers,” we are faced with the prospect of figuring out what the Volcryn’s “return to sender” message really was and how it will ultimately impact the Nightflyer. I’m also curious about Auggie, who has been kind of a silent helper thus far, but seems to have some conflicting feelings about the mission. Then we find out why his affinity for the Nightflyer – he was in love with Cynthia. Does this make him an ally or enemy of the mission?

Overall, I think there’s plenty to like about “Nightflyers,” though I prefer my sci-fi with a bit of a lighter touch. Still, I binged the first 5 episodes in one sitting and even remarked to myself that I was intrigued enough with the stories to want to see “what’s next?” I think that’s a good sign moving forward.