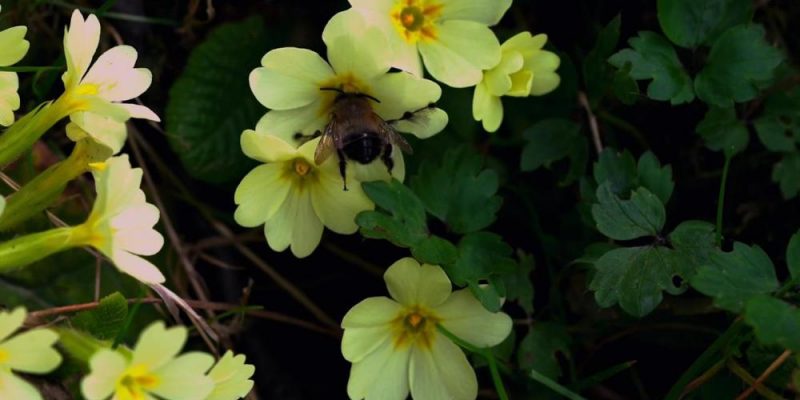 Outlander: Learn from The Birds and the Bees – Ep. 409 Review

There are times when I don’t really want to write a review, because the episode (and I’m not just talking about Outlander – I review other things) is just so bad, and I really don’t like saying bad things about shows I like. And there are episodes, like this one, that make me not want to bother writing a review. I think we all agree – most of us, at least, I’m sure – that this was a REALLY good one. So what more do I need to say?

One thing that helped this episode rise was the way it stuck, in great part, to the book. Why mess with something that was done so well already? There were some differences, of course – the rape in last week’s episode was so much more brutal than in the book, and while you can describe a rape survivor’s reaction, it’s never as visceral and affecting as seeing it up close. Sophie Skelton, who hasn’t quite convinced me in her portrayal, nonetheless was amazing as the grieving, beaten Brianna. After Roger was more of an ass than he truly needed to be in last week’s episode, she believes that he’s gone, and now has this fresh hell to deal with. And how heartbreaking it was to see her at the dock, learning that the Gloriana had set sail, giving her no opportunity to make things right with Roger. Seeing her recall the words on her bracelet, that he loves her “not at all” is what she fears. 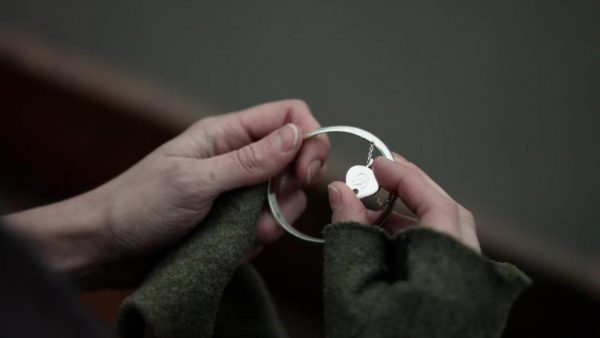 And Roger! I loved the scene between Roger and Bonnet. He plans to stay in Wilmington, to return to Brianna and apologize. But “Limb or Lass,” Bonnet tells him. Rik Rankin showed us how hard that decision was – go, and stay whole to return and fight another day? Or take your chances with a man who showed no hesitation to push a child out into the sea? Could there be a better choice for Bonnet than Ed Speleers? I don’t think so. 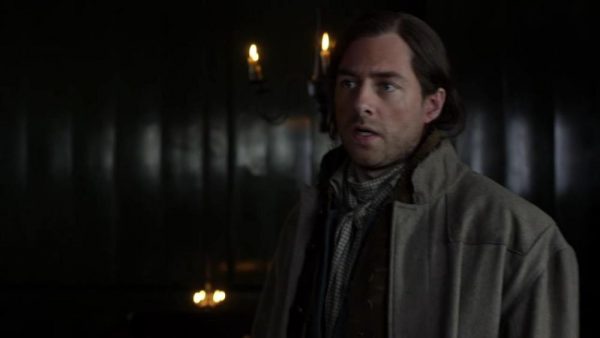 This episode was full of Big Moments, but the biggest – and one of the most anticipated of the season, I think – was the meeting between Brianna and Jamie. This could have been screwed up in a dozen ways, but fortunately Matt Roberts and Toni Graphia were at the helm for this episode. (I realize all the scripts are cooperative ventures, but they’re so uneven in quality that I can’t help but like certain writers, and dislike others.) And yes, we really did need to have Jamie peeing against the wall, or even that small detail would have been missed.

So what we got, and were thrilled about, was another stunning performance by Sam Heughan. Jamie may be the king of men, but Sam is the master of faces. So many emotions cross his eyes – irritation at being interrupted and propositioned, resignation to the interruption, disbelief, confusion, wonder, and joy. He’s already had one miracle in his life, with Claire coming back to him – how can he deserve this second miracle? But here she is, this child he has only loved in the abstract, warm and vibrant – and most likely shaking and crying – in his arms.

Her reunion with her mother was no less heart-rending. Claire, resigned to never seeing her daughter again, is, as Jamie predicted, “mad with joy” to hold her again. The little bit between Jamie and Claire discussing how they’ll avoid the fate that brought Brianna back 200 years, as they ride to Fraser’s Ridge, was a nice addition. They would have to be careful not to be in the cabin each year when the fire could happen, Claire says. “It’s not as simple as that,” Jamie answers. “We haven’t had much luck changing history.” 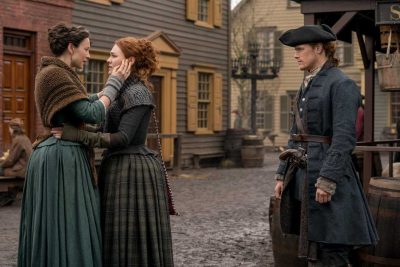 One scene that made me chuckle was when when Ian and Lizzie were chatting as they sailed down the river. “So… handsome,” she says quietly. Sure, she means Rollo. That’s exactly right. Oh Lizzie, you flirt. 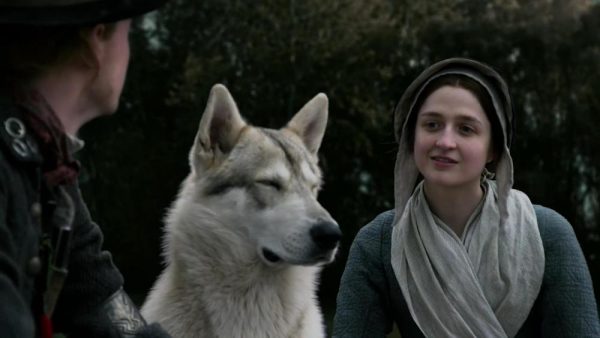 A note about the music – I love the new theme we’re hearing this season, the “Fraser’s Ridge” theme. But we’ve seen it used exactly the same way three times now: with Jamie and someone – Claire, Willie and now Brianna – looking over the vista and being completely enamored of the view. (Reminds me of another favorite show, Chicago Med – they have have one sound effect that’s used several times an episode, as they move someone from a gurney to a hospital bed, kathunk!) How many more times can we have this same scene repeated with slight variations?

It doesn’t happen too often throughout the series, that a piece of what was in the books is completely moved and told differently, but it has happened. And so I was really pleased to finally have the story of Dougal’s daughter Tabitha, the first girl Jamie kissed – “or the first girl who kissed me,” he says – finally make it into the show. Just another little homely story about Jamie growing up, giving Brianna a bit of background on her father – sweet. 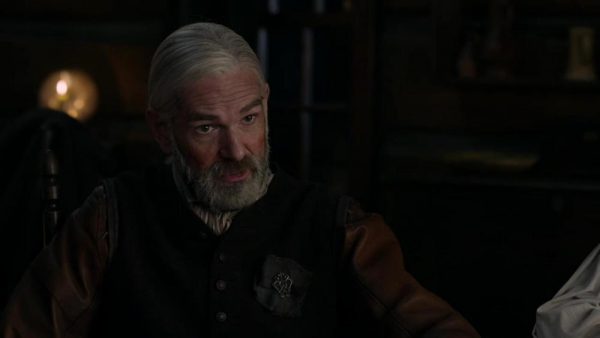 Under the category of “what did Frank know” – I think we’re learning that Frank knew more than we thought. Bree has realized it first – the obituary didn’t make an impression when she first saw it in Frank’s study, but when she found it among his papers, all the lessons he taught her – to shoot, as we saw with Jamie. Presumably he had been preparing her for her own possible step back in time – as Bree tells Claire, Frank knew that Claire had returned, so why not Bree? Layers on layers – it’s interesting how the show is moving this storyline further just a little faster than in the books. 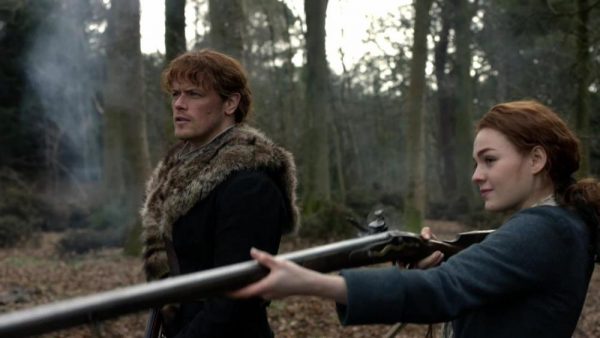 While I really did love the scene with Jamie and Bree “hunting” bees, it wasn’t at all subtle in the way it referred to the title (which, of course, makes all of us book readers think about Diana’s next book…). The actual bees, and the actual birds…. But the talk between them about the bees and their home had a double meaning, at least for Brianna.

In the morning, they’ll venture out, looking for the nearest flowers.

Won’t they realize they aren’t in their proper place?

Hm. What’ll they do about it? They’ve no means to find their way back and no home there to come back to. No, they’ll be content. Content, in their new home.

They have a home.

But the other BIG moment comes at the very end of the episode, and again, it really was BIG. Of course, Bree is pregnant. Lizzie saw her only with Roger, whose behavior wouldn’t have seemed odd to Brianna, but certainly looked aggressive to a complete stranger. So why wouldn’t he be the rapist? And Jamie, who has told Claire he is a “bloody man,” with a Scots’ quick temper, is furious at the violation of this precious daughter. So in this one episode, Sam goes from ecstasy to agony.

Poor Roger! But how would anyone know he planned to come back for Brianna? Had she known, they would have been on the watch for him. As it is, he’s not a beloved friend and handfasted husband – he’s a rapist come to claim his victim, likely in Jamie’s mind, similar to the way his grandfather, the Old Fox, claimed at least one of his brides. 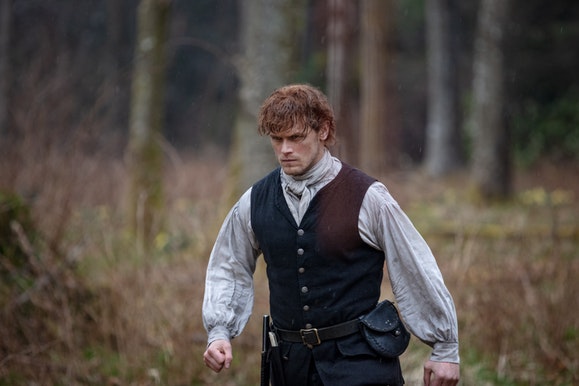 This was a great place to end the episode – what happens to Roger? (Well, we think we know, don’t we….) There’s still a LOT to come this season!

The Outlander Gab on the Air

Sure, I know that Tuesday is New Year’s Day…. but you’ll be home and not likely to move off the couch. Spend it with us on the radio! Sam Kraupner, Alyson Bailey (we hope) and I will chat about the last two episodes. Don’t make us talk to ourselves! Join us at 9 pm eastern/8 pm central every Tuesday night. This week, call in and tell us what you thought of these episodes, and tell us what your Outlanderesolution is! Go to our Live Radio page and click on the Listen Now link, or call in (the phone number is on that page) and chat with us!

And on that subject – while we’re having a lot of fun, and getting good feedback from those who do listen, we’d love to expand our audience. Could you take this poll and give us your thoughts (feel free to comment below!) about the radio show?

Thanks to Outlander-Online for the high quality screencaps!