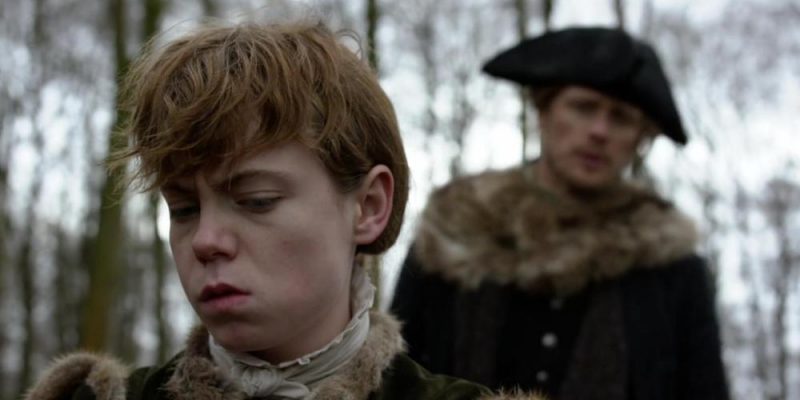 Outlander: Worlds Clash in a Face-Off – Review, Blood of My Blood

With tonight’s episode, I’m beginning to hope that season 4 has found its direction and tone. Two episodes in a row now that feel like one show! Another thoughtful, well-written, beautifully acted story that truly feels like it follows the ones before – and deserves our sincere admiration.

Lord John shows up at Fraser’s Ridge! Sure, it’s out of his way – a little more than a hop, skip and a jump from Virginia, his eventual destination. And with him is Jamie’s unacknowledged son Willie (excuse me, William) – why? What is the motivation behind this visit? Claire sure wants to know. She hasn’t been comfortable with Lord John Gray since they met in Season 3. But she’s trying so hard for Jamie’s sake to keep the peace! (And this episode was a definite reminder of why Caitriona Balfe received a Golden Globe nomination this week.)

And Murtagh is appalled that Jamie has continued a relationship – and a FRIENDLY one, at that, with their prison warden. Everyone was oh so polite at dinner – barely a mention of rats (a moment that was really cute, when William seemed quite interested – “you’ve eaten rat, sir??”). Taxes, now, that was a different story – with Jamie caught in the middle, Murtagh shows his disgust for John Gray’s friend Governor Tryon, building a “monument to elegance,” as John puts it, off the backs of the colonists, unjustly taxed. 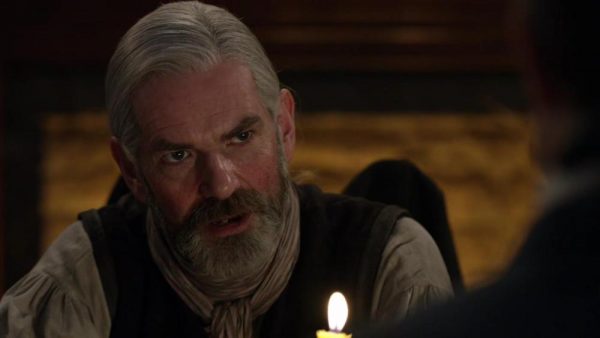 But the real star of this episode is Sam Heughan. From the moment he sees Lord John Gray, who he likes for himself, but loves for William’s sake, every emotion is on his face. You can see the question – “is Willie here?” And the fear for the boy in the scene with the Cherokee. Pride in his courage, sheer love and longing as they ride away. And they say Claire has a glass face…. Yes, Jamie can be completely guarded when the moment calls for it. But at his own home, surrounded by people from whom he has very little to hide, he can show those emotions and not worry that they will be misinterpreted or cause harm. And Sam does all of that exquisitely. 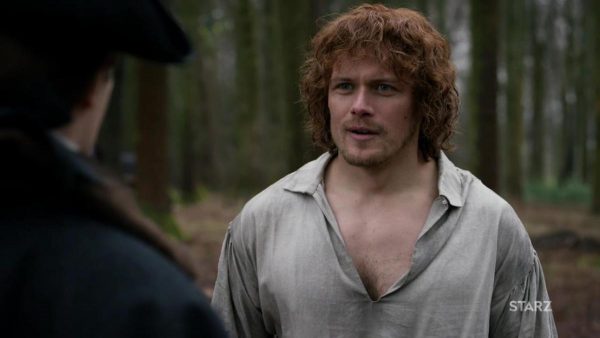 The pace of this episode – and the previous one – was slower than most of the Outlander episodes have been. That’s fine with me – there have been many times when I wished that things would slow down a little, so we could get some of those small scenes, those tender moments. Like in this one, where Jamie and Claire are talking quietly outside the cabin. The love these two have for each other is obvious, in a way that it hasn’t always been in the series (in Season 1, I wondered if non-book readers understood the love that had quickly become deep enough to make Claire choose staying with Jamie rather than go back to Frank, as she had been trying to do).

This is, after all, the story of a remarkable marriage, not an action thriller. Yes, we get enough heart-stopping moments throughout the show, but we’re not dealing with Jason Bourne here! We need those moments of character exploration – of Lord John saying he had been an “adequate husband” to Isobel in “all ways.” We needed to see Murtagh having missed so many years of Jamie’s life, but knowing him well enough to figure out – and quickly – that Willie was more than some Little Lord Fauntleroy (despite his haircut), and important to Jamie in a much deeper way. And we needed to see Claire and Jamie’s true devotion to each other.

There were several changes from the book in this episode, but much of the Claire/Lord John dialogue came directly from Diana. Their conversations, about Claire not being circumspect or circuitous, about Lord John coming to Fraser’s Ridge to see if he could still feel, couldn’t have been written any better than Diana did it, and I’m very glad the writers included those discussions. 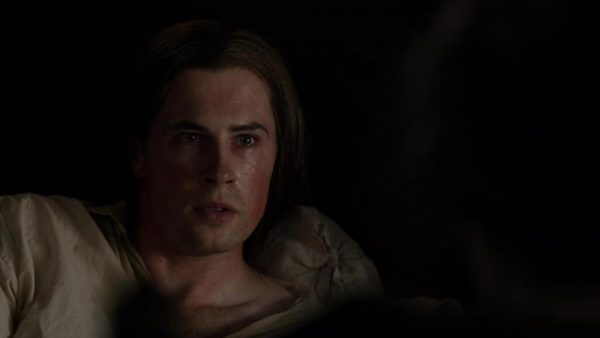 John’s confession to Claire was moving and emotional. David Berry is another amazing actor in an ensemble that’s full of them. And the current campaign to get Starz to produce a Lord John spin-off gives me a little pause – I have to say, I LOVE David Berry, and Lord John in the “big” books is one of my favorite characters – but I don’t really enjoy the Lord John stand-alone books. I’m not sure what it is about them, but I can take or leave them. However, should a Lord John series get going, I have no doubt that I would really enjoy it. So if this appeals to you, make sure you let @ChrisFParnell know that you want to #BringOnLordJohn!

The scenes with Wiliam, though, were a smooth blending of source and invention. (And while you may dread the “in the book” comparison, in a show like this, it has to be done.) I was always a little surprised, reading the book, that Willie didn’t remember Jamie. Childrens’ memories are not completely formed early on – I know there are a number of things that I’m surprised my sons don’t remember, and when I look back on my own childhood, there’s a lot that’s missing. But this isn’t that many years past the Helwater period, and the groom McKenzie was an integral part of young William’s life. So here we get William confronting Jamie – wasn’t that you? Why didn’t you acknowledge that? Why is this different? And why did you abandon me? in the wake of the loss of the only mother he has known, and potential loss of the only father he knows.

Of course this is going to bring up any other memories of the loss of love in his short life. “Why didn’t you turn around to look at me?” Jamie can’t give him the real reason – because he would have ran back and scooped him up, his heart would have broken, he never would have been able to leave. William is the only person in this episode from whom he has to keep this secret, and he is the one who most needs to hear the declaration of love that Jamie is trying so hard not to give.

In light of last week’s “Savages,” is it surprising that the Cherokee are on edge? I’m sure that’s part of Jamie’s concern, that there was so recently a major incident between the white settlers and the Indians, and relations are not at their best. So he warns Willie to stay on their side of the treaty line, but William is a little heady with the freedom of their trip, a bit rebellious due to grief, more than a little entitled, and, for heaven’s sake, a KID. And big surprise, he disregards Jamie’s warning. I loved hearing Jamie say, “He’s my son!” even if Willie will think it was a ploy to get the Indians to back off, or take the punishment out on him instead. At least, for once, Jamie got to say it. And it was wonderful to see William as a brave and honest young man.

Did you all choke up a little when William turned around, as Jamie hadn’t, while they rode away? “I didn’t want to give you false hope… I never expected to see you again,” is what Jamie gave as his explanation. In that moment, William was saying, “I hope we see each other again – this is my promise.” In the few days they spent together, William came to respect and admire Jamie – another strong man in his life. And I hope he was able to forgive Jamie for leaving him before. 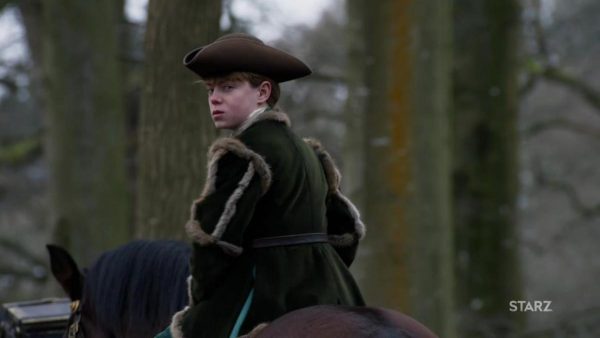 The only part of this episode that’s really left me a little unsettled is the bit about the ring (that looked really pretty, though, and now we HAVE TO HAVE IT). This really shouldn’t affect what we THINK will happen with Brianna, since that should happen before she meets up with Claire again. But if the story plays out the way it has in the book, what will that mean? Claire will have two rings? Or will this new ring mean that some different reason will cause the upcoming (hopefully) confrontations? It can’t be long now until we find out, based on the previews for next week, which was a little unsettling itself. 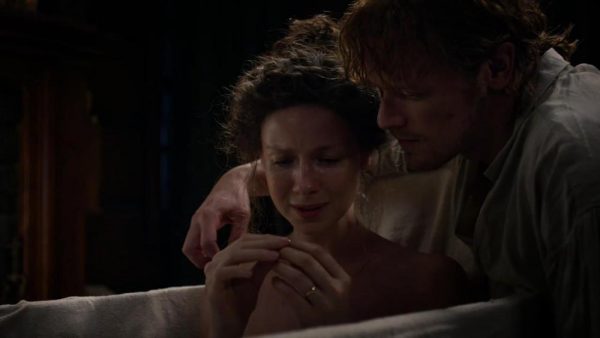 There were SO many moments that I could have touched on – the nod to a scene were hoping to see with Ian, William, a snake and the privy (and I sorely missed Ian this episode); William and Jamie looking over the vista into the valley; and more. But I really hope we’ve settled into a groove, and that the second half of the season will be a little more even than the first half. But I’m quite happy with two episodes in a row that were so wonderful!

The Outlander Gab on the Air

Planning a trip to Scotland soon? Have you been there, and have tips for others? Our special guest this week will be Gerry McMullan, of Carnegie Tours! How soon, ideally, should you start planning? What are some must-sees? What can a tour guide do for you – and what can’t they do? Call in and chat with us about your tourist experiences, and about this new episode! (We’renot sure at the moment if Gerry will be live or pre-recorded – the time difference means that it will be the middle of the night for him, and he’s expressed willingness to join us live, but that’s not for sure yet). Tuesday nights, 9 pm Eastern/8 central – click the Live Radio button at the top of this website to join us!

HUGE thanks to Outlander-Online for the use of their HQ screencaps! You can see all their episode screencaps, and the show’s latest news, here.