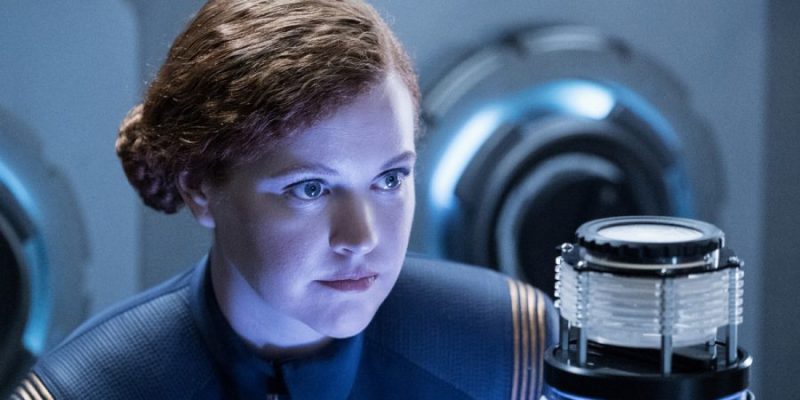 There is a lot you could say about episode 202 of “Star Trek: Discovery,” but in watching, then re-watching the episode, I was struck not so much at the minutiae that is often the source of reviewer revelry and discussion, but by the wonderful old-school Trek feel of this episode, “New Eden.”

And while this is likely just my feeling about the episode, it’s a strong feeling and one that delighted me to no end. I am a huge fan of “Star Trek: Discovery.” I have enjoyed the obvious resources that have been poured into the show (re: Money, dough, bucks), the fine writing, the odes to earlier Trek offerings, the wonderfully talented actors that inhabit the world, and the sleek and “now” look of the show from the very start. And while all that was present in episode 202, I couldn’t shake the feeling that “New Eden” was right out of the TOS playbook — and I thoroughly enjoyed it.

Yes, the red light phenomenon is still going and the Discovery, with Pike as acting captain, sets off to investigate another of the lights before encountering a distress beacon of some kind. And with that, we are tossed into that wonderful trope of first contact discovery. In this case, New Eden. And that discovery sets in motion a bunch of Star Trek issues that are always fun to watch a crew, any crew, try to navigate. In this case, Pike invokes General Order 1, which I’m assuming is the precursor to the Prime Directive in the decades to follow. Nice little touch, that. 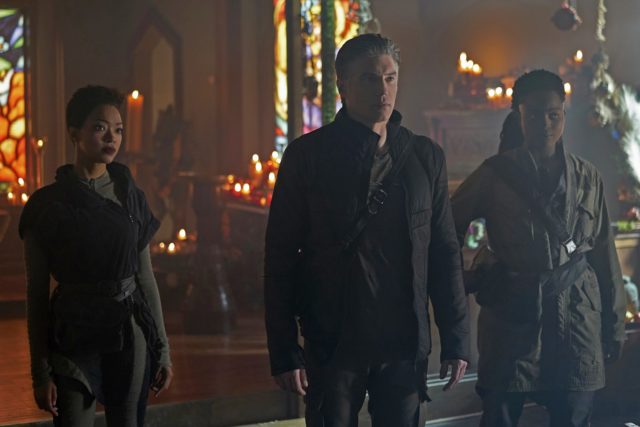 What follows is a landing party that tries to blend in. They discover that “New Eden” is a human colony that is more than 250 years old, roughly the time that the Third World War was going full nuclear and warp drive wasn’t possible. In short, there’s no way that colony of humans (which is still a non-warp realm) should be there. It’s a mystery wrapped in a riddle with a nice topping of faith-based interplay. The colony, in being saved, realized that religious tolerance was a must, so they combined elements of many religions into one. And it appears to be working.

It was interesting to me to see Captain Pike (Anson Mount is spot on in this role) immediately understand and even appreciate the concept of religious diversity melding into a faith that meets everyone’ s needs. Michael Burnham, however, struggles with what she sees as the landing party being insincere in the handling of the colony’s faith. She’s a woman of science and logic, something this colony and this faith don’t seem to fall comfortably into. The interplay between Pike and Burnham is interesting as they seem to kind of be feeling the other out in terms of mentality and personality.

There’s a subtle kind of awkward back-and-forth between them that is revealing. I’m not sure Burnham knows what to make of her new captain, while Pike seems to see the path ahead a little more clearly. 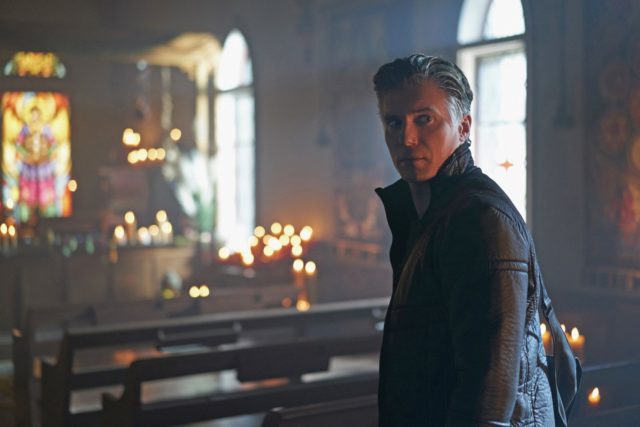 But getting back to my earlier point — the mystery of the new settlement, the landing party in plain sight, the question of how they came to be there (Angels in outer space?), that lone member of the colony who suspects there’s more to the new visitors (and the galaxy) than their humble settlement can understand, the inevitable threat to the colony, the quick thinking and innovation of the Discovery crew to save the colony, the lessons learned and a return to answer the questions that one curious man had about them — and that he was right all along.

Again, I enjoyed the heck out of this episode because it did harken back to the early Trek vibe of exploration, education, problem-solving, and the demonstration of the all-around talents of the men, women and aliens of the Discovery crew. Problems come up, problems get solved.

And when it was all over, Pike beams back down to pick up an old army helmet that had a video camera attached to it. It had been sitting there for more than two centuries, from the time New Eden’s ancestors were scooped up and deposited on this new world. What would it show? Would it reveal the secrets to the red lights in the starry skies? Would it show who had saved these people all those years ago?

Sure looked like an angel to me. Or at least an angel-like being that, in the glare of a bright light, saved these people’s ancestors two-plus centuries before and brought them to this new world, this ‘new Eden.’ An exciting revelation that, yes, offers not only scientific fodder, but perhaps a little religious vibe for us to speculate about. I also thought Pike bringing a power cell to the guy was a nice touch — and the lighting of the church after those two centuries of being dark — was a heart-warming moment.

Their ancestors had extra-terrestrial help in avoiding a nuclear holocaust all those years before, then unbeknownst to them, the Discovery had delivered them to safety a second time. Saving angels come in all types of species, it would seem. 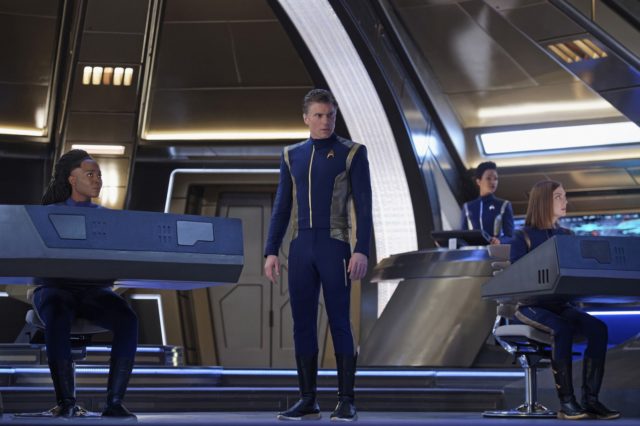 Captain Pike (Anson Mount) as the Discovery finds a human colony in episode #202.

Perhaps now the ‘search for Spock’ can truly begin to take shape. I don’t know, the idea that Spock checked himself into a mental hospital on his own, then didn’t want his family to know, seems pretty ‘Spockian’ to me. I will be interested to learn why he felt the need to do this and just what it is he’s seeking to get relief from. Is it as Pike suggest, “a question he couldn’t answer?” If so, what’s the question and how does it relate to the red lights in the sky? Should be fun.

I’ll tell you what’s fun right now, it’s the many and varied characters of this show that simply stand out on a weekly basis. Star Trek has always had it’s headline kind of stars, but I’ve always found that the reason it works so well is that those actors that swirl around the main characters offer such a diverse and interesting background that they tend to transcend the periphery to make us “feel” them completely. It’s wonderful, it’s ensemble, it’s a signature of Star Trek when it’s working. Here, it is.

There were great moments in this episode from Saru, Tilly, Stamets, in fact most of the bridge crew. And that’s something we see throughout this series — characters rising up to grab us by the arms and pull us in in a way we wouldn’t have thought possible.

In Episode 202, Tilly is a sight trying an experiment she should never have gotten into, then in early recovery from an explosion, then running through the ship to the bridge in nothing but a hospital gown — coming up with wild ideas and incredible calculations in that brilliant, exuberant, naive, optimistic, and strong-minded way she does. Mary Wiseman just hammers the many (often conflicting) qualities of Tilly episode after episode. Doug Jones as Saru is a revelation in terms of continuing to emote these wonderful characteristics of growth and change from this character over the first season-plus. I’ll say it again, no character has come as far as Saru on this show, though Tilly is running a hot second. 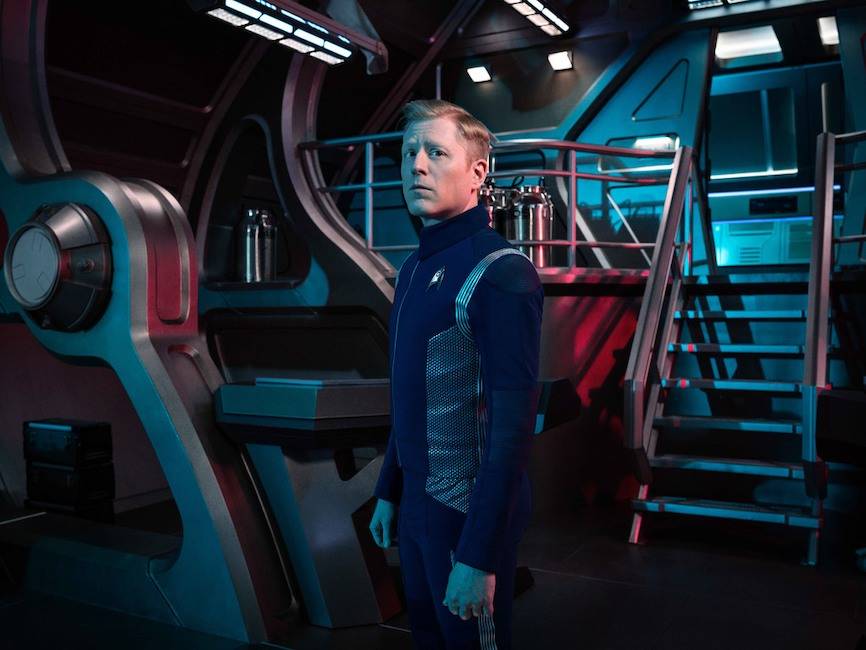 Paul Stamets (Anthony Rapp) continues to struggle with the loss of Hugh Culber in Ep. 202 of Star Trek: Discovery.

Paul Stamets continues to be a wonderful surprise each week. A man that seems to be on the brink of a total emotional breakdown one minute is able to revive himself and deliver intellect and ideas the next. Here’s a man that’s being eaten inside by the death of Hugh Culber, but spends a lot of time rebounding from what often looks very debilitating. Anthony Rapp is equal parts agonizing and exhilarating in this role. And the list just keeps going on and on (When do I get a L’Rell sighting. Mary Chieffo, I miss you) which makes “Star Trek: Discovery” such a multi-layered show.

Anson Mount is great. Sonequa Martin-Green is a delight as Burnham, but they are wonderfully supported by a cast that flowers so brightly in and around them that the whole is incredibly vivid and enjoyable.

Given that, there are some questions that beg answers. Are those red lights somehow connected to helping those in need of it? First two episodes would seem to be taking that path. What part will Spock play in all of this once his bearded self makes an appearance? What was that image on the soldier’s helmet cam that Pike saw and why wasn’t Burnham in the room? I thought that was interesting. And what of Tilly, who seemed to run into an old friend on the Discovery, only to discover that May (played smartly by Bahia Watson) had died some years ago.

Is this somehow related to the spore drive? Remember that Stamets said that he saw Hugh in the midst of the spore drive. Is Tilly having a similar reaction that is bringing May to life before her eyes? It was an interesting closing moment for Tilly and one I’m curious to see where it goes. I’m guessing the two are tied in somehow.

So in a nutshell, my look back at episode 202, “New Eden,” is one of enjoyment and a little nostalgia. No one else may view it as I did, but I got a nice jolt of TOS mojo from this episode, a little reminder of what Star Trek is all about on many levels. And I enjoyed that “Throwback Thursday” vibe. Now, what’s next?