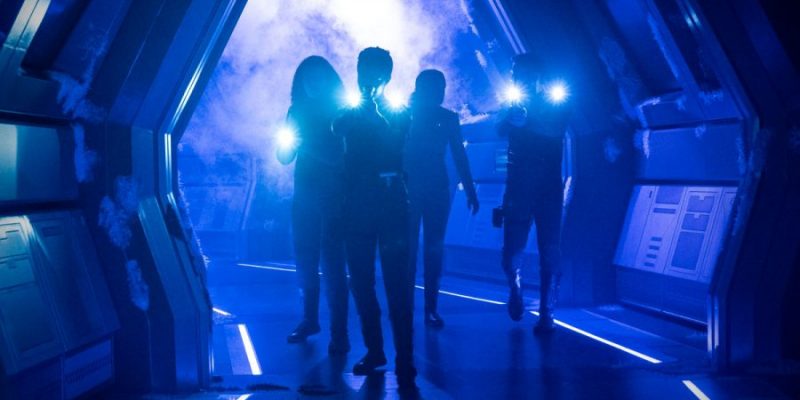 It was something of old home week on Star Trek: Discovery this week. We had some fun visitors return to the scene, one gleefully, one tortured, and one just happy to escape. ‘Saints of Imperfection’ was a wonderfully taut and nervy bit of storytelling by our Discovery team, one that opened some interesting doors for the future, while ramping up the tension factor just a tad.

But first, before I get fully into a look back at this episode, let me simply take a moment or two to reflect on the glory that is Michelle Yeoh as former Emperor Philippa Georgiou. Perhaps it’s simply my crush on her at play, but whenever she come striding through the doors with that sharp confidence and dynamic domination of the entire room, I can’t help but feel there’s a little electricity running through the scene. I felt it again in this episode as the Discovery chases down “Spock’s shuttlecraft.”

Once stopped and in the hangar, who should stride out like she was in total command of the situation but Georgiou. Spock had apparently left the shuttlecraft adrift and Georgiou, now attached to Section 31, was picking up the trail when intercepted by the Discovery. Yeoh imbues this character with a confident arrogance and haughty superiority that doesn’t come off as anything short of mastery of her domain, regardless of who’s in it. 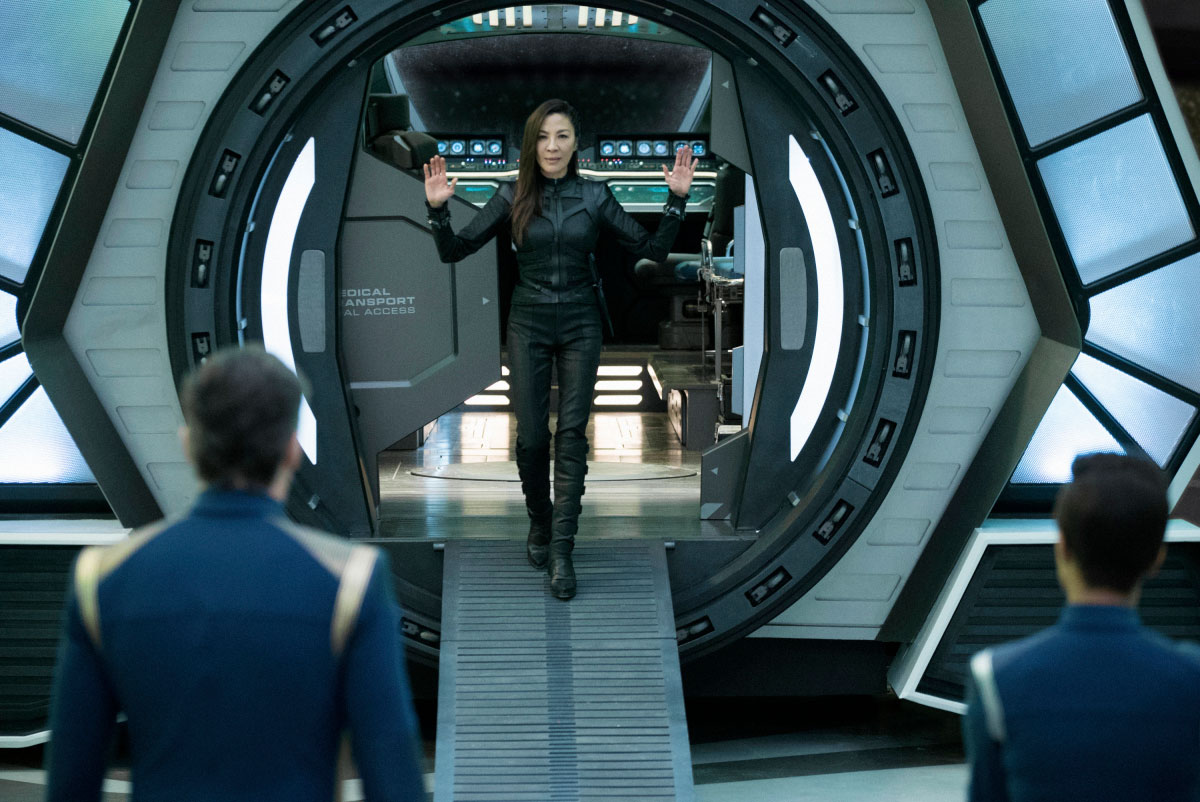 Now a member of Section 31, former emperor Philippa Georgiou, played by Michelle Yeoh, arrives aboard the Discovery in episode 205.

The wry smile, the flippant comment that cuts to the crux of the issue, the ability to size up the situation and the thoughts of those around her – just a master stroke of writing and acting for a character that lights up the screen for me. Given her general nature, it would seem that Section 31 is a glove-to-hand fit for our former emperor, though I don’t think for a minute she ever forgets that ruling and holding dominion over others is who she really is. If she’s in it, she owns it. Period.

When she and Burnham get together alone, the verbal thrusting and probing really begins and the tension is palpable. Though there appear to be a few other folks who know who and what this Georgiou is, it’s clear that Burnham’s association with her leaves her concerned. Yeoh and Sonequa Martin-Green create a wonderful tension as they walk the halls of the Discovery, Burnham trying to discern Geogiou’s motivations (Galaxy domination, of course. Sheesh) while Georgiou offers snippets of answers that may or may not be the truth. Wonderful interplay between two actors really on top of their game.

While Georgiou’s arrival was a fun twist, another fly in the ointment appeared when Section 31 appointed a liaison between themselves and the Discovery – one Ash Tyler. Needless to say, the tension with Georgiou’s appearance suddenly ramped up for Burnham when she beheld Tyler waiting to talk. 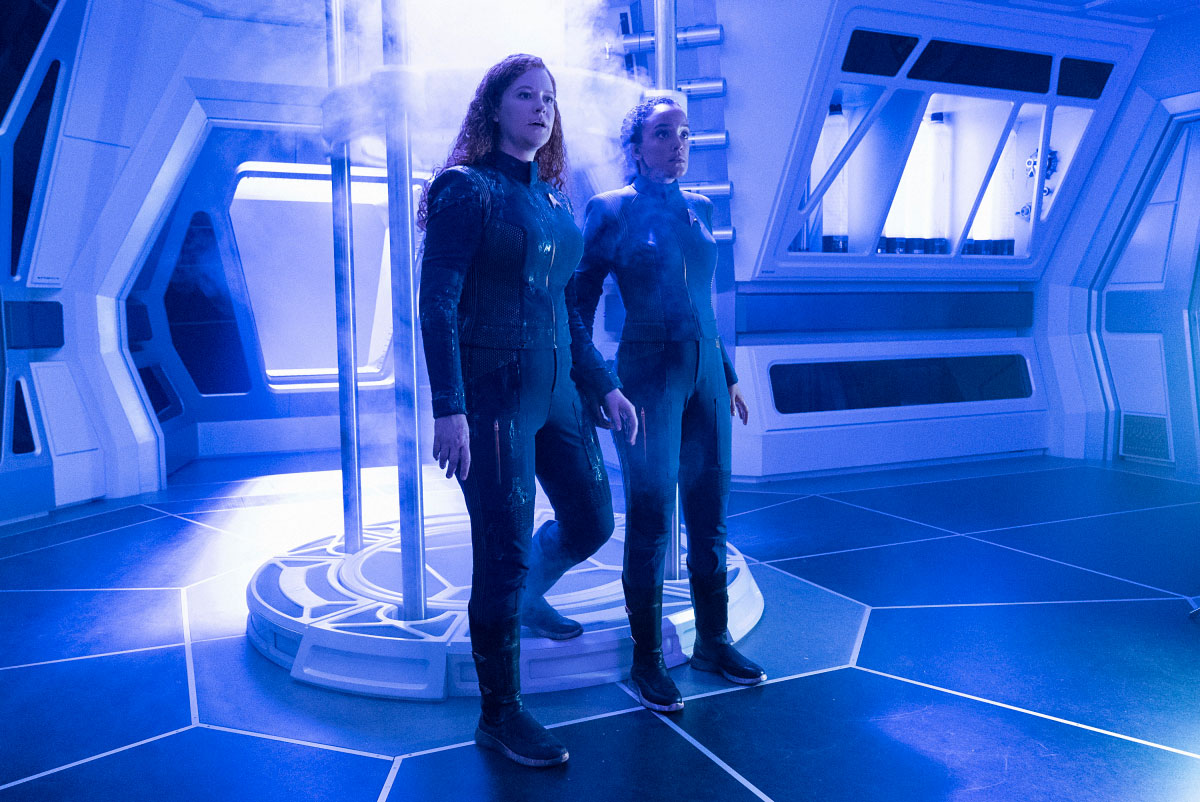 Tilly and May in the mycellial network in episode 205 of Star Trek: Discovery.

Tyler remains an interesting character to me – a being of two worlds, but sort of belonging to neither. Who he was will always be somewhat fused to who he is, and who he will be. Obviously, he’s gone Section 31 now and the liaison position was a good way to get him back on the Discovery. While I think he means well, I’m fairly certain he’s there to do more than observe.

The search for Spock is heating up and Section 31 appears to be heavily involved in it. Tyler a spy? I can see that. Section 31 with cloaking technology? Wow, that was a nice little reveal for Captain Pike, wasn’t it? But I’m getting ahead of myself, aren’t I?

So while Georgiou and Tyler make their presences felt, the majority of the episode revolved around the hunt for Tilly (Gads, I love Mary Wiseman. Ssshhh, don’t tell Michelle Yeoh). Turns out, the blob she was encased in was a mycellial type of transporter that whisked her to the network, where May was waiting. Turns out, the mycellial realm had been invaded by a “monster” and May’s outreach to Tilly’s mind was to enlist her in helping to defeat it. The paradise of the mycellial network was being destroyed.

Stamets’ role in all this, we find out, is that as he traveled the mycellial network, he opened a door into that world ever so quickly – and something found its way in on one of the jumps. Yeah, there’s a lot going on here, but it’s pretty cool. Stamets figures out that Tilly is probably alive and comes up with a hairbrained plan that Captain Pike notes “I hate,” that requires the Discovery to partly jump with the spore drive – essentially putting the Discovery half-in and half-out of the mycellial domain. 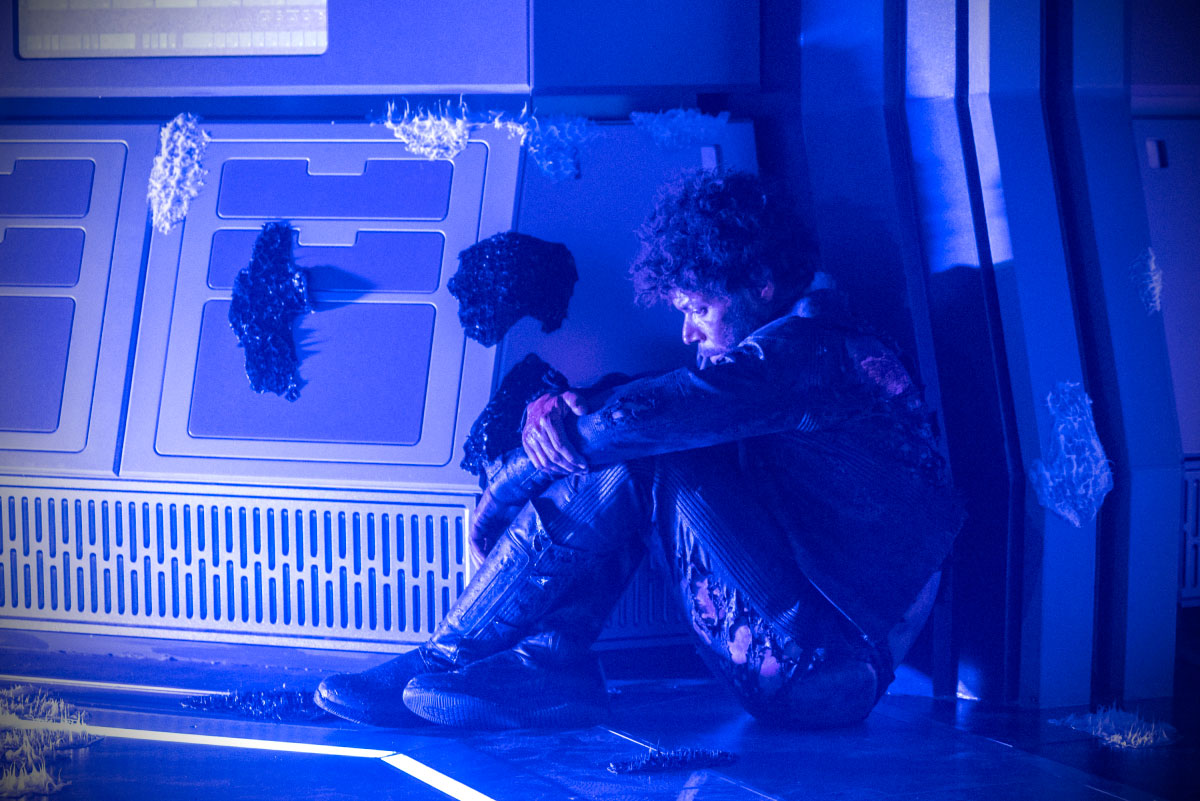 It’s a pretty cunning plan and Tilly figures out what’s happening on her end and we finally get Tilly and May joining up with Stamets and Burnham in the quasi-Discovery. Oh, meanwhile, the Mycellial entities are trying to devour the Discovery as it views it as a threat. Mmm, this hull  needs salt!

So, we got the Discovery being eaten, our quartet armed and looking for “the monster,” and, unbeknownst to us all, Section 31 hovering out of sight nearby. Oh, and Stamets has the reminder of Hugh’s death via the appearance of Ash Tyler on the bridge. Did I forget that part? Poor freakin’ Stamets. Can this guy ever catch an emotionally happy break? My heart aches for the guy.

But the answer to that question is – yes he can. Turns out the monster is a remnant of Hugh Culber that Stamets had somehow deposited in the Mycellial realm. In short, both Culber’s entity and the mycellial realm thought the other an attacker, hence the struggle between them.

It’s a wonderfully emotional moment, though Hugh looks like he’s just gotten back from a retro ’60s five-day rave. Still, with the revelation that Hugh is there, and the reasons the Mycellial plane is struggle, the fight to save him and the Mycellials begins. 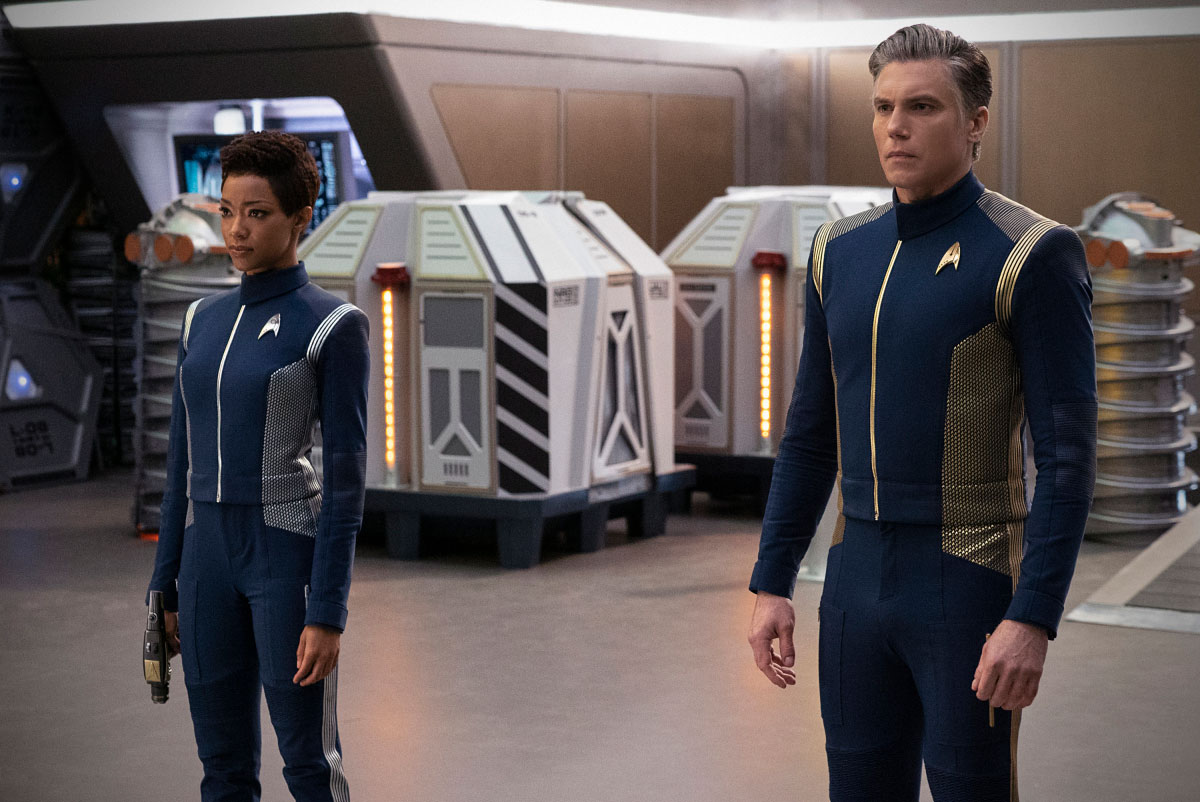 Michael Burnham and Captain Pike aboard the Discovery.

For my money, this is where the wonder of Star Trek never ceases as the gang quickly works through a hypothesis even as time is running out (remember, the mycellials are feasting on the Discovery). In the end, Stamets and group theorize that they can use the blob transporter still on the Discovery to safely (they hope) get Culber back aboard the Discovery. He can’t simply walk back through the barrier as the others can.

It’s an emotional moment when the plan works and there, in the slimy remains of the mycellial blob transporter, our couple are reunited. I will be interested to see if this Hugh Culber is the same man or something a little different?

Oh, and the Discovery is saved when, at the last critical second, the cloaked Section 31 vessel appears (courtesy of Ash’s call) and pulls their chestnuts out of the fire. Interesting that while the ship’s commander, Leland, is ready to pull the plug, it’s Georgiou who makes the call to do a little hot-wiring that will buy them more time. Is there goodness in the emperor’s heart? We shall see.

In the end, we get Tilly and Culber back, the reappearance of Tyler and Georgiou, and an uneasy working relationship between Pike and his friend Leland. Now that everyone’s back and safe, the time to really find out what Spock is up to begins. The show ended with shots of our cast in private moments, but I couldn’t help but notice that Pike continues to study the Red Angels. 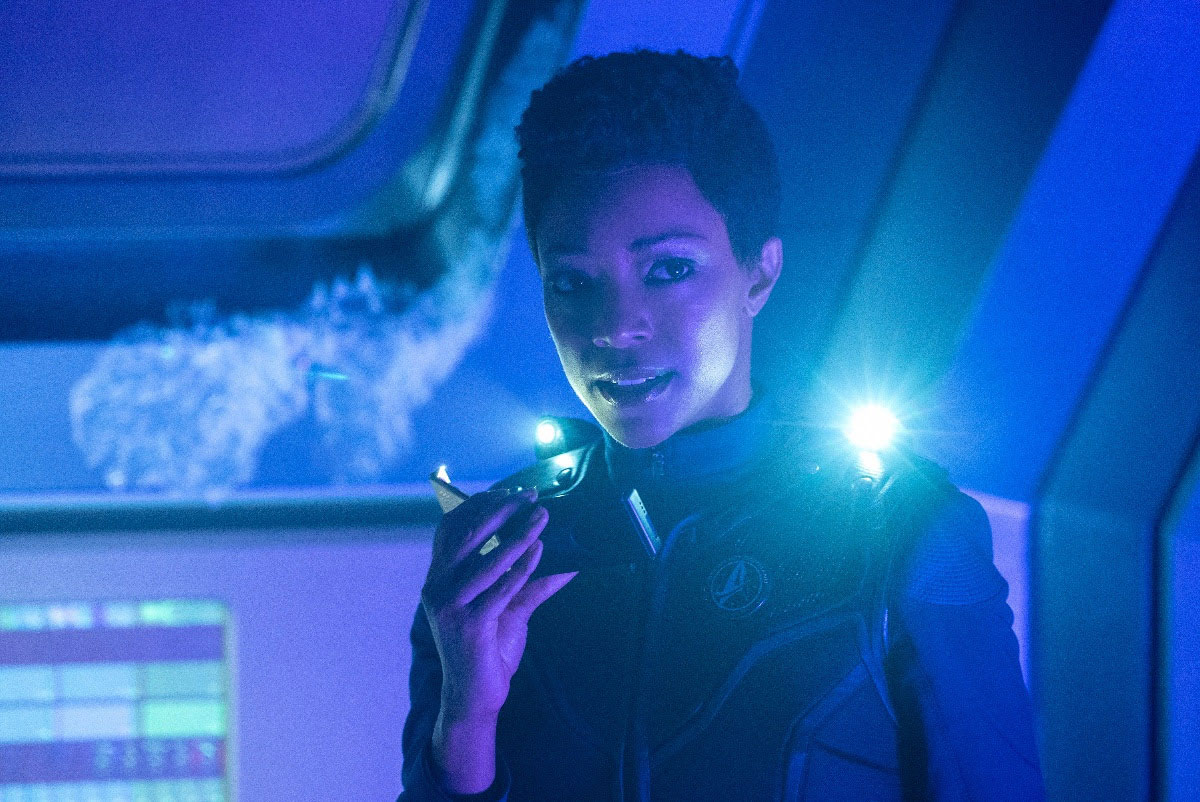 Michael Burnham communicates with the Discovery.

I wonder if he knows a little more than he’s letting on? Had he discovered something that, when coupled with Spock’s information, could shed some light on all this? And when will we get our first sighting of bearded Spock? Personally, I love the new look (so Bohemian) and can’t wait to see and hear what else might be new with a character we have so much history with. How will his reunion with foster sister Michael go?

Aside from the kenetic energy I feel whenever Michelle Yeoh’s Georgiou shows up on screen, I thought Ep. 205 was very, very good. The emotional toll of Culber’s death on Stamets has played out in subtle and overt ways for a while now. Anthony Rapp’s continued tremendous work in giving Stamets this pained emotional depth was paid off with the discovery and return of Culber. It was a great moment for a character that’s been in pain for a while. Well done.

Hard to believe we’re five episodes into this season and so much has happened and so much that we suspect or hope will happen is still before us. So far, Star Trek: Discovery’s second season has been an successful adventure. And I’m hungry for more.