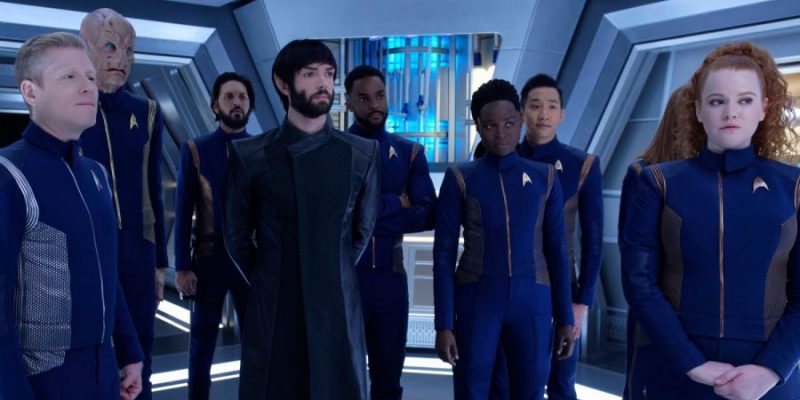 Star Trek: Discovery’s penultimate episode, “Such Sweet Sorrow,” certainly had plenty of that, didn’t it? Tears were spilled, goodbyes were said and the very real feeling that, as we head into next week’s season 2 finale, much of what we underwent this season is going to change in season 3. Personnel changes? Most assuredly as Anson Mount will not be back as Captain Pike. But what else, I wonder, will change for our family aboard the Discovery?

I won’t bore you with a long-winded review of this episode as its purpose was abundantly clear – get us ready for the finale. But what an enjoyable, emotional and poignant episode as we see the lead-up to Michael Burnham once again being willing to put herself on the line to try and save everyone. Her DNA is the only one that will work in the Red Angel suit and, as we find out, it’s most likely future Michael that’s sending those red signals to the Discovery crew.

Spock was so very correct about his sister, she is almost annoyingly selfless and willing to step into the gaping maw of disaster to save others. So the plot is simple, put on the Red Angel suit and drag Discovery (and the sphere of information that Control so desperately wants) into the future where Control can’t get at it. Simple, right? We shall see how that all goes in the season finale as the Section 31 ships, now controlled by Control (nice symmetry with that, right?) comes bearing down on Discovery and Enterprise looking for a fight – and the sphere data. 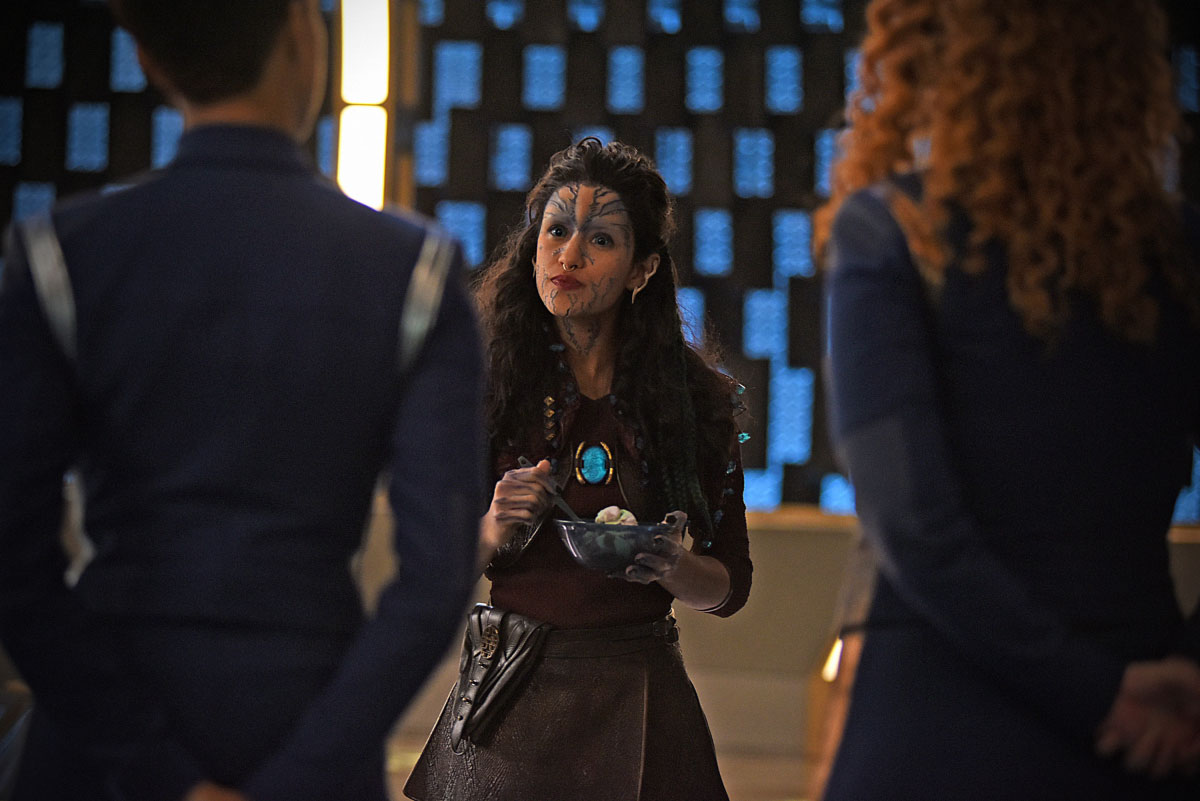 So much about “Such Sweet Sorrow” touched me. It was great to see Queen Po back with Tilly. What a silly and wonderfully brilliant pair they are together, and the writers did a nice job of incorporating not only the reunion with Queen Po, but her knowledge and ability into the plan they were hatching. Again, the red signals brought Discovery to her planet for a reason and as the episode moved ahead, we understood way. Those signals have to be from future Michael Burnham, right? I’m trying to wrap my head around the whole idea.

We got a nice moment between Hugh Culber and Paul Stamets that felt like the final move toward a break-up that won’t leave lasting bitterness. They both got to say what they wanted to say and it feels like this relationship, at least for the foreseeable future, is over. We shall see. Again, Wilson Cruz and Anthony Rapp really do some nice work in scenes together. I’m not an overly emotional type, but I admit (and I tweeted this out) that I found their moment together in this episode to be pretty poignant. Good work by both actors.

Any scene with Jet Reno (love you Tig Notaro) in it is a good one, but even here the fast-thinking, quick-witted Reno seemed to sense that things were about to change drastically. Oh sure, she delivered a few nice lines, but there’s always been a pragmatism to this character and we saw that again in this one. Some honest comments to Stamets and Queen Po, but also a selfless act of her own with the time crystal. She appeared to see some level of destruction, so we’ll see how (or if) that plays out in the finale. 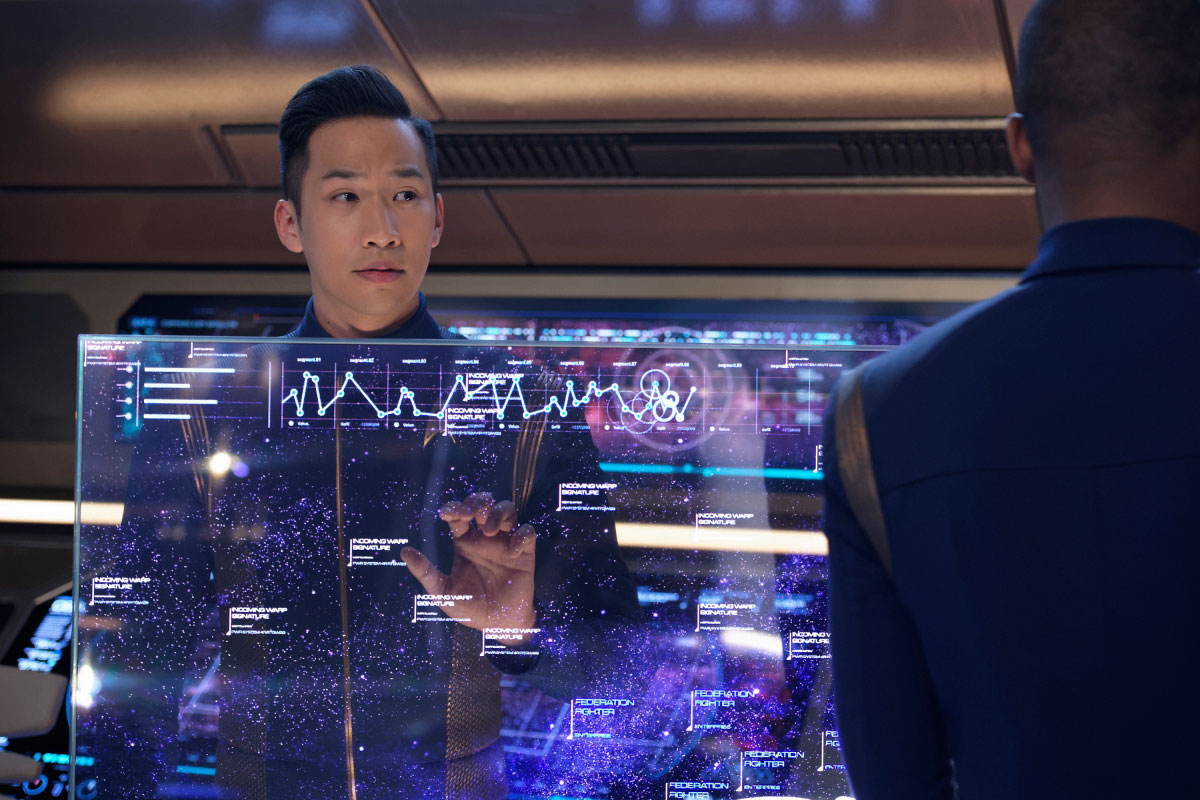 I don’t know about any of you, but the whole arc of Pike leaving the Discovery and coming back to the Enterprise was pretty special. I couldn’t help but notice the elevator doors made that telltale sound as they opened and closed on the Enterprise, once again giving us that wonderful TOS tie-in. It was a nuance, but a splendid nuance that ties the two shows together. I even liked the modern take on the old bridge of the Enterprise. Enough of the classic look to satisfy, but also some nice modern touches as befits a show being made for 2019 rather than 1967.

I will miss Anson Mount when the season is over. I think he’s done a remarkably smart job of giving us more layers to Christopher Pike. For what it’s worth, this is a character that has played out in some interesting ways in Star Trek lore, so it wasn’t simply a matter of putting on the uniform and calling yourself Pike. And I have thought from the beginning that Mount really brought life to this character and gave us some backstory that was valuable and entertaining. Kind of a somber feel, though. We know and he knows what his life will be like down the road.

Talk about giving this character strength, bravery and honor. Mount brought that to life and I’m tremendously grateful for his work here. Also, nice wink to Georgiou when you were beaming out. She told you she was from the mirror universe and Pike gave her the “what mirror universe?” line, a wry smile and wink. You knew it all along, didn’t you, Captain? Nicely played. 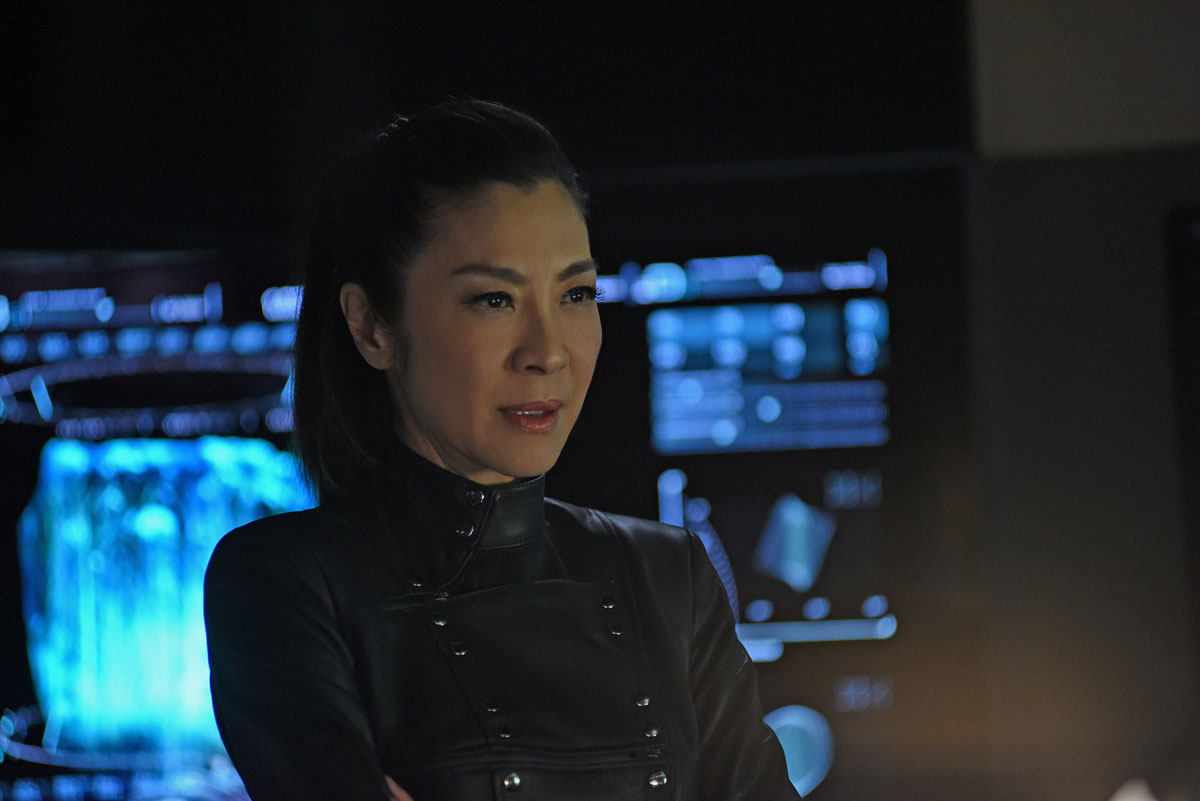 Ash, Spock, Burnham, Sarak, Amanda Grayson, Saru and others in the crew all had their moments to come to grips with what was about to happen and say goodbye. And in the end, most of the bridge crew elected to stay with Discovery and help ride it into whatever future Burnham will be able to pull them into. I found that excitingly poignant as well.

The underlying theme of this show so far as been family — dysfunctional, disobedient, on the lam — it didn’t matter. These people showed time and time again that not only could you count on them to do their jobs and do it well, but you could count on them to give of themselves in magnificent ways – the way family members do.

We got a full taste of that when Saru, Bryce, Owosekun, Rhys and the others stood shoulder to shoulder with each other in kinship with Michael Burnham. It was kind of a magical moment that’s tinged with a tragic vibe, but one that certainly brings home the “family” element in Star Trek: Discovery.

So here we are. Section 31 ships are at the door and we’ve got the spore drive heating up, a time-jump suit awaiting the right DNA, and a big fight about to commence that will involve the Enterprise. It sounds as though Enterprise will be the lead blocker on this as Michael and Discovery get clear to make the run through the time opening. We’ll see how that goes. Now, it’s important to remember that Control is pretty darn impressive in terms of anticipating moves, so my gut tells me our bad little AI will have something clever up it sleeve….er, electrodes?

The season 2 finale is upon us. And what a ride it has been to this point.