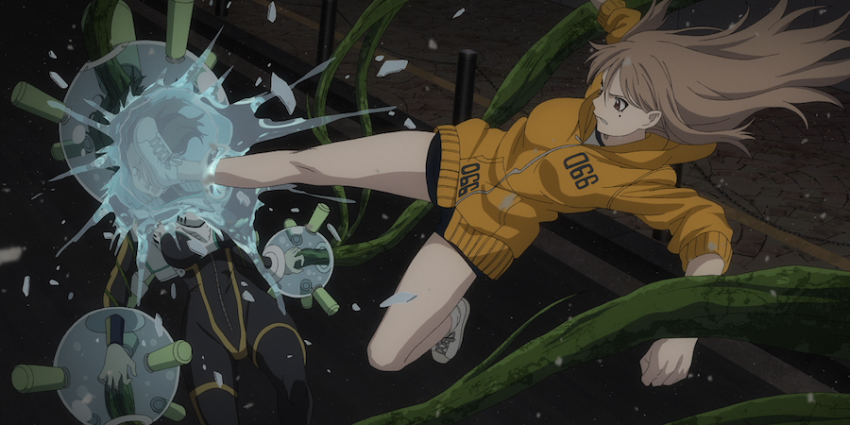 Sometimes a simple heroes versus villains story is nice to have in a sea of more complex story plots that pepper the anime scene these days. Tokyo ESP is just one such anime that while having an un-complex story is still fun to watch.

Rinka is a high school student in Tokyo trying to make ends meet while supporting herself and her father. Her ordinary life takes a turn for the extraordinary when she witnesses a penguin and a school of fish flying through the air. After catching up to one of the fish, she passes out and wakes up to find herself suddenly granted supernatural powers. With her newfound ability to walk through solid objects, Rinka is about to learn just how transparent the world can be. From the creator of Ga-Rei-Zero comes an adventure that shows how out-of-the-ordinary abilities of high school students can send a powerful message to evildoers the world over.

Tokyo ESP was re-released in the Funimation Anime Essentials line. Along with the classics line, these are equivalent of Funimation’s previous S.A.V.E. line of products. The tag line is Collect More, Spend Less. With the essentials line of anime, you can pickup these titles at a reduced price on Blu-ray and Digital. So if you didn’t pick it up before, you should now. You can pickup the complete series of Tokyo ESP over at Funimation.com. You cannot beat these deals!

Supernatural powers are not new to anime but the method in which these powers are given in Tokyo ESP is a first for me, flying golden fish! Those granted these powers are called Espers. That name sounded familiar to me and that’s because its been used in many other anime and manga before. The term describes any individual with telepathy and other similar supernatural powers. The series starts us out in the middle of an all out war and by the second episode starts back at the beginning of how our team of heroes ended up teaming up together.

The story later explains the fish and how it all came about in an interesting biblical tie in using the arch of the covenant. The series had a lot of connotations of a young version of X-Men. Each of our team members comes into their powers and hones their skills. One of the more interesting bits occurs at the end of the series. Two mysterious third parties show up in an effort to get the arc but miss their chance. The series never explains who they are. We left to believe perhaps they are beings sent to protect the arc and take it back out of the hands of man kind.

This is a series that ends with an open-ended finish, not a cliffhanger at all. There is certainly more story to tell. We hope the manga continues and that we might see a second season of the anime at some point in the future. Overall the series is not a masterpiece by any stretch. The story and characters are believable for their age’s and situations. Some characters are just off the wall with no real explanation (panda master, flying penguin, mystery third parties at the end).  Spending the entire season going back to tell the back story leaving us with only 2 1/2 episodes in the present time that we started with is disappointing. This is why we would like to see more.

Tokyo ESP is fun enough to enjoy the 12 episode series. If you need a hero story that doesn’t require a lot of thinking, you should enjoy the series. If I had to pick a super power from all the ones we saw in Tokyo ESP I would have to pick Ayumu’s Pre-cognition. Though I would like it to be more than a few seconds into the future :).

Check out Funimation.com to watch the series now or purchase it over on Amazon.com.

Tell us in the comments below which super power you would want to have and why!