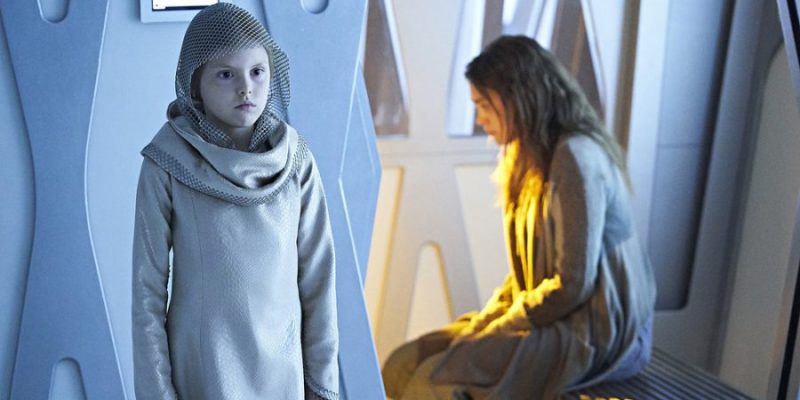 As with so many things about Killjoys, the “plan” often doesn’t go to plan. Episode 502 of Killjoys, “Blame it on the rain,” took us one step closer to the finish of the series, and one step closer to the inevitable showdown between all of our heroes and The Lady, who apparently doesn’t mind changing skin-based wardrobe in the middle of the day – in a yucky way.

Dutch is on “wake up” call, while Zeph wonders why a duct tape bandage should be so stylish, all the while The Lady continues to implement her plan for terra-forming Westerley for something – possibly something with tentacles? Uggh, let’s hope not. So let’s delve a bit into Episode 502 and see what we can discern from it all.

However, this is where I shout SPOILERS, WILL ROBINSON, SPOILERS! If you haven’t seen episode 502 and don’t want SPOILERS, you should flee from this screen immediately. Barring that, let us get this Killjoys party started.

One of the things that marked episode 502 was the return of two favorites we didn’t see in 501, Turin and Fancy Lee. Turin, it turns out, is a greasy-haired street dealer, while Fancy Lee is a cop who may have had one of the best runs of dialog of the night. As the search for Dutch heats up, we see Fancy getting ripped off by a quick-handed Dutch in the streets of Old Town. Well, he suspects his partner touched his butt, which created these nuggets.

“Hey, why’d you grab my ass.” “It didn’t grab itself.,” Fancy tells his companion, who quickly notes Fancy is not his type. To which Fancy says “I’m everyone’s type. It’s a curse.” And finally finishes this golden moment off with, “Hey, sexy people have feelings, too.”

Oh, Fancy, you are a chocolate kiss wrapped in truffle chocolate, bathed in more chocolate. And while we see Fancy working for “The Lady,” Turin coins one of my favorite nicknames of the whole series when he refers to Zeph as “Stinky Raincoat.” Oh, talk about another golden moment. Hear that, Kelly McCormack? I think that needs to be on a T-shirt with the back saying something like “I science the shit out of stuff.” Just a suggestion. 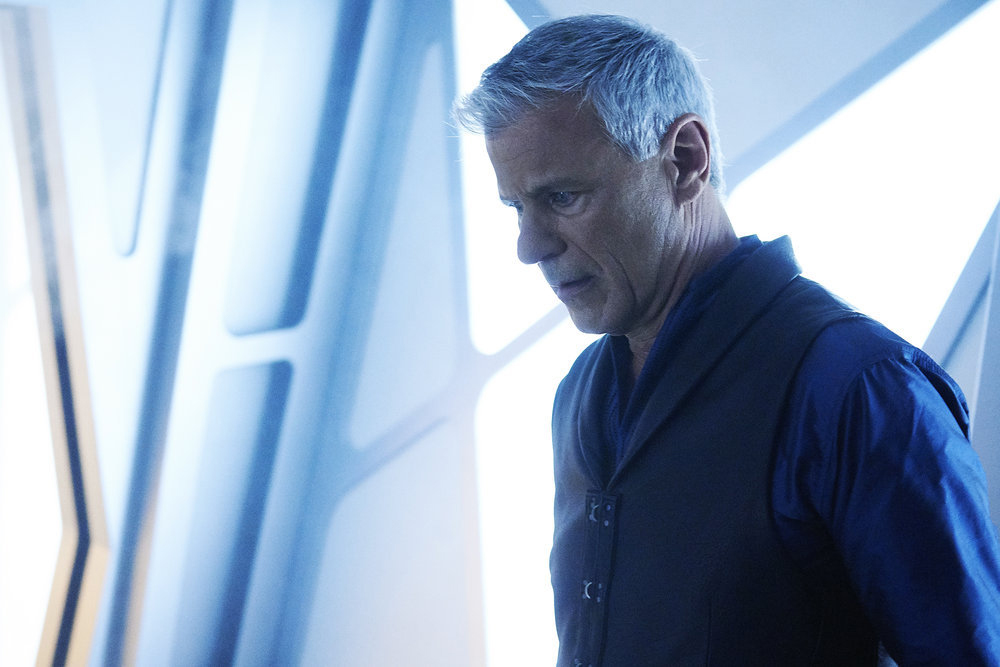 So we have Zeph on the table in her lair bleeding from a wound and Dutch, who has awakened, trying to patch her up. This is where we meet Turin as Dutch has to venture out to buy some drugs to help in what was surely one of the clumsiest impromptu operations we’ve seen. Turin won’t accept Dutch’s payment, however, so she rips him off.

Honestly, as painful as the whole thing was for Zeph as Dutch probed her abdomen for the schrapnel, even that provided some funny moments, the kind of moments that Killjoys routinely produces amidst the strain of strife and struggle. Dutch is digging around in the wound, Zeph is attempting to maintain some semblance of consciousness, then suddenly blurts out, “I smell egg. Did you make yourself a sandwich while I was unconscious?  Did you even scrub up afterwards?”

Priceless moment among many. I really enjoyed the developing dynamic between Dutch and Zeph towards the end of last year, even with the pain of losing Pippin. Two episodes in to this season and there’s a strengthening of that bond and Dutch is really offering Zeph some incredibly positive reinforcement. The sisterhood is likely the key to winning this seemingly unwinnable battle against The Lady.

Zeph eventually is able to create a protein inhibitor shake of a cure that will eventually bring Team Awesome Force back together. The plan is to lure Johnny and D’Avin, who have joined forces to find “Yala,” to the factory where a few bombs would disable it and slow the lady’s terra-forming plan down a bit.

First part of the plan works. The boys show up and Dutch delivers the curing dose (with Zeph’s shock treatment help) to them and we’re all friendly again, though D’Avin has some questions about Johnny and Dutch’s marriage, which is fun. Referring to Dutch as his “girlfriend” gets a quick whirl-around from Dutch who asks if she really is his girlfriend (wry smile and all).

Second part of the plan goes off nicely with the gang placing explosive charges successfully throughout the factory. Now here’s where it goes a bit haywire. While Zeph can’t get the doors open for the escape, Dutch runs across the hatchlings being stored in the factory. Fortunately, a flamethrower she took off an employee is just the right weapon for a hatchling roast, something Dutch seemed to enjoy very much. The Lady, however, not so much.

Unfortunately, this is where the plan goes awry as Dutch is late, the door won’t open and the bad guys catch the good guys. Adding to the misery is that Zeph, hobbled and bleeding (though bandaged up with duct tape because Dutch doesn’t know how to sew), heads upstairs to fix her equipment, only to be caught in the rainstorm. You know what that means – memory wipe. 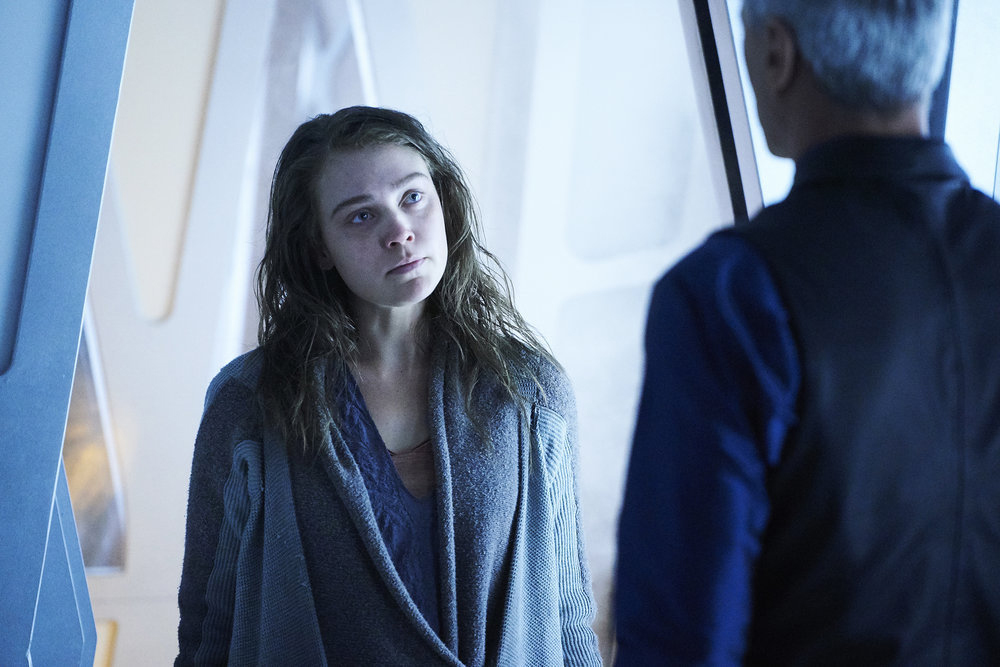 Yup, Zeph will have to be re-awakened, it would appear. Still, in the moment the rain falls, we again see just how smart and resourceful she is as she carves some symbols into her arm. Later, as she ambles about in a pretty good zombie-like shuffle, we see the symbols on her arm and her confusion. She walks by her lair’s entrance and we see the same symbols on the sign there. Figure it out, Zeph, er, Stinky Raincoat. Figure it out.

Wow, I continue to marvel at how far Zeph has come in terms of being part of the team, becoming stronger and more resilient, and being such an intuitive player in this whole thing. Here’s to you, Stinky Raincoat. May your raincoat keep you dry and the stink never leave you.

A few other interesting tidbits in this episode. We see that The Lady, or a conduit for The Lady, takes on a new body – in a most unpleasant way, something Khlyen is witness to. The Lady, played by Alana Bale, is really an interesting character. I think I’m going to enjoy the dynamics between The Lady and Khlyen moving forward.

Khlyen is a guy who you can tell is always counting the chips, measuring the opponent, planning and re-planning, for what may or may not transpire. I like his cerebral approach to problem solving and the patience to let the game play out before he makes a move. He and The Lady should be interesting counter-points to one another.

The Lady has a new body, Khlyen is in tow, Team Awesome Force has been captured, Zeph is once again a rain-soaked vegetable, Fancy Lee is still delightfully cool (And yes, sexy as well), and Turin is selling drugs and making threats on a suped-up moped of some kind. It’s good stuff. Oh, and Turin got to give Johnny a sucker punch in the gut, which was funny as hell, courtesy of an offer from D’Avin.

Again, another great line as D’Avin and Johnny meet Turin for the first time. Turin is pissed about being ripped off by Dutch and when D’Avin says he’s got an offer, Turin’s reply is a great one, “Hot damn. Does it involve me throat-punching one of you two.” Again, in the midst of a tense situation, a little comedic gem is tossed our way.

So here we are, our heroes are two episodes in and we’ve already had multiple “plans” that have delivered varying degrees of success and failure. But Dutch and Zeph have helped start things on the road to recovery, I hope. D’Avin and Johnny are awake, and I suspect Lucy is also dialed into all this and should have a part to play as we march along. There’s a desperation in the air right now and with our heroes in the clutches of The Lady, I’m sure the banter during torture will be fruitful as always.

What worries me is the Jaq equation. Khlyen figures out that The Lady wants Jaq and is told quite plainly that he can only save one – the grandson or the daughter. Khlyen tells her she knows what he chooses, but of course we don’t. Does he go with grandson? Is it Dutch? Does he figure if he picks the grandson, Dutch has the skills and mentality to turn ugly into beautiful? And what does that mean for Johnny and D’Avin?

You can see the pieces are starting to move into place even as time is running out. And how will our gang get Zeph, Pree, Fancy Lee, Turin and others out of the dreamlike state they now reside in. Protein inhibitors for everyone…on the house!!!