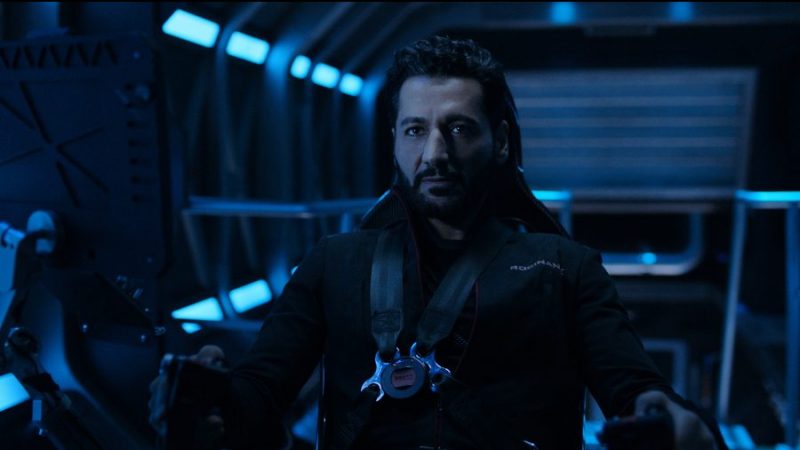 After viewing these three episodes back-to-back, I decided that they all played such an interesting role in moving The Expanse along in its fourth season that I’d meld them into one review that kind of encapsulates the whole, rather than break them into bits.

The Expanse hasn’t lost a dang thing, in my estimation, with its move to Amazon. And in many ways, I think the show and the characters have matured nicely in this new creative realm and I find myself enjoying that maturity from scene to scene. The Expanse season 4 is dramatic sci-fi done wonderfully well and I think that’s something that can’t be underestimated as this show takes its place, it’s rightful place, in the pantheon of valuable sci-fi offerings.

So, with that, I’m going to offer some thoughts and themes that run through these three episodes, which will all lead up to a season finale review a little later on. So, if you haven’t seen The Expanse yet, or are slowly working your way through, be forewarned that SPOILERS are on the horizon. Again, SPOILERS ahead, though not a lot. I’m going to keep it broad-based and a little less detailed than I usually do.

I haven’t talked much about the work that Steven Strait has done as Holden this season, which is a shortcoming on my end. However, episodes 407-09 really reinforced for me just how impactful Strait is as Holden throughout season 4. He’s that fulcrum that the show continually swings on, trying to offer order in a story that seems to thrive on disorder. As The Expanse has moved on in season 4, the stress and strain that Holden is under seems to grow with each episode. 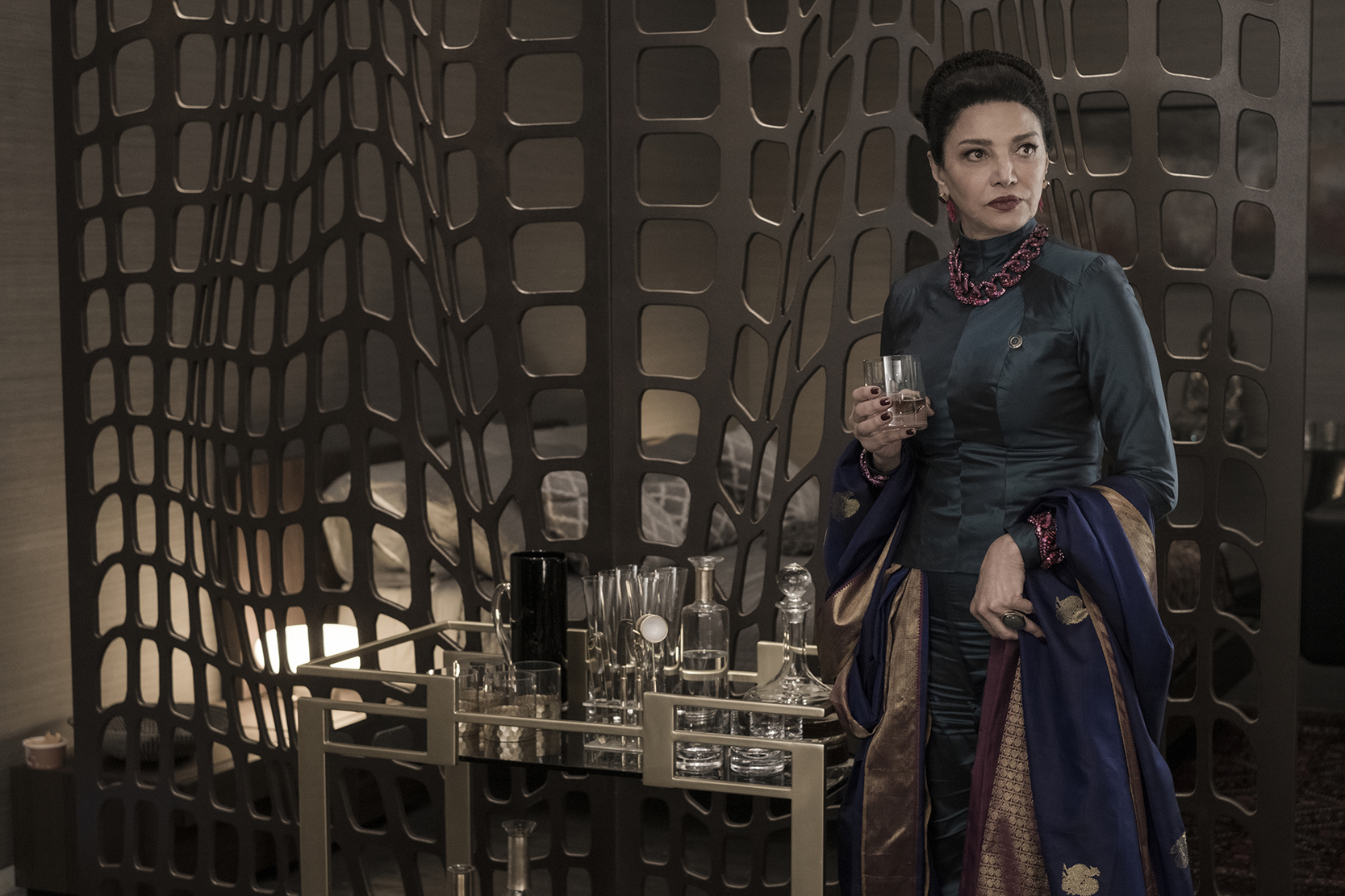 And he is perpetually in the middle of The Belter-Company standoff. Sure, it doesn’t help that Murtry is continually manipulating and creating very unpleasant contingency plans, but that’s a small part of it. Holden wants it to work out, wants to do right by everyone, and by these episodes you can see on his face that he knows in his heart that isn’t going to happen. Strait does a great job of conveying his frustration and then his commitment to a seemingly unavoidably bad outcome for all. But will it be?

Through these episodes he helps the Belters and the company teams survive the Tsunami by taking refuge in the protomolecule structure. Yet even there, with their lives hanging in the balance, we find people’s will to be contrary very much at play. It’s one of those “can’t see the forest for the trees” kind of moments and Holden is forced to sit there, in that confined space, and wonder why these people are so stupid. Strait is wonderful in conveying that frustration and deep-seated sadness at the old hates still having such purchase in people’s souls.

Then throw in the eventual blindness due to the eye infection, as well as the poisonous slugs, and you get a real sense of the dankness and desperation that permeates the air through these three episodes. It’s a powder keg and Holden is trying to hold it all together and he knows he can’t. Great work by Strait in season 4 and he needs to be applauded for it. Thanks goodness for his cancer medication, eh? Good doctor Okoye put that to good use, didn’t she?

See, there’s hope there. Don’t worry, though, if I’ve learned anything from The Expanse, it’s that there’s always an issue about to rear its ugly head right around the corner. The season finale should be a hoot of action and intensity. My hope is that Murtry and Amos throw down at last, but that would be too easy, too simple. And where does Wei fit into this thing. She’s clearly loyal to Murtry, but her relationship with Amos has aroused some interesting feelings – feelings that you can see have her rethinking where and why her loyalties lie. And we find that out later, to tragic consequences. 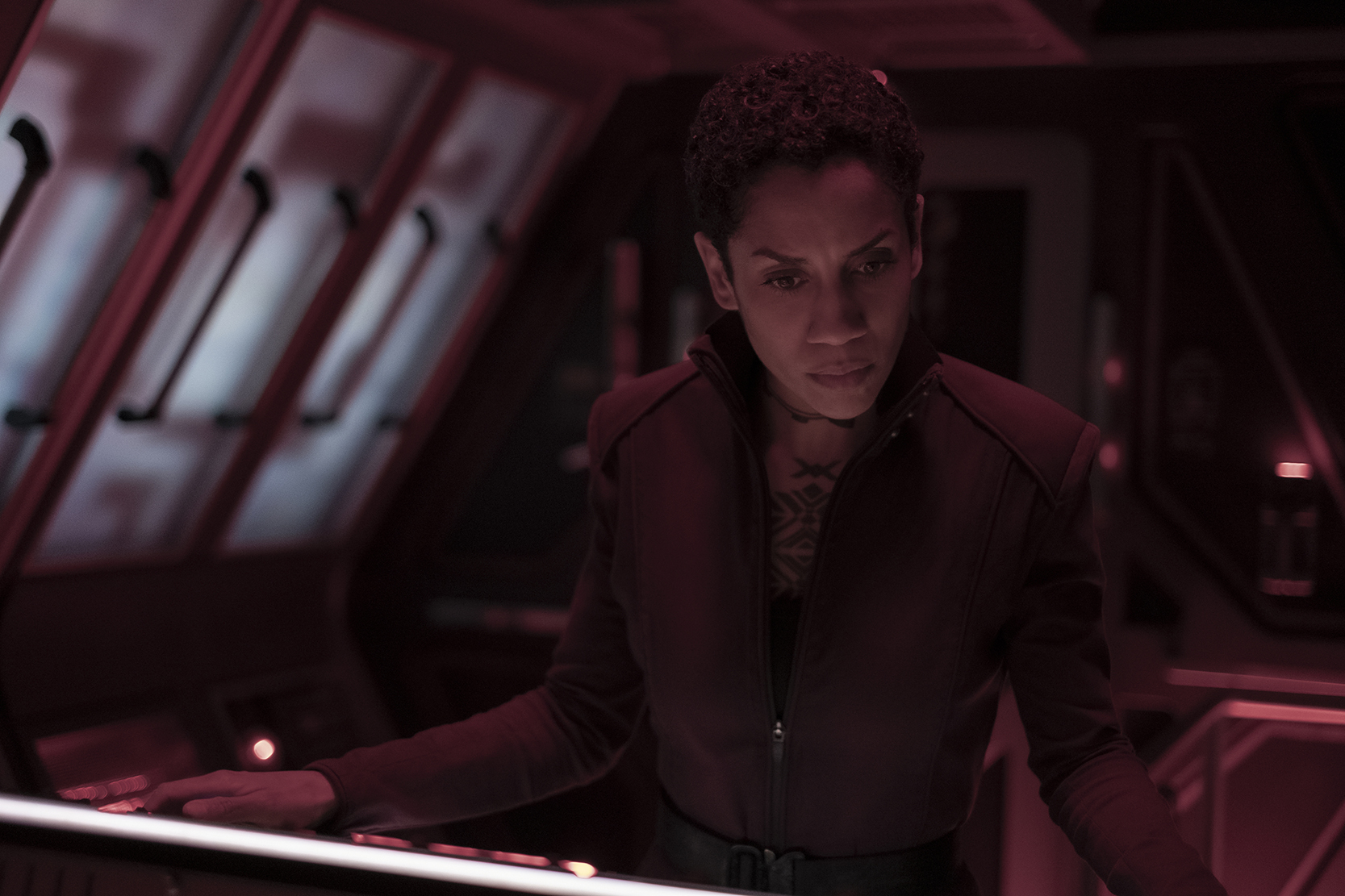 Well, thanks to a visit from Miller, Holden is once again on a walkabout within the ruins to find some sort of mysterious power source, and Murtry isn’t having any of it. He’s come to the conclusion that he has to kill Holden and he drags Wei along with him. This leads to one of my saddest moments of the show. Wei stays to confront Amos while Murtry is supposed to be after Holden, but he doesn’t. In the end, the death of Wei and the hands of Amos just crushes me, as well as seeing Amos get his fingers blown off. It’s a sad moment and one that is worse when Murtry puts another bullet in Amos, too.

So we’ve got Miller inhabiting some metal to give him some form and talking with Okoye, who has chased after Holden. They’re in the switch room (they hope) while Holden goes after Murtry. They meet on a bridge in the ruins. I always enjoy a little bad guy dialogue, something Holden and Murtry have. The contempt for each is both palpable and intriguing. All that has happened on this planet has led to this moment. And in one of the better scenes of this season, we get a little western quick draw – while Holden and Murtry are both hit, Holden gets the better of the exchange. I still want Amos to kick Murtry’s ass, though. We shall see.

I thought the Miller and Dr. Okoye finish was interesting. Miller’s essence has found an outlet in various pieces of metal and he’s trying to get into this, eye of the devil device. He’s the key and when his first attempt fails, Dr. Okoye lends a hand by dragging Miller’s “remains” to the lock and, did she really pick it up and toss it in? Did she go in with it? We see Holden arrive back at the location and yell “don’t,” then have a scared look on his face. Dr. Okoye has been an interesting addition. She’s part of the company team that was sent to study the planet, but so much of what she’s doing has been overshadowed by Murtry’s tactics and goals. 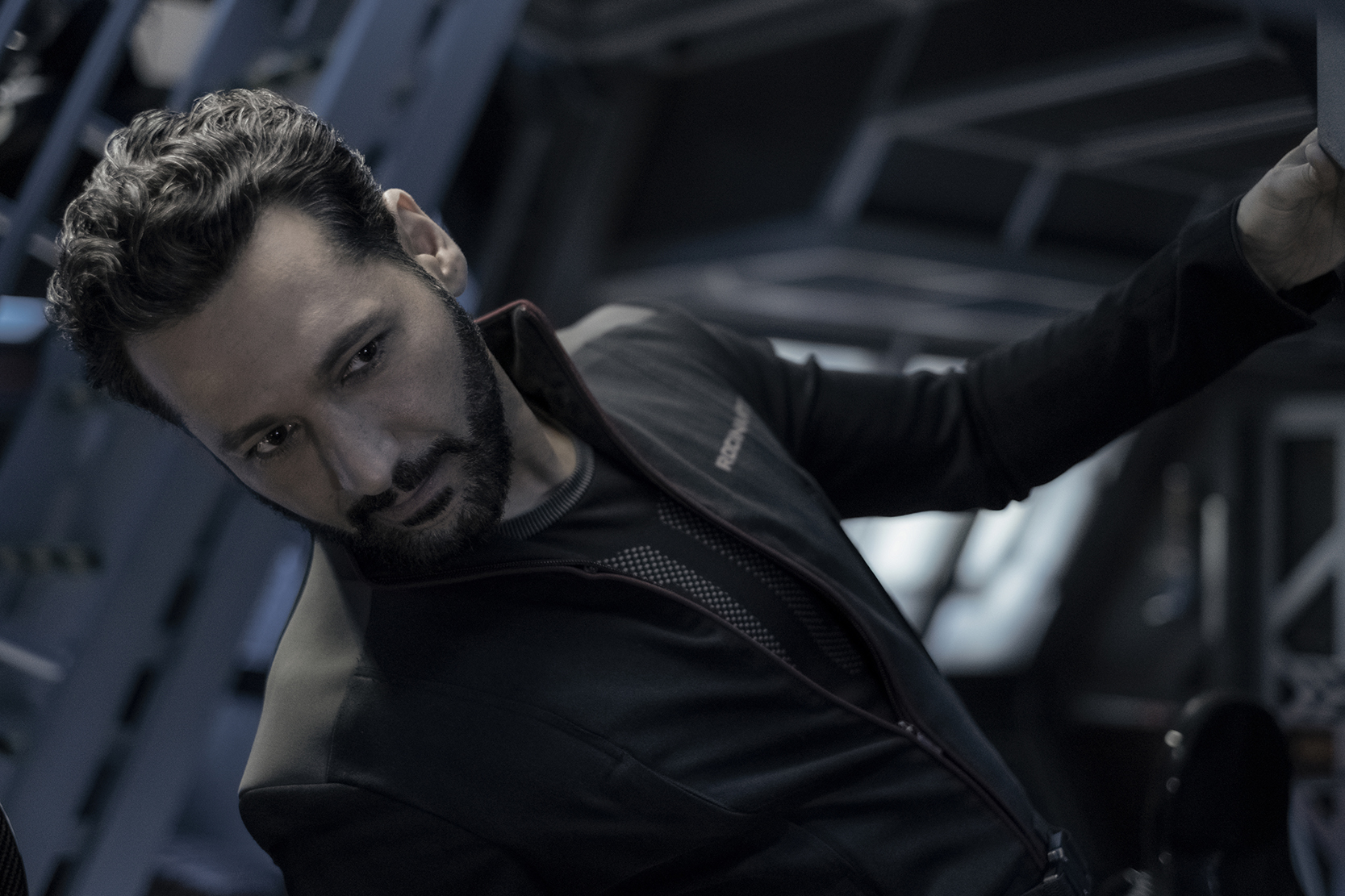 But as the season has gone on, she’s not only learned more, but become as intrigued by the protomolecule as Holden, Alex, Naomi and the rest are terrified of it. The scientist in her has been stimulated and any fear she feels is negated by her desire to learn more. And hell, she even found a cure for the eye infection, so she’s a gamer. In this arc, she gets deeper into the muck with Holden and the slugs arrive, as well as the blindness, yet still has the ability to fight through fear and despair toward a possible solution.

By the end of episode 9, has she made the ultimate sacrifice? Did she go into the “lock” with what’s left of Miller? Should be interesting to see how this all plays out with her.

So much of what’s going on in these episodes is this building of both story and tensions. Chrisjen Avasarala is displaying some unpleasant qualities as she fights to win the election over Nancy Gao. It’s interesting to see how important this election is to her, and how it impacts her in some unpleasant ways (and her husband?). Perhaps the comment Gao made about Chrisjen never having to have won anything previously struck a chord. And in this moment, with so much hanging in the balance, Chrisjen Avasarala finds out just how much she wants to win something.

And while Chrisjen battles both a political opponent and her own inner desires, we see Bobbie Draper becoming quite the little operator. She’s proven a valuable resource for the black market folks she has started working for. Her unique skill set has proven invaluable to the group, though there are moments when you can tell she is gathering information, observing the circumstance and the reactions of those around her. I find it comforting that she continues to stay sharp, but wonder where it will all end up. She senses danger out there. Is she right? 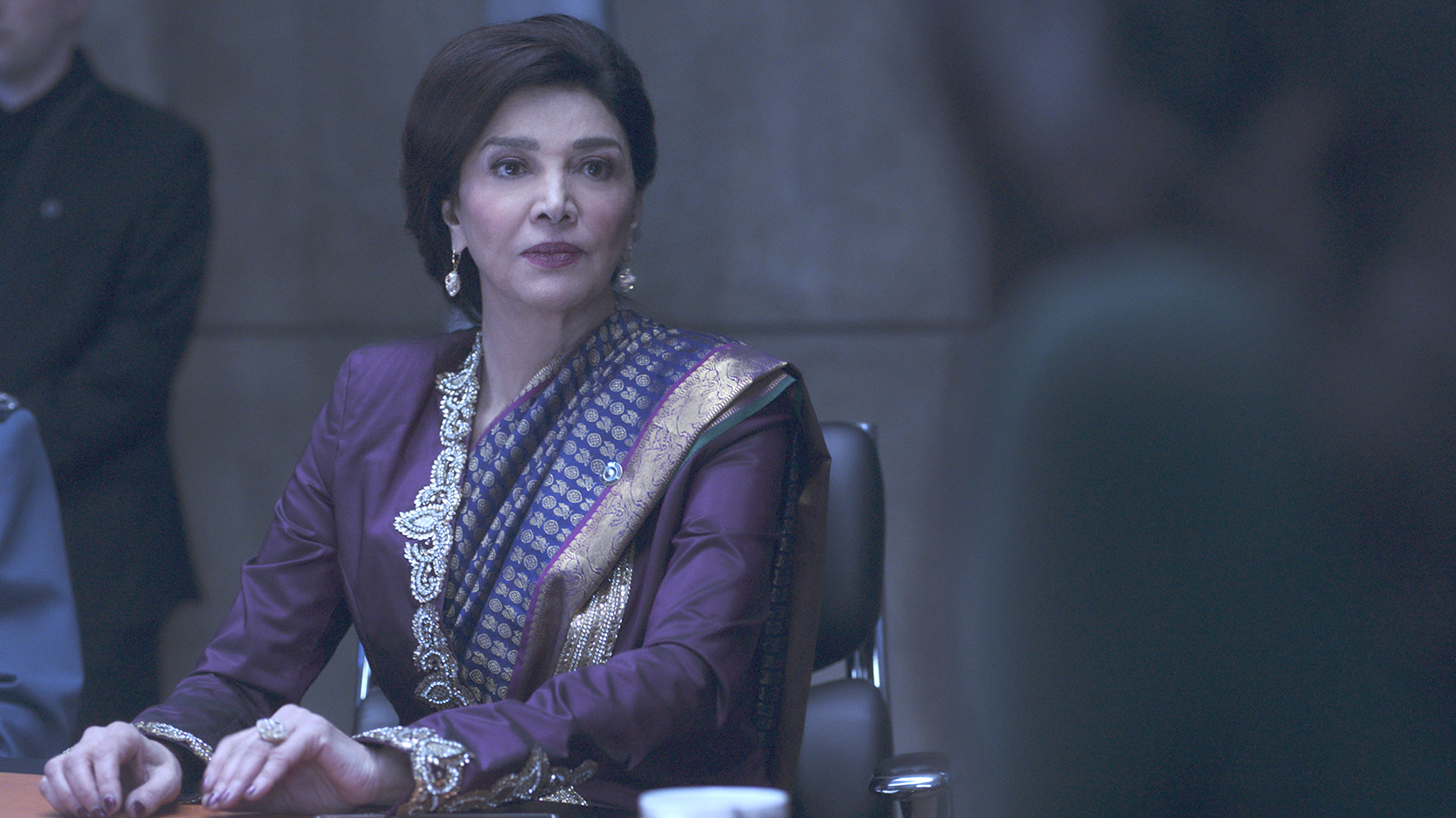 And while all this is going on amongst the planets, the ships above Ilus are struggling to stay in orbit. And while they are trying to help each other, the Edward Israel launches a little bit of a sneak attack with a rigged shuttle as the Rocinante attempts to aid the “Barb.” We got a great scene of Felcia being knocked off the ship and Naomi taking a wild space walk to save her. Once again, the spectre of Murtry’s machinations rears its ugly head. Honestly, can that guy scheme any more? It’s annoying, but at least now he’s got a bullet in him.

So all this leads us through the penultimate episode. The protomolecule issue is still to be decided, Murtry needs to be taken to task, and the Rocinante is damaged from the sneak attack. I did enjoy the Lucia-Naomi-Alex moments in the final episode. There was guts, there was bravery, there was a sense of sacrifice as they talked through saving the Rocinante, the “Barb” and what the ramification might be. They were good together and I enjoyed it.

And two of my favorite characters, Drummer and Ashford, decide they have had enough of politics. Drummer announces to the recently arrived Fred Johnson that she is resigning as the head of Medina Station. And Ashford isn’t into running it as well, deciding that his path lies in pursuit of Marco Inaros, who he sees a direct threat to the hopes The Belt has for true, peaceful independence. And with that, we head into the season finale with these two on very different paths. Again, watching these two characters interact is such a joy. So good together, such chemistry and wonderful flashes of good work. Truly remarkable.

Looks like an explosive and interesting final episode is in store. Can’t wait to see who is saved, who is lost, and who finds their lives completely changed. I know Amos will be, losing Wei like that. Uggh, I’m still feeling that pain. I will say that Miller’s increased instability in the season’s final episodes has been interesting. There appears to be a lot of interesting interplay between Miller and the Protomolecule – and we’ve found that the protomolecule was a jailer for Miller and Holden’s “giving a shit” was a key to bringing Miller back as a helper for Holden. That’s been so very interesting.