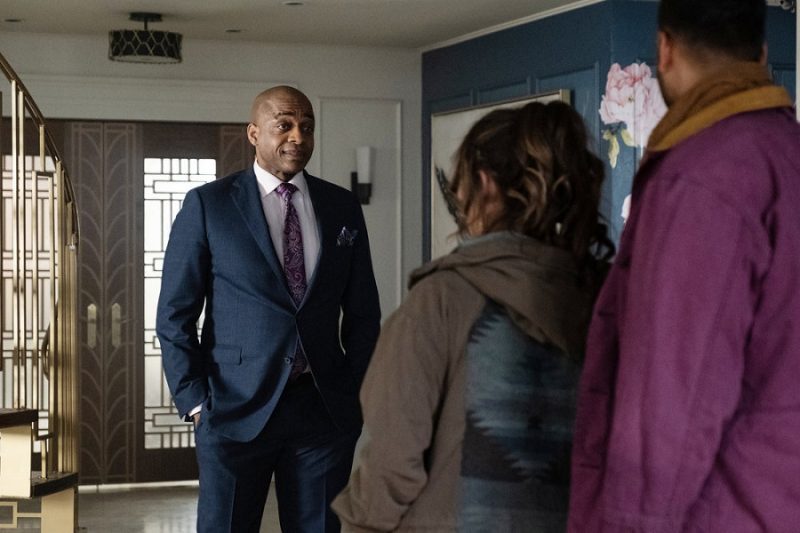 Home » TV » TV Reviews » The Magicians: “Do Something Crazy” Review

The Magicians: “Do Something Crazy” Review

By: Michelle Harvey January 15, 2020
TV Reviews syfy, The Magicians, The Magicians Season 5
The Magicians returns tonight with its season 5 premiere, “Do Something Crazy.” This episode is exactly what fans of the series needed coming back from the gut wrenching season 4 finale. Quentin is gone, that is an emotional reality that we all have to face. The beauty of “Do Something Crazy” is that Q’s presence isn’t forgotten, he is there in spirit, and continues to drive the story and other characters. We need some time to grieve, as do the other characters. I believe that season 5 will be a cathartic experience as we grieve alongside Alice, Eliot, Margot, Julia, and the rest of the group. Of course, there’s more than just grief, life still moves forward – if you’re ready to face it or not. And a big part of grieving is having to figure out how to keep going on. Of course, in The Magicians everyday life means dealing with deadly magical surges, an impending apocalypse, and trying to time travel Fillory back to the present. Quentin is still very much a part of this story, because his absence, and the pain that his absence is causing – will drive the rest of the characters to great things with him in their hearts. 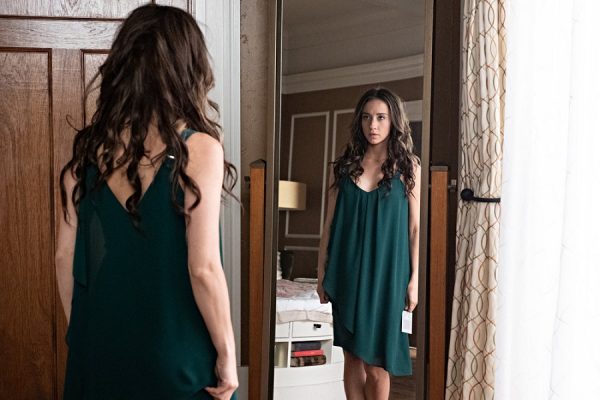 THE MAGICIANS — “Do Something Crazy” Episode 501 — Pictured: Stella Maeve as Julia Wicker — (Photo by: Eric Milner/SYFY)

We follow two separate timelines through “Do Something Crazy”,  Eliot and Margot in future Fillory, and everyone else back on Earth. When Quentin brought magic back, something happened to Fillory, though no time at all had passed on Earth, Fillory ended up 300 years in the future. Eliot and Margot need to figure out a way to get Fillory back in sync with Earth, otherwise they may just be stuck in the future. Of course the 300 year time jump has other consequences. Fillory has a new Dark King, and has gone through something called The Great Unshackling. Being 300 years in the future can’t have meant good things for Josh and Fen, but Margot isn’t ready to hear how they met their untimely ends. Margot is taking on a lot here, not that she can’t handle it all, but she shouldn’t have to. She’s upset about Quentin, she’s upset that Eliot doesn’t want to process anything that happened while the Monster was controlling his body, and she has to learn of her boyfriends death via a childish play put on by the FIllorians to celebrate it. It’s enough to drive even the strongest into a sobbing ball on the ground. Margot gives herself some space to really feel it all, then picks herself up and decides that she will figure out a way to fix it. She can’t change what happened to Quentin, but if she can get Fillory back to the proper timeline, maybe she can save Josh. So all of her grief (for them both) is thrown into finding a solution, giving her an opportunity to feel like she’s in charge of the situation. Eliot, decides to grieve by consuming various libations; not surprising but also maybe not the healthiest. Though Margot asks him about it, Eliot doesn’t want to talk about Q, and would prefer to focus on their current situation. I think that he’s just not really ready to face Quentins’ death, and will get there eventually. These two fall right back into their comedy quips, it’s almost as if Eliot wasn’t taken over by a monster the entire last season. Which really just highlights the on-screen chemistry between Hale Appleman and Summer Bishil. With references to Avengers: Endgame and talk of cosplay – their dialogue is not only beautifully delivered, but perfectly written, almost breaking the fourth wall and pulling us into their world. 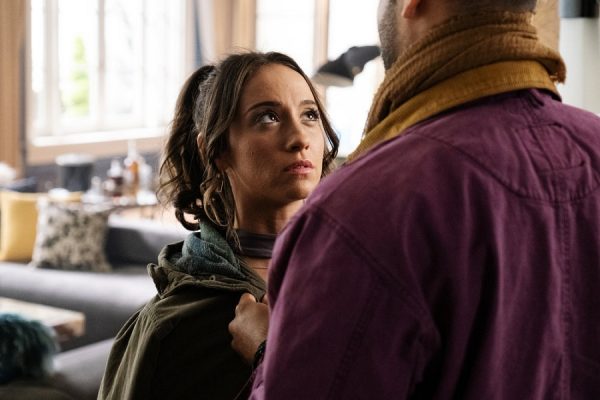 THE MAGICIANS — “Do Something Crazy” Episode 501 — Pictured: Stella Maeve as Julia Wicker — (Photo by: Eric Milner/SYFY)

Back on Earth, things are hectic. When magic came back, it came back with a vengeance. There’s too much of it now, which is leading to dangerous magical surges. The overwhelming presence of magic also means that there are more individuals tapping into their magical potential. Brakebills is overrun with students, Dean Fogg doesn’t have enough staff to handle the influx of new students, and the magical surges are unpredictable. This group is also struggling with the loss of Quentin, and showing grief in different stages. Julia is determined to find something to do that will make magic worth what it cost. Pretty difficult to do when the cost of getting back was literally priceless. She misses her best friend, and wants her magic to mean something for his memory. Towards the end of the episode she is visited by Sir Hargrave McGupney Cummings Archibald Brian Effingham III from Fillory who needs to bestow a Quest. Unfortunately he is looking for Quentin, or another male, as she couldn’t possibly handle the responsibilities of a Quest. That’s all Julia needs to hear, she now has something purposeful to use her magic on, I mean saving the world from an apocalypse has to count as meaningful right? And she has the drive to compete it because Sir Effingham said she couldn’t.
Julia and Alice are understandably taking Quentins’ death the hardest, and hopefully will find solace in each other as the season moves forward. They aren’t quite to that point yet though, and are still in the questionable decision phase. Alice is dealing with the death, by not dealing with anything at all. Locked in her room, ignoring contact from the outside world, unable to take care of her own basic needs. She cannot figure out how to move on without him, so instead devices a plan to bring him back, sorta. We don’t always make the best decisions in grief, but Alice stealing Quentin’s book from The Library and all of the Living Clay from Brakebills to try and bring something of him back to this realm – kinda tops the bad idea chart. Her mother tells her that if she needs to “do something crazy, to do something crazy” and it seems that Alice really took that to heart. But that’s the thing about grief, nobody can tell you how to grieve, nobody can grieve for you, and nobody can expect your grief to match their own. Though I think it’s a terrible idea, this is a bad idea that Alice needs to attempt before she can take those next steps forward. 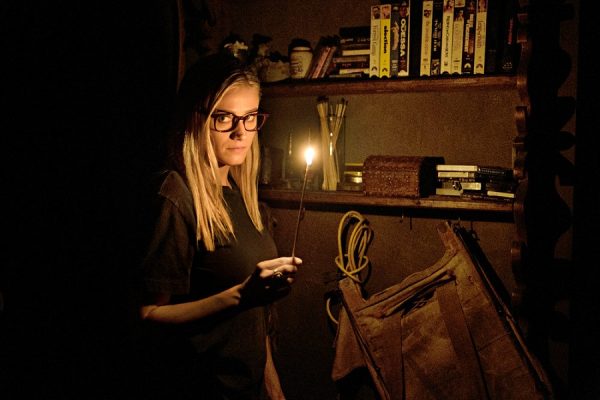 Against his own will Penny becomes the Professor for Traveling students at Brakebills. Being the only living Traveler in this timeline makes him really the most qualified for the position, but it’s not something that he’s passionate about. Due to the increase of available magic, not only are more people tapping into their magical potential, but the rare talents are popping up in more people too. He’s actually got a class of five students, and even if he doesn’t want to teach them – he knows that if he doesn’t at least one of them will die thanks to their talents. Kady is still unofficially leading the Hedge Witches, dealing with the fallout of The Library and trying to keep her people safe. These two don’t seem to be facing the same grief over Quentin, not to say that they aren’t upset. But Penny is so focused on helping Julia deal with it and Katy is busy running an organization that they don’t have the time to show it. 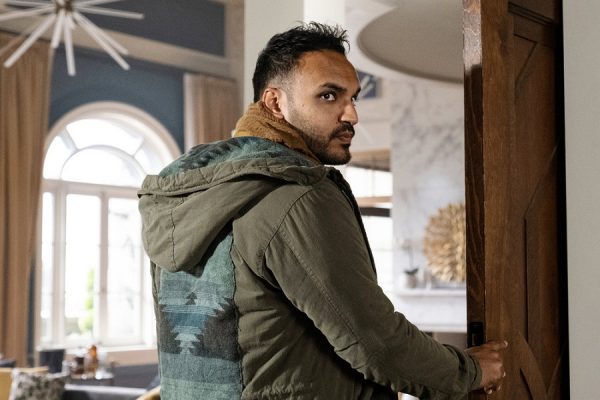 THE MAGICIANS — “Do Something Crazy” Episode 501 — Pictured: Arjun Gupta as Penny Adiyodi — (Photo by: Eric Milner/SYFY)

Grief. I keep coming back to that word in this review, but that is because this season leans into the grief, into the pain that follows loss, and the different ways you move past it. Grief can feel like an impending apocalypse, which is exactly what they are dealing with. Quentin is still very much alive in this story. He will be what brings this group really together, what drives them to make decisions, and ultimately live on through the rest of their stories. Quentin brought back magic, he changed the lives of the people around him, and even after death will be a main factor when it comes to saving the world again.
What did you think of the Season 5 premiere?

Comment below or find me on social media! Don’t forget to use #TheMagicians and join in on the conversation.