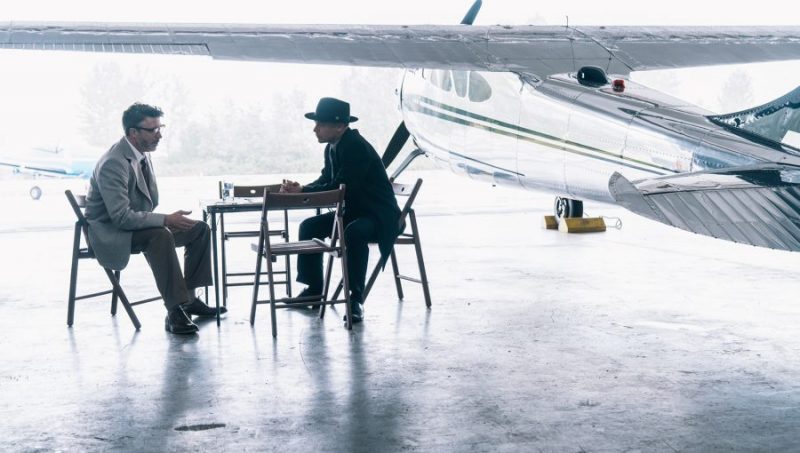 You know, there for a minute, I thought we were going to get through an episode of Project Blue Book without the irritation of the pending inter-agency civil war that had been brewing since season 2 began. Alien ship sightings, parts of the ship in the water, a trip to Washington State, some baddies are routed, and home with the kids as comfy as you please.

But no, that’s not the way Project Blue Book is functioning this year and the final moments of episode 205, “The Men in Black,” were a stark reminder that the alien investigation world is a topsy-turvy one – and the CIA isn’t playing around.

But that was at the end of episode 205, an episode that took us to the lush and verdant surroundings of the Pacific Northwest. So, before you trod another foot down the path, be forewarned that SPOILERS are ahead. That’s right, SPOILERS. So just be aware that from here on in, we’re talking about this episode, so don’t get SPOILED if you’re not ready. 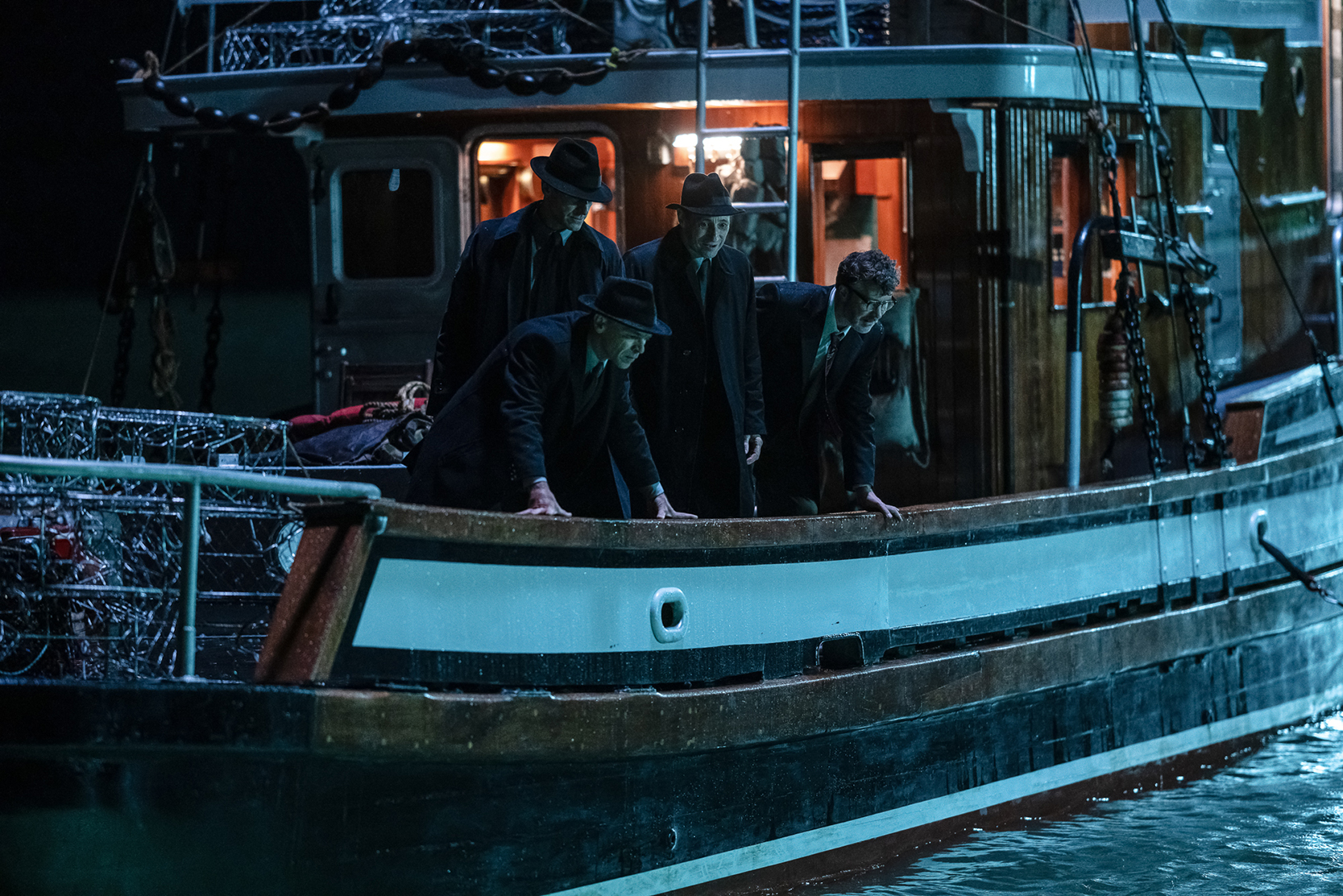 Got some interesting interplay in this episode, most notably between Dr. Hynek and his kidnapper, a man named William. Turns out William was part of the CIA’s “program” for pre-cognitive discovery. Remember Rebecca and her drawings from last episode? Well, she shows up again to help, but others like her, William included, escaped the program and formed this little secret society dedicated to first contact with aliens. And that’s why Hynek was snagged and dragged out to Maury Island, Washington – to help the group prove the existence of aliens.

Turns out, William feels that Hynek is the perfect conduit to transform the conversation from disbelief and lies to full-on truth about UFOs. If the respected Dr. Hynek says he met aliens, that word will carry far more weight than if William and his group were to produce the goods. It’s an interesting theory by William, but I’m not convinced that Hynek’s voice would carry over the attempts to cover-up by the Air Force, etc. I mean, if they can silence and discredit whole communities, I’m not sure Dr. Hynek’s voice will make a difference.

But, William thought so and with that thought process, felt that pistol-whipping Hynek into unconciousness, then flying him off to Washington to pick up some potential flying saucer pieces of metal in Puget Sound was a good idea. And that’s how this episode unfolds.

It’s obvious William has resources and a keen intellect. He’s also convinced that first contact is imminent and that Hynek’s help will be invaluable to that contact. So, they contact a man named Earnest Reed, whose fishing boat was bombarded by metal shards from a flying saucer that was apparently in distress some years before. Naturally, Reed recanted his story later as the government swooped in and suppressed the evidence and testimony. William and his associates want to get more of the material that they are convinced is lying on the bottom of the sound. 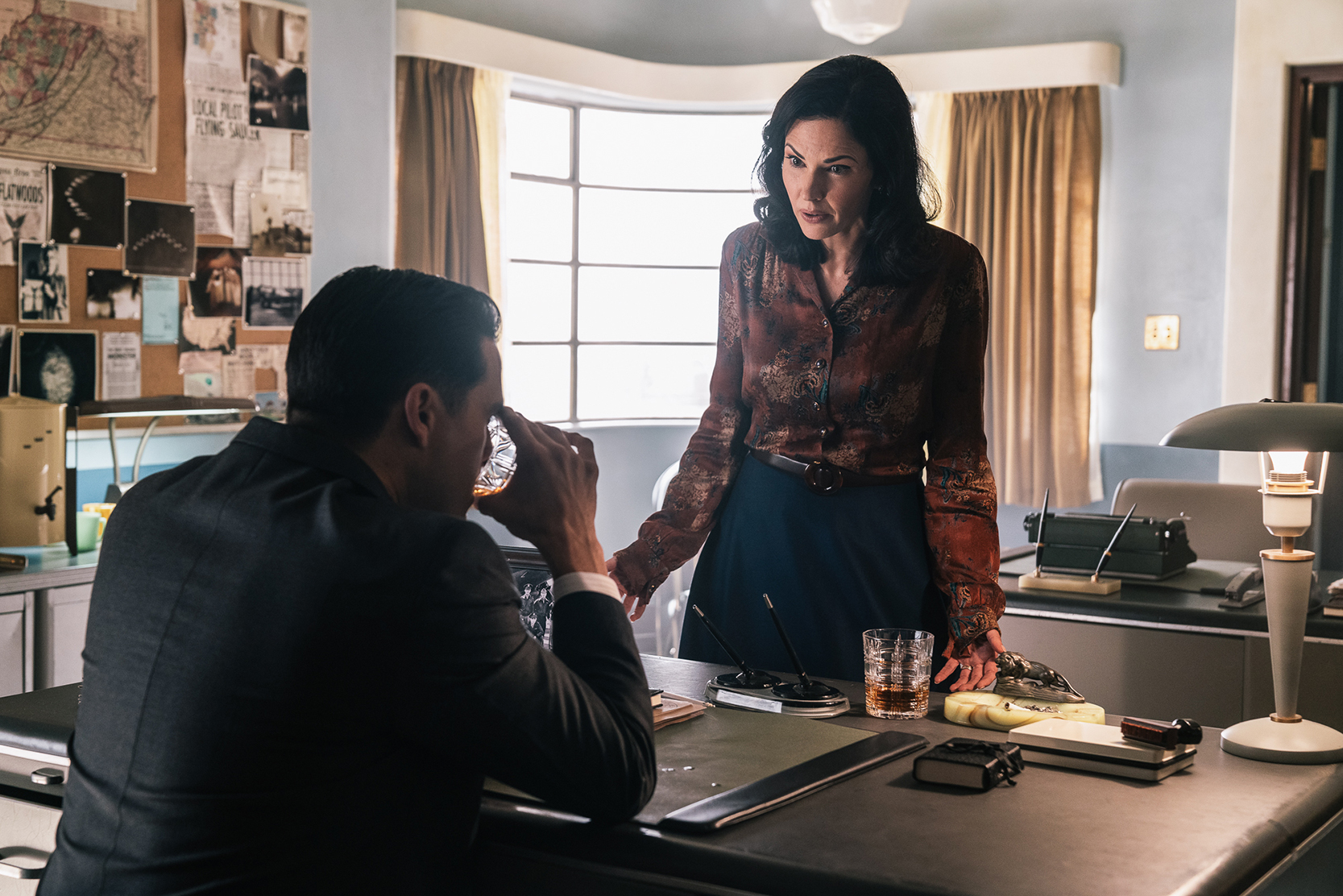 And that’s the holy grail – find more ‘alien’ evidence that will somehow help with first contact. But Hynek’s sudden disappearance doesn’t go unnoticed. Once again we get several instances where the intelligence and toughness of Mimi Hynek comes into valuable play here. First, an early phone call from Hynek to his wife ends with a clever little clue that Mimi susses out in fine fashion and sends her racing off to find Captain Quinn.

Later, with a little covert help from a woman in the Air Force office, she is able to put together a viable case for where her husband might be. Again, Mimi is smart, resourceful and very capable. She’s a woman who is really coming into her own and proving incredibly valuable to the work as a whole. Here, she is a key cog in finding her husband.

And that information comes in handy for Quinn and the return of Daniel Banks. Got to say it, I thought these two proved to be a good team. They pick up the trail and we get a little bit of sharing between the two as they head to Washington and, perhaps, a little better appreciation for each other and the work they do.

Heck, Banks even does a little probing of whether Quinn is happy in his current role. Mmm, we’ll have to keep an eye on that. Michael Malarkey (Quinn) and Jerod Haynes (Banks) have a nice little vibe between them as they have kind of moved this relationship along in the last few episodes. And again, they are a fairly potent force as demonstrated in the takedown of William at the airport. 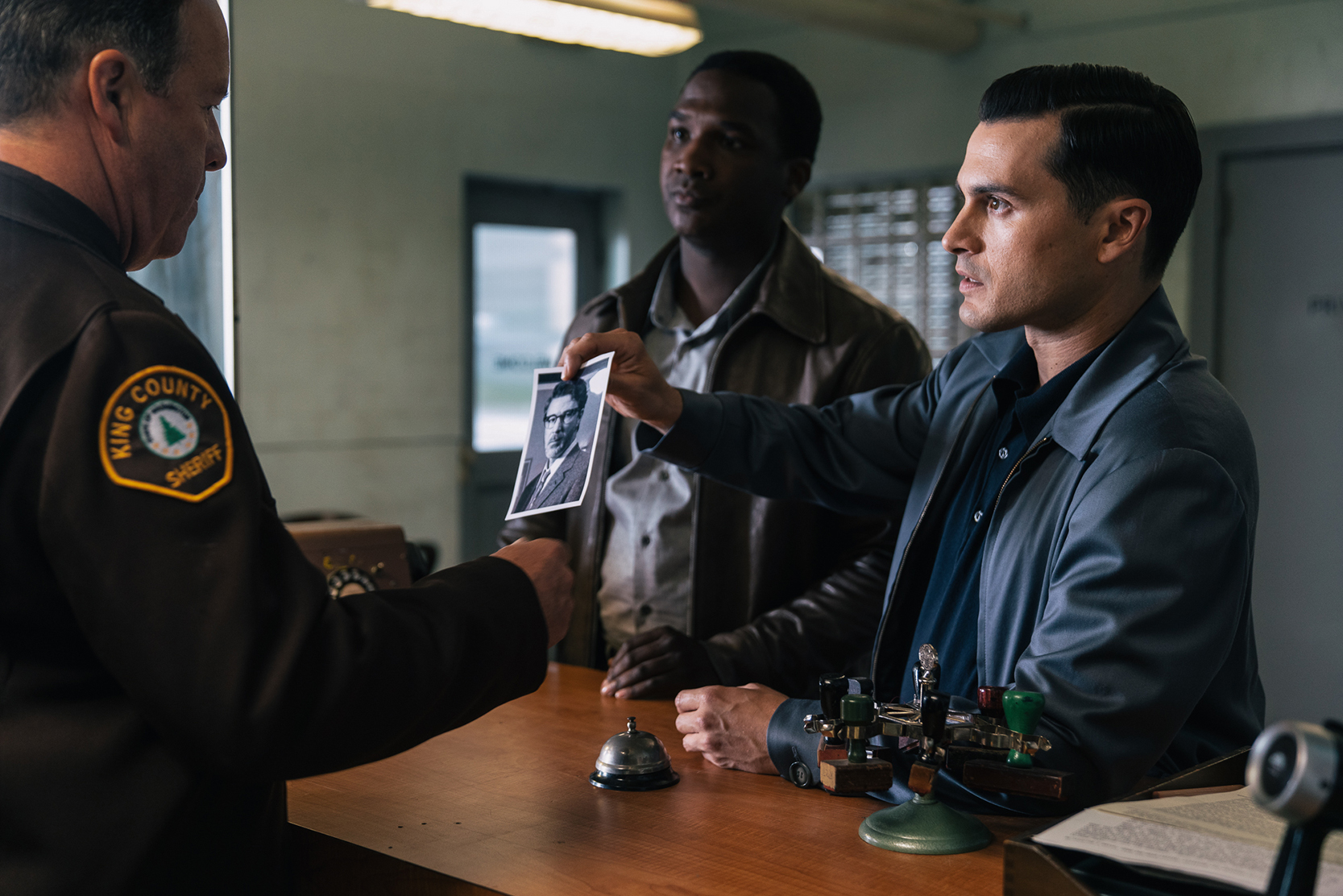 It’s also interesting to see that racism is alive and well in the King County Sheriff’s Office as Banks asks for police help in finding Hynek. The local sheriff doesn’t seem too interested in helping a person if Banks’ color, something Quinn finds a bit irritating and promptly jumps into a get things rolling. Still, it’s a reminder of the blatant racist attitudes that existed across this country in 1953 and the utter frustration that engendered for those of color in this country. I sense Quinn’s early reticence about Banks is slowly starting to smooth over, particularly as they track Hynek from Reed’s boat to the hidden landing strip near Gig Harbor.

Ahh, the boat. Yes, about that little boat trip Hynek, Willliam and his associates took. Hynek did his good deed by creating a distraction that allowed Earnest to escape, so they took his boat. Hynek was likely correct — once Earnest had served his purpose, William and his confederates would likely have killed him. So, good conduct points for Hynek in securing Reed’s escape. And it would be Reed who would eventually ID a photo from Quinn that sent he and Banks on the hot trail.

But the boat and the sound? What was there? Well, it turned out a green glow was emanating from the sea floor. Two divers went into to get some wreckage, but only one emerged. We got a little “Jaws” action as the ship was pulled over to a nice list before the cable snapped. Moments later, one of William’s associates bundles onto the deck with what appears to be some type of metal that gleams and shines. 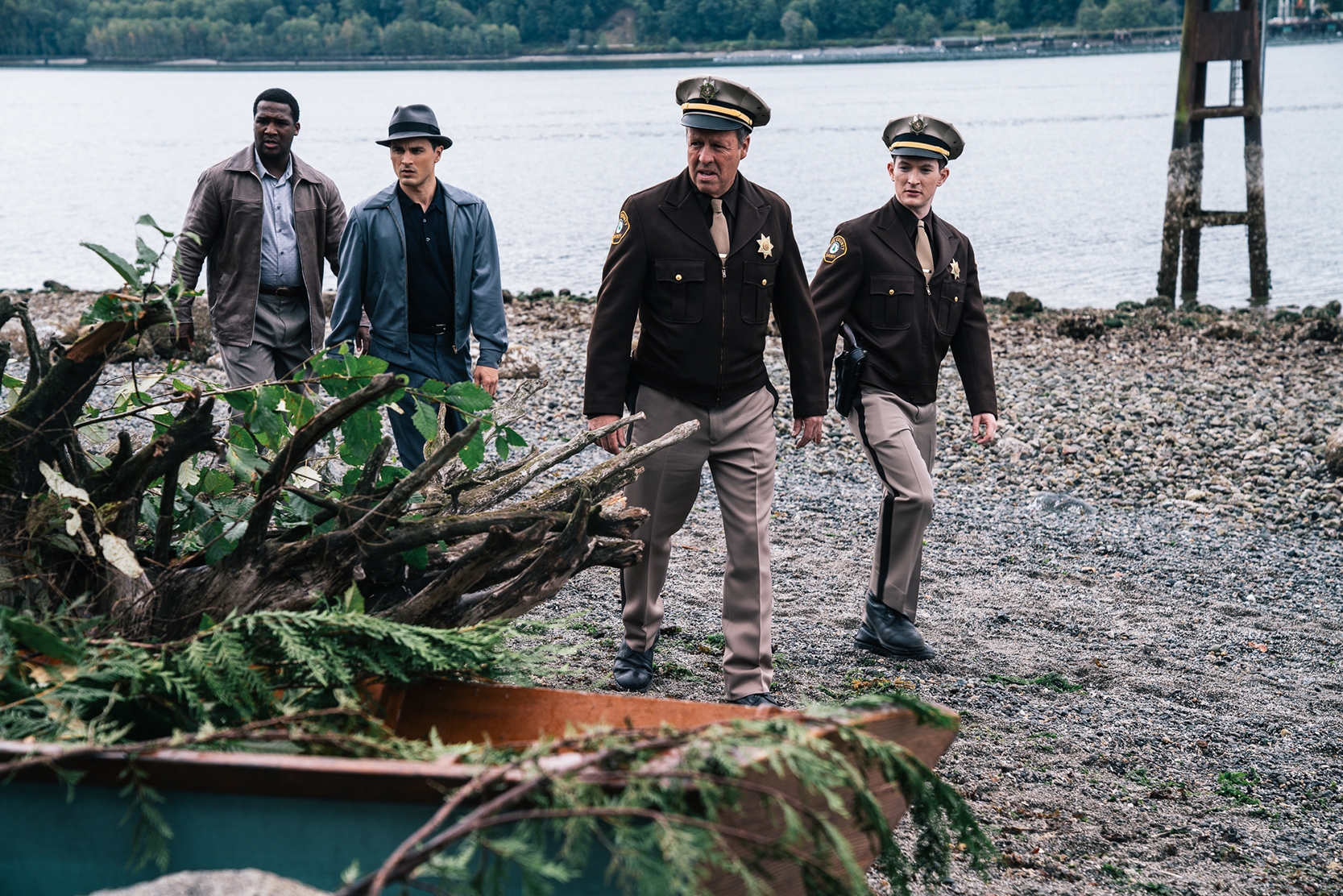 The other diver isn’t coming up. So what was that? Was it a “thing” down there or some power of a kind that reacted to their presence? I thought that an odd occurrence and wondered why no other sailors in that area had run across the green glow in the water?

However, with their pieces of metal secured and a plane awaiting at a clandestine air strip, William plans to take Hynek to Antactica. It is here, apparently, that the big reveal may well take place. One of the things that’s a little unnerving about these “men in black” is they are very willing to kill. We learn they downed an Air Force plane carrying some of the metal fragments right after the original event in 1947. You could see the effect this revelation had on Hynek. Of course he was also doing a little stalling as he hoped that the bread crumbs he’d left (notebook in the skiff – nice touch, doctor) would lead to some rescuers arriving. And it did.

On that lonely air strip in Washington, Hynek is found by Banks and Quinn, who are forced to watch William and a pal escape in a plane – a plane that Quinn puts a clip full of bullet holes into, some of which found the fuel line. That plane is coming down, but where? That’s the nagging question, I imagine Banks, Quinn and Hynek are all asking themselves. And when it comes down, will there be survivors and what will they do? 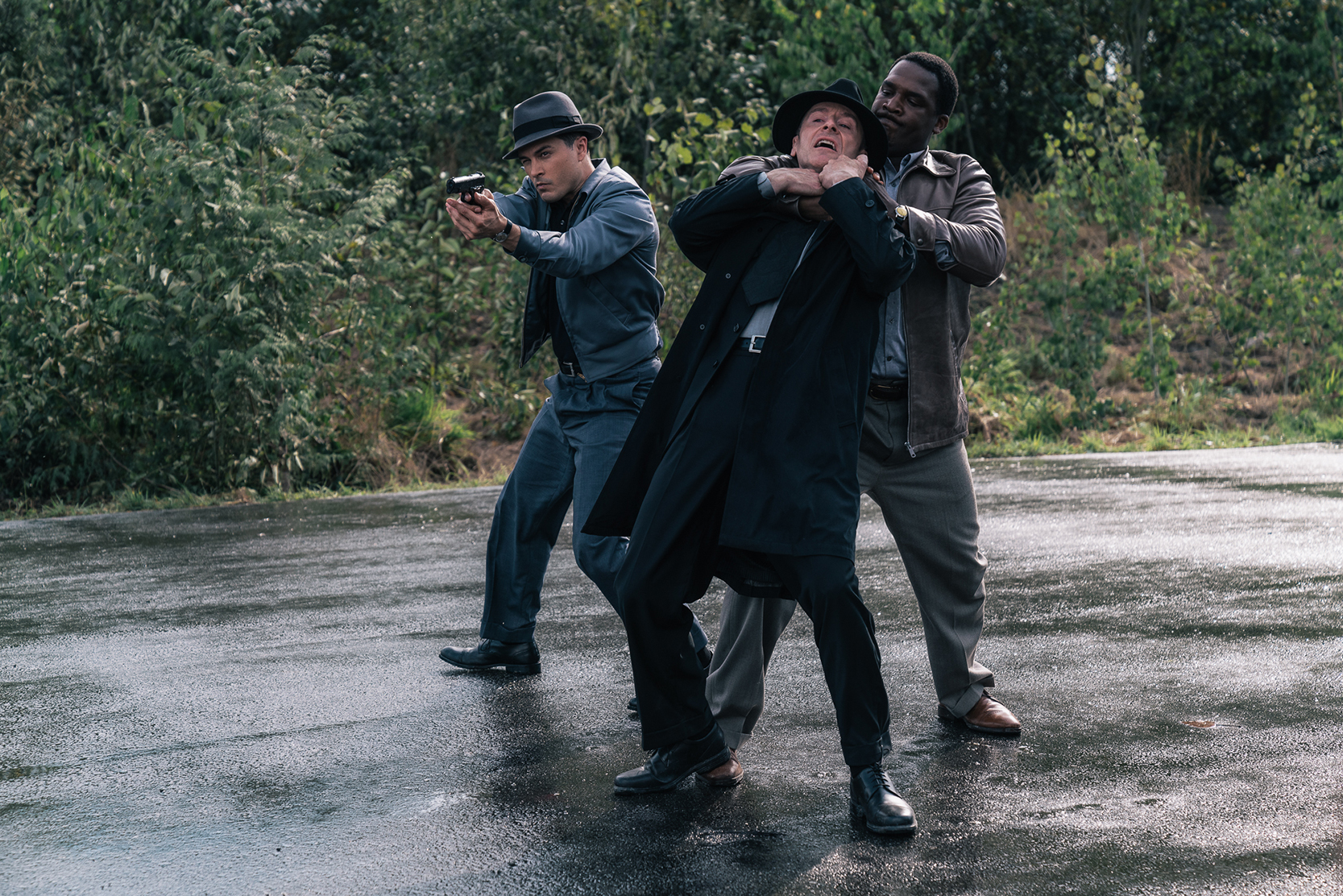 Well, we see that the plane crashes near Portland, but there are no bodies and the cargo is gone. Were I Hynek, I would be worried a great deal. The whole “William got what he wanted so he won’t bother us now” thought process doesn’t seem to fly in the face of William’s personality. I think, given William’s obvious interest in Hynek as the group’s mouthpiece, not to mention his admitted “grooming” of Hynek for the role, our man in black may harbor some resentment toward the good doctor. What do you think? Have we seen the last of William? And if not, does he come for help or retribution?

In the end, we get a happy homecoming in the Project Blue Book office back at the base. Mimi is sleeping on a desk when Quinn and her husband come in. There are thanks all around and relief, though news that William wasn’t on the crashed plane is clearly bothersome.

Still, the feeling is that everyone is safe and sound with good things to look forward to – and that’s when it happens. Generals Harding and Valentine, preceded by guards toting file boxes, roll into the room and inform our boys that the CIA is about to put the U.S. Air Force on trial. Project Blue Book is at risk through this Robertson Panel’s investigation. The boxes are filled with “homework” for our two alien explainers. 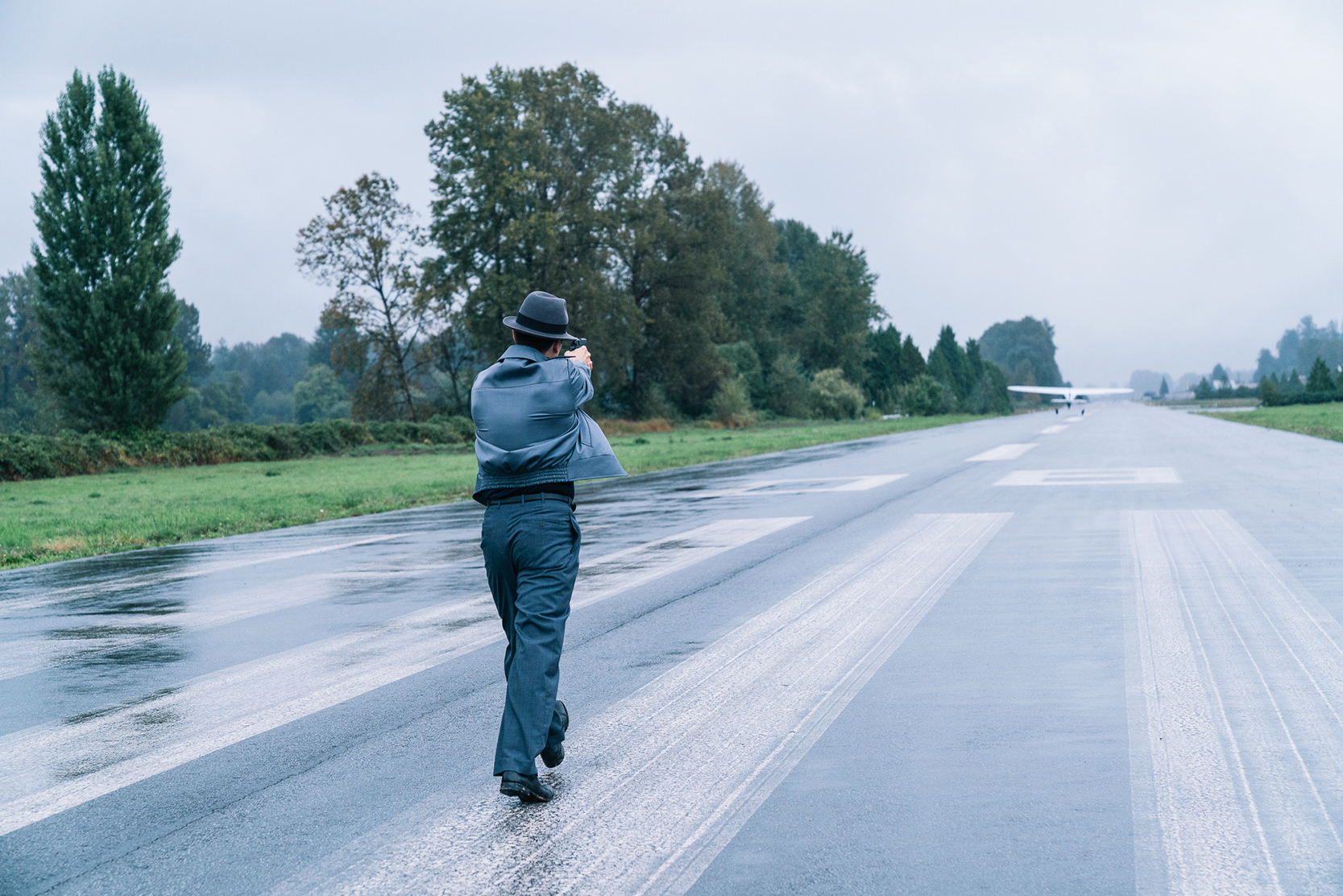 What’s most disturbing, I think, is that the purpose of this investigation isn’t clear. What does the CIA want? It would appear that the CIA’s machinations pose a direct threat to Project Blue Book’s viability. This should be an interesting development and I wonder how Daniel Banks might (or does) figure into this? My sense is he’s a good guy, but is he a better CIA operative, more subtle, than we see? That’s an interesting question to ponder.

This was a fun episode that brought into sharper relief who William is and what his organization is about. They obviously have money, how? Are they a tool of the CIA, perhaps, or is there some Russian interplay going on. They seem to function as a government shadow organization might, so it’s interesting to find out if they serve another interest besides their own. I’m very intrigued by this question.

In season 1 we’d kind of waltzed around it a bit as William provided Hynek with tidbits of information and teased what the future might hold. In this episode, we get a very real sense of William’s past and what he believes the present will entail. He’s a dangerous man with a dangerous organization.

For now, the big question is how this CIA-Air Force battle is going to swing. What is the CIA up to and why? Do they want to control Area 51 and all the alien investigation aspects? They are an intelligence organization and that would seem to fit with their role, doesn’t it? Should be some interesting action as this plays out behind the other investigations that Project Blue Book will no doubt be engaged in moving forward.