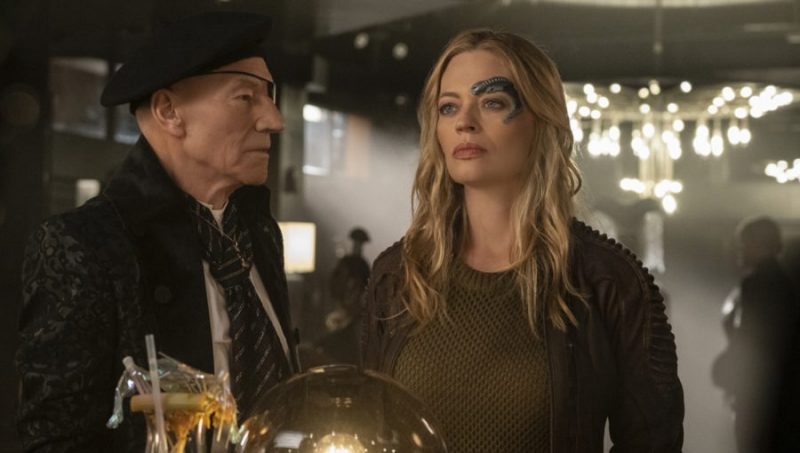 If there’s one thing that’s clear to me after five episodes of Star Trek: Picard, it’s that all of those aboard the good (space) ship La Sirena have a healthy amount of pain and regret in their past that seem to be relevant to the hunt for Dr. Bruce Maddox, and by extension the life-saving adventure pointed at Soji.

In Episode 105, “Stardust City Rag,” we get color, cool, and Captain Rios channeling his inner ’70s crime drama pimp. Personally, I loved it. A little different vibe than what we’ve seen so far in Star Trek: Picard, but despite the fun, there’s darkness here. What wasn’t different was the pain that the past had left on the psyche of Seven of Nine, Dr. Agnes Jurati and even Raffi. Yes, my friends, while the continuing adventures of Picard have kicked off splendidly, this show has a the hint of melancholy and regret sprinkled throughout. It IS a different vibe in terms of Star Trek adventures, but I find it somehow comforting and very real in the context of sci-fi space adventures.

Before we start, let me offer this warning – SPOILERS are ahead. So, if you hasn’t seen the episode, go watch it immediately. But go on from here and you are subject to SPOILERS. So beware. 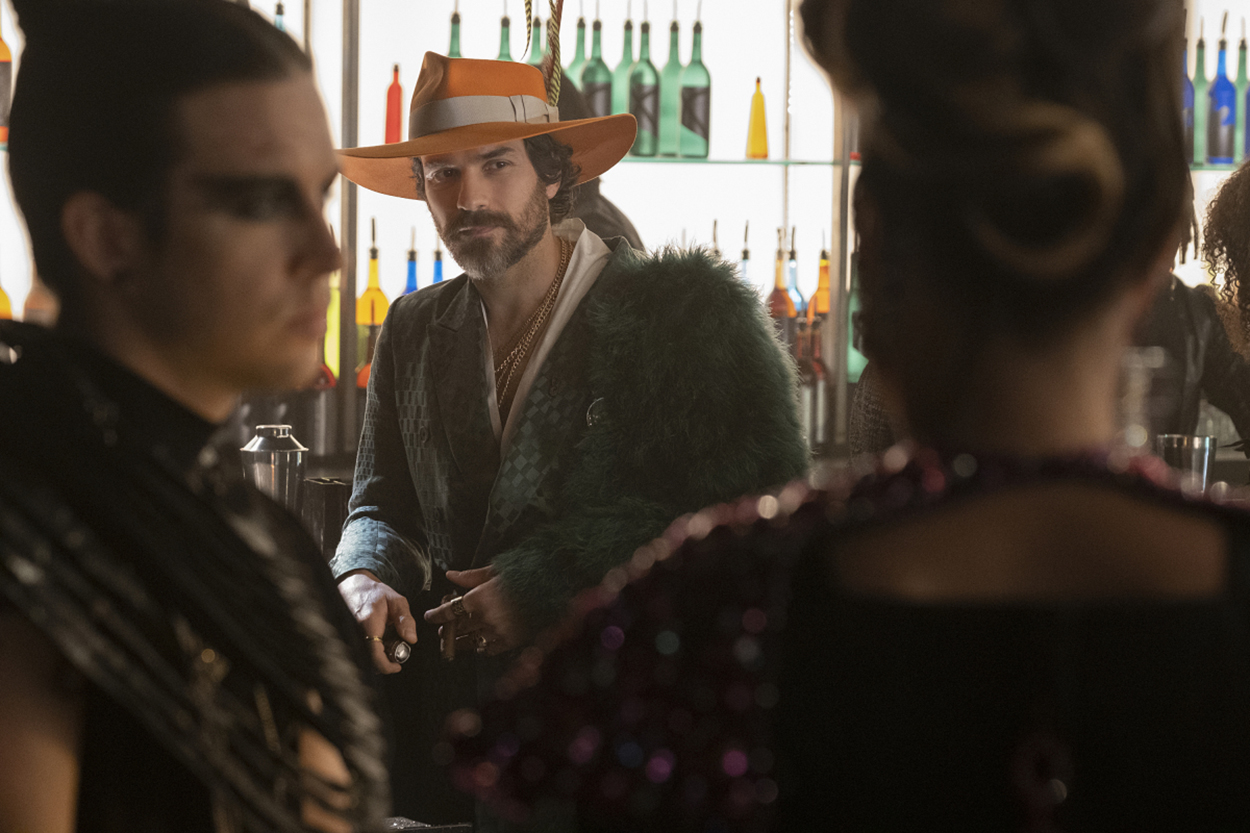 Dr. Maddox has been found, but he’s in the clutches of a crime lord/Borg part trafficker by the name of Bjayzl, captivatingly played by Necar Zadegan. She’s beautiful, she’s ruthless and cold-blooded, and Maddox owes her money. Turns out, the Tal Shiar has paid Maddox a visit and destroyed his lab, leaving him in arrears to our lovely Bjayzl. And that’s where our crew on La Sirena is headed – straight for Maddox and her captor. It’s interesting to me that the Tal Shiar (Zhat Vash) has chosen this moment to move. The creation and appearance of Dahj and Soji has apparently sent the alarm bells chiming, setting so much of this in motion.

What we don’t know until later is that Bjayzl and Seven of Nine know each other. They were involved in a relationship that proved to be very one-sided. Bjayzel used her intimacy with Seven to hunt down and disassemble another Borg (Icheb, another blast from the Voyager past) in a grisly and horrible manner, forcing Seven to kill him to ease the pain. It’s an experience that Seven, who now is a Ranger, has never forgotten. The man killed she refers to as the only “Kin she ever had,” and we see that she hasn’t forgotten the betrayal.

We find out that Borg who were assimilated as youth and have working parts are more valuable. It’s an ugly, bloody trade that Bjayzel in involved in, but she’s good at it and despite her loveliness (did anyone else think they were looking at a young Deanna Troi when she first turned up?), there’s a coldness that she exudes.

In the end, Seven’s journey to FreeCloud is less about helping Picard and more about exacting revenge on her former lover. And that, my friends, is what she does. You know, I read some comments from Jeri Ryan about trying to rediscover Seven’s voice when she got the script for her return and I think she’s done a tremendous job of infusing our Seven with so much of what made her interesting when we first got to know her. 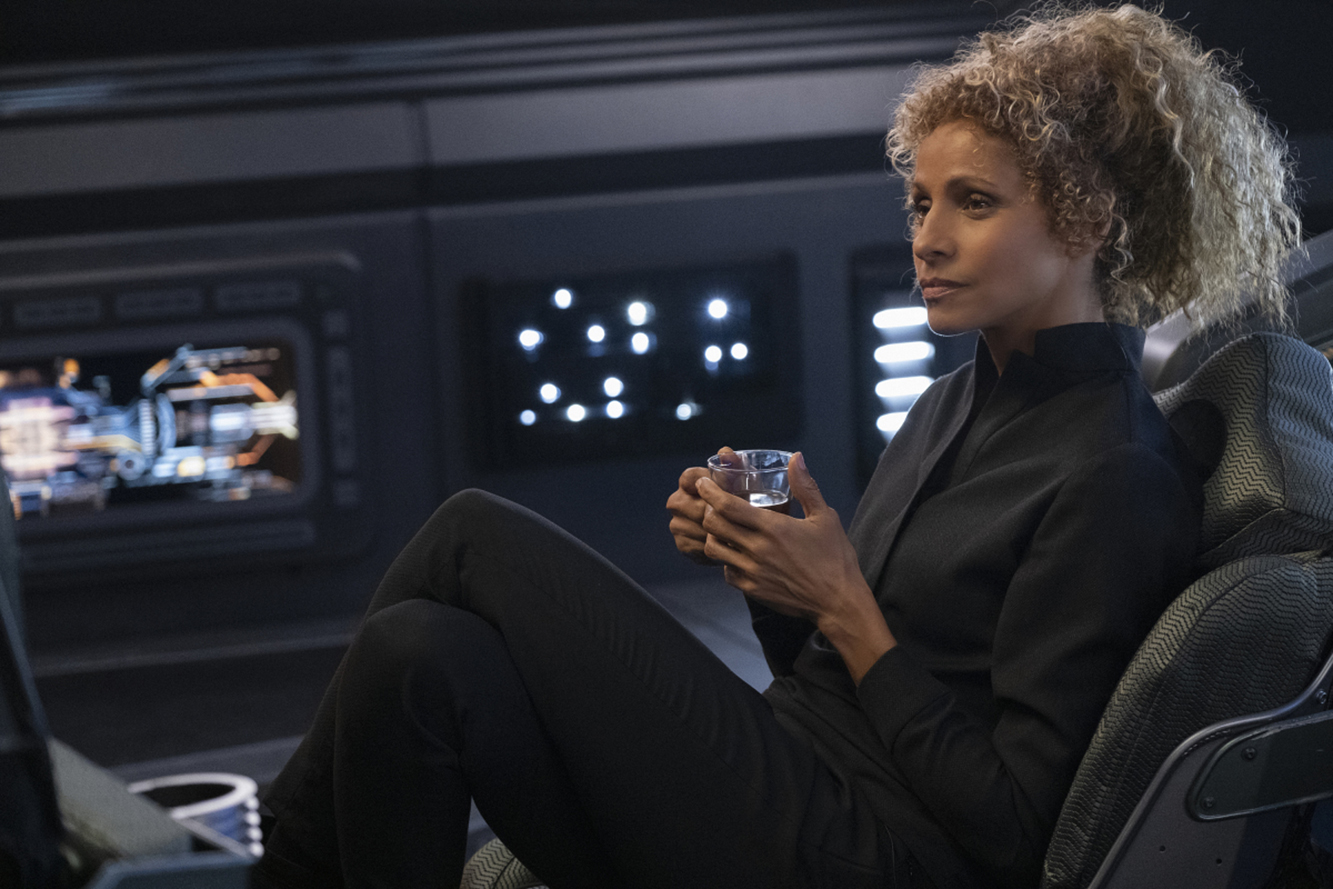 Michelle Hurd as Raffi in episode 105 of Star Trek: Picard.

She has progressed, she has learned, she has established an identity in this new life she’s created, but admits to Picard that all of her humanity has not returned. Picard notes that he feels there’s still something missing after his assimilation. An interesting and poignant moment between two people who have a Borg commonality. Still, watching Ryan bring us a Seven that isn’t in it for the glory, just the gory, is pretty fun.

She saves the gang after their retrieval of Maddox, but immediately heads back down to re-confront Bjayzl and dispatches her guards and finally, her former love. It was cold, calculated and brutal. If Seven has learned nothing in her re-humanization efforts, she has learned the desire for revenge. And she exacts it wonderfully. I don’t know if we’re going to see Seven again, but I really appreciated Jeri Ryan’s foray into Star Trek: Picard and not only the flash of joy past, but the growth and change of Seven right now. I hope we see her again.

The plot to rescue Maddox is pretty standard – trade Seven for Maddox. Seven should be irresistible for a Borg tech businesswoman. Along the way, our heroes give us a bit of flamboyance as Rios goes all Huggy Bear, Picard does his best Dread Pirate Roberts (with requisite eye patch and French accent), and Elnor just gets to look confused, but cool as he accompanies (You can see Elnor has a youthful naivete going on. I hope he has more to do in coming episodes, however). It’s a fun little run of a scene as the negotiations go on and we head toward the realization that Seven knows Bjayzl.

While this all goes on, Raffi gives us a little more insight into just how far down the toilet her life spiraled after her firing from Star Fleet. She’s been fighting a bit of a drug addiction and we discover she has a son that she’s estranged from. Turns out, while she spiraled down, she essentially quit on her hubby and son. The resentment of the son is palpable and intense as Raffi finds him and his newly-pregnant wife. 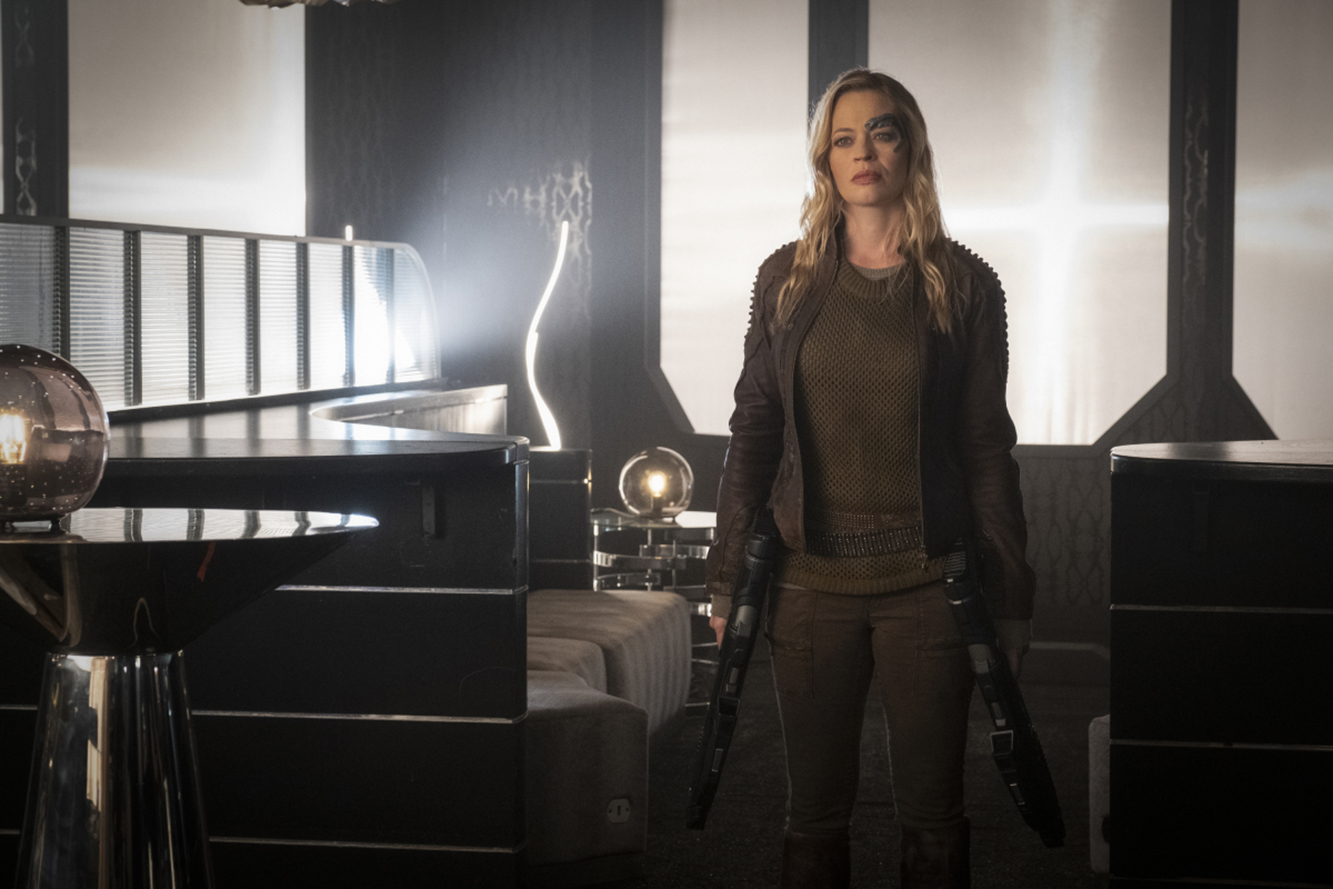 She wants to make amends of some sort, but her boy ain’t having it. Michelle Hurd really delivers a nice performance here as a woman who knows she’s screwed up and is desperate for a lifeline from her son. It’s uncomfortable, sad and kind of horrible to watch Raffi appear so desperate for a kind word. Hurd really delivered some quality right here. I felt for her so deeply.

Sadly, her son dismisses her and when next we see her, she’s back aboard the ship, but sealed in her room. Feels like this is a turning point for Raffi – in a lifetime of poor decisions at key turning points the last 14 years. I will be curious, when she finally emerges, what kind of Raffi we will have moving forward.

But perhaps it was Agnes Jurati that delivered the most surprising and unexpected reaction in this episode. Of course Picard and his crew got away with Maddox (thank you, Seven) and brought his beaten and bloody self to the ship. It would appear that the first key to the saving of Soji has been turned. Adding to all of this is that we get a glimpse into the relationship betwen Jurati and Maddox, a relationship that was more than just professional. They were involved, so it’s clear that Jurati is dealing with her own brand of pain from the past, as well as explained why joining the search for Maddox was so important for her.

But the happy reunion had an ugly and shocking twist. Turns out, Jurati may be a little more stout of heart than she lets on – or at least found the motivation behind what she did to be so great that it emboldened to greater heights than her nervous little outsider often depict on La Sirena. With tears in her eyes, and no one else around, she uses the medical equipment to kill Maddox. She mentions how she wishes he could know what she knows and have seen what she’d been shown as he slowly dies. What has Jurati heard and seen – and from whom? 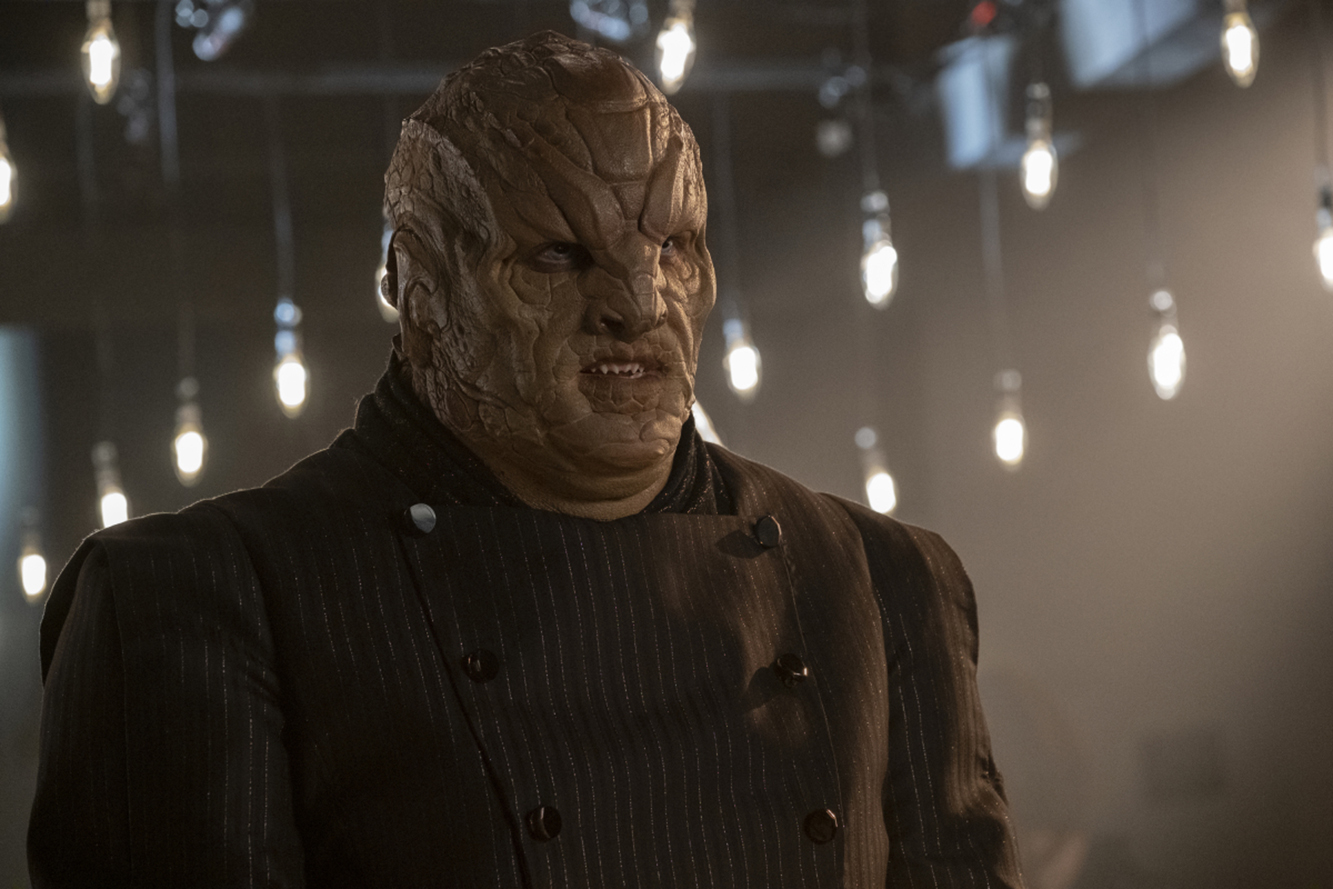 Was it during that visit from Commodore Oh? The way she talked, you have to wonder if she’s now Zhat Vash? What could be so transformative, so compelling, to convince her to kill a man she obviously loved after he’d been missing so long? Is she something other than what we see, perhaps? Feels as though we are playing out the “needs of the many outweigh the needs of the one.”

Should be interesting to see how Maddox’s death is viewed and whether Jurati’s complicity in that death is discovered. If so, what’s the fallout from it? Fortunately, in a moment with Picard, Maddox was able to tell our captain that Soji was sent to the “Artifact,” the old Borg cube in Romulan space. She and Dahj, it turns out, were created and sent their separate ways to get at the truth of the Synth attack on Mars and the depths to which the cover-up extends – from Romulans to the Federation.

Maddox knew, Raffi knew and Picard now knows – there are elements within Star Fleet that are working directly with the Romulans, the Tal Shiar and Zhat Vash. The specter of “the destroyer” seems to be this continual haze in the distance that is now pulling many elements toward it. All roads lead to the Borg cube and Soji. When everyone meets up, it should be very, very interesting.